This past weekend, as Hurricane Irma battered Florida from coast to coast, hundreds of thousands of South Floridians boarded up their windows and fled to shelters, desperate to escape massive flooding and falling debris. But amid the chaos, one Miami native a victim to the elements: Miami Seaquarium's 21-foot-long blackfish, Lolita the orca.

As powerful winds drove waves against the Rickenbacker Causeway and sailboats washed ashore, Lolita was abandoned in a naked tank that was less than four times her body length and covered only by a flimsy tin roof.

Lolita has lived at the Seaquarium for 47 years and came from a population of orcas that been listed as endangered since 2005.

"She should have been moved, no questions asked," former SeaWorld trainer Dr. Jeffrey Ventre says. "It was criminal animal negligence or animal cruelty."

No one at Seaquarium was available to respond to Ventre's claims or to describe what hurricane preparations had been employed to ensure the safety of their animals, nor was it immediately clear whether staff members were present at the facility to attend to the animals. After the storm, Seaquarium released a tweet, claiming all animals were safe. Many commenters have criticized the photo as an old, reused image from before the storm.

#HurricaneIrma Update: Our animals and our team are safe. Thank you for your support as we continue to assess the park and provide updates. pic.twitter.com/BhRwH7OUza


Days later, the facility also posted this video on its Facebook page after the storm reiterating that all animals were OK.

Even so, Ventre contends Lolita was likely vulnerable to any number of potentially fatal injuries during the storm: missile injury from flying debris, blunt force trauma, extreme stress and PTSD, and exposure to highly contaminated floodwater. He describes two worst-case scenarios: The stadium roof could have collapsed into the tank, meaning Lolita could have been sliced, crushed, or trapped underneath. Also, the storm surge could have undermined the glass of her pool, causing it to shatter and injure the isolated animal.

Drone footage captured by local orca activist Lincoln O'Barry after the storm showed Lolita alive, swimming in murky water. Ventre fears that water pumps might not have been filtering the water in her pool: "It looks like she's swimming in a cesspool," he says.


Drone photo of Lolita at the Miami Seaquarium taken today by Lincoln O'Barry. She appears to have survived but the police caught O'Barry. pic.twitter.com/hGwH9rQi2z

Since the images were released, many critics have said Lolita should have been moved to a different facility. "They could have put her on a stretcher, moved her to a truck, and then taken her to SeaWorld," Ventre says. "It's a bunker compared to the Miami Seaquarium."

Ventre says killer whale transports are routine, particularly in times of natural disaster. Claiming these animals will get sick, he says, is a lie. He says Lolita staying in Virginia Key was the worst possible choice for her well-being during Irma.

Video footage from O'Barry shows the Seaquarium sustained damage and flooding. "If [the Seaquarium] has no plan or protocol during a storm other than leaving her behind, then Lolita shouldn't live there," O'Barry says. "It's a death sentence."

O'Barry adds that regardless of whether Seaquarium staffers stayed on the premises to supervise the animals' well-being or not, Lolita should have been transferred to a safer location. "Even if they had 50 people there, what are they going to do with hundreds of thousands of pounds of animals?"

For decades, O'Barry's organization, Dolphin Project, along with other local animal activist groups, have been advocating for Lolita's retirement to a natural sea pen — what O'Barry considers a more humane and safer option than her current captive state. "It’s inherently hypocritical to keep a large-brained, gregarious, sonic animal in a concrete box. It needs to end." 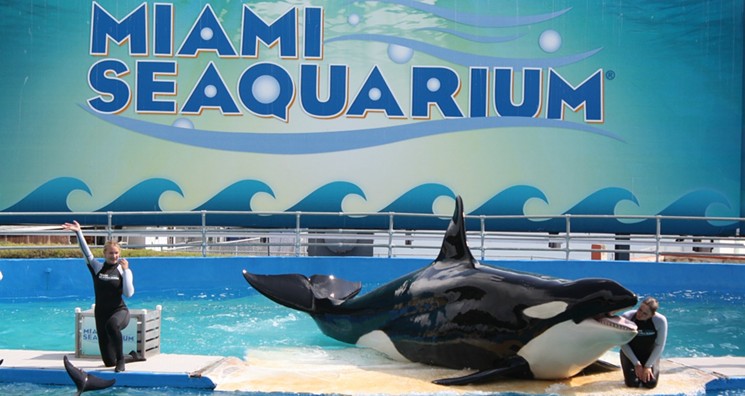 Leonardo DaSilva via Flickr Creative Commons
This past weekend, animal control officers in Palm Beach County rescued 49 dogs and two cats that were tied up, restrained in a backyard pen, and abandoned by their owner. Immediately, State Attorney Dave Aronberg called it "a prime example of animal cruelty" and promised to prosecute any pet owners who left their animals outside in the storm.

Unfortunately, it seems Lolita won't be offered similar justice, Ventre says. According to him, the Animal and Plant Health Inspection Service (APHIS), which is in charge of enforcing animal welfare laws, let Seaquarium get away with leaving Lolita exposed during a storm. "Lolita was like a tied-up animal during the storm, but I'm not confident with APHIS doing anything."

“Seaquarium says, ‘Our animals are part of our family,’ but I don’t know of anyone that left their family behind [in Irma]," O'Barry says. "Their bottom line is profit."

Update: An earlier version of this story did not include the above video showing Lolita swimming in an apparently clean tank.