The Ten Best Beaches in Miami 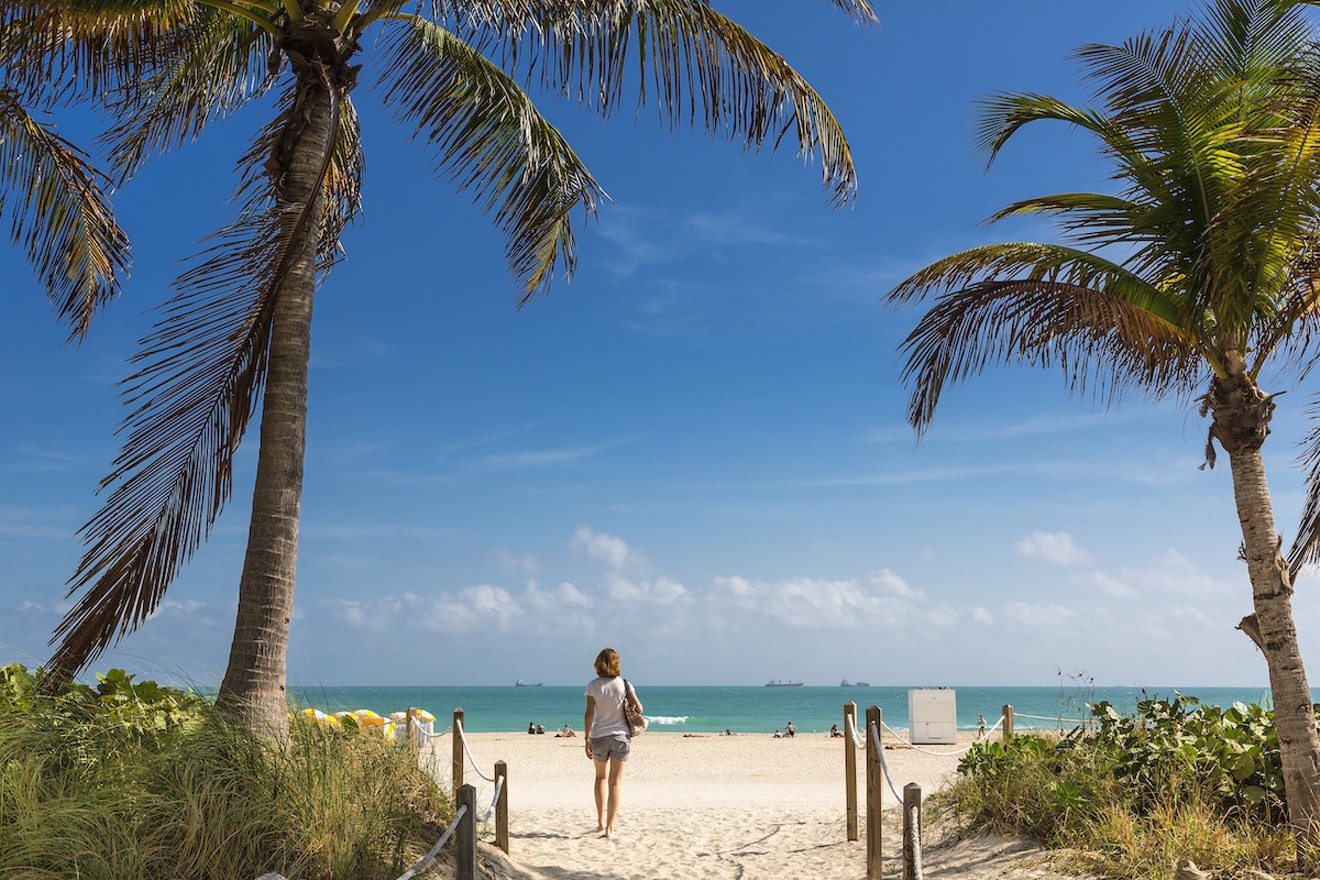 Paradise is closer than you think. Photo by Sylvain Sonnet/Getty Images
Say what you want about Miami's heavy traffic, oppressive humidity, and its residents' penchant for lateness. The city is a coastal metropolis with some of the most beautiful beaches in the nation and, and at a stretch, the world. Whether you're looking for eco-adventures or a day luxuriating on white sand with a White Claw in hand, plenty of options await eager beach hounds. 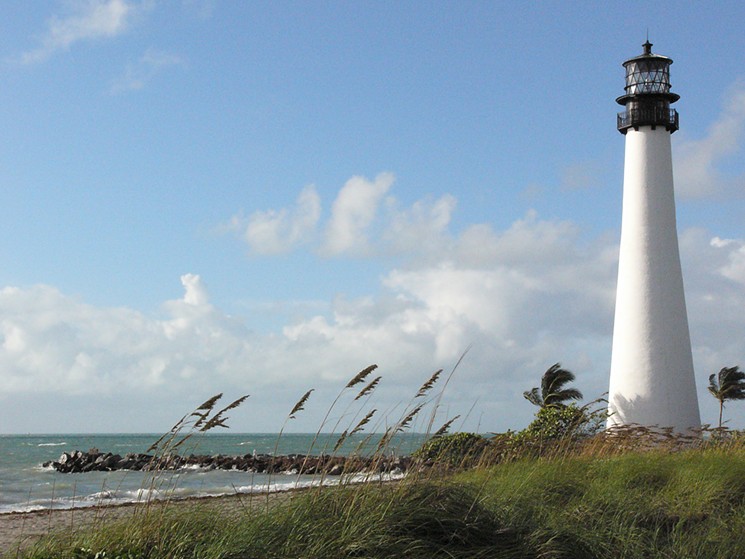 Are you in Maine? Nope, you're still in South Florida.
Photo by Michael DeAngelis

1200 S. Crandon Blvd., Key Biscayne
786-582-2673
floridastateparks.org
At the southernmost tip of Key Biscayne is a picturesque seaside scene that could pass for a tropical version of Maine. Once parked at Bill Baggs Cape Florida State Park, beach-goers must pass through a canopy of trees to reach their sandy oceanside destination, complete with the historic Cape Florida Lighthouse, which was built in 1825. Take in the views from your towel, or if you're feeling adventurous, climb to the top of the lighthouse for a panorama view of the surrounding park and ocean. Once thoroughly sun-soaked, head to the Lighthouse Cafe for a bite or grab a cocktail and catch the breathtaking sunset views at the newly renovated bar, the Cleat, located at the southern tip of No Name Harbor, a short walk or drive from the lighthouse. Entrance costs $8 per vehicle. Open daily from 8 a.m. until sundown. 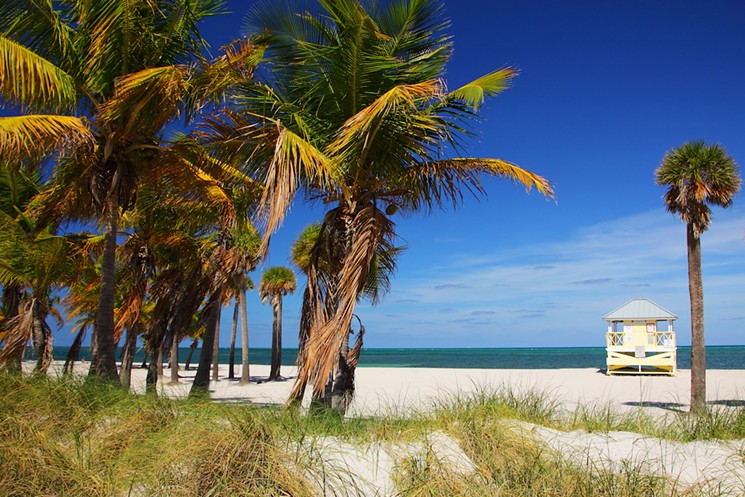 6747 Crandon Blvd., Key Biscayne
305-361-5421
miamidade.gov/parks/crandon.asp
Crandon Park Beach boasts some of the clearest waters Miami has to offer, thanks in part to a strict ban on floatation devices and its offshore sandbar — itself an idyllic place to bask like the Floridian lizard you are at heart. Not to worry though, there’s plenty else to keep the whole family entertained, including unique eco-adventure experiences, picnic and cookout areas, and concession stands. If the sun becomes too much, head to the Family Amusement Center open on weekends and holidays only to check out its restored carousel, beachfront playground, and splash fountain. Entrance costs $5 per vehicle on weekdays and $7 on weekends. Open daily from 8 a.m. to sundown. 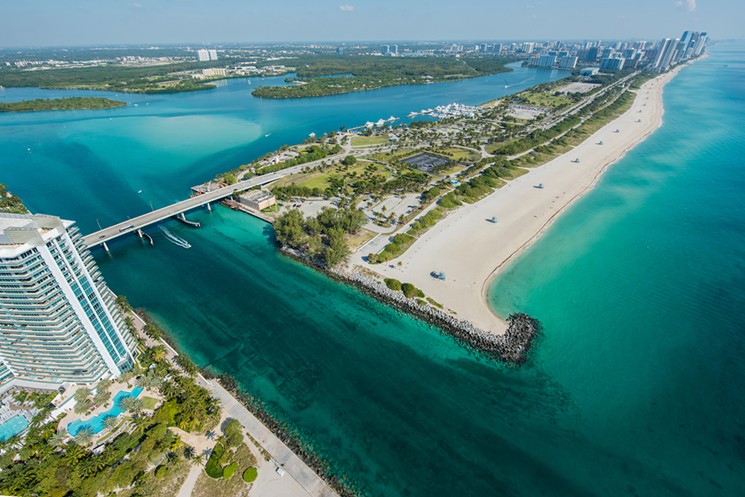 Take it all off or keep it all on at Haulover.
Photo by Armando Rodriguez

10800 Collins Ave., Miami
305-944-3040
miamidade.gov/parks/haulover
Get rid of those stubborn tan lines once and for all by heading to the section of Haulover Beach Park (between lifeguard towers 12 and 16) that proclaims to be the "top clothing-optional beach in the United States." But even the staunchest nudist may be tempted to dress to head south, between lifeguard towers 2 and 3, to hang out with some beachy pups at the park's dog section. From 8 a.m. to 3 p.m., the area is a pup playground, allowing your four-legged friends to frolic in the surf, cool off in style, and play in the Bark Park, which is open from 8 a.m. to sunset. Entrance costs $5 per vehicle on weekdays and $7 on weekends. Open daily from 8 a.m. to sundown. 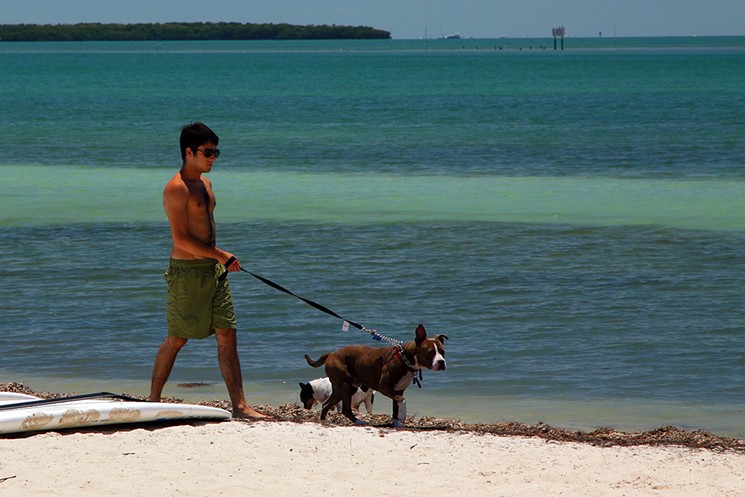 3501 Rickenbacker Cswy., Miami
305-361-2833
Calling all dog lovers: Hobie Beach is for you. The shallow and relatively calm waters make it the perfect location for your fur babies to have a carefree splash. If you’re feeling generous, you can even give them a bite of your arepa from the nearby concession stand. Lined with palm trees, there's always a place to cool off in the shade after a frolic in the sun, but if you’re feeling adventurous, you could opt for a parasailing session from nearby Miami Watersports for $110 per person. Admission is free. Open daily 7 a.m. to 8 p.m. 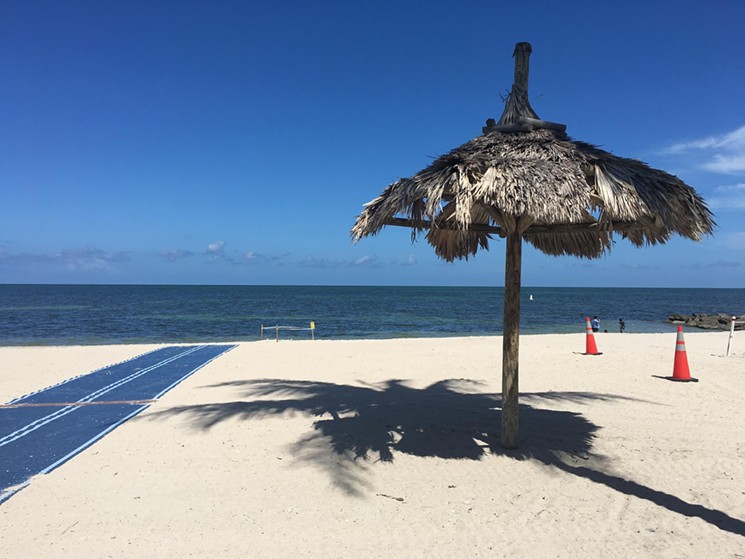 The city feels far away at the Historic Virginia Key Beach Park.
Photo by Jessica Gibbs

4020 Virginia Beach Dr., Miami
305-960-4600
virginiakeybeachpark.net
It's hard to believe this tropical retreat with crystalline water is just minutes away from Miami’s bustling financial center, Brickell. Yet just over the Rickenbacker Causeway lies the Historic Virginia Key Beach Park. Its impressive network of coastal hammock trails; shaded pavilions; kayak, bike, and paddleboard rentals means you won't be hard-pressed to keep the whole family entertained and relaxed in this little slice of Miami paradise. Entrance costs $5 per vehicle Monday through Friday, $8 per vehicle on weekends. Open daily from 7 a.m. to sunset. 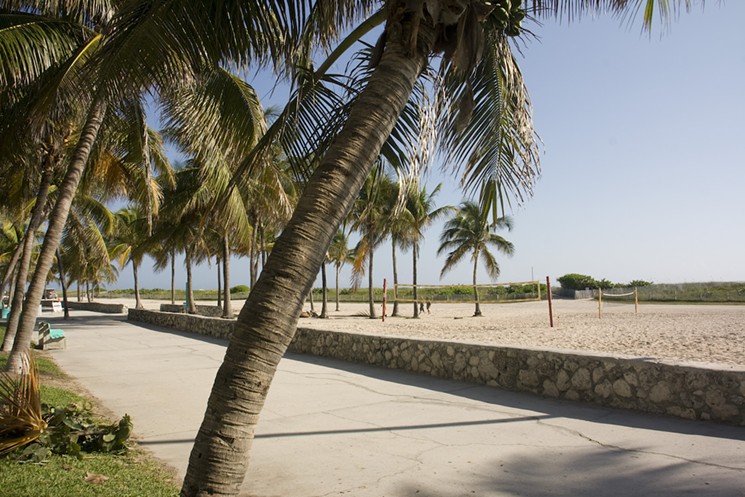 It's a tourist destination for a reason.
Photo by Cris Ascunce/Greater Miami Convention and Visitors Bureau

1130 Ocean Dr., Miami Beach
miamibeachfl.gov
When you’re dreaming of Miami, you're dreaming of Lummus Park Beach, a postcard-perfect spot surrounded by historic art deco buildings, high-end hotels, a winding beachfront walkway, and bronzed athletes playing volleyball games on the sandy courts. This beach is full of action and a favorite among tourists looking for the full Miami experience (Muscle Beach and frozen margaritas included). At the heart of Lummus Park, find Miami Beach's LGBTQ+ beach located at the intersection of 12th street, a hotspot during Miami Beach Pride and identifiable year-round by the rainbow flags at each lifeguard station. Admission is free. Open daily from 7 a.m. to sundown. 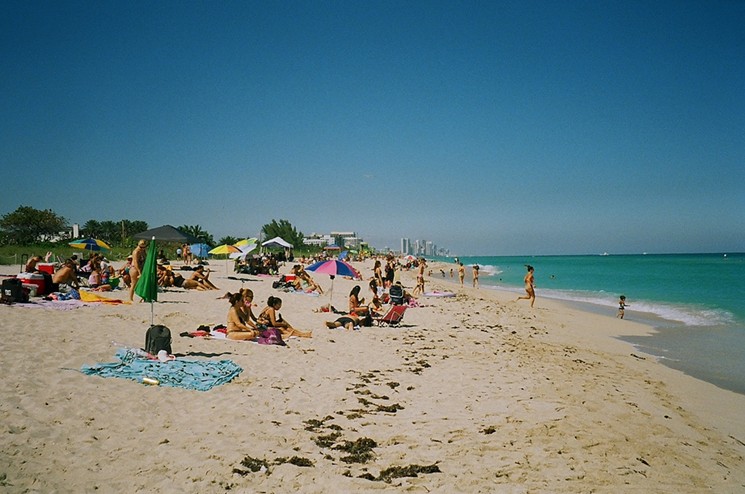 North Beach Oceanside Park continues to be a favorite among the locals.
Photo by Phillip Pessar/Flickr

8328 Collins Ave., Miami Beach
305-861-3616
miamibeachfl.gov
For a more chilled beach day option, head to North Beach Oceanside Park, a serene destination, out of the way of the hustle and bustle of Miami Beach’s hotels and restaurants. Pack your cooler to the brim, bring a Pub sub, and take in the blissful scene of the Atlantic Ocean. The park also features shaded walking trails, a bike path, and a dog park and playground to entertain the kids and fur babies. For those planning a get-together, set up at the nearby picnic pavilions with barbecue grills. Admission is free. Open daily from 7 a.m. to sundown. 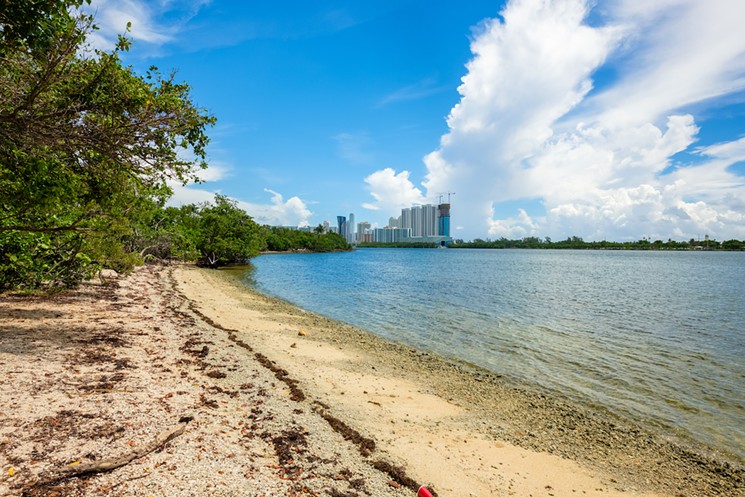 3400 NE 163rd St., North Miami Beach
305-919-1846
floridastateparks.org
The sprawling 1,043-acre park that hugs Biscayne Bay is a one-stop shop for a day of outdoorsy adventure. Rent kayaks and canoes at Roam, Oleta’s outdoor center, starting at $30 for 90 minutes for a single kayak, and paddle through mangrove trails or head to shore once you find a perfect beach spot. If you opt for a bike rental, keep a lookout for manatees and native bird species as you cycle along paths shaded by tropical shrubbery. Entrance costs $6 per vehicle or $4 for single-occupant vehicles or motorcycles. Open daily from 8 a.m. until sundown daily. 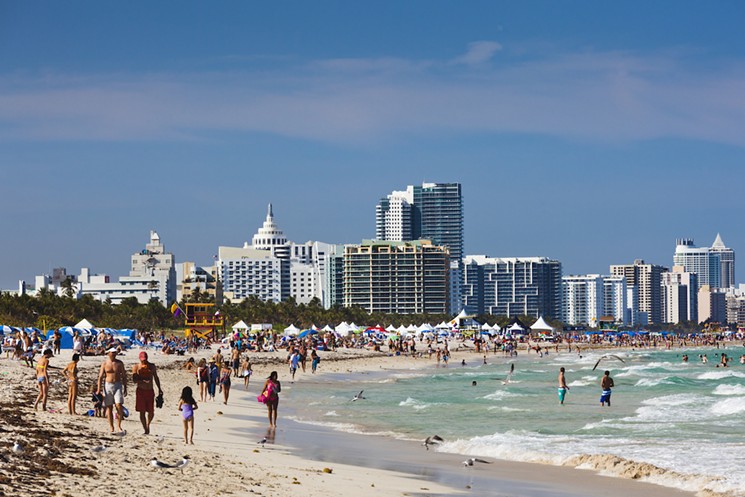 At the tip of the barrier island you'll find South Pointe Park and the nearby beach.
Photo by Walter Bibikow/Getty Images

1 Washington Ave., Miami Beach
305-673-7779
miamibeachfl.gov
“It's the journey, not the destination,” they say, and they may well have been talking about South Pointe Park. The only access to the beach is through the stunningly landscaped green park, featuring wide walkways and an ocean-themed children's playground. Take a walk along the pier for views of the Atlantic Ocean, Government Cut, and Fisher Island. Once you’ve worked up an appetite, head to the iconic Smith & Wollensky steakhouse, a stone's throw away from the beach, known for its steaks and seafood available for dine-in or carry out. Admission is free. Open daily from 7 a.m. to sundown. 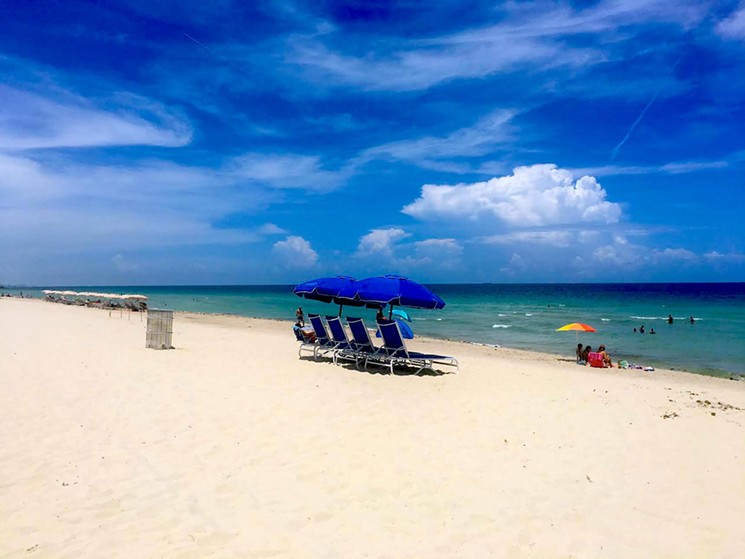 Travel back in time at Surfside Beach.
Photo by Jessica Gibbs

Collins Avenue between 88th and 96th Streets, Surfside
305-864-0722
townofsurfsidefl.gov
Dubbed the “uptown beach town,” Surfside is a decidedly quirky beach day option, with a '50s-era beachside feel mostly populated by locals. Head here for its mellow vibes, pristine sand and waters, and afternoon bites at Josh's Deli, a beloved artisanal Jewish delicatessen, or cool off with some frozen yogurt from Serendipity. For amateur fishers, Surfside is also known for its excellent bay and offshore fishing. Admission is free. Open daily from 7 a.m. to sundown.
KEEP MIAMI NEW TIMES FREE... Since we started Miami New Times, it has been defined as the free, independent voice of Miami, and we'd like to keep it that way. With local media under siege, it's more important than ever for us to rally support behind funding our local journalism. You can help by participating in our "I Support" program, allowing us to keep offering readers access to our incisive coverage of local news, food and culture with no paywalls.
Make a one-time donation today for as little as $1.