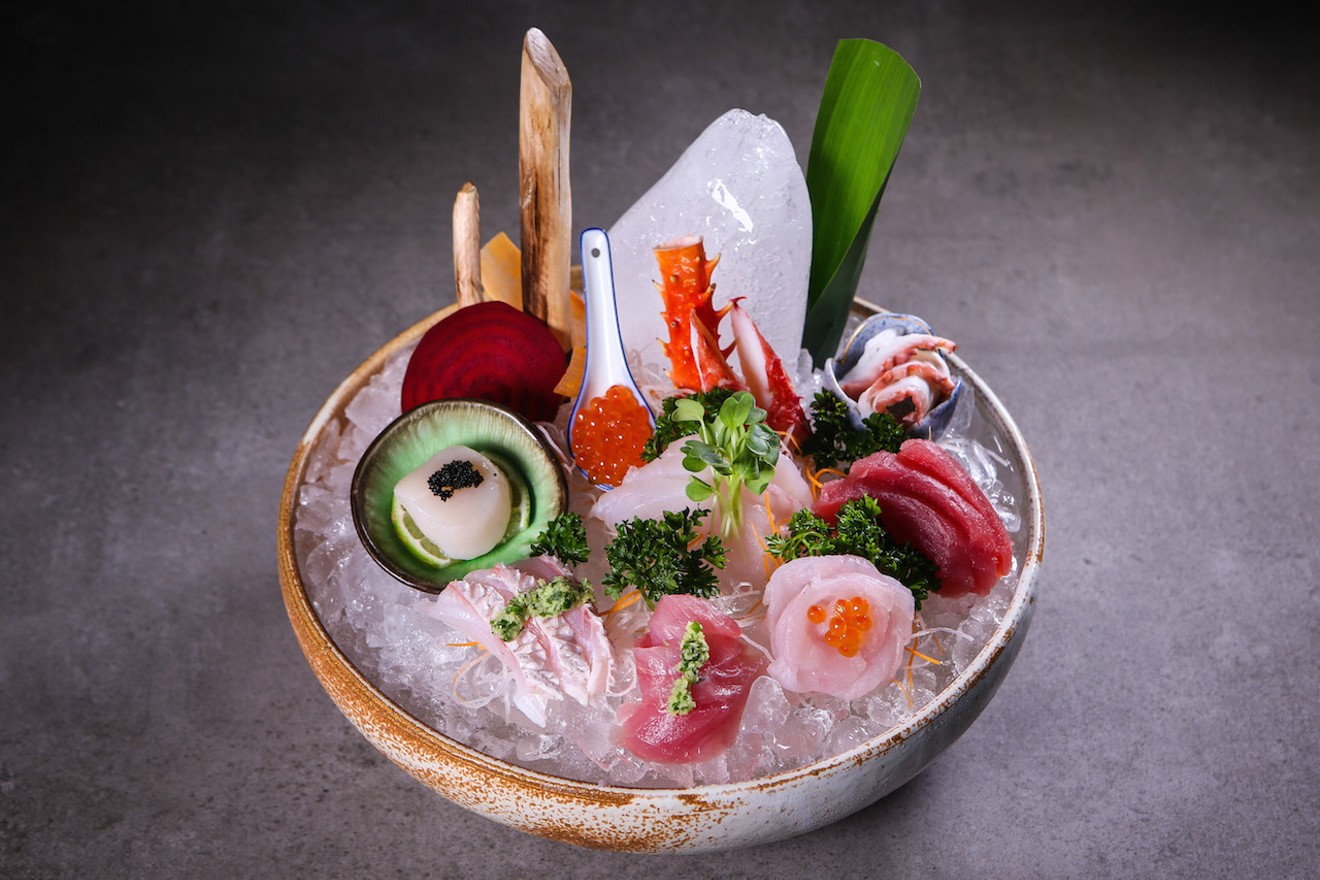 Chef's sashimi at Koushi Miami Photo by Studio Arthur Casas
In Japanese, ko could mean a lot of different things, including "child." It often refers to longevity and happiness. In the heart of Miami Beach's South Pointe neighborhood, ko refers to Kosushi Miami, the first international location of Michelin-starred restaurant Kosushi.

Chef George Koshoji and business partner Carlos Augusto Carvalho opened the flagship location in São Paulo in 1998, after the Brazilian-born chef trained to become a sushi master in Japan. Koshogi's combination of precise technique and delicate presentation, Carvalho tells New Times, is a product of the chef's bicultural identity.

"We marry traditional Japanese techniques with Brazilian flavors and what ties it all together is the quality of the food," Carvalho says. "We have been well accepted in Miami. People who come into the restaurant appreciate the precision of the cut, unique spices, and the quality of the rice."

With Koshoji's list of creations, São Paulo's Kosushi earned its place in Michelin's annual culinary guide from 2015 to 2019. Kosushi Miami debuted last December, after three years of construction and pending city permits. The restaurant shut down at the onset of the coronavirus outbreak and reopened about a month ago. 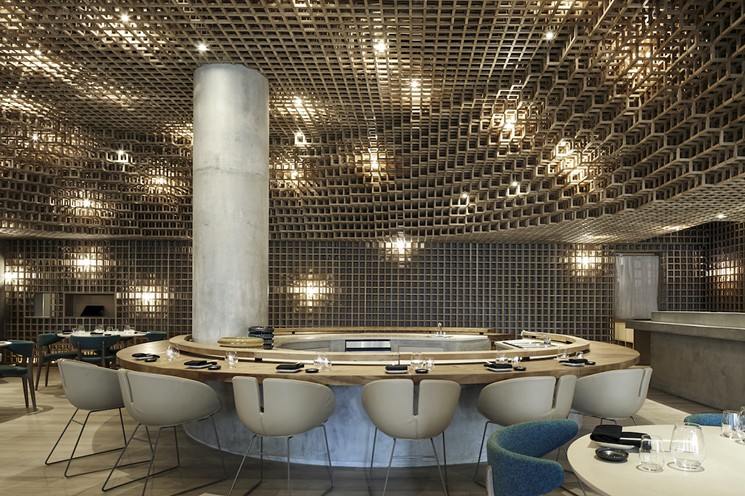 Carvalho says the decision to open in Miami was the result of multiple visits and the realization that an international outpost would allow him to jazz up the restaurant's offerings.

"Our menu is more consistent at the Miami eatery," Carvalho explains. "At our two São Paulo locations, we work with what's available, but in the U.S. products are superior and you can find anything you want."

In South Pointe, Kosushi is helmed by Sayuri Jones and Colombia-born executive chef Edwin Delgado, both formerly of Nobu and Tanuki. The 70-seat space was brought to life from a design from Brazilian architect Arthur Casas. The dining room, executed in a neutral palette, is wrapped in wooden, Lego-like structures that surround a central sushi counter and a bar.

Texture and taste come together in a Miami ceviche maki, filled with shrimp, lettuce, and avocado and topped with yellowtail sashimi, red onion, serrano chilies, and micro cilantro ($21).

A list of desserts — such as nashi toban, made with ginger nashi pear compote, miso caramel, vanilla, and hazelnut crumble ($12); and mochi ($10) — rounds out the menu.

The bar and beverage program, from Brazilian mixologist Marcio Silva, offers an extensive list of sake, wine, beer, and cocktails such as a signature Moscow mule made with pear purée and yuzu  ($16).

Carvalho says future plans for Kosushi Miami include an outdoor area and a to-go concept, Ko by Kosushi, which was born during the pandemic and which he says is delivering more than 200 meals to São Paulo residents each day, on average.

Kosushi Miami. 801 South Pointe Dr., Miami Beach; 786-647-7272; kosushi.com. Thursday through Tuesday 5 to 10 p.m.
KEEP MIAMI NEW TIMES FREE... Since we started Miami New Times, it has been defined as the free, independent voice of Miami, and we'd like to keep it that way. With local media under siege, it's more important than ever for us to rally support behind funding our local journalism. You can help by participating in our "I Support" program, allowing us to keep offering readers access to our incisive coverage of local news, food and culture with no paywalls.
Make a one-time donation today for as little as $1.
Juliana Accioly
Contact: Juliana Accioly