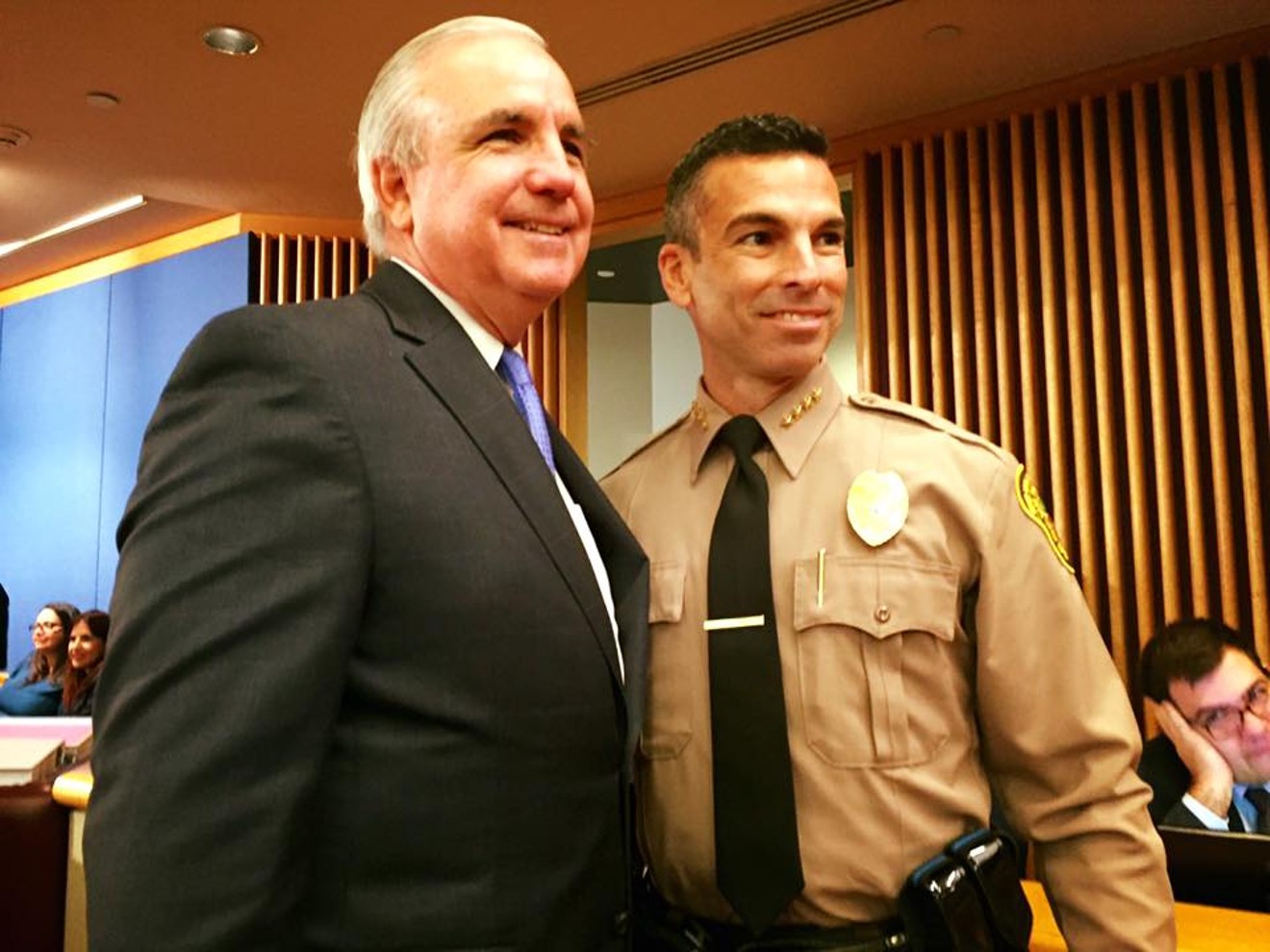 Miami-Dade County Mayor Carlos Gimenez and MDPD Director Juan Perez. Miami-Dade County Police
Miami's relatively small cadre of reporters spent the entire week struggling to cover a horrific school shooting in Parkland. The entire nation has been preoccupied with debates about gun control, politicians have spent most of the past few days reacting to news from Marjory Stoneman Douglas High School, and typical news "beat" reporters have been shuffled around to cover the shooting news round-the-clock since Wednesday.

So what did Miami-Dade County Mayor Carlos Gimenez do while the public's mind was elsewhere? He vetoed the creation of an independent police-oversight panel that would have let civilians investigate complaints against Miami-Dade Police officers.

Miami Herald county-hall reporter Doug Hanks broke news of the veto yesterday at noon — the mayor's spokesperson, Michael Hernandez (who will soon leave his post for a cushy private gig), did not respond to a message from New Times yesterday afternoon asking why Gimenez couldn't have waited until at least next week to announce the news.

"I am vetoing this legislation because I am not entirely convinced that there is a need for an Independent Community Panel," Gimenez wrote in an order issued after 11 a.m. yesterday. "The county already has numerous internal mechanisms and external agencies that oversee and investigate complaints against any County employee or agency."


Mayor Gimenez issues a RARE veto to block reviving Miami-Dade's civilian review panel on police officer conduct. (Board could review any employee conduct) But he also says he'd support a board w/ a different set up. pic.twitter.com/97wzjrsImx

Miami-Dade County previously operated an "Independent Review Panel" from 1980 through 2009 that investigated civilian police complaints until it was shuttered during a budget crunch the housing crisis. Nearly all major police departments of MDPD's size (MDPD is the eighth-largest force in America) operate some sort of civilian-complaint board. (Police internal affairs departments are known nationally for failing to investigate even basic misconduct complaints against cops.)

MDPD cops, naturally, hate the idea of having one: Despite the fact that the department gets sued on a near-constant basis for alleged misconduct and killed an unarmed suspect last August without offering any sort of apology, MDPD Director Juan Perez stood in front of the county commission this month and argued there is "no widespread mistrust" of his department and that a review panel was not needed. The county's black residents disagree — and Commissioner Barbara Jordan, a black woman who represents Miami Gardens and Opa-, has fought for years to resurrect the panel.

The commission still passed the measure 7-5 this month — but Gimenez, a former firefighter who remains close with the Dade County Police Benevolent Association, hinted he would veto it. He was even photographed huddling with MDPD union president Steadman Stahl immediately after the vote.


.@MayorGimenez just vetoed the Miami-Dade County Commission’s decision to fund the citizen independent review panel, which would oversee police misconduct. Here you can see him huddling with the police union chiefs as they plot how to stop any measure of accountability for cops. pic.twitter.com/IVz6Zy2ZX9

Gimenez has made a series of decisively right-wing decisions since winning his last reelection bid in 2016 — most famously, he became the first big-city mayor in America to comply with Donald Trump's anti-sanctuary-city order in January 2017. The mayor offered no real explanation for his veto yesterday, except that he simply thinks cops and other county employees have enough oversight already. It's quite literally a personal decision by the mayor not to convene the panel. (Gimenez said there might be conditions by which he'd support a different type of community-review panel, but it's unclear if he's serious or just trying to save face for blatantly doing the police union a favor.)

"There is no greater accountability measure than my own expectations of every single Miami-Dade County employee, and that is why I will continue to hold all County employees and agencies accountable for their actions," he wrote.