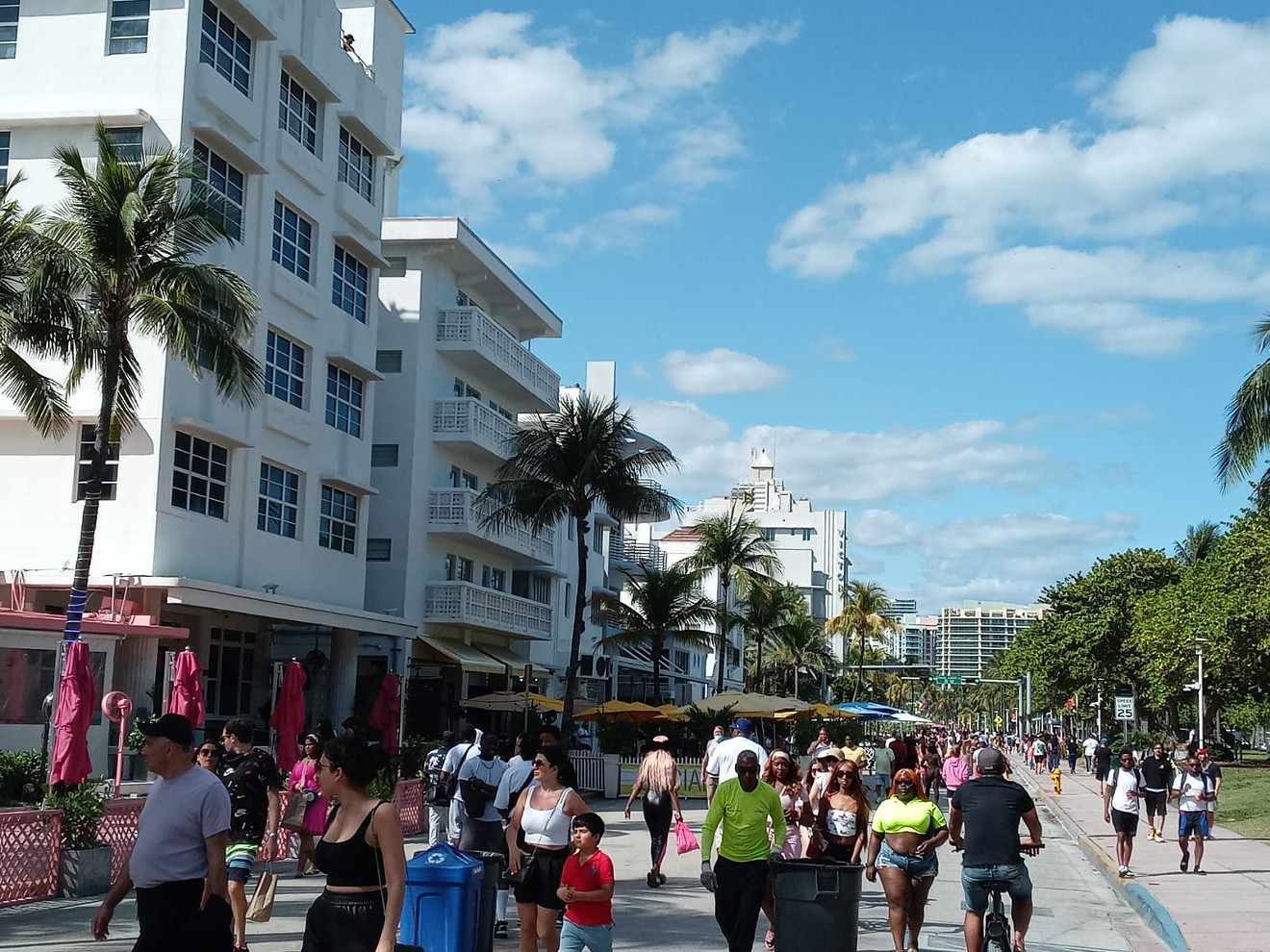 Spring break has seen a large influx of tourists on South Beach's Ocean Drive, sometimes to the detriment of businesses. Photo by Joshua Ceballos
Upon entering Miami Beach from the MacArthur Causeway, an electronic sign on Fifth Street warns visitors: "Loud Music Arrestable." Just a few blocks to the east, vacationers walk along Ocean Drive with stereos and Bluetooth speakers, blaring music and dancing in the street outside the fenced-in dining areas of local bars and restaurants.

Miami Beach is under a state of emergency following an influx of tourists from around the nation for what in a normal year would be spring break. But reports of violence, destruction of property, and traffic obstruction by people twerking on moving cars led Miami Beach to enact an 8 p.m. curfew on Thursdays, Fridays, Saturdays, and Sundays through April 11. The MacArthur, Julia Tuttle, and Venetian causeways will also close to incoming traffic after 10 p.m. on those days.

Some city leaders have attributed the cavalcade of tourists to lax COVID-19 restrictions that Florida Gov. Ron DeSantis has boasted make the state an "oasis of freedom." But the influx has been a double-edged sword for businesses in South Beach.

Some business owners, including Stephanie Vitori, owner of Cheeseburger Baby on Washington Avenue, have welcomed the business from tourists after a yearlong lull caused by the COVID-19 pandemic.

"We've had great volume of business, which has been a positive, because we were hit so bad with COVID, and before that, Hurricane Irma. We're just trying to get back on our feet," Vitori tells New Times.

But for businesses on Ocean Drive, where huge crowds of mostly maskless beachgoers have at times started fights, stampeded through outdoor seating areas, and brandished guns before clashing with police, the costs of the spring break boom are starting to outweigh the benefits.

One manager of an Ocean Drive restaurant, who asked New Times not to use his name, says more people have been dining at his business, but his employees and customers don't always feel safe.

"We've had several stampedes every night, with people toppling over tables and breaking glasses and bottles. I've had employees quit because they don't feel safe, and customers stand up and walk out without paying," he says.

Last Friday, the iconic South Beach haunt the Clevelander announced it would cease food and beverage operations until at least this Wednesday out of safety concerns amid spring break.

This spring-break season, the Miami Beach Police Department made 1,050 arrests from February 3 to March 21, according to a letter from Miami Beach interim city manager Raul Aguila to the mayor and city commissioners. More than half of those arrested came from outside of Florida.

This month, there have been a few reported instances of police shooting pepper balls filled with tear gas to disperse unruly crowds, sometimes prompting large groups to run and seek refuge in open businesses. And police chief Richard Clements described one incident in which a person pulled out a gun and fired it into the air at Ninth Street and Ocean Drive.

Hannah, a manager at Redhead Sandwich on Ocean Drive who asked New Times not to use her surname, says she had to close her restaurant early over the weekend because her employees heard gunshots and didn't want to stay. She's supportive of the city's emergency order and 8 p.m. curfew, even though it cuts into the restaurant's revenues by forcing her to close several hours early.

"We're losing money, but it's good that we're closing up because I need to protect my workers. You can't put a price on safety," she says.

For Vitori, whose restaurant gets a large portion of its business between midnight and 4 a.m., the curfew is only the latest hurdle in a year filled with obstacles to stay afloat.

"This has been the toughest year I've faced since Hurricane Irma. I've never worked this much in my life. I can't tell you how hard it's been," she says.

Vitori understands why the curfew was enacted but feels that businesses on other parts of South Beach often get lumped in with those on Ocean Drive, where most of the issues occur, and suffer consequences as a result.

She says she's had no issues with rowdy tourists on Washington Avenue, but because of the emergency order, she's losing money. Fewer people can come to her restaurant when the causeways are closed, and by relying on delivery apps like Uber Eats and Postmates that charge fees, she can't afford to hire more staff.

"Our business is now 80 percent delivery, and this year I have thousands and thousands of dollars in fees, which could be someone's salary. We're on a complete loss this year," Vitori says.

Joshua Wallack, chief operating officer of Mango's Tropical Cafe on Ocean Drive, says March used to be a long-anticipated time for businesses on South Beach, but recent years have been more chaotic and difficult to maintain.

"What's happening right now is unbelievable. There's too many people and nothing for them to do," Wallack says. "March was always the best month of the year, but now it's something we dread."

Wallack says city officials often blame nightclubs like his own for unruly behavior during peak tourist periods, but he believes that theory no longer applies during the pandemic because fewer clubs are operating. Mango's, for instance, has been closed since last March.

Wallack blames this year's chaos on quarantine frustration and the city's lack of planning and outdoor programming to entertain tourists.

"We need the right, sophisticated programming that would be able to handle large groups of people — like shows and concerts. If you just leave them to have a beach party, there's no order," Wallack says. "If you have a big summer camp with no activities for kids to do, it's a big mess."
KEEP MIAMI NEW TIMES FREE... Since we started Miami New Times, it has been defined as the free, independent voice of Miami, and we'd like to keep it that way. With local media under siege, it's more important than ever for us to rally support behind funding our local journalism. You can help by participating in our "I Support" program, allowing us to keep offering readers access to our incisive coverage of local news, food and culture with no paywalls.
Make a one-time donation today for as little as $1.