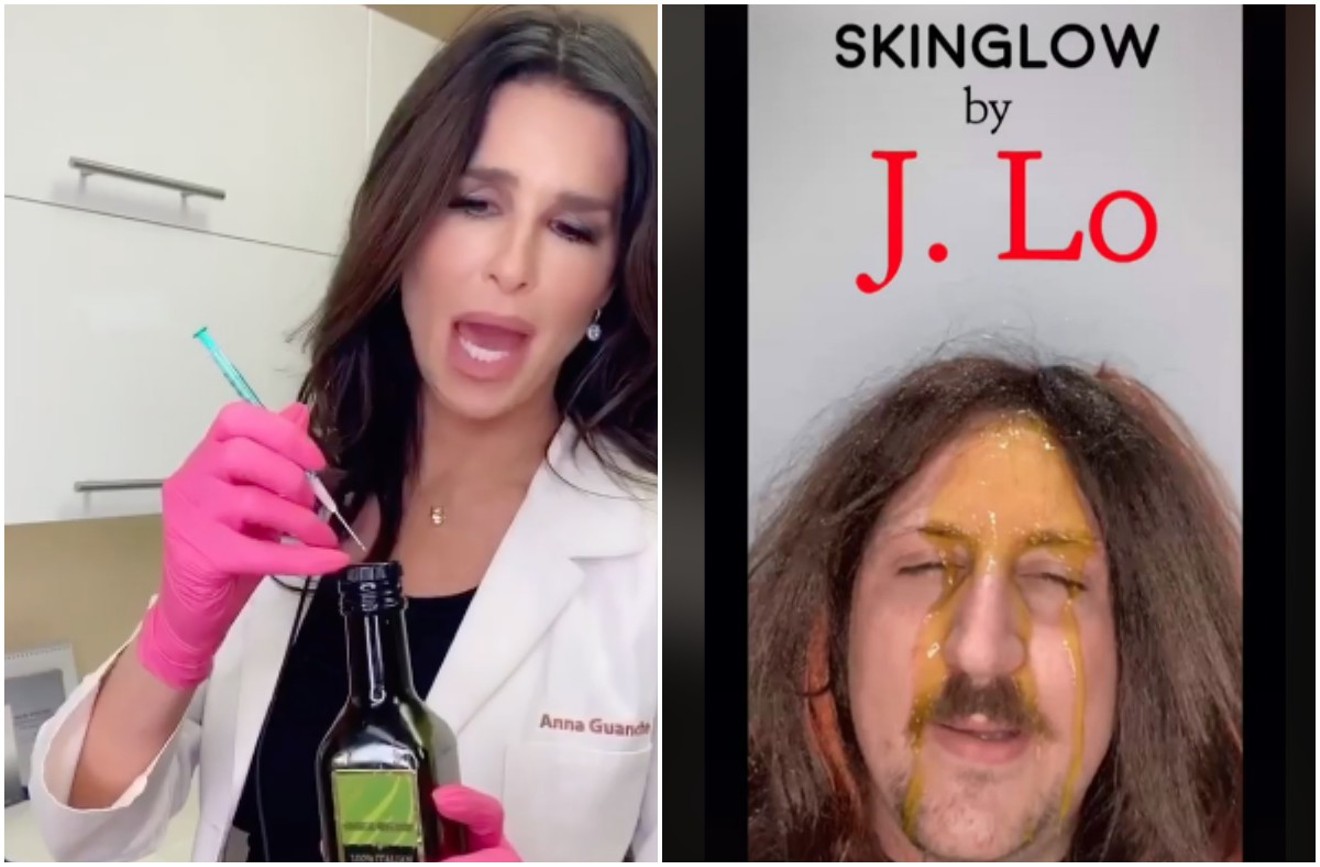 The product launch inspired dozens of memes from celebrity injectors, aestheticians, and other medical professionals. Screenshots via @annaguanchemd/@doctordoublechin
Gloria Estefan might be the First Lady of Miami, but Jennifer Lopez is damn near royalty. When the powers that be at Super Bowl LIV wanted the most 305 halftime show ever, they called J.Lo. She and her husband, baseball legend Alex Rodriguez, just bought a $32.5 million mansion on Star Island. The family spent much of this year isolating at their Parasite-esque home in Coral Gables.

This week, Lopez launched her much-anticipated skincare line, J.Lo Beauty. And in an Instagram TV promo, the 51-year-old revealed the secret to her unbelievably youthful glow: olive oil.

"What I went back to was basically secrets my mom told me when I was young, like how olive oil was kind of a cure-all for your hair, your skin, your nails, your body," Lopez says in the promo, explaining why the pantry staple is a key ingredient in her new product line. "It was like nature's magic ingredient. That's the thing that makes that natural glow."

"Don't forget Botox and fillers!" one person commented. Lopez responded in turn: "sorry baby i haven't ever used them. This is what I use I hope you enjoy. Also a joyful heart helps. [red heart emoji]."

"I haven't ever had Botox to this day," she said in a media Zoom call, according to Page Six. "I'm not that person."

Tanya Patron, a physician's assistant whose South Miami clinic offers injectables and facial treatments, said on Instagram that "as an injector that has at least 15 conversations a day with patients.... Never once have I talked about olive oil."

"She's slick, like as in olive oil slick," Patron said of J.Lo, whom she dubbed "J.L-oil."

Dr. Steven Barilla, better known as Doctor Double Chin on social media, made a TikTok imagining a conversation between Lopez and A-Rod (who, as followers noted, has his own history of denying the use of "injectables").

In the video, Barilla, a New York dermatology resident who studied at the University of Miami, wears a mussed-up, chestnut-brown wig and mocks J.Lo's claim that she's never had work done.

"You know I'd never use Botox — I'm not that person. All I use is that," he says, pointing to a large jug of Costco's Kirkland brand EVOO.

Many noted that Lopez's "I'm not that person" comment seemed to be a value judgment about people who get Botox or other cosmetic treatments.

Patron, the South Miami PA, noted in the comments of her post that it was a missed opportunity for Lopez to be authentic with her fans and realistic about beauty standards and the behind-the-scenes work required to keep up with them.

"If she would have been honest and advocated for the [cosmetic dermatology] industry that has helped her look amazing, we would have been running to get that skincare line!" Patron wrote on Instagram.

Others noted that Lopez has a known relationship with celebrity dermatologist Dr. Harold Lancer.

"And starting her own skin care line after using Lancer as her derm for years for her 'natural beauty.' I'd be at least a little peeved if I was him," Boca Raton dermatologist Dr. Larissa Scanlan commented on one meme.

Ana Cristina Trisan, a Miami physician's assistant who specializes in cosmetic injections, also posted a meme of J.Lo, with the caption: "I've always admired Jlos style but this is [eyeroll emoji]."

In another Instagram promo video, a glistening Lopez poses in front of her $79 multitasking serum and $58 "wonder cream" at golden hour. She looks absolutely breathtaking.

"If you want great skincare and you want that glow, you can have it," she says.

But make no mistake, plebes: the best skincare trick is being rich. Lopez's love might not cost a thing, but looking this good at 51 definitely ain't cheap.
KEEP MIAMI NEW TIMES FREE... Since we started Miami New Times, it has been defined as the free, independent voice of Miami, and we'd like to keep it that way. With local media under siege, it's more important than ever for us to rally support behind funding our local journalism. You can help by participating in our "I Support" program, allowing us to keep offering readers access to our incisive coverage of local news, food and culture with no paywalls.
Make a one-time donation today for as little as $1.