J.Lo and A-Rod Sure Are Having a Blast in Miami's Own Parasite House 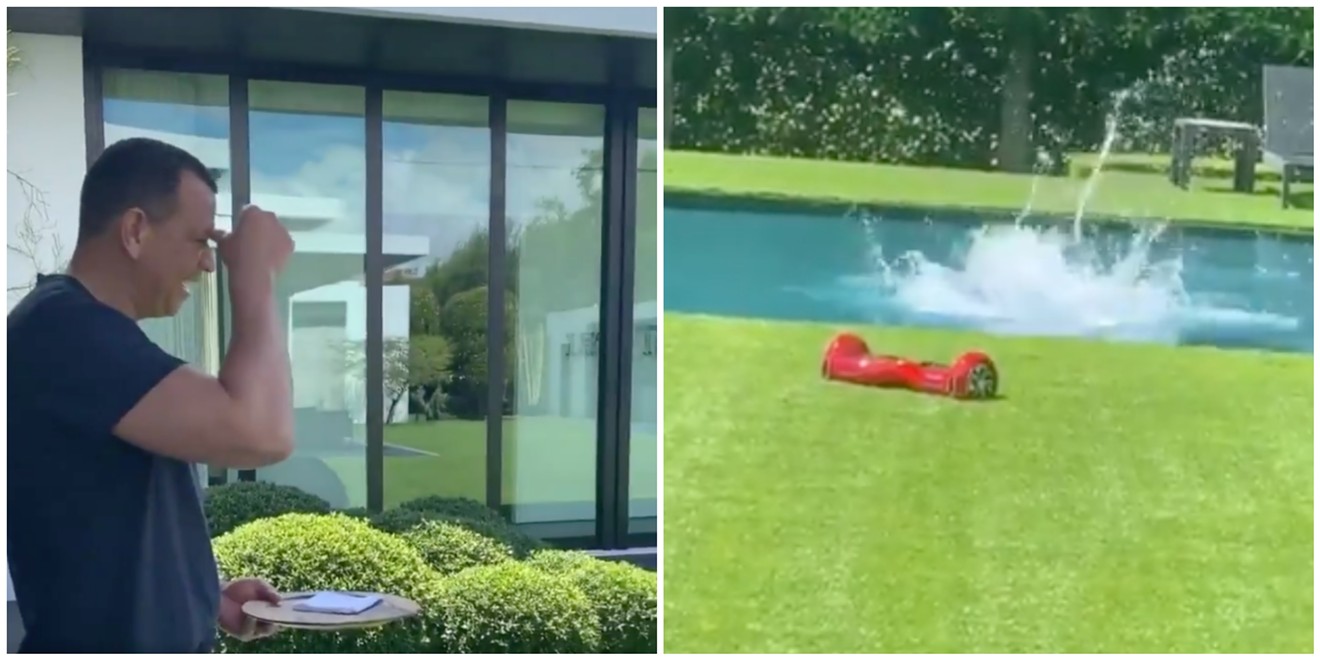 The clip, no matter how short and innocuous, could not encapsulate this moment in America any better. Screenshot via @JLo
As the local economy craters thanks to the novel coronavirus outbreak, many newly unemployed Miamians are stuck indoors all day ingesting a constant stream of increasingly apocalyptic news. There's a lot of time to ponder whether the ceiling feels lower than it ever has. Maybe you've noticed your place has hardly any windows.

Those do not, it seems, appear to be concerns of Miami's millionaire and billionaire class. Case in point: Entertainer Jennifer Lopez and former baseball cheater Alex Rodriguez appear to be practicing social distancing inside Rodriguez's colossal Coral Gables home. According to a 2017 piece in Architectural Digest, Rodriguez paid $2.6 million for the 1.5-acre parcel of land in 2013 and built an 11,000-square-foot mansion on top.

"We can't go out to any restaurants or anything but the service and entertainment here is pretty good... #StaySafe," Lopez tweeted today.

As numerous online commentators have already noted, the place looks almost identical to the house from the award-winning film Parasite, in which the poor Kim family cons the ultrawealthy Park family into letting them take over their lives. The film, in some ways, is a satire about 1-percenters' blindness to the pain and damage late-stage capitalism causes to the world around it. The wealthy Parks seem constantly oblivious to and cut off from the struggles of the low-income people working right under their noses.

The parallels in this video – in which two of the most famous people in Miami are trying to "stay safe" in a luxury compound while people mere miles away worry about making next month's rent or finding food as the economy collapses — are obvious. The clip, no matter how short and innocuous, could not encapsulate this moment in America any better, as two entirely superfluous people in a pandemic — a baseball star and a pop star — live large on princely estates while the rest of us wonder if we'll be able to pay our bills amid the crisis. The people who serve Lopez and Rodriguez in the fancy Miami Beach restaurants they now miss are, as the Miami Herald reported yesterday, being laid off in droves overnight.


We can’t go out to any restaurants or anything but the service and entertainment here is pretty good... #StaySafe pic.twitter.com/K8BnzzB6j6

In fact, some Twitter users have replied to Lopez's tweet today by asking to tutor the couple's children, which is how, in Parasite, the poor Kim family was able to con its way into the Park family's home:


hi are you looking for an art therapist

Glad you're having fun!! pic.twitter.com/50SU8EKt64

For any other Miami celebrities thinking of posting from their warehouse-size mansions with gyms and theaters while the world crumbles around them: Post a check of the money you're donating instead.
KEEP MIAMI NEW TIMES FREE... Since we started Miami New Times, it has been defined as the free, independent voice of Miami, and we'd like to keep it that way. With local media under siege, it's more important than ever for us to rally support behind funding our local journalism. You can help by participating in our "I Support" program, allowing us to keep offering readers access to our incisive coverage of local news, food and culture with no paywalls.
Make a one-time donation today for as little as $1.