Dance the night (and day) away at Miami's best clubs. Photo by Karli Evans
We can fight it all we want, but nothing will change Miami's identity as a party city. As long as it's pumping out great nightclubs like candy, the 305 will be known as one of the world's best places to get wasted.

Honestly, it's something we should be proud of — one of our town's defining features. Everywhere else, things close at 2 a.m. Miamians don't even leave the house till 1 in the morning. Where's a girl supposed to get a drink and watch the in Los Angeles, New York City, or Chicago?

Whether you're looking to get down and dirty, go all night and into the next day, or Instagram yourself looking better than everyone else, Miami has the perfect party scene for you and your fabulous friends. Here are our ten favorite dance clubs, and though these only scratch the surface, they're definitely the must-see attractions.

2901 Collins Ave., Miami Beach
786-257-4548
basementmiami.com
Where else can you drink, dance, party, bowl, and ice-skate? Basement is so dank that Drake once rented out the whole place to skate with Rihanna during Miami Music Week. It's a rather intimate space with room for dancing, although it can get cramped, so make sure you get there early enough to avoid the long line. Dubbed one of Miami's most exclusive clubs, this adult playground is not to be missed. DJ Behrouz at Do Not Sit on the Furniture.
Photo by Chris Carter

423 16th St., Miami Beach
510-551-5067
donotsitonthefurniture.com
Founded and headed by the internationally renowned DJ Behrouz and his wife, this bohemian house hangout is a far cry from the ostentation of its South Beach neighbors. It's an intimate, dimly lit room full of organic accents, and it features one of (allegedly) three disco-ball sharks in the world. Behrouz and his wife moved to SoBe from San Francisco, and here they offer a bit of that friendly, everyone-welcome atmosphere of the West Coast. Heavily influenced by Burning Man culture, the club hosts some marathon nights that begin with light yoga and meditation in the backyard. The place is lined with golden cassette tapes, and the one rule is simple to follow: Do not sit on the couches and chairs. Get up and dance whenever possible. The music is gonna make you move anyway. Might as well give in to your best debauched self. 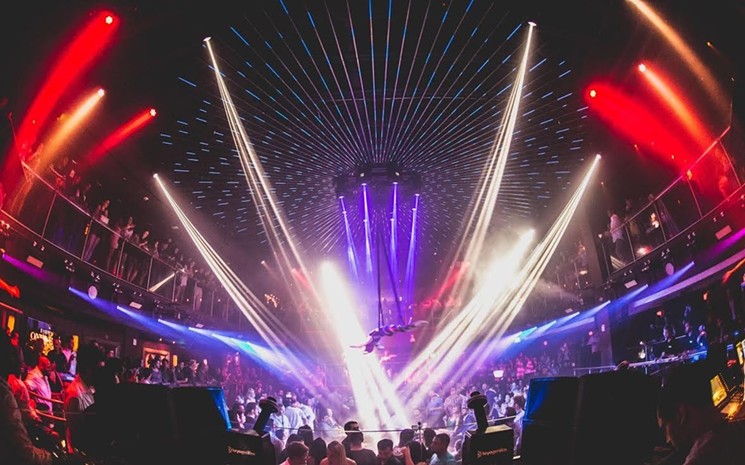 It's never too late or too early to party at E11even.
Photo courtesy of E11even

29 NE 11th St., Miami
305-829-2911
11miami.com
Since it opened in February 2014, this bacchanalian wonderland has never closed. It's a 24/7/365 party palace, a veritable feast for the senses. E11even doesn't like to be called a strip club, but, yes, the female dancers are topless. They don't take off their bottoms, though, and they do perform athletic feats. Offering performances by Cirque du Soleil-caliber aerial ballerinas and dancers, E11even prefers the term “cabaret.” It's also a bona fide megaclub with a two-tier dance floor, a lavish selection of champagne rooms, and a massive stage and DJ booth where grade-A talent comes to play. Drake, Rae Sremmurd, Marshmello, Diplo, and others have made E11even their favorite spot in town. The rooftop has its own bar and restaurant for when you want to watch the . It's never too late or too early to party at E11even. 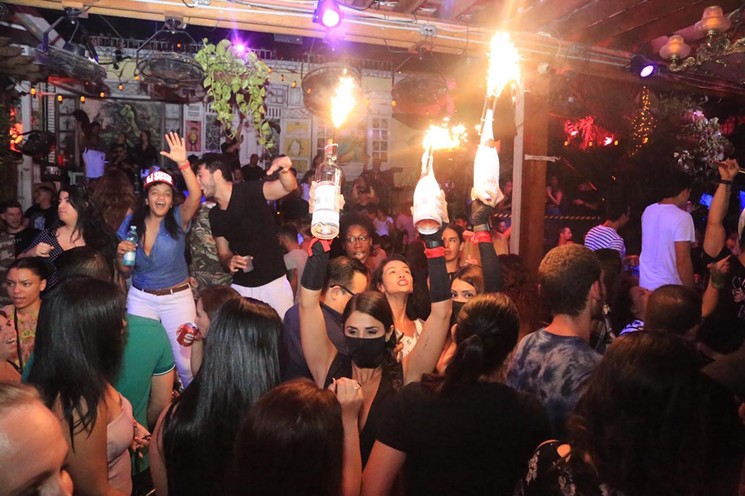 167 NW 23rd St., Miami
786-409-2241
elpatiowynwood.com
Techno and house music are all well and good, but sometimes you need a bit more flavor. El Patio — which New Times readers chose in 2019 as the Best Latin Club in Miami — can help. Co-owner Nicolas Hoyos imported furniture from his Colombian homeland to perfect the outdoor venue’s homespun vibe. DJ Mr. Pauer keeps the party going with a perfect playlist of reggaeton and Latin tunes, and the excellent happy hour and Tuesday ladies’ night make this one of Miami’s best party spots, whether or not tu hablas español.

34 NE 11th St., Ste. B, Miami
786-608-2824
floydmiami.com
This little sibling club to Space is hosted in the same building and run by the same management, but the vibe is completely different. Brick arches and mood lighting give this small room an intimate cocktail-bar feel that’s rare in Miami. Those looking to cut a rug won’t be disappointed, thought, because the talent bookers are the same folks behind Space and the Ground. Upcoming international DJs fly in all the time to play sets perfectly suited for the room.

4441 Collins Ave., Miami Beach
305-674-4680
livnightclub.com
When it comes to Miami Beach megaclub decadence and style, there's no other that hits the mark like LIV. This is the as-seen-in-music-videos atmosphere of your dreams. This is the place Kanye once rapped about. This is the club the Chainsmokers made fun of in "#Selfie." If you're looking to dance, though, beware: You'll spend the majority of your time trying to figure out where to stand while being pushed by passersby and beefy security guards. If you have a table or know someone with a table, this is as opulent and exclusive as it gets. Expect confetti, sparklers on expensive bottles, half-naked dancers, and all the smoke and lasers your lungs and eyes can handle. You can hate, but when you're here, you're gonna have a good time, and it's something you have to try at least once. Sunday is the king of hip-hop — you might run into Lil Wayne and most definitely will see Floyd Mayweather. The majority of nights are dedicated to EDM excess. Pick your poison, and be sure to come loaded with cash. 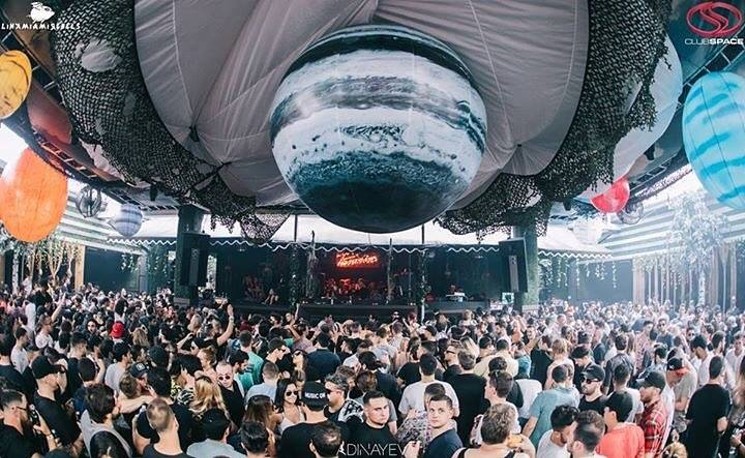 The Terrace at Space is lit up with sunshine and smiles.
Photo by Adinayev

34 NE 11th St., Miami
305-495-8712
clubspace.com
This downtown all-night rage fest is a living institution of Miami nightlife. It was originally opened on the Beach by nightlife kingpin Luis Puig in the '90s, but he soon moved it to downtown, effectively opening the then-blighted area to after-hours entertainment. Today it's the home base of a new generation. The people of III Points, Link Miami Rebels, and others have all come together to breathe new, forward-thinking life into the venue. Open Saturday from 11 p.m. till whatever time Sunday they decide to close, Club Space brings house and techno DJs to perform fantasy marathon sets every weekend. They say you're not a real Miamian until you've seen the sun rise on its famous Terrace, so what are you waiting for? Get out there. Story is for music lovers looking for a grand experience.
Photo by Karli Evans

136 Collins Ave., Miami Beach
305-479-4426
storymiami.com
Meet LIV's cooler little sister. Unlike LIV, Story offers plenty of room on the dance floor for those who wish to do more than pose for selfies in the VIP area. You'll find all the glitz and glamour — bright lights on bottles, scantily clad dancers in extravagant masks, massive drops of confetti, lasers shooting every which way, and everything else you'd expect from the megaclub experience. The decor is all neon angles and triangles, giving the club a literal edgy sensibility. Bookings include icons of hip-hop and house — everyone from Oliver Heldens to Travis Scott and Steve Aoki. If you're a music lover looking for a grand, over-the-top experience, Story is your best bet. 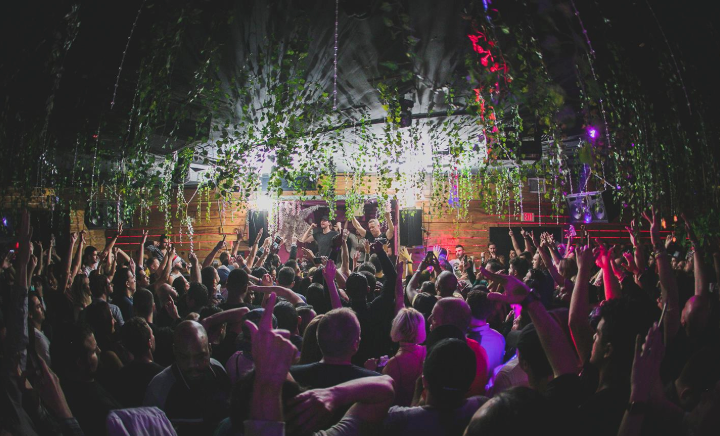 Treehouse is a top spot to cut a rug.
Photo by Pedro Rivera

323 23rd St., Miami Beach
786-318-1908
treehousemiami.com
Not everyone is lucky enough to have a Treehouse in their backyard. But if you call Miami home, you have one that churns out house and techno on the regular. The treehouse-themed venue, dubbed Best Dance Club by New Times in 2018, is a top spot to cut a rug. Boasting indoor-outdoor areas and cutting-edge bookings, this low-key South Beach spot a solid night of unadulterated fun without the douchebaggery. 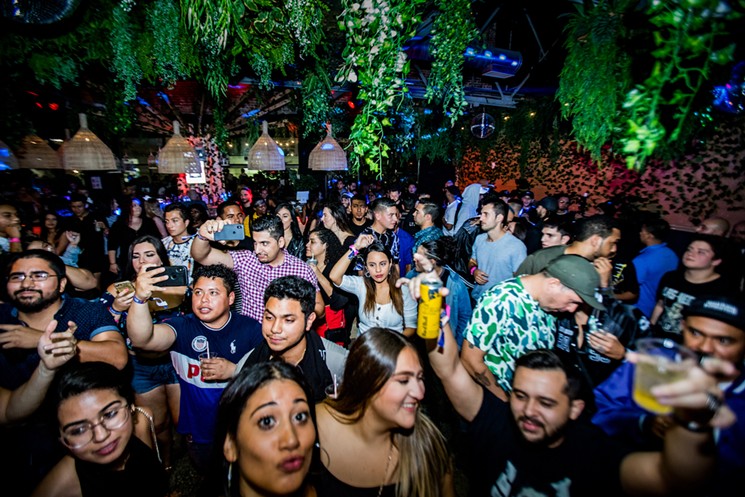 55 NE 24th St., Miami
786-360-3712
wynwoodfactory.com
Run by Space and Heart founder Louis Puig, this huge establishment just east of North Miami Avenue on NE 24th Street is quickly becoming Miami’s new favorite nightlife hot spot. Wynwood Factory boasts four event spaces, both outdoors and indoors, including two bars and a 20,000-square-foot terrace. Its recurring events, such as Relic and Ethics, always bring in heavy-hitters from the international DJ scene. The venue is also becoming known for its excellent service, and even the bouncers flash polite smiles.
KEEP MIAMI NEW TIMES FREE... Since we started Miami New Times, it has been defined as the free, independent voice of Miami, and we'd like to keep it that way. With local media under siege, it's more important than ever for us to rally support behind funding our local journalism. You can help by participating in our "I Support" program, allowing us to keep offering readers access to our incisive coverage of local news, food and culture with no paywalls.
Make a one-time donation today for as little as $1.