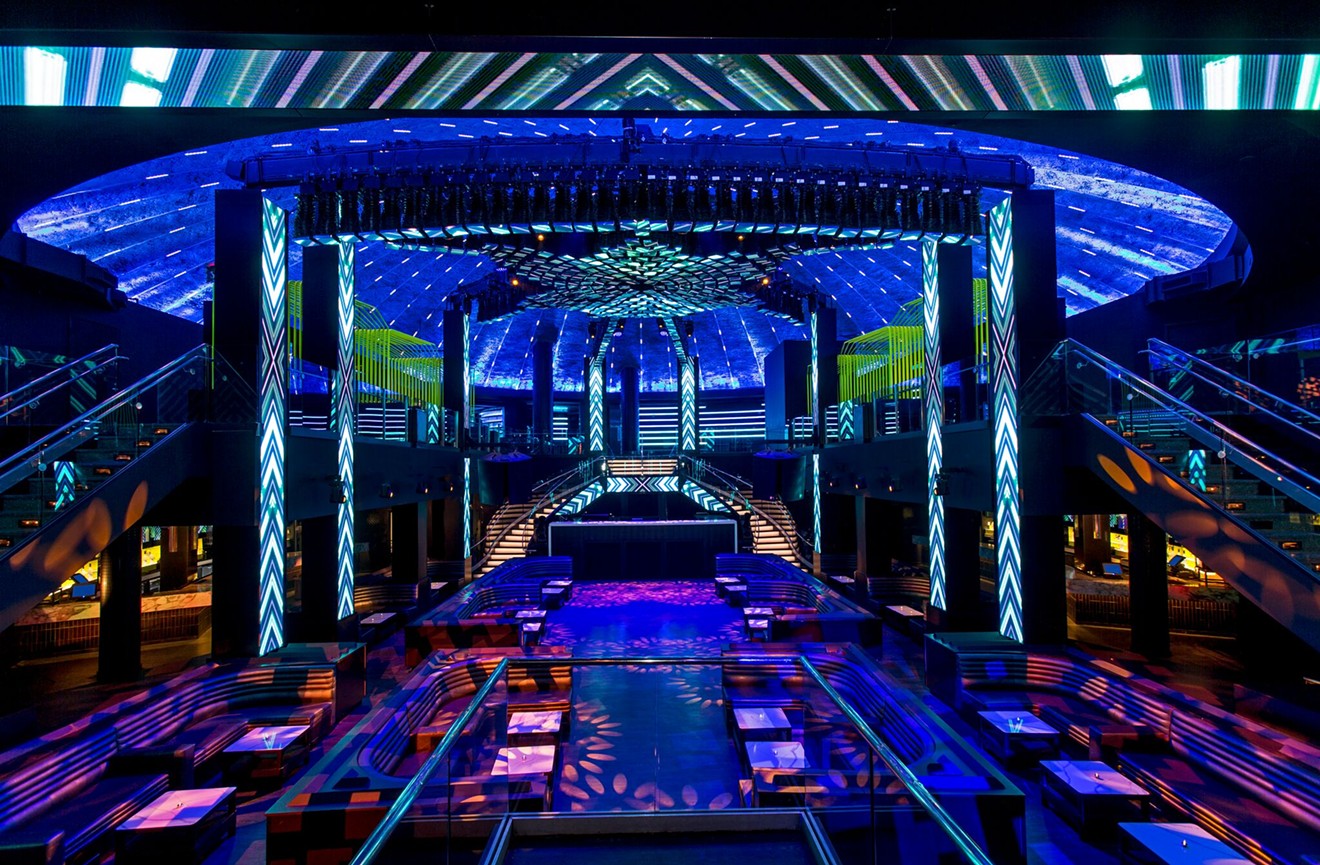 LIV at the Fontainebleau MIami Beach LIV
Miami is known for glitz, glamour, and douchebaggery. It's no secret this town has a reputation for over-the-top bottle service and DJs. It's also no secret the era of traditional VIP rooms has gone the way of the dodo because, let's face it, everyone in Miami thinks they're VIP. On any given night, you're guaranteed to find a place to party. But that doesn't mean you're getting in.

From megaclubs to low-key bars and members-only spots, here are Miami's ten most exclusive spots. 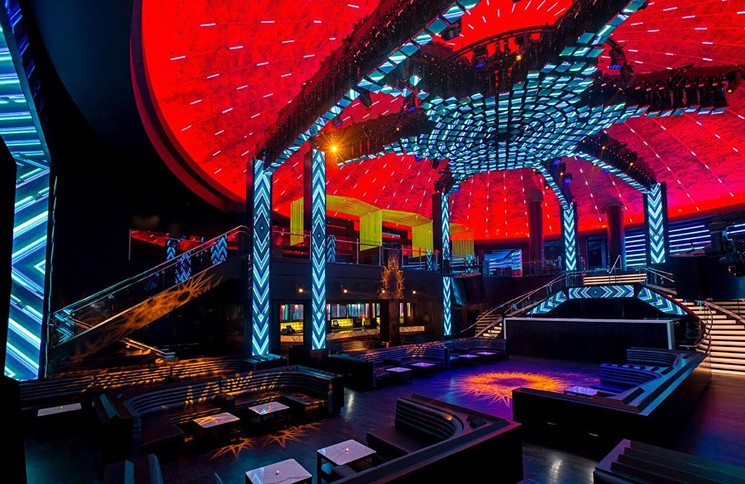 Think you can get in?
LIV
1. LIV. A visit to the iconic club is a rite of passage. You often hear hyped tourists on flights out of the 305 gushing about LIV, bro. If the mention of this world-renowned nightlife institution prompts you to roll your eyes, you're probably just angry about that time you couldn't get in. The upscale club, dubbed one of the best places to spot a celebrity in Miami, underwent a $10 million renovation in 2017 and now boasts a massive LED spider designed by SJ Lighting owner Steve Lieberman, the genius behind Ultra's and Electric Daisy Carnival's insane light shows. If you can swing a table at this megaclub, you're golden. 4441 Collins Ave., Miami Beach; 305-674-4680; livnightclub.com. 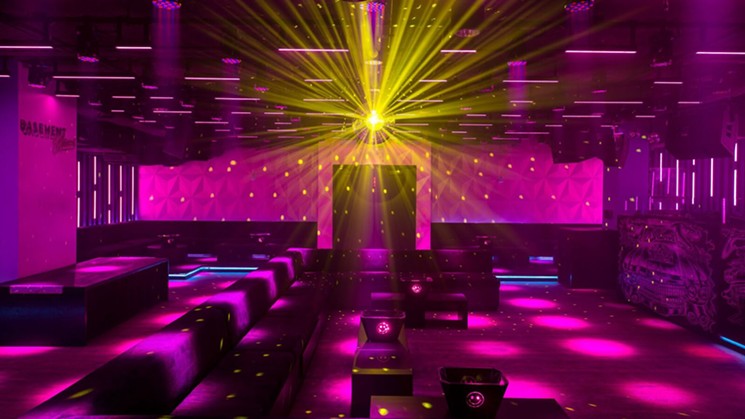 Basement is Miami's favorite adult playground.
Basement Miami
2. Basement Miami. The Edition's super-awesome subterranean disco, created by Ian Schrager of Studio 54, is an adult playground boasting a 2,000-square-foot ice rink, a four-lane bowling alley, and one hell of a good time minus the red velvet ropes. But though it's packed with features, Basement touts of of inclusivity, not exclusivity. In fact, if you're a Miami-Dade resident, Basement rolls out the red carpet for you. There was a time when the club's secret smiley-face tokens were reserved for the rich and famous. But now you can get one too. With the token, locals receive free club entry without lines, drink specials, discounts on bowling and skating, a 10 percent discount at Market, and other great VIP experiences throughout the year. Strut your butt to the hostess stand and mention the smiley token, show a valid Miami-Dade ID, and yell, "305 till I die!" Just kidding — please don't yell. 2901 Collins Ave., Miami Beach; 786-257-4548; basementmiami.com. 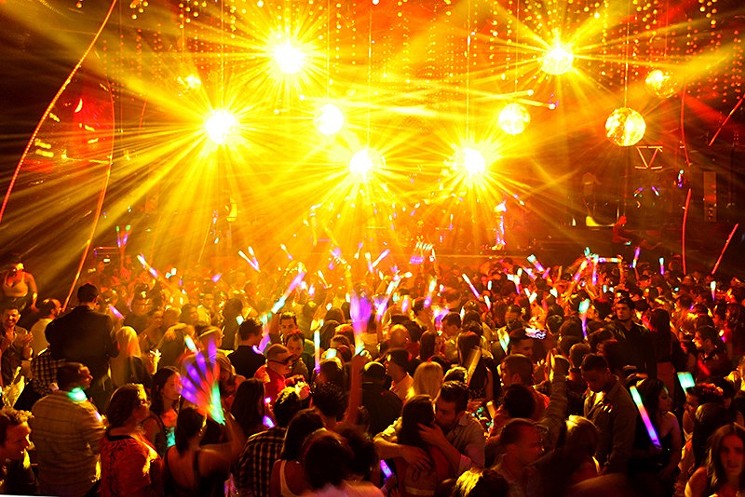 The 27,000-square-foot South Beach dance mecca Story has it all.
Photo by Liliana Mora
3. Story. This 27,000-square-foot South Beach dance mecca has it all, from bright lasers to confetti drops. The prestigious hot spot has had everyone on its stage, from Avicii and Tiësto to Travis Scott. If these walls could talk, they'd tell lots of stories, like the time the Miami Heat celebrated its 2013 championship here and racked up a $100,000 bar tab that was comped by club owner David Grutman. If you're not at the best South Beach club to dance your ass off, turn around. 136 Collins Ave., Miami Beach; 305-479-4426; storymiami.com. 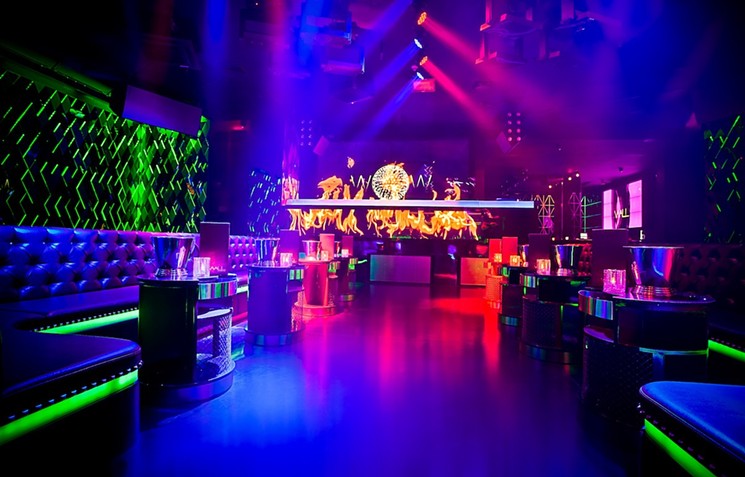 You might even spot Paris Hilton at Wall Lounge.
Photo by Gary James
4. Wall Lounge. At this go-to spot, you'll catch light shows on the walls and performances by world-famous artists and DJs. If you're lucky, you might even see Paris Hilton. The glamorous boutique lounge, located inside the W South Beach, is a hotbed of star-studded activity. According to Times, "Wall's success lies in its size; it is so boutique it does not merit a VIP section — the lounge itself is the VIP." At this Miami Beach favorite, grab a seat on one of the gold leather couches, sip a fancy cocktail, and escape the nightlife chaos. 2201 Collins Ave., Miami Beach; 305-938-3130; wallmiami.com.
5. Rockwell. On Washington Avenue stands one of South Beach's best dance clubs. It occupies the former home of popular spots Les Bains and Chaos. And if you ever hear someone mutter, "Mondays suck," it’s obvious they’ve never been to Rockwell Mondays. The exclusive spot is where people go to live out their Miami fantasies and wake up the next day wondering if the overdraft fees were worth it. The answer is always yes. Come dance Monday, Wednesday, Friday, and Saturday. 743 Washington Ave., Miami Beach; 305-793-3882; rockwellmiami.com. 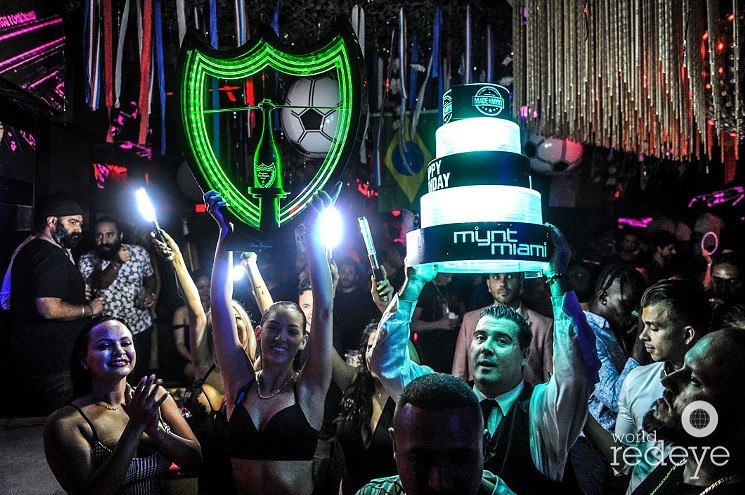 It's not even your birthday.
Photo by World Red Eye
6. Mynt Lounge. If a bottle pops at Mynt and no one is around to hear it, does it make a sound? Boasting "the strictest door policies in the area," this club better not catch you wearing . If you’re looking to spend the night dancing to house music alongside Miami’s most fabulous, don your chicest outfit and head to the intimate South Beach hangout. Before getting the party started, grab a bite next door at Mynt’s new sister restaurant/lounge hybrid, Myn-Tu. 1921 Collins Ave., Miami Beach; 305-532-0727; myntlounge.com. 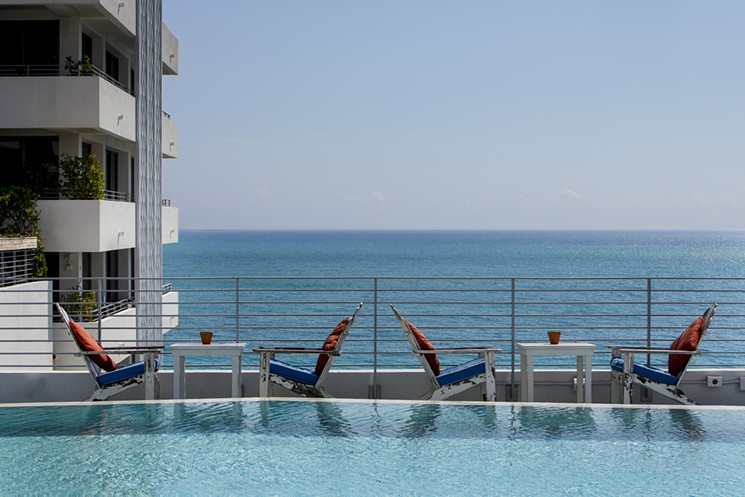 Check out the views at Soho Beach House.
Soho Beach House
7. Soho Beach House. Your stuffy suit won't get you through the door of this ridiculously cool and exclusive members-only club, hotel, and spa. The 16-story oceanfront tower in Miami Beach caters to those who work in traditional creative fields such as film, fashion, music, and advertising, to name a few. This private hideaway is by no means a traditional nightspot but rather a laid-back club where the who's who of Miami rub shoulders sans the sweat. On the second floor, DJs spin on the weekends and bands occasionally perform at the Cuba-centric Club Bar. On the eighth-floor rooftop, members can also groove to a live DJ on the weekends with an ocean view at the posh taqueria and plunge pool, Ocho. Soho Beach House also boasts a Cowshed spa, a beach club, 49 guest rooms, Cecconi's restaurant (where nonmembers are welcome), and other diversions. Pro tip: Don't dare forget to take a pic in Soho Beach House's famous photo booth. 4385 Collins Ave., Miami Beach; 786- 507-7900; sohobeachhouse.com. 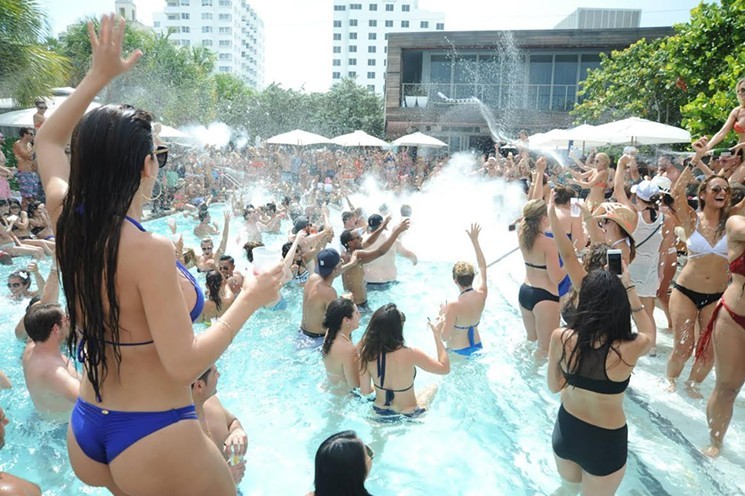 Hyde Beach gets wild.
Hyde Beach
8. Hyde Beach. Between Hyde Beach's pool, beach, and indoor/outdoor space, there are more than 8,000 square feet for partygoers to get unapologetically rowdy. But if there's one thing Miami knows how to do right, it's wild out poolside. If you're looking to celebrate at one of South Beach's best pool party spots, look no further than the swank oceanfront SLS Hotel. Inside, be sure to check out the chic retro lounge. Outside, don't miss the giant rubber duckie statue. 1701 Collins Ave., Miami Beach; 305-674-1701; sbe.com. 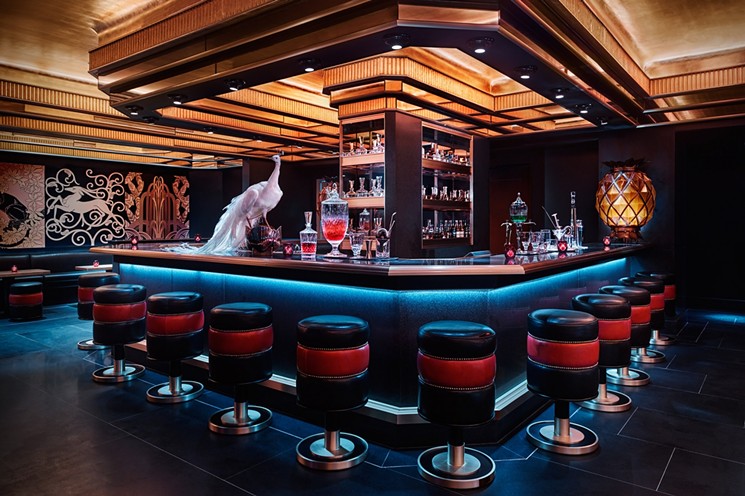 Saxony Bar is extraspecial.
Photo by Nik Koenig
9. Saxony Bar. There's no shortage of places to night-crawl on the beach, but this deco-inspired cocktail bar is . The intimate space is located in the fabulous Faena Hotel Miami Beach, one of the best hotels in South Florida. If you're looking for a glamorous, laid-back spot with a live DJ, grab a seat on one of the red-and-black stools and order a classic cocktail Thursday through Saturday. 3201 Collins Ave., Miami Beach; 305-534-8800; faena.com. 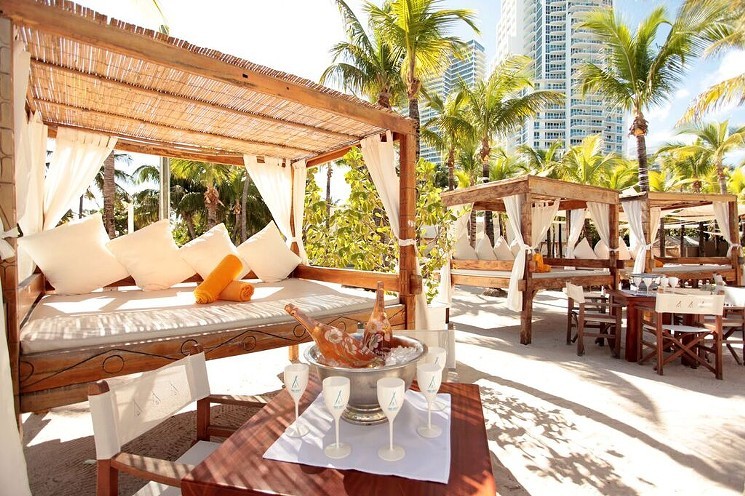 Dig your toes in the sand at Nikki Beach.
Nikki Beach
10. Nikki Beach. It's true — we live where people vacation. We can go to the beach in the dead of winter and not even bat an eye. And that's why there's no better way to party in Miami than to sink your toes in the sand at a proper beachside bash. This elite South Beach staple boasts a fabulous oceanfront beach club, a restaurant, a garden café, and an indoor club. But the luxe Nikki Beach's famous weekly buffet brunch, Amazing Sundays, is where it's at. In true Miami fashion, bid adieu to the weekend by lazily soaking up the sun on a daybed and sipping a bloody mary. 1 Ocean Dr., Miami Beach; 305-538-1111; nikkibeach.com.
KEEP MIAMI NEW TIMES FREE... Since we started Miami New Times, it has been defined as the free, independent voice of Miami, and we'd like to keep it that way. With local media under siege, it's more important than ever for us to rally support behind funding our local journalism. You can help by participating in our "I Support" program, allowing us to keep offering readers access to our incisive coverage of local news, food and culture with no paywalls.
Make a one-time donation today for as little as $1.