Ten Movies to Look Forward to in Early 2019

Oscar winner Brie Larson stars as ex-Air Force fighter pilot Carol Danvers in Captain Marvel. Courtesy of Walt Disney Pictures
Whoever said the first quarter of the year was a bad time for movie releases was a damn fool. The January, February and March months of 2019 are already boasting a strong slate, with U.S. distribution of international festival favorites along with welcome returns of first-rate genre filmmakers like M. Night Shyamalan and Jordan Peele. From the indies to one particularly highly anticipated Marvel debut, here’s a list to bookmark for your top-of-the-year moviegoing. Release dates, of course, are subject to change.

The surprise at the end of M. Night Shyamalan’s multi-personality horror film Split (in which James McAvoy dons 24 different personas) was that it belongs in the same cinematic universe as Shyamalan’s 2000 film Unbreakable. In the upcoming third of the trilogy, Bruce Willis reprises his role as Unbreakable’s trainwreck survivor turned superhero David Dunn, who pursues the beastly 24th personality of Kevin Wendell Crumb (McAvoy). And Samuel L. Jackson returns as the wheelchair-bound, mind game-playing villain Mr. Glass, whose name the film takes after. Before last year, Glass was a sequel we didn't know we needed or even could have, but now we’re itching to dive back into the psychologically twisted world of Shyamalan’s non-comic-book superheroes.

Just when we thought gender-flipped remakes were so over, Taraji P. Henson comes along to take over Mel Gibson’s place in a remake of What Women Want. Henson stars as Ali Davis, a sports agent who, after losing a big promotion at work to a less-deserving male colleague, gains the ability to hear men’s inner thoughts. As you can guess, men’s heads are way more littered with dirty thoughts and fart jokes than women’s, but Ali wades through and uses her newest skill to get the career boost that should’ve been hers in the first place. And, of course, she uses it for some personal pleasures too.

Hotel by the River (February)

Hong Sang-soo has recently been blessing us with multiple new releases a year, and the South Korean auteur kicks off early 2019 with a new black-and-white family drama that awed festival crowds. This story of an elderly writer who stays at a hotel (yes, by the river), his adult sons who visit him and two women staying in a nearby room feels like a Hong greatest hit of interwoven relationships and soju-induced comedy. Yet it departs from his usual form — not just in the handheld camerawork but also in the contemplations of mortality. Paula Beer (left) plays Marie and Franz Rogowski is Georg, a Jewish refugee from Germany, in Transit.
Courtesy of Music Box Films
Transit (March)
German filmmaker Christian Petzold (Barbara, Phoenix) remains fascinated by double identities and haunted pasts, and his latest is a stellar example of his style. Transit is a mysteriously modern-day reset of a post-war story about a refugee who escapes concentration camps and finds himself in France living in the guise of a dead writer. There, he becomes entangled with the writer’s wife, who’s not yet aware she has become a widow.

After years of watching Brie Larson’s workout videos on Instagram, we’ll finally see the Oscar winner’s hard training come to fruition as she becomes Marvel elite in the upcoming Captain Marvel. Larson stars as ex-Air Force fighter pilot Carol Danvers, who must come to terms with her identity and where she comes from. Our woke captain doesn’t want to fight the galactic war, though — she wants to end it.

There’s not a lot of details out about Us, but that doesn’t dampen our excitement one bit, especially knowing that this is another Jordan Peele-directed Blumhouse production. It is said to be a “social-horror thriller” in the same vein as Peele’s Get Out. Oh, and Lupita Nyong’o is in it. Enough said!

Chinese director Jia Zhangke’s newest film is a two-decade-spanning gangster epic filmed with different formats and camera types, capturing transformations of both the personal and national kind. At its heart is Jia’s wife and muse Zhao Tao, who plays Qiao, a fiercely protective woman who takes the fall for her mobster boyfriend. But when she leaves prison, she realizes his loyalty isn’t as strong as and is left to fend for herself.

The set photos of Matthew McConaughey in various Hawaiian shirts were enough to get us running to the theaters, but it gets even better: McConaughey stars as a man named Moondog, a stoned beach bum who gets into some hilarious misadventures along with Snoop Dogg (who’s credited as “Lingerie”), Isla Fisher, a dolphin-obsessed Martin Lawrence Zac Efron sporting some extreme facial hair. It’s been almost six years since Spring Breakers and we have a feeling this will be a big return for writer-director Harmony Korine. 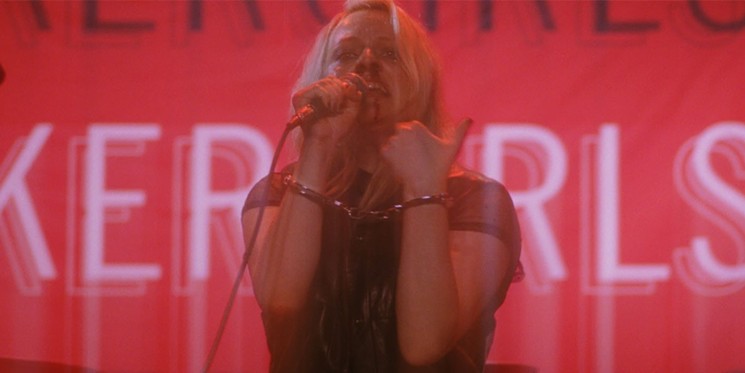 Elisabeth Moss plays the messy, temperamental frontwoman of a ’90s rock band in Her Smell.
Courtesy of Gunpowder Sky
Her Smell (April)

Alex Ross Perry’s movies can be blindingly white in their milieu and interests, and thus often out of touch, but there’s something resonant about his jaded rock-star movie in which his frequent collaborator Elisabeth Moss stars as the messy, temperamental frontwoman of a ’90s rock band. Filmed in long backstage takes, disruptive studio sessions and on a post-heyday road to recovery, this portrait of a talented but doomed antiheroine draws both fascination and empathy. Moss’ recognizably hip costars include Cara Delevingne, Agyness Deyn and Amber Heard.
KEEP MIAMI NEW TIMES FREE... Since we started Miami New Times, it has been defined as the free, independent voice of Miami, and we'd like to keep it that way. With local media under siege, it's more important than ever for us to rally support behind funding our local journalism. You can help by participating in our "I Support" program, allowing us to keep offering readers access to our incisive coverage of local news, food and culture with no paywalls.
Make a one-time donation today for as little as $1.
Kristen Yoonsoo Kim