When It's Time to Leave Miami 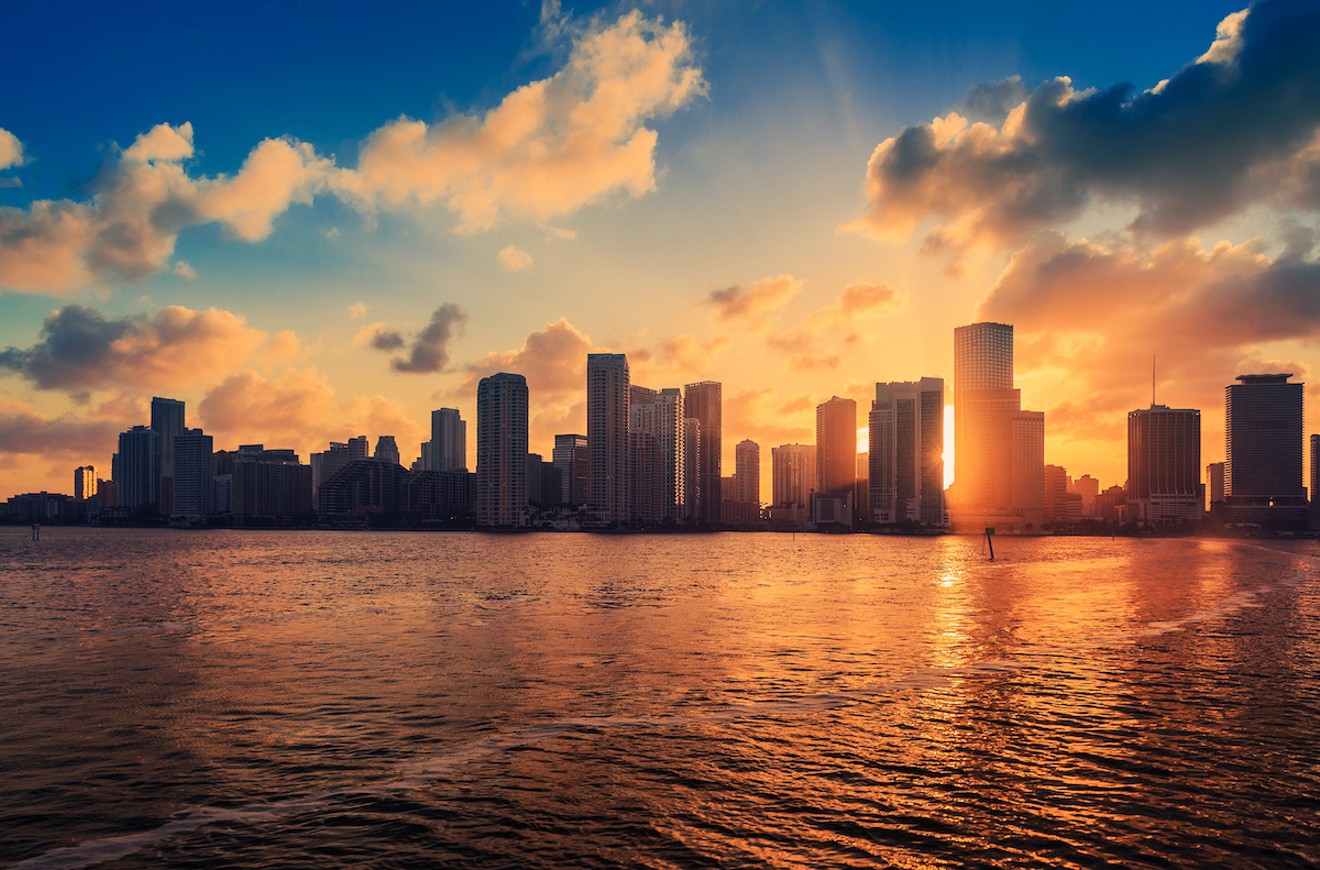 Miami doesn't always feel like paradise. Photo by THEPALMER/Getty
During my last week in Florida, I visited a friend's oceanview apartment. As we stood on the balcony, admiring the Atlantic and watching the palm trees sway in the breeze, I looked down to see elderly people swimming in a pool area that was still under construction.

The sawdust didn't seem to bother them, which seems like the best way I can describe South Florida.

So for those who are bothered by the sawdust and are thinking of the unthinkable — leaving Miami — this article is for you. For those thinking of leaving their Midwestern and Northeastern homes for an overpriced studio with no parking, this is also for you. Finally, for those who have never left Miami, this is a horror story to tell your kids before they go to bed at night.

After living in Miami for so long, you develop a strong mistrust of anyone you see on the street. God forbid they try to talk to you. It doesn't take long for new arrivals to discover why Miamians are better at ignoring than New Yorkers. Even if it's not dangerous, the people who stop you on the street are just plain odd and uncomfortable to talk to. The mythical "Florida man" does exist, and he takes many forms in Miami. You still encounter people like this outside of Miami and Florida, but the number drops significantly.

On top of all that, Miami's abstract, unspoken social contract makes everyone indifferent and ignorant of everyone else. It's hard to notice it when in Miami, but it became all too clear the moment I left. People waved to me on the street, cars stopped for me to pass, and people used their turn signals. I even got a "good morning." (It was terrifying.)

Everyone's kindness was overwhelming until I walked into a post office and got my first taste of what people in this community were like when they were tired and frustrated. I felt right at home. People everywhere have a bark, but in Miami, it felt like it would mostly end in a bite.

Obeying the law to the letter.

It's OK to admit it: Miami has a tough time following the rules. Fraud, scams, thefts, and other illegal activity is just another part of life in the city — and so is turning the other cheek to it. "Snitches get stitches" is a saying Miami took to heart, and it has stuck. Everything has a tang of corner-cutting, nepotism, and favoritism to it. In other places in the U.S., this is dealt with more quickly and effectively than in Miami. Watching a bystander call the police for a fender bender was one of the first "we're not in Miami anymore" moments for me.

Clothes get kind of boring.

It's cold, so crop tops don't do the job like they used to. Even if it was hot, the clothes I'd wear in Miami seemed like they showed too much skin or were too colorful for where I live now. Walking around my small town may make me feel like an Instagram model and so out of place when everyone else is clad in hoodies and sweatpants.

Colors are out of the question, as I saw myself frantically buying white, gray, and black to get men to stop staring. It becomes clear that Miami's reputation for sun and fun — to put it politely — has trickled down to the way we subconsciously dress ourselves. There's a lot of assimilating to do, but that's one part of Miami I'm OK with keeping.

There are Spanish-speaking people in all parts of the U.S., and no matter where you go, you'll run into someone from Latin America. In Miami, you will almost exclusively run into Cubans when you hear the language, a stark difference from the rest of the country. Thanks to heavy immigration from the Caribbean island to Miami, there are a lot of Cubans — and Cuban-Americans like myself — who call Miami home, or used to.

The downside to this is that many older Cubans tend to involve themselves in all manner of far-right antics. (This does not apply to all Cubans; younger Cuban-Americans often attempt to overcome the generational trauma that plagues the community.) Cuban-Americans know the feeling of hesitating to bring up a particular topic for fear of what your tío will say or the curse of being branded the "family socialist." It's refreshing to hear Spanish, a language I love to speak, and not tense up or prepare for the worst political takes. Although I’ll miss the cafecitos and rumba, I'm willing to give them up.

Driving does not have to be a mission.

Everyone loves to say their city is the worst in traffic and bad drivers, and none of them have been to Miami. (This usually comes from the New York City crowd, but driving in NYC is complicated, not dangerous.)

Miami drivers are fast, reckless, and angry. Forget honking when the light turns green; they'll cut you off, tailgate, drag race, do doughnuts, and blast Bad Bunny the whole time.

I found myself frustrated and cursing at people who were going just a few miles above the speed limit when I moved. Not only did the turn signal make a comeback, but everyone was also well-versed in the lost art of parallel parking.

Mangos are a big deal in Miami — so much so that people are willing to sneak into their neighbors' yard just to pick some of those sweet fruits for later. It was common to pass by a house with a mango tree and have at least one person in your group start scheming ways to pilfer them. The same was true for mango tree owners, who employed various methods of preventing mango theft. I knew a guy who lived near Miami International Airport who installed a camera next to his mango tree.

Moving out of Miami has made me realize how ridiculous all this is to type, but when you're on the ground, the mango hustle is real.

On our first day away from Miami, my fiancée made an interesting observation: an older man in a golf jacket spoke perfect English. That's when all of those times passing by domino parks, grabbing coladas, and driving past Trump supporters on the corner came together for me, and I realized the same thing they did. Miami — not Miami Beach — has a lot of older people but it seems like only a minority of them speak English. Many are exiles from Cuba or immigrants from Latin America. Many will be talking about how much they hate Joe Biden at a ventanita or praying to their at-home altar to Jesus. All of this is in Spanish, which is understandable: Immigrating to a new country puts a lot of stuff on the back burner. On the top of the list of priorities was making sure their families had food and a stable income, with some money saved up to bring over the rest of the family. It's easy to see why English is a luxury.

For those thinking of moving to Miami, this is just another reason it's recommended you learn Spanish.

Before leaving, I was talking to a Cuban man I knew.

"Up there, you're considered a person of color," I told him.

The thought of a Hispanic man considering himself white sounds like an SNL sketch to those who live comfortably in blue states, but it is a constant debate in Miami: Who gets to be white?

The arbitrary status quo is that all Cubans are white except the Black ones and everyone else is not. Of course, that's not true, but it hasn't stopped many Hispanics from endorsing and supporting policies that would put them at a disadvantage simply because they do not regard themselves as minorities.

Everywhere else, whiteness has a much stricter definition. The pool of people who can benefit from its privilege shrinks significantly, and many of the people who enjoy it in Miami cannot do so in other areas.

On my first day on the road, I drove up a small hill. Although it was more like an oversize speed bump, I could still accurately joke that it was higher than all of Miami. One of the sweeter and more unexpected advantages to leaving Florida is the views. The grass may not be greener, but you can definitely get a more scenic shot of it if you want to. This opens up opportunities to take fun road trips and maybe get back into hiking but using all of your old, rusty gear because the new stuff is too expensive. This comes with a downside, though: At random points in the day, mostly while driving, your ears are constantly popping. I don't know how long this takes to get over, but I'm not excited to find out.

Wondering how you even did it.

Miami is kind of like one big drunken stupor. That's a tad on-the-nose, but it's true. You tolerate things you would have never accepted under other circumstances, you see crazy and wild things happening every day and brush it off, and at the end of it you worry whether you can ever go back to "normal." When you think back to your time there, or when you tell people your stories, you really wonder how you even survived.

Miami is not for everyone and that's OK — it was never meant to be. Maybe reading this made you realize that and you'll stay in your cozy, little Midwestern town, or maybe you'll stay in Miami and dread the strict driving standards of the continental U.S.

Whether staying or going, Miami remains one of the few truly unique cities this nation has to offer.
KEEP MIAMI NEW TIMES FREE... Since we started Miami New Times, it has been defined as the free, independent voice of Miami, and we'd like to keep it that way. With local media under siege, it's more important than ever for us to rally support behind funding our local journalism. You can help by participating in our "I Support" program, allowing us to keep offering readers access to our incisive coverage of local news, food and culture with no paywalls.
Make a one-time donation today for as little as $1.