Is it Legal to Pick Mangos Off Your Neighbor's Tree? 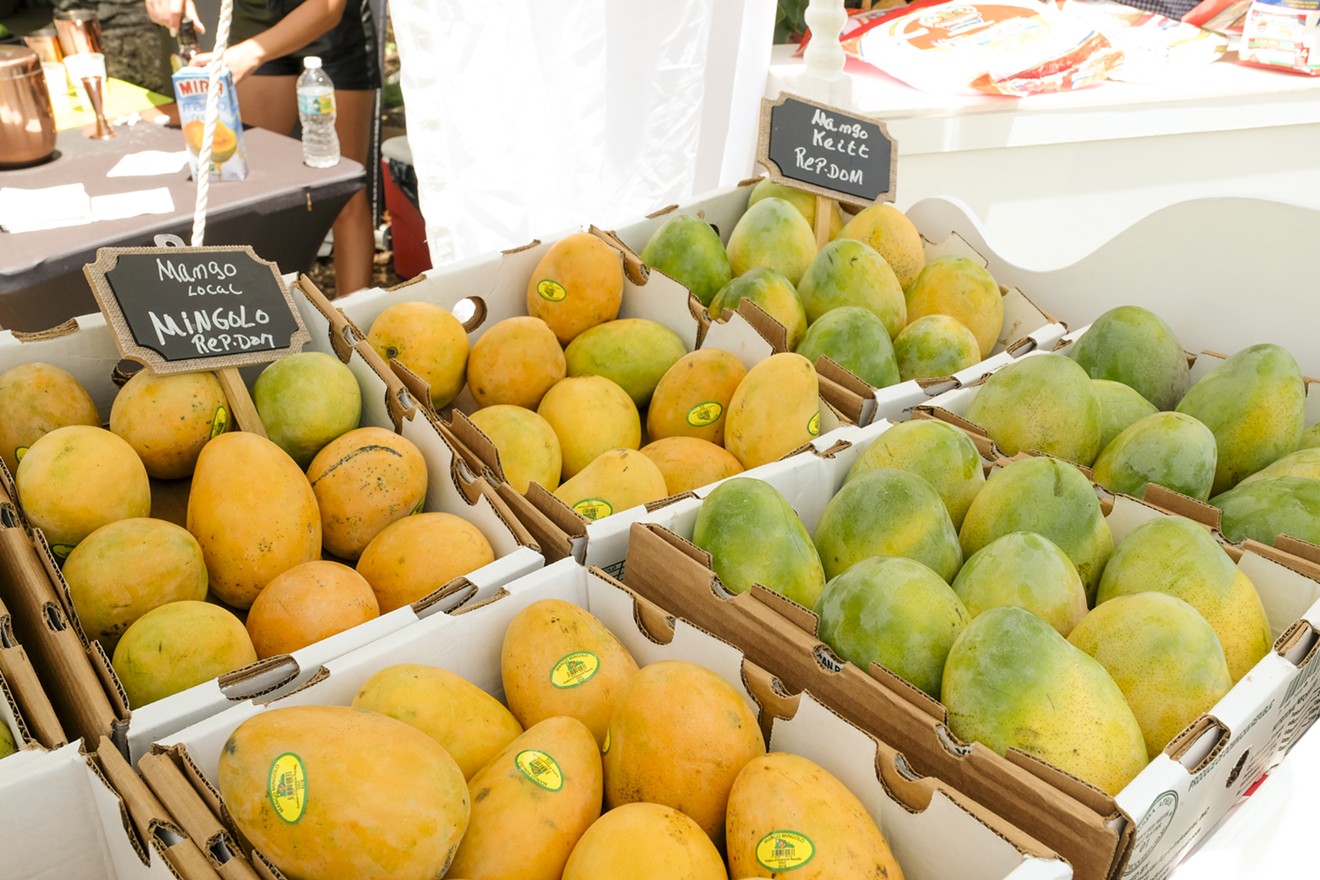 'Tis the season for mangos! Photo courtesy of Fairchild Tropical Botanic Garden
Mango season in Miami is an idyllic time, when tasty red and yellow fruits ripen on trees, fall to earth, and in some cases, provoke neighbors to nearly bust down doors with claims of theft.

Take, for instance, a video posted on Only In Dade's Instagram page last week that shows one particularly irate fellow on a surveillance camera at his neighbors' front door, demanding the immediate return of mangos allegedly stolen from his tree.

"You motherfuckers stole all my fucking mangos. We have you on camera motherfucker this morning. You stole all of my mangos," the apparent owner of the mango tree imparts. "I want all my mangos back, you fucking crackhead."

Whether the fruit-induced frenzy was warranted is a topic best left to the comments section — "don't play with a man's mango tree" — but the altercation raises a question that many Miamians likely ponder come late spring: Is it legal to pick mangos from someone's else's tree?

If you've spent enough time on Miami streets, you've probably witnessed it: a fruit-loving passerby discreetly nabbing a few treasures, the scavenger type who looks for intact prizes that have fallen into the street, and of course, the industrious tree owners who sell their bounty by the side of the road.

To clear up what kind of fruit picking is allowed in Miami and avoid any sticky legal situations, New Times consulted attorney David Barman, who teaches business law at Florida International University. During one of his first lectures of each semester, Barman explains that who owns a fruit depends on where it falls.

"Under common law, if the fruit falls in your yard or on the sidewalk, it's for sure yours," Barman elaborates. "If the fruit tree is on the branch of your neighbor's tree but hanging over your fence, it's still your neighbor's fruit. If you take it before it falls, it's common-law theft."

Common law refers to laws that are based on judicial precedent, i.e., on decisions made by judges in previous related cases and derived from the system of law in England. Under Florida statutes, common law is widely applicable except where a statute deliberately mentions the issue at hand. Because Florida statutes don't specifically outline the rules related to the fruits of your neighbor's tree, judicial precedent applies.

According to Barman, Gallo v. Heller sets the most commonly known legal precedent for neighbor-tree relations in the state. The 1987 appellate court case in Miami-Dade County didn't involve fruit, however.  Rather, it centered on a tree that caused damage to a neighbor's property. Under the appellate court's decision, a property owner is not responsible for damages caused by their tree if said tree is healthy, but the owner's neighbor is allowed to trim the tree's branches up to the property line. Should those branches happen to be bearing fruit at the time they're trimmed, Barman says, they should be fair game.

Under Miami-Dade County's code of ordinances, taking plants or fruits from any property without permission is a no-no, and will be treated as a code violation.

"It is unlawful for any person to take, carry away, or damage any plants, fruits, plant products, or nursery stock contained within any nursery or private or public property without the consent of the owner of the property or his agent," reads county code section 21-118. A violation could result in a $200 fine.

It might be worth noting that if you're sneaking into someone's yard to grab fruit without telling them, you're also likely guilty of trespassing — a second-degree misdemeanor in Florida, punishable by up to 60 days in jail.

Should you rent a home that happens to have a mango or other fruit tree on the premises, Barman says, you should be able to harvest fruit from the tree unless the landlord explicitly exempted you from doing so in the lease agreement.

"Usually when you rent, you have rights to possession by default unless there's something specific that says you don't," he explains.

If you're on the other side of the equation and you happen to catch someone stealing fruit from your tree, your best course of action (besides talking it out like civilized neighbors) is to call county code enforcement for the stolen mangos and the police for trespassing. In the event that the value of purloined mangos exceeds $20,000, the theft would be considered a felony under Florida law.

So is it kosher to pluck a mango or two from your neighbor's tree while you're strolling down the street? If the fruit is still on the tree and the owner doesn't give you permission, you're probably better off heading to the produce section at the grocery store or hailing a fruit vendor from your car.

That said, Barman ventures that if you ask nicely, chances are most Miamians will be happy to share their bounty.

"I tell my students that if we followed the rules from kindergarten, we wouldn't need most laws," says the attorney. "Play nice, and if your tree has a lot of fruits, be a good neighbor and share it. And if you want some fruits, don't just presume you can take them — ask first."
KEEP MIAMI NEW TIMES FREE... Since we started Miami New Times, it has been defined as the free, independent voice of Miami, and we'd like to keep it that way. With local media under siege, it's more important than ever for us to rally support behind funding our local journalism. You can help by participating in our "I Support" program, allowing us to keep offering readers access to our incisive coverage of local news, food and culture with no paywalls.
Make a one-time donation today for as little as $1.