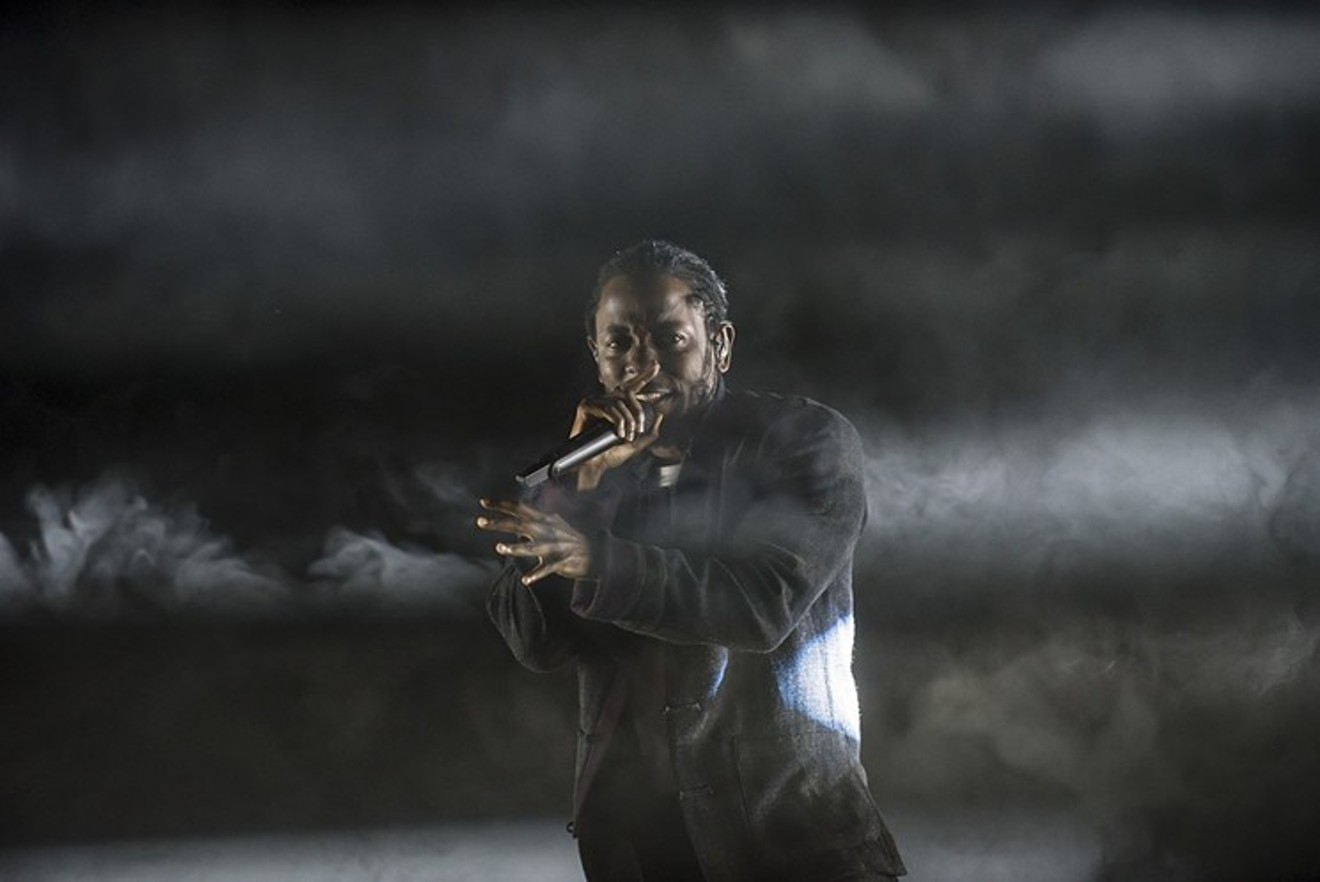 Most people in the U.S. are preparing for cookouts and parties to last them throughout the long Labor Day weekend. Kudos to you if you're one of them. But this guide goes out to all the service industry soldiers, bartenders, waiters, and hotel staff who'll have to work twice as hard while everybody else is on vacation. No matter who you are, here's hoping you find time to enjoy at least a couple of these weekend events. You might have seen it at your local bookstore — the nondescript cart full of cellophane-wrapped or pastel zines, chapbooks, and printed materials of all kinds known as Exile Books' pop-up. But the nomadic lifestyle makes one weary, so the independent book seller and publisher is settling down in Little Haiti. For Exile Books' grand opening, the shop will unveil a mural by artist Lawrence Weiner and launch programming to include art by local women artists and access to design and content consultation. Support the growth of this hometown literary institution by joining the party. 6 p.m. Friday at Exile Books, 5900 NW Second Ave., Miami; exilebooks.com. Admission is free.

Few songs get most '90s kids all in their feelings. Sure, everybody knows the lyrics to "Juicy," and they'll even put away their pride for "Spice Up Your Life," but play the first few chords of "Iris" by the Goo Goo Dolls, and the waterworks start flowing. If you want an evening of women crying and dudes with sweeping bangs, head to this concert in downtown. 8 p.m. Friday at Bayfront Park Amphitheater, 301 Biscayne Blvd., Miami; 305-358-7550; bayfrontpark.amphitheatermiami.com. Tickets cost $25 to $80.

You already know Heart for its techno benders and jungle interior even if you don't quite remember everything you've done there. To celebrate two years of uhntz, the nightclub is throwing a double feature of electronic music royalty. Two Years of Heart will begin with Toolroom Records founder Mark Knight this Friday, followed by Detroit native Stacey Pullen Saturday. Expect support from other DJs to keep the party going as long as physically possible, typical of one of the best clubs in the world. 11 p.m. Friday and Saturday at Heart, 50 NE 11th St., Miami; 617-580-2889; heartnightclub.com. Tickets cost $10 to $30 per night.

The Pickle has been a haven for fans of house, techno, and minimal. To celebrate Four Years of Sünde, the club will present a lineup that includes Spanish DJ and label owner Javier Carballo. His experience spinning all over the world should be enough, but Carballo will also get support from an international group of DJs: Madrid's Alex Serna, Puerto Rico's Diego Devoto, and Brooklyn's Steve Amoroso. 10 p.m. Friday at Electric Pickle, 2826 N. Miami Ave., Miami; 305-456-5613; electricpicklemiami.com. Admission costs $10 to $20.

For the past two years, Calle Ocho staple Ball & Chain has been celebrating its birthday with a festival of epic proportions, and this year is no different. Over the course of three days, the Ball & Chain Music Festival will present more than 20 bands and four DJs to keep the Chain bumping with Latin beats. If it's a Miami band you're looking for, you'll find almost all of them here, including Palo!, Electric Piquete, Electric Kif, Spam Allstars, SonLokos, and Elastic Bond. So here's to 80 more years of Caribbean music in the Magic City. Noon Friday through Sunday, September 3, at Ball & Chain, 1513 SW Eighth St., Miami; 305-643-7820; ballandchainmiami.com. Admission is free.

Whether you've been a fan since the first Friday movie or only vaguely know him from the one time you watched Rush Hour, you'd probably recognize Chris Tucker's yelp. Tucker didn't stop at martial-arts comedy, though, as evidenced by his role in Silver Linings Playbook and his return to standup. Peep what the comedian has to say about his famous friends and life, no doubt with his characteristic energy. 8 p.m. Saturday at Hard Rock Live, 1 Seminole Way, Hollywood; 954-797-5531; seminolehardrockhollywood.com. Tickets cost $30 to $70.

Respectable Street remains West Palm's live music and hip dance stronghold. And with print papers shutting down across the nation, PureHoney Magazine is still publishing articles and local concert showtimes in a beautiful package that doubles as a keepsake. Together with Voltaire and Subculture Alley, these powerhouses of sounds and substance are putting on Bumblefest, presenting 22 bands, including Deaf Poets, Pocket of Lollipops, Peyote Coyote, and Jellyfish Brothers, on four stages for two days of well-curated, crowd-pleasing shows. 6 p.m. Saturday and Sunday at Respectable Street, 518 Clematis St., West Palm Beach; purehoneymagazine.com. Admission costs $5.

Fela Kuti was a Nigerian Afrobeat multi-instrumentalist and human-rights activist whose legend continues to inspire those making art and political change in every country and medium. Coconut Grove gallery Kroma Art Space is celebrating his memory with Felaspora, which brings together visual artists' of the African diaspora and displays their creations September 3 through November 4. Further demonstrating Kuti's impact, related speakers, workshops, and performances will expand minds and focus on the way art can heal and be revolutionary. 7 p.m. Saturday at Kroma Art Space and Studios, 3670 Grand Ave., Coconut Grove; kromamiami.com; felaspora.com. Admission is free with RSVP to [email protected].

It's not Kendrick Lamar's fault that he makes other rappers in the game right now look like jokes — there just aren't many lyricists out there who can snatch our proverbial wigs like Kung Fu Kenny. Though the artist has far from shunned Miami — he performed here during Art Basel and Rolling Loud — our appetite for the living legend is voracious enough that he can make a killing here every few months. If you're ready to be humbled, whether for the first or the third time, you can catch Lamar on his Damn tour this weekend. 7:30 p.m. Saturday at American Airlines Arena, 601 Biscayne Blvd., Miami; 786-777-1000; aaarena.com. Tickets cost $75.50 to $434. Not everyone thinks of pairing tequila with country music, but the two are actually a tasty duo. This Sunday, Tequila Bay Country Music Festival, hosted by Loud and Live, will blast through Miami Marine Stadium Park. And it has some big names to spice up your mezcal margarita with a little twang, including Brantley Gilbert, Kip Moore, Montgomery Gentry, Tyler Farr, and RaeLynn. With food, booze, and strumming guitars, Biscayne Bay has never seen so many cowboy hats and cutoffs. And that's saying something. 11 a.m. Sunday at Miami Marine Stadium Park, 3501 Rickenbacker Cswy., Key Biscayne; tequilabayfest.com. Tickets cost $55 to $150.

Miami is a hotbed for electronic music. The promoters at BLNK CNVS are dedicated to making sure that continues to be a fact. With Deadbeats Miami, they'll present Zeds Dead, Slander, Space Jesus, and other EDM notables. At this 18-and-older event, they'll fill the massive Mana Wynwood with sound, lights, smoke, and unforgettable beats. 9 p.m. Sunday at Mana Wynwood, 318 NW 23rd St., Miami; facebook.com/BLNKCNVSPresents; bit.ly/DeadbeatsMIA. Tickets cost $30 to $35.

The dimly lit, boozy South Beach bar Foxhole is ready for the onslaught of Labor Day partiers. Each year, the watering hole fills with regulars and those looking to explore what SoBe has to offer in terms of hookups and intoxicants. DJs Rascal and Tony G will man the decks till 5 in the morning, so dancing will ensue. 9 p.m. Sunday at Foxhole, 1218 14th Ct., Miami Beach; foxholebar.com. Admission is free.

Caribbean culture has always dominated South Florida, but lately it seems the cultural tide is rising for those born in the nearby tropical islands. This Labor Day, there are multiple ways to enjoy Afro-Caribbean heritage, but the chic way is with Ankara Miami. The group is dedicated to redefining African cultural trends and, thus, is putting on the Afrobeats Day Party. DJs Aya from Cameroon and Jumbee from Trinidad will spin soca, dancehall, compas, hip-hop, and R&B. Wear your finest African prints for the steamy weather. 4 p.m. Sunday at Tapelia Brickell (El Capo), 1250 S. Miami Ave., Miami; ankaramiami.com. Admission is free with RSVP by September 2 before 5 p.m., $10 after 5 p.m., and $15 at the door. Ages 21 and up.

Can you believe Green Day formed in 1986? The band of onetime young punks headed by Billie Joe Armstrong is no longer young but is still wearing eyeliner and touring. The group will hit the amphitheater scene at Coral Sky and around the country in support of its 12th studio album, Revolution Radio. Catfish and the Bottlemen will also perform. You might not know any of Green Day's new tunes, but your Dookie favorites will probably still make Billie Joe's set list. 7 p.m. Sunday at Coral Sky Amphitheater, 601-7 Sansburys Way, West Palm Beach; 561-795-8883; livenation.com. Tickets cost $27 and up.