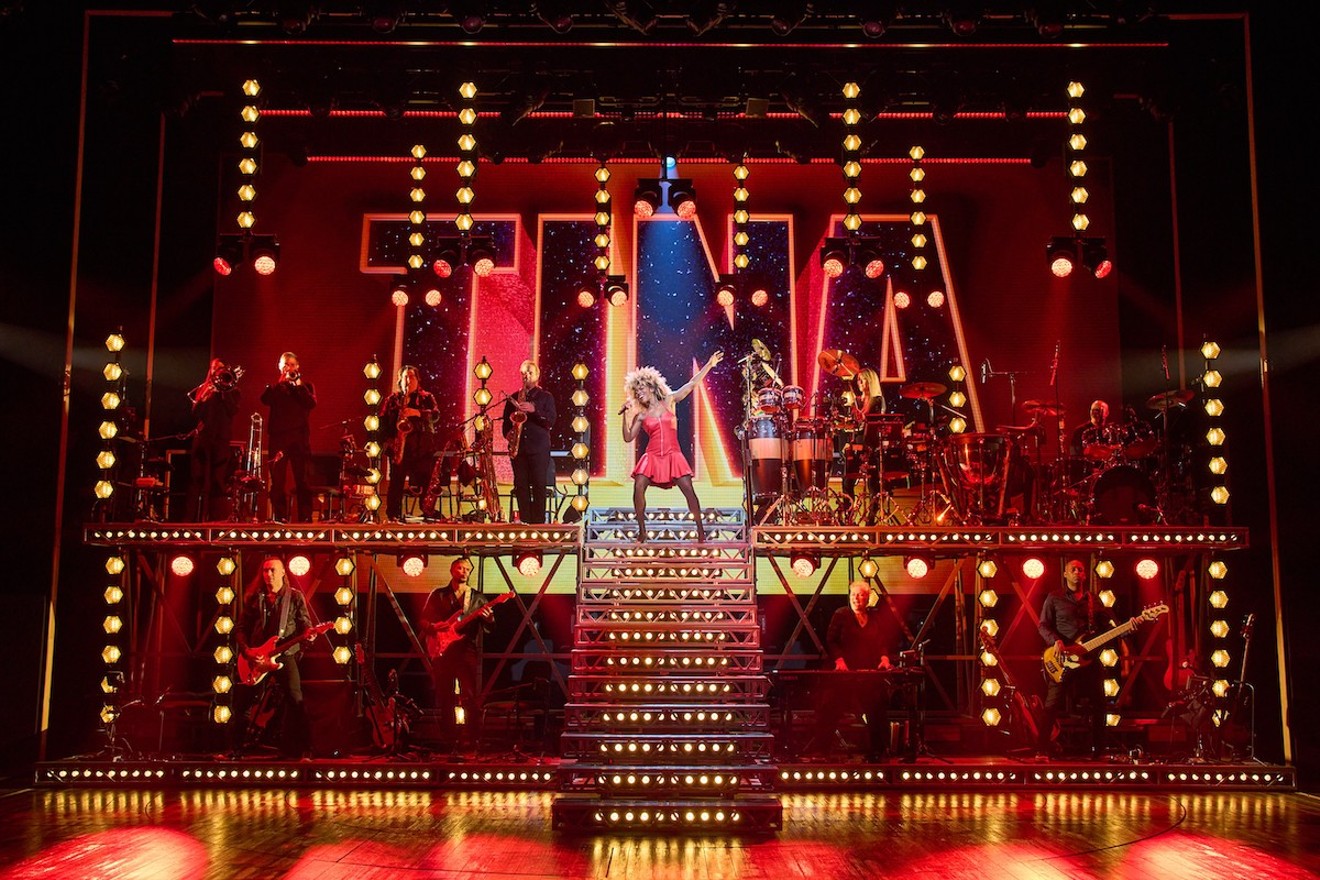 On Monday, head to the epicenter of Black Miami for the 46th-annual Martin Luther King Jr. Day Parade. Hosted by the Martin Luther King Jr. Parade & Festivities committee, the event honors Dr. King's life and his dreams of unity, freedom, social and economic equality, and justice. Taking place in the heart of Liberty City, it's one the oldest and largest MLK celebrations, following the eight miles of sacred ground that Dr. King traveled during his frequent engagements in Miami. 11 a.m. Monday, along NW 54th Street between 10th and 32nd avenues, Miami; mlkparadeandfestivities.org. Admission is free. Ashley-Anna Aboreden

On Tuesday, HistoryMiami Museum invites you to dive into the city's rich history at its Sip of History series. This week, Rahsaan "Fly Guy" Alexander, photographer and curator of "Capture: A Portrait of the Pandemic," will be in conversation with Marlon Hill, exploring how it affected Miami's communities in 2020. The conversation is paired with a Miami-inspired cocktail created by mixologist Gabriel Urrutia. 6:30 to 9 p.m. Tuesday, at HistoryMiami, 101 W. Flagler St., Miami; historymiami.org. Admission is free with RSVP. Ashley-Anna Aboreden

Premiering in 2018 in London's West End, Tina: The Tina Turner Musical is a jukebox musical about the life of the Queen of Rock' n' Roll. It's been nominated for Olivier, Tony, and Drama Desk awards throughout its original run on the West End and Broadway. Now the musical makes its way to the Broward Center for the Performing Arts on Tuesday through January 29. Prepare to groove to Tina favorites like "A Fool in Love," "Proud Mary," "River Deep Mountain High," and "Private Dancer." 8 p.m. Tuesday through January 29, at the Broward Center for the Performing Arts, 201 SW Fifth Ave., Fort Lauderdale; 954-462-0222; browardcenter.org. Tickets cost $36 to $125 via ticketmaster.com. Jose D. Duran

On Wednesday, Oolite Arts debuts its latest exhibition, "Good Times." Featuring works by multidisciplinary artist Chris Friday, the showcase explores the depiction of Black bodies and their presence, or lack thereof, in contemporary art spaces. Friday's work encompasses personal narrative, popular culture, and communal ritual concepts, illustrated in forms such as drawings, videos, sound, and sculptures. The exhibition calls for viewers to dive into the notion and ideology of Blackness and how to give communities their own space to express themselves through celebration, dialogue, and reflection. Noon to 5 p.m. Wednesday, at Oolite Arts, 924 Lincoln Rd., Second Floor, Miami Beach; 305-674-8278; oolitearts.org. Admission is free. Sophia Medina

Is your idea of a thrilling night watching episode after episode of Antiques Roadshow? You're in luck: The Original Miami Beach Antique Show returns on Thursday for five days of vintage finds. More than 600 vendors will set up at the Miami Beach Convention Center to showcase sought-after antiques, from jewelry and handbags to furniture to art, from brands and designers like Louis Comfort Tiffany, Rolex, Cartier, Patek Philippe, and Hermès. Once you've shopped (or ogled) to your heart's content, you can avail yourself of an educational tour and learn the history behind the merch. 11 a.m. to 7 p.m. Thursday through Sunday and 11 a.m. to 4 p.m. Monday, at the Miami Beach Convention Center, 1901 Convention Center Dr., Miami Beach; originalmiamibeachantiqueshow.com. Tickets cost $30 to $50. Sophia Medina

Travel back in time to when dinosaurs roamed the Earth at the Jurassic World Live Tour. Taking place at the Watsco Center on the University of Miami campus, the family entertainment experience brings the fun and excitement of the blockbuster movie franchise to life. You'll find yourself in the jungles of Isla Nublar among life-size dinosaurs, including fan-favorite velociraptor Blue and a Tyrannosaurus rex. You'll be smack in the middle of a crisis, watching scientists attempt to save a new dinosaur from suffering a terrible fate. The show includes one-of-a-kind stunts and an original storyline you'll remember for millions of years. 7 p.m. Thursday and Friday, 11 a.m. 3 and 7 p.m. Saturday, and 1 and 5 p.m. Sunday, at Watsco Center, 1245 Dauer Dr., Coral Gables; jurassicworldlivetour.com. Tickets cost $18.75 to $115 via ticketmaster.com. Sophia Medina

ScreenDance Miami returns for its ninth year with a mixture of films that capture the art of screendancing — dance performances explicitly made to be caught on camera. For the general public, the event kicks off on Thursday with a screening at the Miami Theater Center. Films on deck include Sean Dorsey Dance: Dreaming Trans and Queer Futures, a short film by Sean Dorsey and Lindsay Gauthier; the Florida premiere of Vanessa Sanchez and John Jota Leano's Ghostly Labor; Here Goes the Neighborhood…, a short work by Alethea Pace. The festival continues through January 27 at SoundScape Park, Pérez Art Museum Miami, and O Cinema South Beach. 7:30 to 9:30 p.m. Thursday, at Miami Theater Center, 9806 NE Second Ave., Miami Shore; miamilightproject.com. Admission is free with RSVP via eventbrite.com. Jose D. Duran 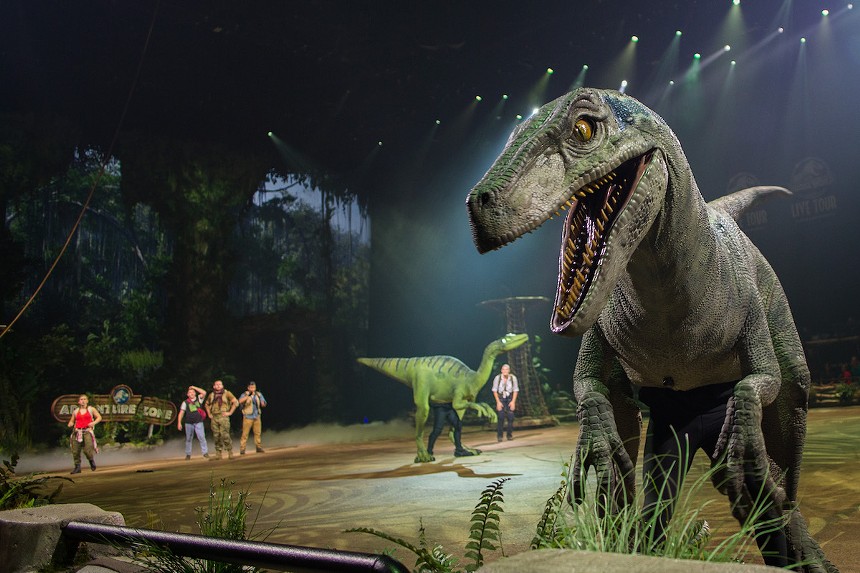 On Friday, University of Texas ethnomusicologist Robin Moore will attempt to answer the question: Where did salsa — the style of music — come from? The discussion, entitled "The Birth of Salsa in New York City," is based on the Wolfsonian's current exhibit, "Turn the Beat Around" (on view through April 30), which explores how Cuban and American musicians produced new musical forms by riffing off their neighbors. Moore's talk focuses on how Puerto Rican, Cuban, and Dominican musicians in New York City developed the salsa genre by uniting mambo, cha-cha-chá, and conjunto. 7 p.m. Friday, at the Wolfsonian, 1001 Washington Ave., Miami Beach; 305-531-1001; wolfsonian.org. Admission is free with RSVP. Ashley-Anna Aboreden

You won't have to travel to Park City to check out some of the year's best short films. On Friday, O Cinema premieres the Sundance Film Festival Short Film Tour 2022, a 95-minute program that features seven film shorts curated from the film festival's shorts program. Three of the seven films won awards, including If I Go Will They Miss Me, Stranger Than Rotterdam with Sara Driver, and Warsha. For decades, Sundance has been considered the premier showcase for short films that range from documentaries to animation and fiction. 9 p.m. Friday through Thursday, January 26, at O Cinema South Beach, 1130 Washington Ave., Miami Beach; 786-471-3269; o-cinema.org. Tickets cost $9 to $11. Ashley-Anna Aboreden

Willy Wonka may not be opening his doors to the chocolate factory, but Fairchild Tropical Botanic Garden is inviting you to its chocolate wonderland. A Festival of Chocolate celebrates the velvety confection's rich taste and luscious decadence. Indulge in various chocolate pairings with wines and spirits, unlocking robust flavors and amplifying your taste buds. Beyond the tasty treats, the festival offers a plethora of activities, from live entertainment to classes that dive into the world of chocolate. 10 a.m. to 5 p.m. Saturday and Sunday, at Fairchild Tropical Botanic Garden, 10901 Old Cutler Rd., Coral Gables; 305-667-1651; fairchildgarden.org. Tickets cost $11.95 to $24.95. Sophia Medina

For the first time, Wynwood's Asian food hall 1-800-Lucky hosts a celebratory bash in honor of the Lunar New Year. For two days only, the space will invite seven food vendors to serve seven special meals not typically served at the establishment and believed to impart luck, including longevity noodles, coconut jelly rabbit dumplings (2023 is the Year of the Rabbit), and good-fortune fruits. Upon entry, you'll receive an envelope that you'll present to each vendor to receive a food item and stamp. Noon to 4 p.m. Saturday and Sunday, at 1-800-Lucky, 143 NW 23rd St., Miami; 305-768-9826; 1800lucky.com. Tickets cost $75 via eventbrite.com. Sophia Medina

Beat the Miami winter heat with an ice-cold beer at the inaugural Somi Beer Festival, presented by Bougainvillea's Old Florida Tavern. More than 90 breweries will share their craft beers for attendees to sample and enjoy. (Did we mention samples are unlimited?) Pair your beer with savory meals offered by various local vendors as you enjoy live music by local band Sunset Dreams. 1 to 6 p.m. Saturday, at Bougainvillea's Old Florida Tavern, 7221 SW 58th Ave., South Miami; 305-669-8577; bougiesbar.com. Tickets cost $40 to $70 via eventbrite.com. Sophia Medina

On Saturday, Nu Deco Ensemble returns to the stage at the Miami Beach Bandshell to deliver another of its programs of classical twists on contemporary sounds. The orchestra will perform four pieces: Jacques Ibert's Divertissement; an original composition by Sam Hyken, Aaron Lebos, Armando Lopez, and Jam Matthews; and a reimagining of Stevie Wonder's 1979 double album Journey Through the Secret Life of Plants. The night culminates with a special collaboration with New York City soul-pop group Lawrence. 8 p.m. Saturday, at Miami Beach Bandshell, 7275 Collins Ave., Miami Beach; nu-deco.org. Tickets cost $70 to $80. Ashley-Anna Aboreden

The Faena Hotel Miami Beach hosts a spirit-awakening session that calls on participants to release love in order to receive it back. Led by the hotel's spa director Augustina Caminos, Twin Hearts Meditation promises to cleanse your auras, calm your emotions, and sharpen your mind. You'll walk away from this spiritual shower with powerful energy and a shimmering aura. 3 to 4 p.m. Sunday, at Faena Hotel Miami Beach, 3201 Collins Ave., Miami Beach; 305-534-8800; faena.com. Donations are encouraged via eventbrite.com. Sophia Medina

On Sunday, head to Wynwood hot spot the Joint of Miami to scope out the city's up-and-coming comedic talent. American Grime's new Comedy Joint Open Mic Night, hosted by Sergio Mendez and MC Jumanji, invites anyone who's brave enough to take the stage. Express yourself any way you please: comedy, poetry, spoken word, or acoustic music. 8 p.m. to midnight, at the Joint of Miami, 2010 NW Miami Ct., Miami; 786-860-5634; thejointofmiami.com. Tickets cost $15 via eventbrite.com; entry is free for the first 50 people with RSVP. Ashley-Anna Aboreden
KEEP MIAMI NEW TIMES FREE... Since we started Miami New Times, it has been defined as the free, independent voice of Miami, and we'd like to keep it that way. With local media under siege, it's more important than ever for us to rally support behind funding our local journalism. You can help by participating in our "I Support" program, allowing us to keep offering readers access to our incisive coverage of local news, food and culture with no paywalls.
Make a one-time donation today for as little as $1.