Photo by Elena Vivas
Across a wooden bar, against a wall of spirits, Matias Aubi looks like any other bartender ready to listen to your woes and make you a drink. But the former advertising exec won't be serving your favorite cocktail in a glass, but rather in a scoop, with one of his and partner Rafa Ramsa's boozy ice-cream concoctions.

Aubi & Ramsa is a 21-and-over shop nestled amid the neon lights and bustle of the Design District. Its modern appearance offers a mature aesthetic wildly different from the bubblegum appeal of most ice-cream parlors. The space is sexy, and the ice cream is even sexier with flavors such as the Highland Truffle, an ice cream crafted with Belgian chocolate and Macallan 12-year single-malt Scotch.

Aubi and Ramsa forged a partnership after growing tired of the advertising world. They craved a business that, Aubi says, "combined both our passions," and because Ramsa comes from a long line of ice-cream makers, the frozen treat seemed to be a natural course. After experimenting with recipes that were served at several well-known eateries in Los Angeles, the partners set their sights on Miami, where their shop opened only weeks ago. The concept has been such a success the two already have plans for expansion, with 30 new flavors and a rumored New York location.

The brick-and-mortar demonstrates the duo's expertise in branding, evident in their Prohibition-era packaging and vintage logo. Aubi, the mastermind behind the flavors, uses only the best ingredients, including top-shelf brands, European imports, and local produce when available. Patrons can also expect collaborations with local vendors in the near future. 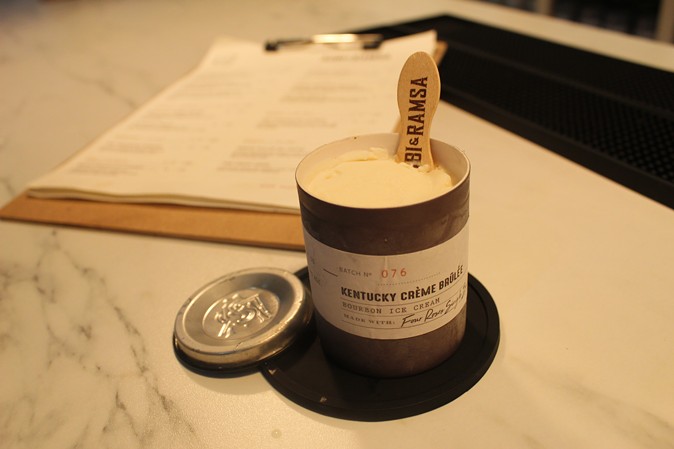 Kentucky Crème Brûlée
Photo by Elena Vivas
The menu, organized by spirit, caters to all drinkers. So whether your vice is whiskey or beer, there's a flavor to suit your taste. Each creation contains 4.9 percent ABV per 3.7 ounces and what Ramsa insists are "the good calories."

Sit at the bar and grab a Mimosa Sorbet or a Mezcal Chocolate Azteca, which is Mexican chocolate ice cream infused with two shots of Del Maguey Vida mezcal and cinnamon.

Other flavors include Kentucky Crème Brûlée — an organic vanilla-pudding ice cream made with two shots of Four Roses single-barrel bourbon and caramelized sugar sprinkles — and Chocolate Mint Martini, made with Veuve Clicquot and Tanqueray No. Ten gin. The ice creams cost $6 to $9 per single serving and are also sold by the pint ($18 to $26, depending upon the spirit), making them a unique party gift. Delivery is also available.

KEEP MIAMI NEW TIMES FREE... Since we started Miami New Times, it has been defined as the free, independent voice of Miami, and we'd like to keep it that way. With local media under siege, it's more important than ever for us to rally support behind funding our local journalism. You can help by participating in our "I Support" program, allowing us to keep offering readers access to our incisive coverage of local news, food and culture with no paywalls.
Make a one-time donation today for as little as $1.
Attorney by day, foodie by night, Elena Vivas is a regular food and beverage contributor for Miami New Times. She was also an expert columnist for Foodable TV and a food editor for tropicult.com.
Contact: Elena Vivas