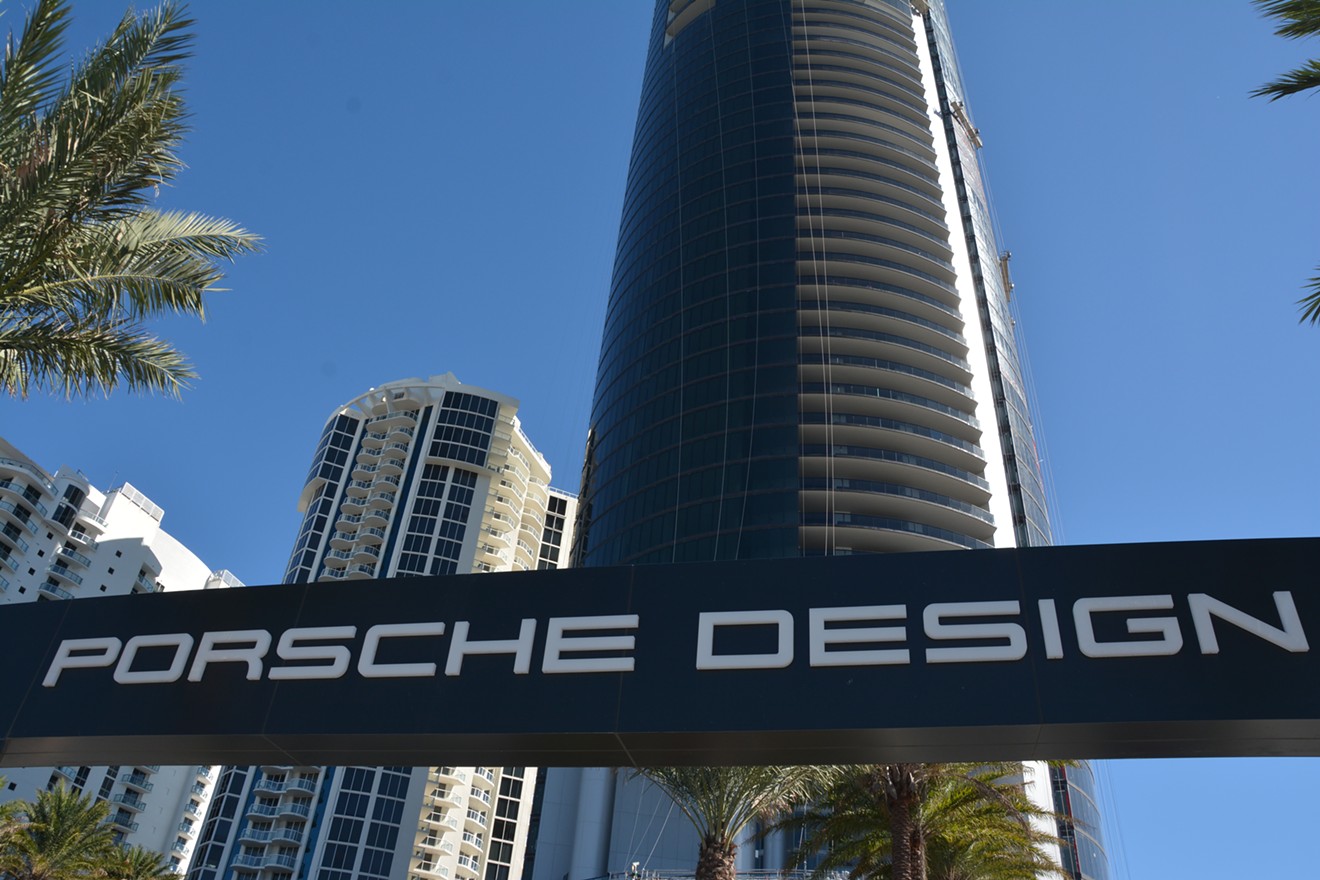 Just a few months later, the developers have been tied to an international money-laundering probe in Brazil looking into whether a Brazilian contractor funneled millions into the United States to avoid taxes.

This past May 9, the Brazilian Federal Police announced they'd launched "Operation Connection Miami," a hunt for a potential money-laundering ring that stretched from the Brazilian state of Santa Catarina to South Florida. A second project, Porsche Design Tower Brava, was proposed in Brazil after a group called Carelli Properties licensed the name from the Dezers. Those licensing payments are now at the center of the Brazilian probe, according to a release from the Brazilian feds.

Two calls to Dezer Development, the family's firm in Sunny Isles Beach, were not returned yesterday, but in a statement to the Daily Business Review, the company confirmed it's aware of the probe and ready to cooperate. "The company and its principals are aware Brazilian authorities have questions about these transactions and are prepared to fully cooperate with the investigation," a Dezer representative told the paper. (Indeed, there is no indication the Dezers committed a crime or are themselves under investigation for wrongdoing in the United States.)

The probe stems from alleged payments a Brazilian construction company made to a shell company in the United States to obtain the Dezer trademark. The Brazilian feds allege the shell company paid the "trademark licensor in the United States under a fraudulent foreign exchange contract so that it could then pay the German company." (That's based on a rough translation of the Portuguese-language news release.) The police allege this was done in order to "avoid higher costs" and Brazilian taxes.

"The Federal Police this morning (9/5) started Operation Connection Miami to dismantle a criminal organization responsible for practicing foreign exchange evasion through fraud in exchange for contracts and money laundering, including abroad," the Brazilian police wrote. "The total amount of fraudulently traded amounts for the U.S. alone may amount to R$ 13 million" in Brazilian reais, which is roughly $4 million in U.S. dollars.

The Brazilians announced they have sent requests abroad to interrogate "three foreign businessmen" — two American and one German. (It's unclear from the Brazilian news release whether the inquiry involves the Dezers.) The Brazilian group is charged with varying counts of fraud, "criminal association," and money laundering, and some members of the alleged ring could face more than a decade in prison.

The Dezer group tells the Daily Business Review it has no idea what Carelli might or might not have been doing with its money. "Dezer Development... satisfied its obligations under the master license by paying royalties and fees to the owner of the trademark in Germany," the company said. "However, Dezer Development has absolutely no knowledge of the process Carelli used to transfer license fee money from Brazil to banks in the United States."

Dezer Development has been one of the most prominent Miami-area luxury developers for more than a decade. A 2004 New Times profile painted Gil Dezer, Michael's son, as a brash rich kid with an abiding love for all things Trump. The Dezers partnered with Donald Trump to build Sunny Isles' Trump Grande Ocean Resort & Residences more than a decade ago — at the time, Gil admitted to having written a book report about Trump's Art of the Deal and said he'd modeled his business practices after the then-developer.

Gil Dezer in 2004 faced a string of sexual harassment and verbal abuse allegations from former colleagues, which the then-ponytailed Dezer denied. "I yell and scream, and 15 minutes later it's like nothing happened," Dezer told New Times in 2004. "My close circle gets it. They say, 'Oops, I fucked up!'"

Presciently, Gil's then-fiancée joked 13 years ago that he ought to run for president.

Roughly a year ago, the U.S. government announced it would begin monitoring all-cash real-estate transactions in Miami-Dade County out of concern that money laundered from Russian, Eastern European, or Latin American criminals is flooding the South Florida real-estate market. Dezer has long maintained that his companies thoroughly scope out any shell companies buying at his properties.