Seven South Florida Hard Seltzers to Get You Ready for Summer J. Wakefield Brewing has created a number of hard seltzers featuring flavors their beer fans know and love. Photo by Nicole Danna
When hard seltzer first came on the scene, no one could have guessed its future as the next craft-beverage boom. But its growing popularity goes hand in hand with the trend to embrace more health-conscious drinking habits, especially among millennials.

No one knows this better than Eddie Leon, whose M.I.A. Beer Company was the first Miami brewery to make hard seltzer, debuting its Hrd Wtr in 2016.

“Hard seltzers have positioned themselves at the nexus of convenience and health,” Leon tells New Times. "It's here to stay."

These carbonated, water-based hard seltzers are essentially ready-to-drink cocktails, most ranging from 4.5 percent to 6 percent ABV. Made from either malted barley or fermented sugar — or an apple base like the one M.I.A. uses to make its Hrd Wtr+ — the breweries even boast that they're gluten-free. Most contain 100 calories or less per can.

These past six months, hard seltzer's continued appeal hasn't gone unnoticed by South Florida brewers. Since it first hit the market in 2013 with Bon & Viv Spiked Seltzer, the category has grown to include both large- and small-scale breweries looking to take the trend in a more experimental or artisanal direction.

Below, in alphabetical order, are seven South Florida hard seltzers made by local breweries: 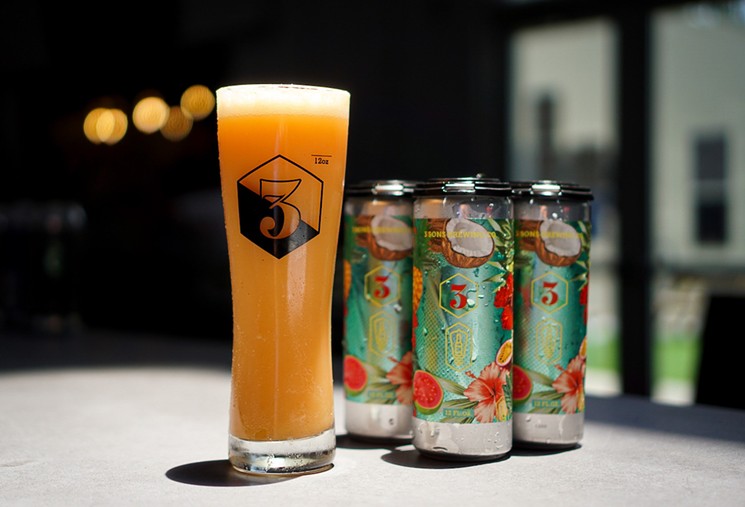 236 N. Federal Hwy., Dania Beach
954-601-3833
3sonsbrewingco.com
One of the more recent contributors to the craft-seltzer scene, 3 Sons brewer/founder Corey Artanis has come out of the gate with his own super-fruited take on the trendy libation. His first release debuted this month, a smoothie-style take in collaboration with California-based Bottle Logic that's flavored with coconut, guava, passionfruit, and pineapple. Dubbed Aloha, it bucks the trend of the lighter, artificially flavored styles you'll find on grocery shelves, clocking in at 9.6 percent ABV and available on draft and in cans. When this batch is gone, expect Artanis to continue exploring the style with future releases. 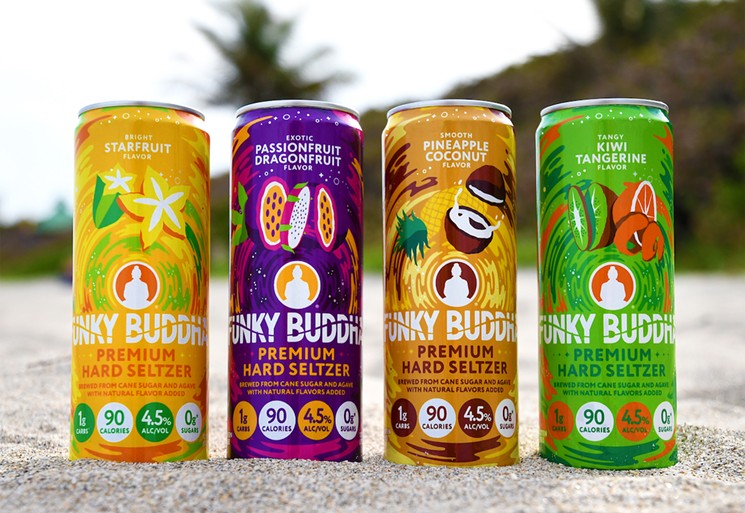 1201 NE 38th St., Oakland Park
954-440-0046
funkybuddhabrewery.com
Florida’s imaginative craft-beverage creator Funky Buddha doesn't disappoint with its fruit-forward take on hard seltzer. The brewer is so confident in its product, it even created a Super Bowl commercial in honor of its most recent rollout. More than a dozen flavors are available in variety 12-packs, including a new line of tropical flavors adding starfruit, passionfruit-dragon fruit, pineapple-coconut, and kiwi-tangerine to the mix — all available exclusively in the state of Florida. The seltzers boast 90 "Funky" calories, one gram of carbohydrates, and zero grams of added sugar. 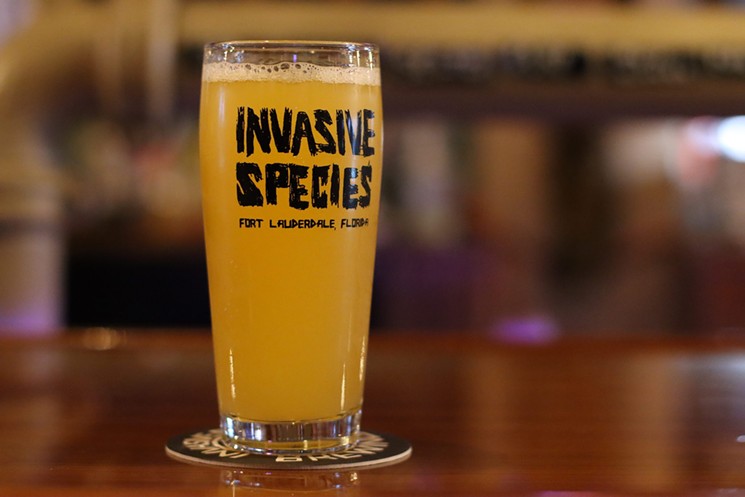 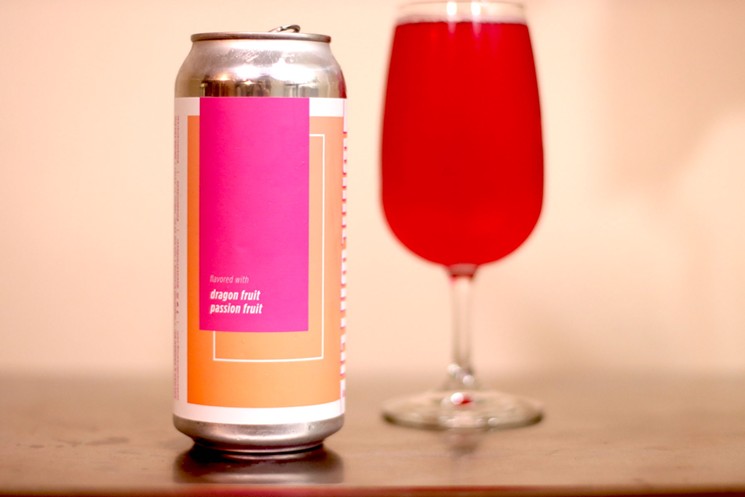 120 NW 24th St., Miami
786-254-7779
jwakefieldbrewing.com
In May 2020, J. Wakefield Brewing launched its very first Wake Water — the Miami brewer's take on Florida-inspired, fruit-flavored hard seltzer. The inaugural batch was flavored with guava, passionfruit, and mango — a tribute, no doubt, to Wakefield's famous Berliner, Miami Madness, which is made with those same fruits. Similarly, the next was an ode to another J. Wakefield favorite, the DFPF, a pink-hued hard seltzer with dragon fruit and passionfruit. The idea is to use fresh tropical ingredients as the sour beers the brewery is known for producing. In the past several months, additional flavor combinations have hit the canning line — there's seemingly no end to the fruit-inspired takes you'll find from one of Miami's favorite brewers. 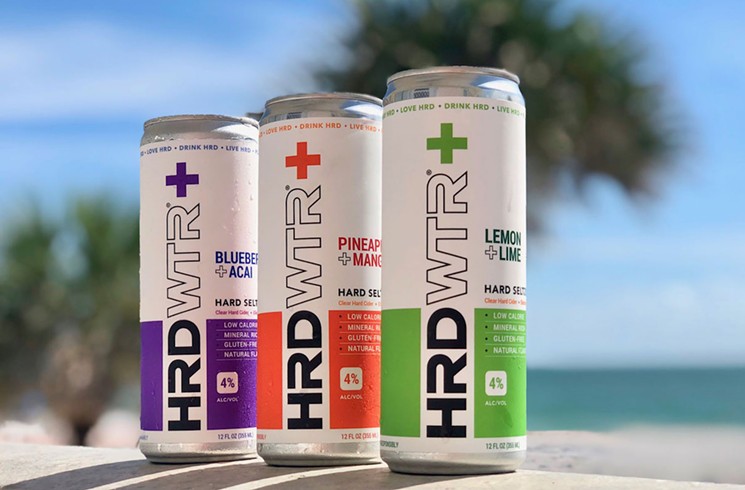 Unbranded's hard seltzer is made with champagne-grape yeast.
Photo by Nicole Danna

1395 E 11th Ave., Hialeah
786-332-3097
unbrandedbrewing.com
Miami's Unbranded Brewing separates its hard seltzer from the rest with one very special ingredient: Champagne yeast. The resulting liquid is dry and bubbly, a moderately sweet take on hard seltzer that pours a beautiful golden hue. Ringing in at a moderate 8 percent ABV, the seltzer is available at the Hialeah taproom on draft or in cans to-go. 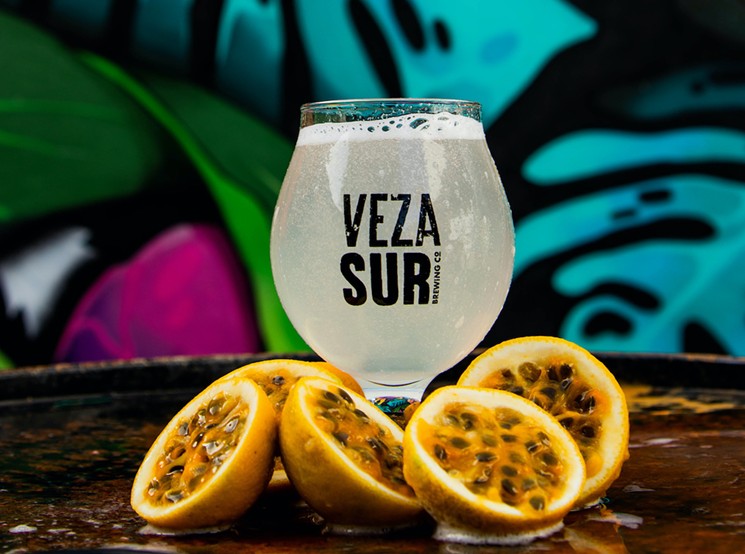 55 NW 25th St., Miami
786-362-6300
vezasur.com
This summer, Veza Sur will release its new spiked seltzer, Lucita. The focus here: Latin American-inspired flavors. Lucita offers a hint of tropical flavors in its line, including guava-lime, passionfruit, grapefruit, and mango. The seltzer will be available for purchase at the brewery, in variety 12-packs in local supermarkets, convenience stores, and liquor shops throughout South Florida. this summer. (For every 12-pack sold, Veza Sur will donate $1 to the Coral Restoration Foundation, a Florida-based, nonprofit organization that's dedicated to restoring coral reefs to a healthy state.)
KEEP MIAMI NEW TIMES FREE... Since we started Miami New Times, it has been defined as the free, independent voice of Miami, and we'd like to keep it that way. With local media under siege, it's more important than ever for us to rally support behind funding our local journalism. You can help by participating in our "I Support" program, allowing us to keep offering readers access to our incisive coverage of local news, food and culture with no paywalls.
Make a one-time donation today for as little as $1.