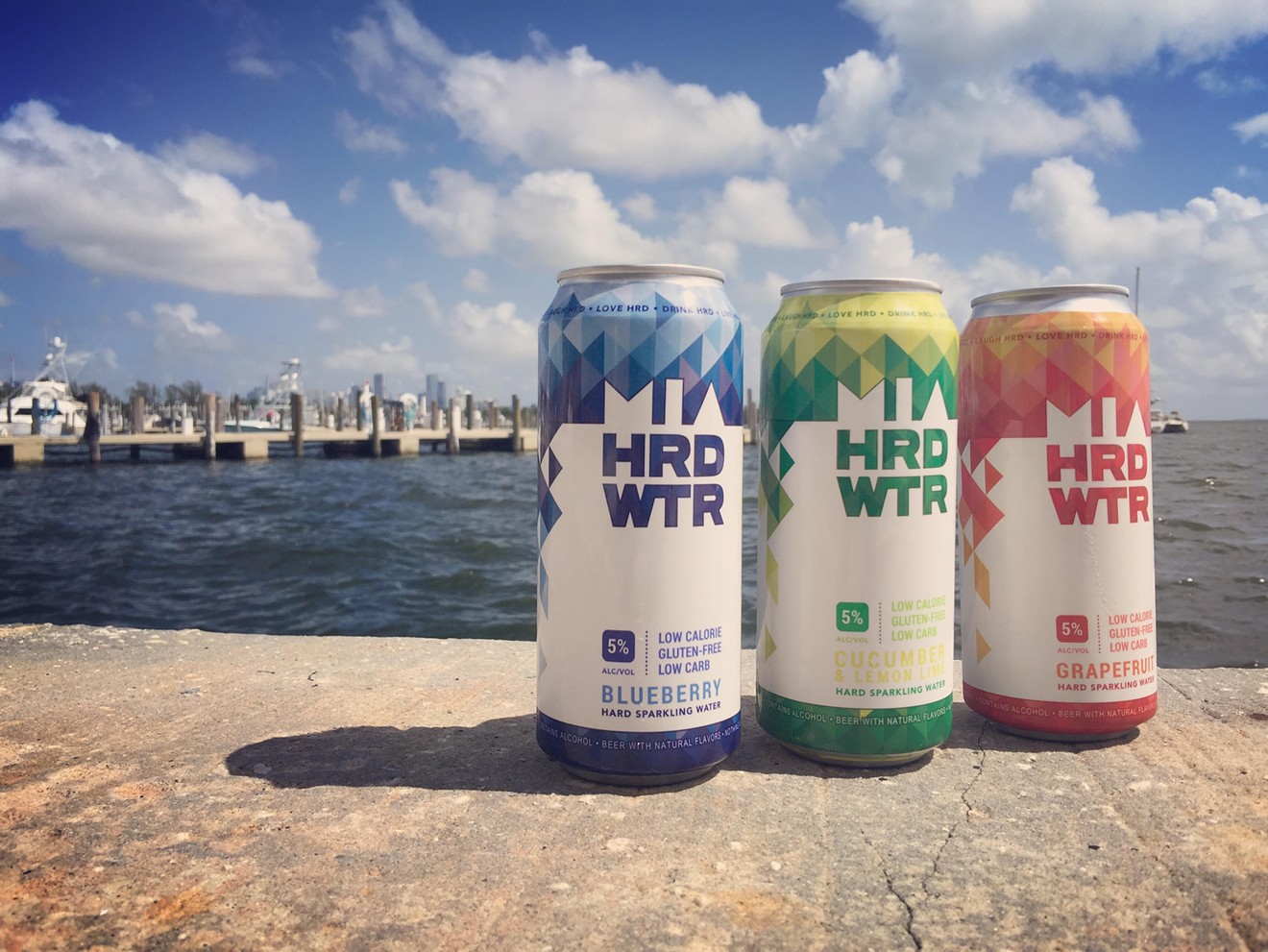 How is M.I.A. Beer Company's HRD WTR made? Courtesy of M.I.A. Beer Co.
Miami breweries have long dedicated their resources to making some of the best craft beer in the state, but the tap list at M.I.A. Beer Co. also includes HRD WTR, a line of alcoholic seltzer water.

Alcoholic seltzer water isn't new. It's been around since at least 2013, according to the website Tasting Table, although M.I.A. is one of the small number of breweries making it. The Boston Beer Company (brewer of Sam Adams) produces Truly Spiked & Sparkling, and Wachusett Brewing Company makes Nauti Seltzer. Both contain 5 percent alcohol by volume. Anheuser-Busch InBev brews SpikedSeltzer, which is a bit stronger at 6 percent ABV.

But unlike the aforementioned breweries, which sell their alcoholic seltzer waters through other websites, M.I.A. proudly peddles HRD WTR on its own site.

The idea for hard water wasn't lost on M.I.A. brewer Michael Demetrus, who at first considered an alcoholic coffee beverage and hard sodas. However, Demetrus says it was difficult to pin down a flavor with the coffee, and he believes hard sodas are on a downturn.

So he decided on hard seltzer.

The final product was scaled back to 5 percent ABV and put on tap. Demetrus says HRD WTR became wildly popular at the brewery. M.I.A. offered it on tap at the recent Great American Beer Festival in Denver, where it was well received, he says.

According to Demetrus, HRD WTR is brewed with champagne yeast, and minerals are added later. He says sugars are used in place of gluten malt.

Technically, HRD WTR is classified as a gluten-free beer, Demetrus says. In addition, it's touted as all-natural and "super-low-calorie" because virtually all of the sugars have been fermented out.

Because of the popularity of HRD WTR, M.I.A. is now canning it and distributing it to bars and restaurants throughout Miami, as well as stores statewide. Soon, Demetrus says, it'll be available in Pennsylvania and Ohio.

HRD WTR is sold in four-packs of 16-ounce cans for about $10. It comes in three flavors: cucumber lemon-lime, grapefruit, and blueberry.

Some people use HRD WTR for cocktails, Demetrus says, particularly gin and vodka mixers. It can also be enjoyed by itself. "It's kind of like LaCroix with alcohol," he says.