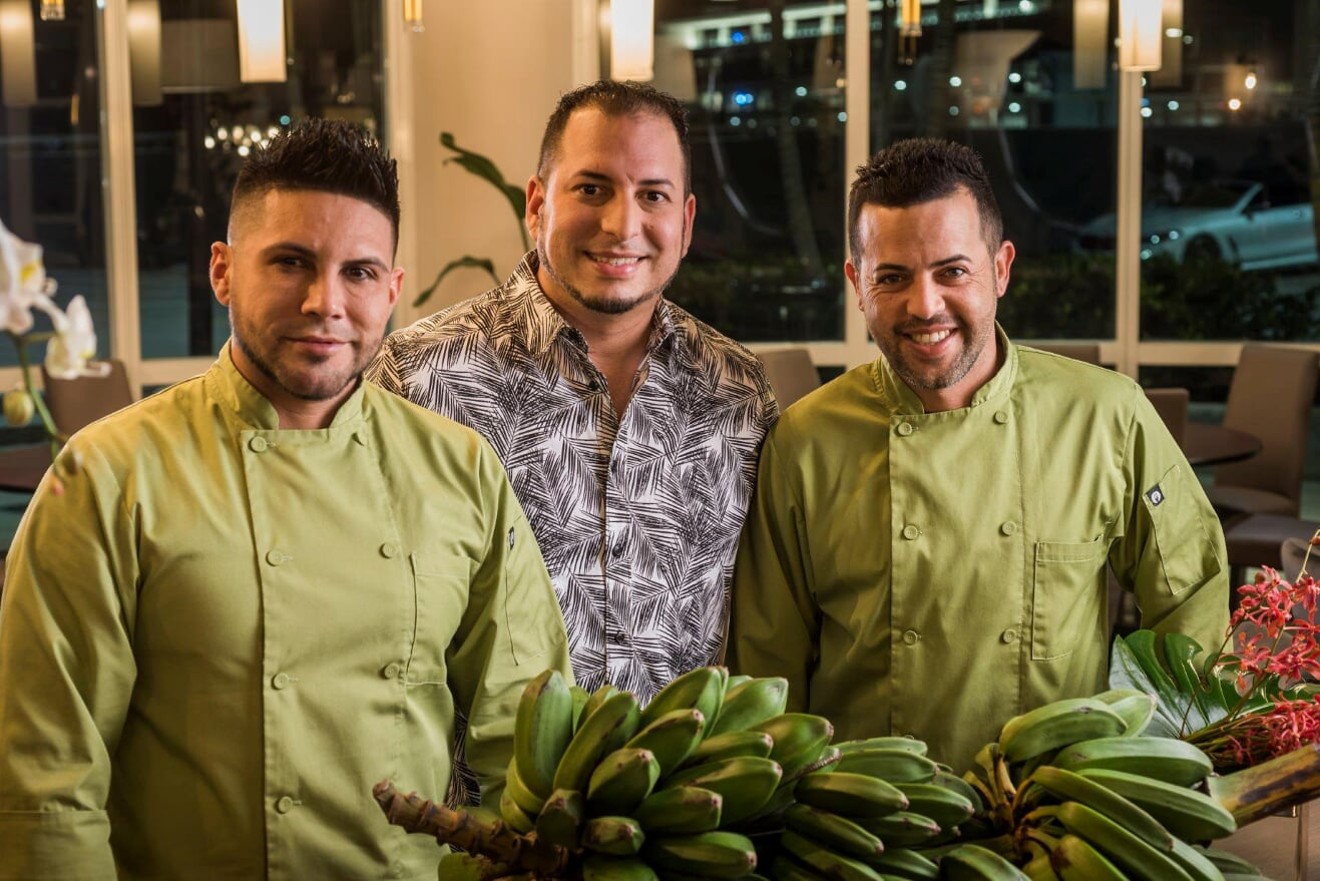 The numbers reference the island of Puerto Rico, which measures 100 miles east to west and 35 miles north to south. Though small, the nation has a rich culture far greater than its square mileage. The rest of the name, Cocina con Raíces, translates to "Kitchen with Roots" and speaks to the island's unique cuisine that has foundations in European, African, and native Taíno cooking styles, mixed with elements of the seas that surround it.

100 x 35 owner Carlos Rodriguez describes his cuisine as "exotic and tasteful," noting that everything on the menu is "made in-house by the chefs."

A businessman who employs 500 people at his insurance company, Rodriguez decided to open a restaurant on South Beach in order to showcase Puerto Rican cuisine in an elegant setting.

"This is a great location," he says of 100 x 35's digs just north of Fifth Street on West Avenue. "It's at the gateway to Miami Beach. It's a beautiful building with a water view." The minimalist design, he adds, allows the colors of the dishes to shine through.

Rodriguez tapped Emmanuel Jimenez, a longtime friend, to create the menu in tandem with fellow Puerto Rican Luis Vazquez. The pair had worked together in both Puerto Rico and Florida for a decade. 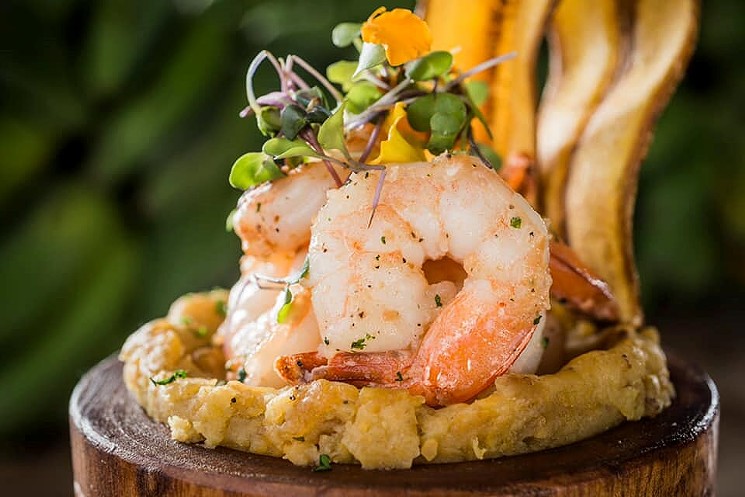 Shrimp mofongo
Photo courtesy of 100 x 35 Cocina con Raíces
The chefs' roots are on display in dishes like a pasta made from malanga (purple taro root) served with a four-cheese sauce and chicken ($18), and a traditional Kan-Kan pork chop (a double loin chop that includes the ribs, belly, and cracklings) served with mixed rice and green plantain mofongo. (Mofongo plays several roles on the menu, offered as mofongo de plátano, mofongo de yuca, mofongo de plátanos maduros, and trifongo, which is made with all three. Diners may add fried pork with onions, chicken, shrimp, or skirt steak to any of the mofongo dishes.

The bar will offer cocktails made with Puerto Rican rums and beer from Wynwood Brewing Company.

100 x 35 debuts this Friday with a soft opening. Rodriguez says the grand opening is planned for July or August. He had originally intended to open in early April, but the coronavirus put an end to that. "We had a two-month delay in opening, but I think we're going to do well," he says. "We're opening at the start of the summer season, and people are worried about going out, but I'm already seeing more and more activity in Miami Beach."

The restaurateur is convinced that the food will lure patrons. "I have the best chefs here. They know how to cook, and the quality of the food is the best in town. We're passionate about recreating these dishes authentically."

100 x 35 Cocina con Raíces at the Bentley Bay. 520 West Ave., Miami Beach; 305-763-8904; facebook.com/100x35cocinaconraices. Sunday through Thursday 11 a.m. to 10 p.m., Friday and Saturday 11 a.m. to 11 p.m. for dining in, takeout, and delivery. Hours may vary.
KEEP MIAMI NEW TIMES FREE... Since we started Miami New Times, it has been defined as the free, independent voice of Miami, and we'd like to keep it that way. With local media under siege, it's more important than ever for us to rally support behind funding our local journalism. You can help by participating in our "I Support" program, allowing us to keep offering readers access to our incisive coverage of local news, food and culture with no paywalls.
Make a one-time donation today for as little as $1.