The Perico old-fashioned Photo by Laine Doss
Cafe La Trova is designed to take you on a bit of a time trip. At any moment of the day, you're apt to find , or sharp-dressed bartenders, deftly throwing daiquiris while swaying to the beat of a band of guayabera-clad musicians playing on a stage. Together they tell the story of a Cuba filled with color and sound.

Mosey to the back of the establishment on a Friday or Saturday evening, and you're likely to get hit with culture shock. You've just traveled from Havana in the 1960s to Miami in the 1980s.

La Trova's backroom, 80's 305 Bar, is a seedy yet colorful celebration of the neon, disco, and drugs that fueled Miami Beach back in the day. The bar, open Friday and Saturday evenings, is a flamingo-pink palace of disco balls, Tony Montana, and Donna Summer. It's an ode to kitsch in danger of becoming a parody of itself — a place destined for bachelorettes to take selfies while consuming shots, if not for its secret weapon: Julio Cabrera.

The and La Trova co-owner tempers the room with a sophisticated drink menu featuring the recipes of some of the greatest contemporary bartenders.

The cocktail menu features a dozen specialty drinks, each priced at $12 (a subtle nod, perhaps, to the '80s inclination to ask everyone's star sign). Cabrera reached out to 10 bar professionals for their personal interpretations of cocktails popular during the decade. One was a house cocktail. The 12th drink was reserved for his friend John Lermayer's own "World's Best Piña Colada." Lermayer's version of the classic frozen drink is made with Don Q rum, spiced rum, Cruzan coconut rum, coconut cream, fresh pineapple, and coffee beans. 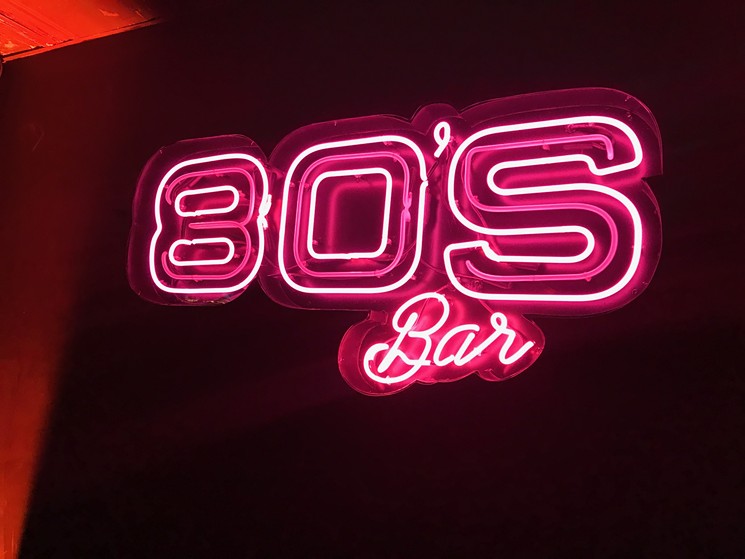 A cosmopolitan reworked by bar legend Dale DeGroff — made with Absolut Citron vodka, Cointreau, lime juice, and cranberry juice — explains why the pink martini drink was the signature cocktail of Sex and the City's Carrie Bradshaw. In its purest form, it's a blush-colored balance of sweet and tart.

The standout drink by far is the Perico old-fashioned. It's made with Diplomatico Mantuano rum, yerba mate syrup, and bitters. It's served on a tray topped with a picture of Tony Montana, a candle, a line (of sugar), and a rolled-up bill. This could make it the most Instagrammed cocktail in Miami.

Sure, the 80's 305 Bar can seem a bit hokey, but with drinks by Julio Cabrera and food by Michelle Bernstein, there's substance to back up all the neon and hype — and for once that substance isn't cocaine.

80's 305 Bar at Cafe La Trova. 971 SW Eighth St., Miami; cafelatrova.com. Friday and Saturday 9 p.m. until late.
KEEP MIAMI NEW TIMES FREE... Since we started Miami New Times, it has been defined as the free, independent voice of Miami, and we'd like to keep it that way. With local media under siege, it's more important than ever for us to rally support behind funding our local journalism. You can help by participating in our "I Support" program, allowing us to keep offering readers access to our incisive coverage of local news, food and culture with no paywalls.
Make a one-time donation today for as little as $1.