Originally built in 1957, the Gold Dust is one of the few remaining buildings once considered part of the "motel capital" of Miami. Located in the heart of the MiMo district on Biscayne Boulevard, the Selina Gold Dust unveiled its new look in November, with Kush concepts slated for the revamped landmark on the south bank of the Little River.

Like every other Kush concept, Cafe Kush will have its own identity: a retro-inspired "Miami-style bistro."

"When I first saw the Selina property, it felt like I was in a café in Europe," Kushner tells New Times. "I took that idea and ran with it."

Playing off the neighborhood's midcentury-modern motif, Cafe Kush makes use of the venue's original diner-inspired space to create a Eurostyle riverside café. Designed in typical Kush style, its walls are adorned with vintage thrift-shop décor and personal artifacts from the Kuscher family, including a French hatbox and an old cookbook of sauces. If that's not enough, diners are invited to place a lock on a metal railing, à la the Parisian "love lock bridge," AKA the pont des arts. 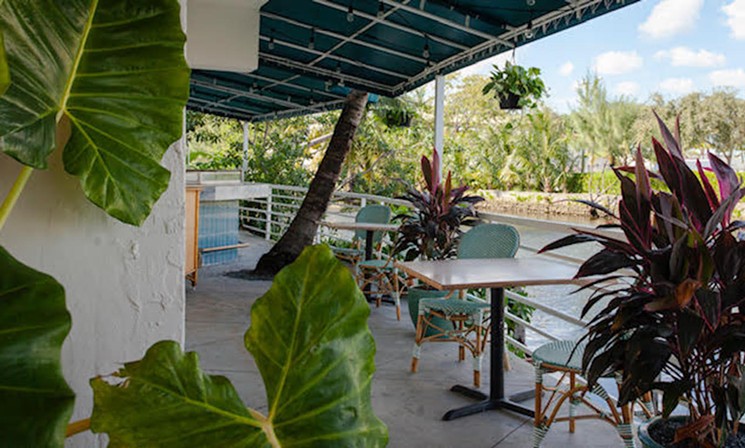 The outside patio at Cafe Kush offers a peaceful waterfront respite off Biscayne Boulevard.
Photo by Victoria Winter for Selina Miami Gold Dust
The menu serves up a number of new dishes alongside familiar Kush comfort classics.

Hors d'oeuvres include French onion soup, frogs' legs, and beef carpaccio ($11 to $15). Among the larger plates: a croque monsieur, ratatouille, coq au vin, and steak frites ($14 to $26). These are served alongside Kush classics from the Lokal salad and Frita burger to chicken & waffles and key lime pie ($9 to $15).

The cocktail menu likewise embraces the European theme, with unique offerings that include a homemade vermouth aged for a month in-house. (A bottle is left at each table, meant to be consumed in the same fashion as the house wines you'd find in Europe, and is charged by consumption.)

Eight signature cocktails are also available, each served in a cigar box and finished with spirit spritzes from vintage perfume bottles ($12 and $13). They include the "Puta Madre" punch (light and dark rums with mixed fruit served in a free souvenir cup) and "La Loquita de West Kendall" (reposado tequila, bell-pepper juice, and agave).

Also available are a selection of aperitifs, European wines, and local beers (including Kaptain Kush, made by nearby Tank Brewing Co.).

Moving forward, the Kush-Selina partnership will add Don's Five Star Dive Bar, a space located below the café that will be themed after notorious Miami dons from the 1970s and '80s.

"It will be like having three restaurants in one," Kuscher says. "When you go upstairs, it's a European café. Outside, you'll get a completely different vibe with alfresco dining on the water. And, later next year, the Don's Five Star Dive Bar will create an entirely unique vibe."

Cafe Kush. 7700 Biscayne Blvd., Miami; 305-985-4764; kushhospitality.com. Opens Tuesday, December 8, 2020.
KEEP MIAMI NEW TIMES FREE... Since we started Miami New Times, it has been defined as the free, independent voice of Miami, and we'd like to keep it that way. With local media under siege, it's more important than ever for us to rally support behind funding our local journalism. You can help by participating in our "I Support" program, allowing us to keep offering readers access to our incisive coverage of local news, food and culture with no paywalls.
Make a one-time donation today for as little as $1.