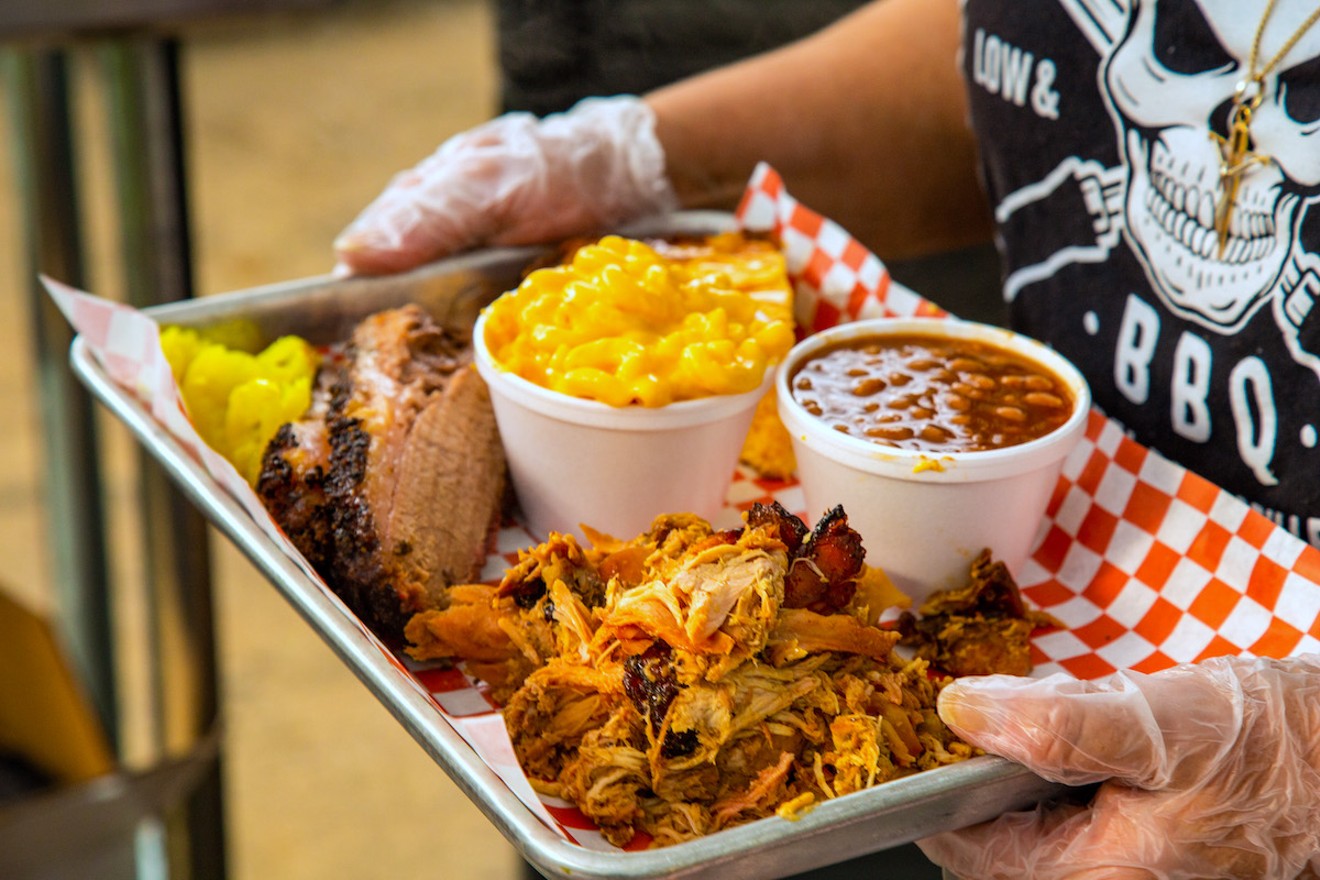 A tray from Apocalypse BBQ Photo courtesy of Apocalypse BBQ
A business that began on a 22-inch Weber Smokey Mountain has since grown into one of the Magic City's favorite barbecue pop-ups and soon will open a permanent location in Kendall.

The creators of the 2-year-old culinary side hustle Apocalypse Barbecue have announced they will be making the move to a new standalone restaurant space later this year.

This week, chef/owner Jeffrey Budnechky and his wife, Laura, told New Times they plan to launch their first brick-and-mortar location at 998 SW 104th St. The venture is in partnership with a longtime customer J.J. Matutina.

The couple say they spent the past several months negotiating the space, a standalone building located at Killian Greens Golf Club. They are hoping to open this winter and will serve breakfast, lunch, and dinner while also offering diners a late-night lounge ambiance.

The decision to go from pop-up to permanent is all part of the Miami native's plan and promise to help define what he believes South Florida barbecue is all about, says Budnechky.

"We always wanted a spot in the Kendall area. We love the vibe here and fell in love with the fact that it's this really cool standalone space that puts us close to where we started the pop-up from my backyard," said Budnechky. "It feels like it's come full circle back to the neighborhood where we got our start and so many people love us."

Apocalypse Barbecue got its start in 2020 as a pandemic passion project. At the time, the self-taught chef was looking for a way to make ends meet when his work as a freelance marketer slowed.

When it opens, Apocalypse will serve a variety of the chef's now famous meats alongside his growing list of smash burgers.

Over the last few months, the Apocalypse menu has offered up a number of iterations, many of them dependent on the location and product sourcing. Today, however, it's best known for marrying the flavors of the chef's Brazilian-Argentinian roots with his wife's Cuban heritage.

That translates into several dedicated menu items Budnechky will continue to serve at the new location. They include pulled pork smothered in a colada-infused barbecue sauce dubbed "oro negro"; massive dino beef ribs dusted in a homemade coffee rub and finished with a lacquering of the chef's own Bustelo-infused cafecito sauce; and four-hour, slow-smoked pork-belly burnt ends braised and glazed in his "guava lava."

New items will feature a smoked turkey, as well as additional classic sides that will join the famous mac 'n' cheese and cornbread made by Laura and her mother, Aida Gutierrez.

For breakfast, expect Budnechky's take on empanadas, croquetas, and breakfast burritos — all with a barbecue twist with sides like brisket, pulled pork, or house-made bacon or sausages.

Moving forward, Budnechky says fans can get their barbecue fix at the new location where he will host a series of regular pop-ups while renovations are underway. Apocalypse Barbecue also will be serving this Sunday from 2 p.m. till sold out at Unseen Creatures, where they'll be hosting a final farewell pop-up.

"There's so much potential in Kendall, and people are hungry for something new, cool, and hip that's not just another commercial franchise concept," sums up Budnechky. "We aren't bringing that Wynwood copy and paste, but a concept created for the community that's all about family coming together, which is what Apocalypse has always been about."

Apocalypse BBQ. 998 SW 104th St., Miami; @apocalypsebbq. Opening winter 2022.
KEEP MIAMI NEW TIMES FREE... Since we started Miami New Times, it has been defined as the free, independent voice of Miami, and we'd like to keep it that way. With local media under siege, it's more important than ever for us to rally support behind funding our local journalism. You can help by participating in our "I Support" program, allowing us to keep offering readers access to our incisive coverage of local news, food and culture with no paywalls.
Make a one-time donation today for as little as $1.