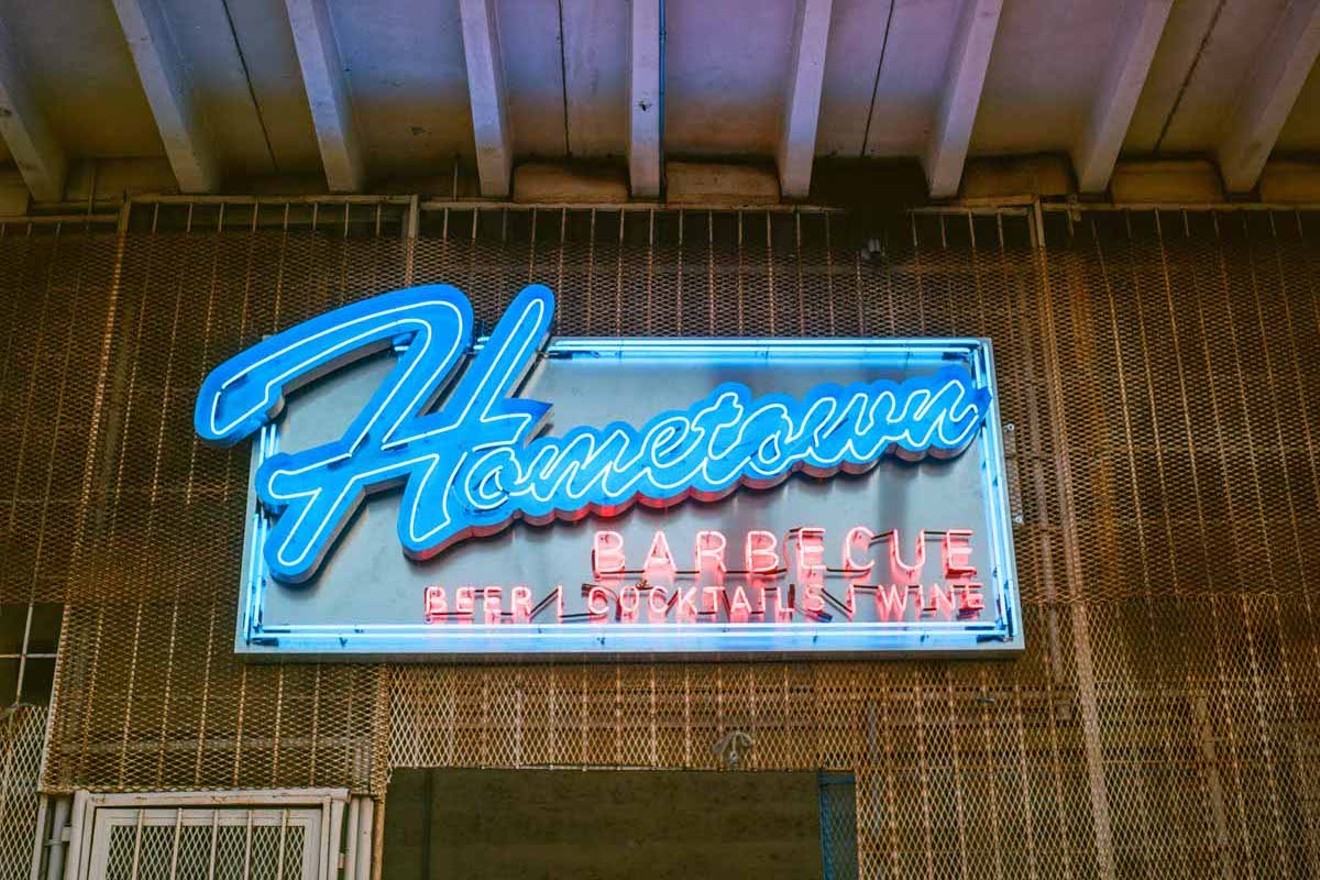 Hometown Barbecue's sign welcomes you for a good meal. Photo by Daniel Krieger
It would be convenient if Miami barbecue were a simple creature: one or two types of meat, a single defining way to cook it, and a sauce or two unique to our tiny slice of the world. But life is never simple, and so it goes with Miami's barbecue scene.

Miami barbecue is the story of the people who make it, who often come from somewhere else, setting up on our sun-bleached streets to bring us a taste of their heritage.

And that's exactly what makes Miami barbecue so good. When viewed through the melting-pot lens, it's easy to see these creations as equal parts soul, love, and family. 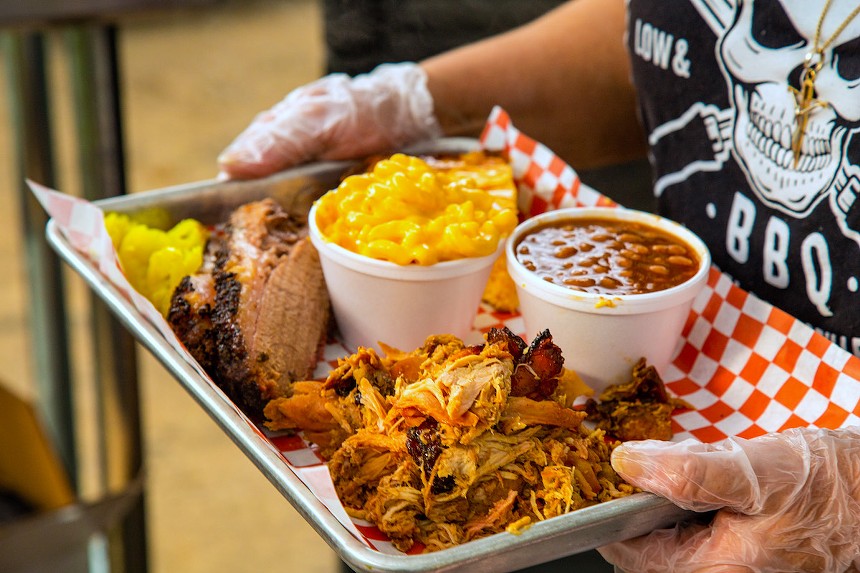 4178 SW 74th Ct., Miami
apocalypsebbq.com
When the pandemic hit, Miami native Jeffrey Budnechky's work as a freelance marketer ground to a halt. A self-described backyard barbecue enthusiast, he took his ten years' worth of grilling experience and said, "F the apocalypse, let's just make barbecue." What began as a handful of orders using a 22-inch Weber grill has since turned into one of Miami's favorite pop-ups, serving a variety of meats that now emerge from the chef's professional 125-gallon tank smoker. Along the way — including an appearance at the 2021 South Beach Wine & Food Festival under his belt — he made a promise to himself to help define South Florida barbecue. To do so, Budnechky marries the flavors of his Brazilian-Argentinian roots with his wife Lara's Cuban heritage. That means pulled pork smothered in a colada-infused barbecue sauce he calls "oro negro," massive dino beef ribs dusted in a homemade coffee rub and finished with a lacquering of the chef's own Bustelo-infused cafecito sauce, and four-hour, slow-smoked pork-belly burnt ends braised and glazed in his "Guava Lava" guava-mango-habanero sauce. Only his Texas-style brisket toes the line of tradition, slow-cooked and seasoned simply with salt and pepper. Find them as sundaes layered atop mac-and-cheese with coleslaw and baked beans. Sides are Lara's and her mother's specialty: a choice of homemade mac-and-cheese or cornbread. Find them every Sunday from 2 p.m. till sold out at Unseen Creatures Brewing near Tropical Park in Miami. 250 NE 167th St., Miami
305-303-2134
bolegsbbq.com
The telltale smoky aroma of Bo Legs BBQ will lead you straight into the heart of North Miami Beach, where this family-run business has been operating for just over a decade. Chef/owner Kevin Dority — AKA Bo Legs — grew up eating his family's barbecue on their farm outside Charleston, South Carolina. These days, it's his own family — wife, two daughters, and son — that helps out with the business, offering customers free samples of meat slathered in secret sauces that date back to the early 1970s. Despite its no-frills looks, you'll find some of the best smoked meats around, from ribs and sausage to brisket, turkey legs, and jerk chicken. Don't miss the baked beans, Bo's signature side, made with a sweet combination of maple, honey, and molasses and a meaty hint of ground chuck for an authentic Carolina take on the traditional side. Then end it all with a slice of homemade sweet potato pie. Drinking Pig BBQ is a front-yard pop-up operation that serves some of Miami's best barbecue.
Photo by Nicole Danna

845 NE 151st St., Miami
instagram.com/drinkingpigbbq
You'll find this pop-up down a one-way street in a North Miami-Dade neighborhood where a simple setup attracts diehard barbecue fans. Drinking Pig BBQ is a joint effort by Kyu executive chef Raheem Sealey and his wife, former Kyu chef Yohanir Sandoval, and former Kyu sous chef Mark Wint. Together, this trio turned their pandemic downtime into a thriving backyard business, offering brisket, sausage, pork, and chicken. Touches of their combined cultural influences give each piece of meat a unique flair, from the sofrito- and thyme-infused rub to the secret seasoning blend in the handmade sausage. Sides include collard greens cooked in a stock made from smoked chicken bones and baked beans prepared with scraps of brisket and short rib. Don't miss Sandoval's cornbread, a cakelike treat that offers a sweet-and-salty take on the classic barbecue staple. The pop-up is open Friday through Sunday from noon until sold out. 2685 NW 105th Ave., Doral
305-646-1339
trippinganimals.com
Opened in November 2019 as the in-house kitchen at Tripping Animals Brewing, Gorilla City Sandwiches offers the best of barbecue for the taproom's hungry patrons. Chef/owner Julien Uribe takes his experience at a Texas smokehouse to create the Texas-style brisket, served alongside a number of meats, plus sides like classic coleslaw, traditional potato salad, baked beans, and roasted mushrooms. Order platters of sliced smoked turkey and pulled pork — or get them in sandwich form. Pair your food with Tripping Animals' fruited sour ales or easy-drinking "No Mames" Mexican-style lager. Don't miss the "Brisket Sando," a half-pound of meat stuffed between two slices of toasted Sullivan Street focaccia-style bianca buns topped with slaw, crisp fried onions, and a barbecue and garlic aioli. 1200 NW 22nd St., Miami
305-396-4551
hometownbbqmiami.com
Located in Miami's Allapattah neighborhood, Hometown Barbecue chef/owner Billy Durney will tell you: "Stay humble, stay focused, stay hungry." It's easy to check that last box when visiting the Miami outpost of his New York City eatery beloved for its Texas-style take on barbecue meats of all kinds. Durney's meats are pit-smoked over a live fire, making for some of the hottest barbecue in South Florida. At the Allapattah location, find everything from baby-back, spare, and beef ribs to brisket, turkey, and chicken — all served as a platter or sandwich alongside traditional sides. Like spicy? Grab a slice of the jalapeño-infused corn pudding and house-made cheddar jalapeño sausage. Don't miss highlights like the chef's jerk-encrusted bacon, sticky fried rib tips smothered in a Korean barbecue sauce, or (on weekends only) pastrami. 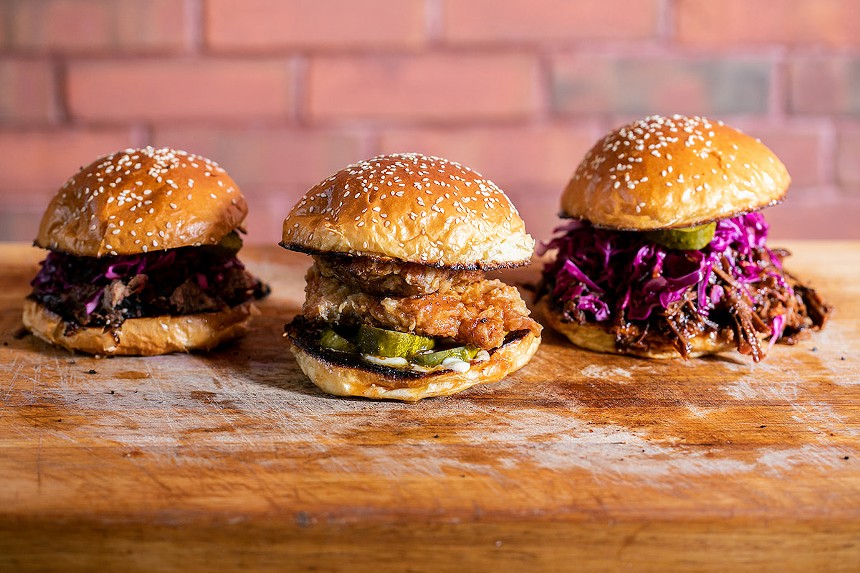 305-690-7103
3585 NE 207th St., Aventura
izzyssmokehouse.com
Izzy's Brooklyn Smokehouse chef/owner Sruli "Izzy" Eidelman recently opened his third location — and the first in Florida — in Aventura. In 2015, Eidelman opened a kosher barbecue restaurant in New York City, offering high-quality, slow-cooked meats (sans pork) to the city's meat-loving masses. Described as Texas-style with a Brooklyn-Jewish twist, the menu is 100 percent kosher, but any meat lover can appreciate Eidelman's star menu item, an 18-hour smoked brisket seasoned with salt, pepper, and a touch of paprika. Izzy's serves top-quality meats smoked on the premises in an all-wood smoker and finished on a live-fire wood-oven pit, with the finished product sold by the half-pound or as part of rice-based bowls, tacos, atop nachos, or part of super-sized sandwiches. The menu also includes beef ribs, turkey, and chicken — but, as you might expect — no pork. You won’t miss it with specialties like the house "dino" beef short ribs, a two-week brined and smoked pastrami, smoked lamb ribs, or the popular fried smoked chicken sandwich topped with the house hot sauce and a zippy horseradish mayo. 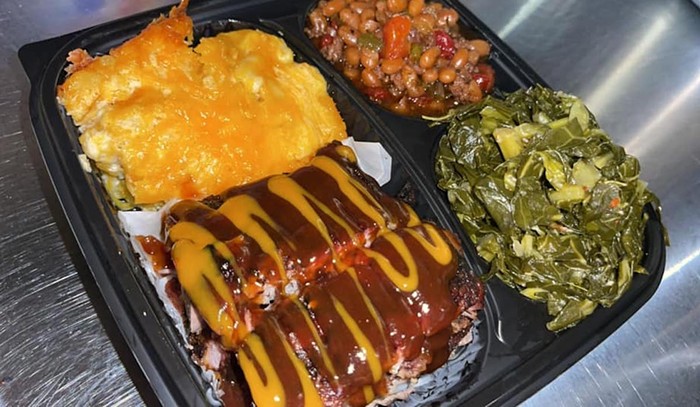 9302 NW 22nd Ave., Miami
305-693-3877
Facebook.com/Saint-City-BBQ
Make no mistake: This isn't a coffee shop. Sure, the sign at Saint City may read "coffee shop," but the grills behind the building say nothing but smoked meat. This is a barbecue joint through and through, housed inside the Saint City Church of God in Miami's West Little River neighborhood. For more than 40 years, the restaurant has been dishing up its take on Southern-style soul food via slabs of sauce-lacquered ribs and barbecue chicken. A rib sandwich is as simple as it gets: a short stack of ribs served with two slices of white bread. Sides include giant pots of vegetable-studded country-style baked beans, pigeon peas with rice, a mac and cheese baked under a thick layer of melty cheese, and tender stewed collard greens. 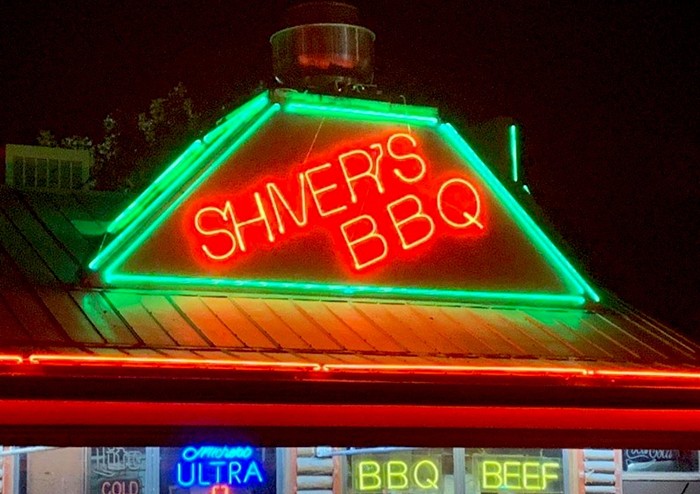 28001 S. Dixie Hwy., Homestead
305-248-2272
shiversbbq.com
Before they're served, Shiver's baby-back ribs spend 12 hours in a sauna of hickory smoke. A half-slab of the ribs come with a side of "Squealing Pig Skins" — potato skins stuffed with a mound of pulled pork, jalapeño peppers, and a mix of jack and cheddar cheeses. But that's not all you can get at one of the oldest barbecue joints in Miami, a place that dates back to the 1950s, making it even older than Shorty's in Kendall (see below). As the story goes, Shorty Allen and Shiver's were business partners who went on to open separate restaurants — but Shiver's opened a year earlier. No matter who owns the title of Oldest Barbecue Joint in the Magic City, one fact remains: Shiver's barbecue is as good as barbecue gets. Here you'll find it all, from smoked chicken and spare, baby-back, and beef ribs to brisket, burnt ends, and pulled pork. More than a dozen sides include the usuals along with a hash-brown casserole, jalapeño cheese grits, and fried green tomatoes. Don't miss the weekly "off menu" special, which might be brisket burgers and "rodeo" nachos or beef chili and Brunswick stew. 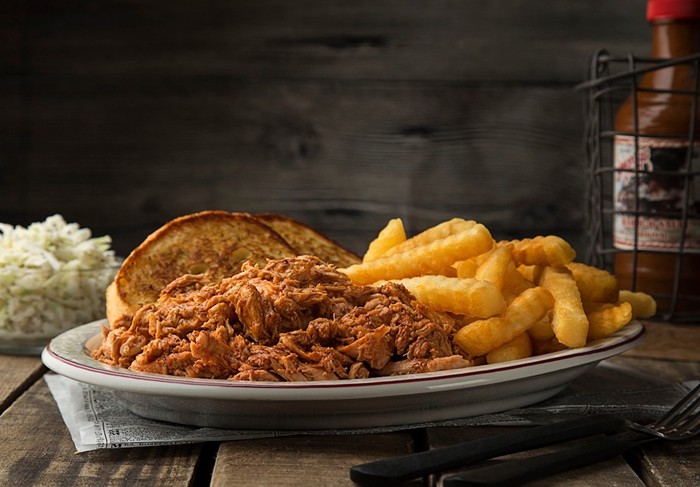 9200 S. Dixie Hwy., Miami (and other locations)
305-670-7732
shortys.com/south-miami
Shorty's claim to fame: 70 years of barbecue "perfection." The truth is — even after all these years and four locations strong — Shorty's BBQ remains one of Miami's favorite spots to snag finger-lickin' barbecue. Since 1951, not even a fire, Hurricane Andrew, or a recession could keep the original location from serving its famous butter-drenched corn on the cob, pulled pork, ribs, and house-made sweet tea. Whether you're in Davie or Miami, you get the area's best barbecue values, including under-$10 spare rib or quarter-chicken weekday meal specials, Texas-smoked beef brisket, and massive hickory-smoked pulled-pork plates drenched in barbecue sauce and served with coleslaw, fries, and garlic bread. 3401 N. Miami Ave., Miami
305-576-8096
societybbqmiami.com
At one time, Society BBQ chef/owner Richard Hales was best known for his take on Asian cuisine — but not anymore. These days, it's his Texas-style barbecue that creates the buzz. The full-service restaurant located in the Shops of Midtown Miami offers a selection of slow-cooked meats smoked over a combination of Florida oak and hickory. The menu includes the usual suspects — from beef ribs and brisket to pulled pork, chicken, and vegan Beyond Meat or traditional brisket burnt ends, even a Wagyu, jalapeño, and cheddar beef sausage. Much of it is offered by the half-pound with a side of pickled onion and dill pickles, along with a choice of made-from-scratch sides like smoked cornbread, pit-smoked beans, a wedge salad, a smoked loaded baked potato, and mac and cheese (a squash-based version is also available). Guests can opt for any meat to be sandwiched into a buttered bun with Chifles plantain sticks, coleslaw, and barbecue sauce. For a sweet ending, desserts are created by Hales' wife, Jenny — AKA “Wife Hales" — including her killer bourbon-soaked bread pudding.
KEEP MIAMI NEW TIMES FREE... Since we started Miami New Times, it has been defined as the free, independent voice of Miami, and we'd like to keep it that way. With local media under siege, it's more important than ever for us to rally support behind funding our local journalism. You can help by participating in our "I Support" program, allowing us to keep offering readers access to our incisive coverage of local news, food and culture with no paywalls.
Make a one-time donation today for as little as $1.