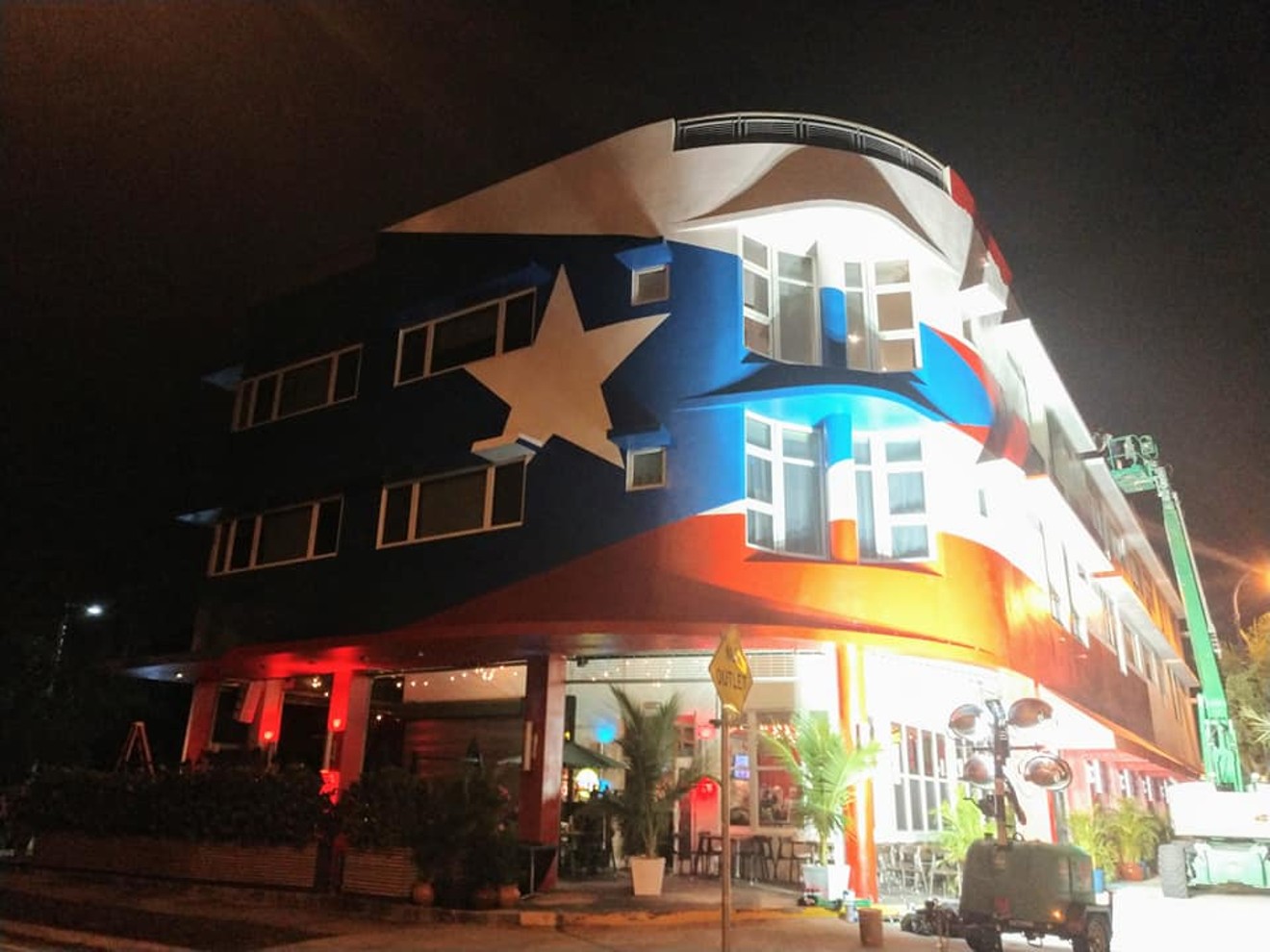 La Placita's mural has caused controversy before the restaurant has even opened. Photo by Natascha Otero Santiago
When chef Jose Mendin and TV personality Julian Gil decided to open La Placita, they wanted to celebrate the culture of Puerto Rico through food, music, and art.

The restaurant's partners commissioned artist Hector Collazo Hernandez to paint a rendition of the Puerto Rican flag on the building's façade. The three-story mural was painted in one day, with the restaurant partners obtaining an event permit to turn the live-painting into a block party. The community was invited to take part in the making of the mural, titled Plantando Bandera, and Miami Mayor Francis Suarez showed up to help celebrate.

But now the mural is in jeopardy due to a code snafu, and more than 70,000 people, through a Change.org petition, are telling the City of Miami to keep the flag.

The issue began last Thursday, when the restaurant, still not open to the public, was visited by code-enforcement officers, according to Joey Cancel, the restaurant's CEO. "I showed them our permit and asked them to cite what article we're violating. The officers were unable to provide me with the information."

The mural was finished, and although the owners say they have not received any written notice of violation or have been issued fines, there's been much speculation regarding the fate of the artwork. The Miami Herald reported the mural was a code-compliance issue, according to Vickie Toranazo, a historic preservation planner for the City of Miami.

Cancel, however, says he did everything the city asked of him to obtain the required permits for the project. "We went through a very thorough process," he says. "First, we made an assessment of the building and noticed the building itself is not considered historic. The original building was demolished."

He then hired a permitting expeditor, who printed all the records of the building's history and gathered the permits to make the business operational. The restaurant partners then hired a painting contractor, who pulled the required permits for the mural. "The city told us that we needed a special events permit," Cancel says, "so our contractors moved the paperwork to that division." From obtaining the required insurance to hiring off-duty police officers, Cancel and his team tried to be thorough in their compliance with the City of Miami. "We did everything," he says. "We were really specific when it came to the description of the project, that we were going to paint an artistic mural."

La Placita partner Julian Gil posted the special events permit on his Facebook page, which clearly states the applicants are authorized to paint an artistic mural at the location. The problem lies in the fact that the project first needed approval by the Historical and Environmental Preservation Board, and the city pushed the permit through without that step. Says Cancel: "My understanding is that someone dropped the ball."

The restaurant CEO says that in no way did he and his partners intentionally try to skirt any additional approval process and that they will do whatever it takes to make the situation right. "We are willing to comply, and we are willing to start whatever process we need to make this right. It's clearly not our intention to violate any type of code."

Facebook screensho
Cancel says the mural, which is meant to be a symbol of friendship and harmony, has prompted a few surprisingly negative reactions from some neighbors. He cites one local, Caroline DeFreze, who posted a comment on Facebook stating, "Bring back the prostitutes and crack heads."

DeFreze's Facebook page has since been deactivated or made private. A LinkedIn account lists a person by that name as working in the Miami Beach city manager's office, although the office confirmed no one by that name currently works there.

Feedback about the flag, however, has been mostly positive. One supporter is Vagabond owner and MiMo District developer Avra Jain, who calls the mural a work of art. "It has brought a lot of attention to Biscayne Boulevard, which is a good thing," she says. "It is my understanding that they didn't get the necessary approvals, but hopefully it can be remedied."
KEEP MIAMI NEW TIMES FREE... Since we started Miami New Times, it has been defined as the free, independent voice of Miami, and we'd like to keep it that way. With local media under siege, it's more important than ever for us to rally support behind funding our local journalism. You can help by participating in our "I Support" program, allowing us to keep offering readers access to our incisive coverage of local news, food and culture with no paywalls.
Make a one-time donation today for as little as $1.