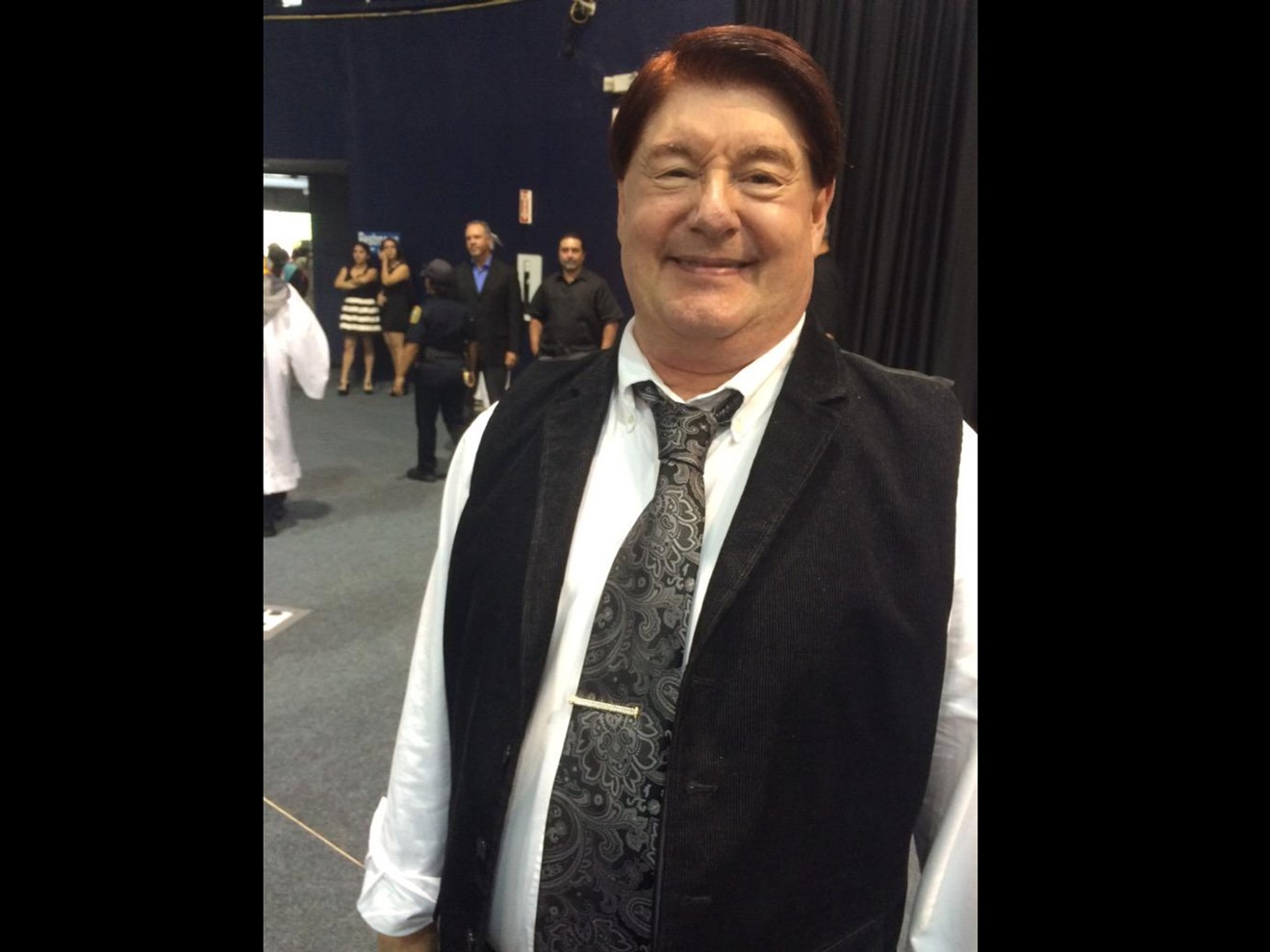 "I was in jury duty once, and the judge stopped everything and asked, 'Do you know John Branstetter?'" says Humberto Ferre, the school's library assistant and webmaster. "And he tells us a story."

Branstetter died of cancer on January 25. Former students and colleagues say he embodied school spirit, took pride in his pupils' successes, made Shakespeare fun, and rained encouragement, empathy, and confidence on his students when they needed it. The school's colors are orange, brown, and white. Its mascot is the cobra. Branstetter, it seems, was its heart.

"I've been here 27 years, and the one thing I can tell you is when I tell someone that I work at South Miami Senior High, they'll always ask, 'Is Branstetter still there?'" says Danny Lavandeira, the school's activities director. "Everybody said he was the best and the greatest. He is South Miami Senior High."

Branstetter's legacy lives on in the school's Wall of Fame, which he and Ferre filled with photos to honor students who made it big, and in the Little Theater, which bears his name.

A street near the school will soon be named after him, too.

"We want to honor him and the tremendous work that he did for South Miami Senior and the Cobras," Regalado said during the commission meeting.
South Miami opened to students in 1971, and Branstetter began teaching there in 1972. According to an obituary, he was also a part-time adjunct professor at the University of Miami and hosted "Dial-A-Teacher," a PBS program that provided homework help to tens of thousands of students.

Branstetter spent most of his 43-year career teaching language arts. A 1980 article in the school's newspaper, the Serpent's Tale, says Branstetter was one of three educators who taught English to 43 immigrant students from Cuba at the time. He told the student newspaper that he had to get creative to teach the students English and sometimes spoke Spanish to make things easier for them.

"They are frustrated because they don't understand, they're too shy to speak, and there is prejudice against them," Branstetter told the newspaper. He said Cuban-American students raised in Miami would make fun of those who recently arrived from the island.

"One thing I cannot understand is why Cuban-American kids make fun of these students," Branstetter said at the time. "Many of them [the Cuban-Americans] are also refugees. To me, there is no difference between the two groups."

Branstetter left an impact on many of his students, including Mary Galeri, a South Miami student-turned-social studies teacher and department head at the school.

"When I was a student, Mr. Branstetter was a young teacher," she tells New Times. "I remember having a class next to him and how animated he was. I teach regular, honors, and [advanced placement], and I always admired his ability to deal with all types of students, including some who didn't want to be in school. He would bring things like Shakespeare to life for them rather than teach in a more traditional approach. I think that's why it doesn't really matter who they are, people will always ask, 'Is Mr. Branstetter still there?'"

A boisterous and theatrical character who made students light up at the sight of him, becoming South Miami's drama teacher in his later years suited Branstetter. A former student says Branstetter reminded her of the actor Nathan Lane. He retired in 2015 but continued to volunteer at the school, particularly to work with Ferre on upgrading the Wall of Fame.

Branstetter was among the first to welcome the school's new principal, Cadian Collman-Perez, when she started last year.

"He showed up, brought me a Cobra figurine, and welcomed me to the family," she says. "He took the time to talk to me about the school and express how happy he was that I was there. Through his actions, he taught me the importance of finding the time to make others feel important and special regardless of who they are."

Branstetter regularly lent students a sympathetic ear and left them with a smile whenever he talked to them. Samantha Ensenat, a former student who graduated from South Miami in 2010, says Branstetter offered her genuine advice when she went through a difficult breakup during her senior year.

"It took me a long time to bounce back, and he was always there to talk," Ensenat says. "He was like, 'It's gonna get better. This is only right now.' I remember he took care of his brother who had a terminal illness. He was taking care of him for a long time. And [his brother] passed away while we were still in school, and you would never know it. I don't know his whole story. You would think nothing ever happened to him that was that bad. He was just that sparkly. If he could get through all the things he had to deal with, I could get through it, too."

Occasionally, Branstetter wrote letters to the editor that were published in the Miami Herald. In one, he complimented South Miami's teachers, students, security staff, administrators, and the staff who keep the halls clean. In another, he defended public schools in response to a letter writer who'd called the school system a failure.

"It's time for us to celebrate the successes of the Miami-Dade Public Schools, and to encourage our legislators to fairly fund them," Branstetter wrote.

By January, Branstetter was in hospice care and had to be looked after by his cousin. When school staff learned his illness was terminal and he didn't have much time left, they organized a drive-by celebration in his honor on January 10. The school's marching band set the beat. About 100 staff members and former students met at South Miami and decorated their cars, honked their horns, and shouted "I love you." Branstetter lived near the school and walked all 250 steps to get there. Sitting in a wheelchair and receiving supplemental oxygen, he waved at the passersby and cried.

"I was glad to be there and see him," Ensenat says. "It was very emotional."

Branstetter's colleagues remember him as a reliable workmate whose pride in the school and students was palpable. Laura Tomkins, who chairs the school's testing programs, says Branstetter was often willing to do things others wouldn't.

"Like on a Saturday morning, when we'd come home from Grad Bash, he would be there fully dressed to greet the kids," she says. "The chaperones would come off the bus and we were exhausted and all wanted to go home. He would wait until each kid got off the bus. That's just something Mr. Branstetter would do. It wasn't a burden for him. He never made us feel like South Miami was work. This was his family, we loved him very much, and he is very much missed."
KEEP MIAMI NEW TIMES FREE... Since we started Miami New Times, it has been defined as the free, independent voice of Miami, and we'd like to keep it that way. With local media under siege, it's more important than ever for us to rally support behind funding our local journalism. You can help by participating in our "I Support" program, allowing us to keep offering readers access to our incisive coverage of local news, food and culture with no paywalls.
Make a one-time donation today for as little as $1.