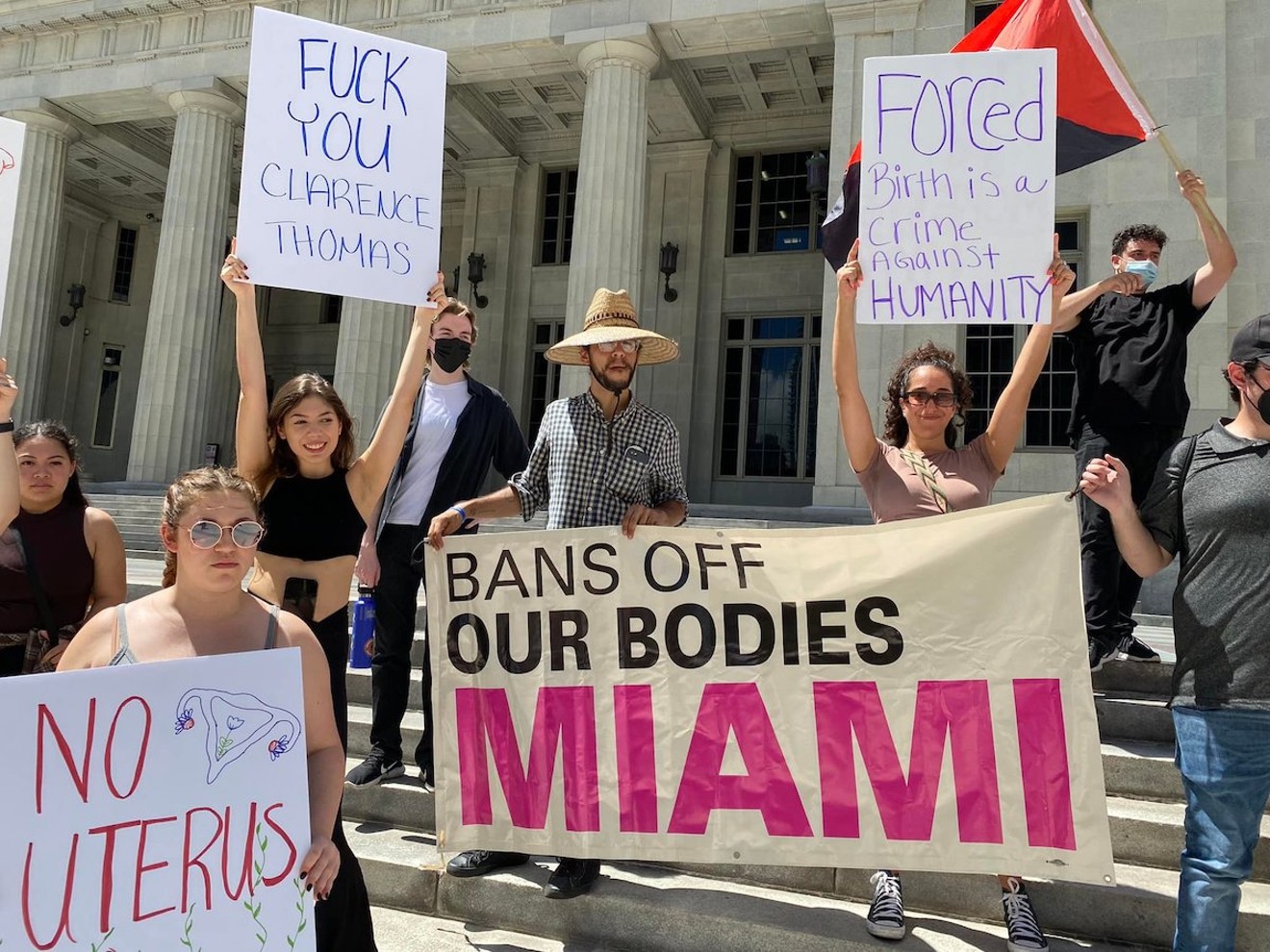 A Bans Off Our Bodies rally outside the Miami-Dade County Courthouse on July 1 Photo by Kat Duesterhaus/Courtesy of Bans Off Our Bodies
After the U.S. Supreme Court overturned Roe v. Wade, the landmark case that legalized abortion nationwide, many Americans voiced concerns and vowed to continue to aid women who seek abortions.

The right to an abortion has been protected by some states and banned via "trigger laws" in others. Florida stands somewhere in between, at least for the time being: Gov. Ron DeSantis signed a 15-week abortion ban in April. A Leon County circuit court judge recently blocked the law temporarily, though it remains on the books.

In the meantime and in the long term, how will local abortion-rights organizations step up to help women who need it?

Laurie Scop, chair of the Miami chapter of the National Organization for Women (NOW), says the organization can get those seeking an abortion in direct communication with a clinic.

"We're referring to Planned Parenthood and giving out all kinds of information pertaining to reproductive rights and reproductive justice," Scop says.

"Sometimes it's more than 24 hours, Canino cautions. "We don't have providers all the time and every day at the centers because a lot of the work we do is also preventative care, so it depends what centers are operating abortions that day."

Patients can schedule appointments at their local Planned Parenthood to receive contraceptives in the form of the pill and the shot. Canino advises abortion seekers to book a consultation, even if they think it's too late. (To find a clinic, visit plannedparenthood.org or abortionfinder.org.)

Canino notes that because insurance doesn't cover abortions in Florida, donations to organizations like the Women's Emergency Network are a priority.

"When someone comes to our center, and they say, 'We need access to abortion but can't pay for it,' that's when we reach out to the abortion fund," she explains.

A Bans Off Our Bodies rally in Wynwood on June 24
Photo by Natalie Rey/Courtesy of Bans Off Our Bodies
Thanks to the fund, Canino says, Planned Parenthood hasn't had to turn anyone away in Miami. It's harder to find funding for birth control pills since Title X, which provides government funding for reproductive health services to uninsured people with low incomes, was revoked in Florida for contraceptives. This has led clinics to look for grants to lessen the burden on patients. If that runs out, there are no alternatives.

"We've been lucky enough with the abortion funds that they have been able to raise the money so we can provide the care to our patients because there's nothing we can get from insurance providers," she says.

"I'll probably never forget this day for the rest of my life because my phone was just ringing and the texts and the chats and there was just a lot of movement and noise and activity and things going on," chapter chair Laurie Scop says.

The shock of the announcement translated into a surge of new members for Miami NOW, as it has for other organizations such as the Southern Birth Justice Network, an organization of doulas who assist with abortions. Scop attributes this fact to what's being referred to as the "summer of rage."

"People want to find a way to plug in. They want a place to put their emotions," she says.

Behind the scenes, Planned Parenthood was ready for the day. It had prepared its staff for callers who wouldn't know they could still have an abortion, for people who'd already scheduled appointments, and for how to accommodate people past the 15-week mark.

"It was hard, because you know the face. When [lawmakers] legislate and make decisions, it's very easy because they don't see the face," Canino says. 'We are still processing [that day], and many of us have not processed it yet."

Bans Off Our Bodies' next rally will take place at Bayfront Park on July 16.
Photo by Natalie Rey/Courtesy of Bans Off Our Bodies
The Planned Parenthood PAC has adopted a "laser focus" on its political goals, the first of which is to flip the Florida State Senate in November.

Currently, Democrats hold 16 seats, while Republicans have 26 seats. The PAC aims to canvass and educate voters in order to remedy the Dems' disadvantage. The central demographic: marginalized communities that would be the most deeply affected by the lack of abortion resources but might not consider it a priority voting issue, for religious reasons.

"[DeSantis] has already said — and many of these members of the conservative legislature have already said — that once the election comes, they are going to go back and try to do 12 weeks or ten weeks," says Canino. "They're going to see what sticks."

In a statement posted on Twitter on June 24, DeSantis vowed to "expand pro-life protections" in the state.

This will affect Floridians, but also people who travel to Florida for abortion access. Florida offers the most access to abortion of any state south of Virginia and more than any state along the Gulf of Mexico.

Miamians have many ways to contribute toward abortion resources. Scop suggests attending Bans Off Our Bodies events, including an upcoming one at Bayfront Park on July 16, or donating to the Women's Emergency Network or the NOW PAC.

Canino recommends having conversations surrounding abortions, discussing the issue openly, and knowing where local and state politicians stand on the matter.

"We have hope, and hope is real, but it needs to be hope with action," Scop sums up.
KEEP MIAMI NEW TIMES FREE... Since we started Miami New Times, it has been defined as the free, independent voice of Miami, and we'd like to keep it that way. With local media under siege, it's more important than ever for us to rally support behind funding our local journalism. You can help by participating in our "I Support" program, allowing us to keep offering readers access to our incisive coverage of local news, food and culture with no paywalls.
Make a one-time donation today for as little as $1.