Those stories were read by thousands of new and longtime readers of Miami New Times, demonstrating the value of local journalism even in a year of belt-tightening. We're grateful to all of you out there for your support and hope you continue to come to us for fun, interesting, or informative things to read.

Here are some short excerpts from our ten most-read longform stories of the year. 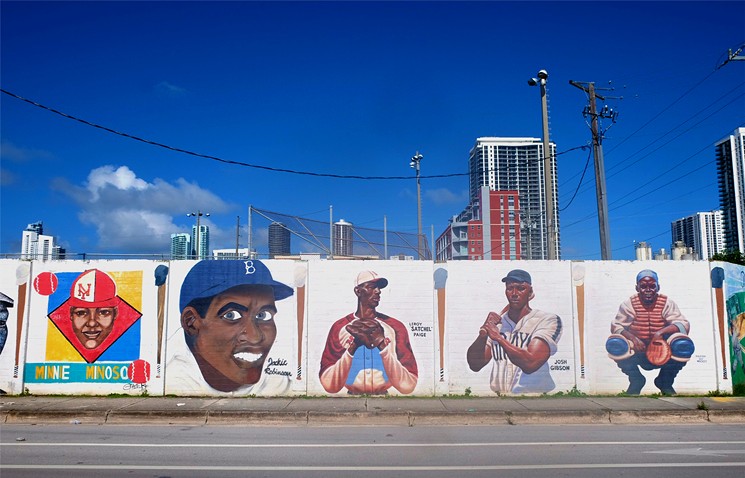 
South Florida was a hub of Black baseball. Players came down seasonally, working in hotels as bellmen and busboys, and sometimes even playing in the Florida Hotel League on teams sponsored by the very hotels they worked at. One of the great players in baseball history, Oscar Charleston, played for both the Royal Poinciana Hotel and the Breakers Hotel teams in Palm Beach. In his book I Was Right on Time, John James "Buck" O'Neil wrote about playing in front of fans at Dorsey Park for our local team: the Miami Giants.

O'Neil wrote about how the team was "owned by two bootleggers" and how "you couldn't afford to be too picky about whom you played for, because a lot of clubs were owned by men who ran numbers rackets and booze." It was Miami, after all.

Without the ability to meet clients in person, South Florida sex workers are struggling financially.
Photo by Cambodia, P.I. Network/Flickr
9. Florida Sex Workers Are Going Broke Because of Coronavirus, by Alexi C. Cardona.


Vikki doesn't offer sex or sexual contact. She says most people she sees are looking for intimacy. She'll set boundaries, cuddle, and work through whatever discomfort they might have with physical closeness.

Before Miami-Dade became a hot spot for COVID-19, she met a client looking for a "sexy experience." She told him he couldn't have her like that, but she had some other ideas.

"Our entire session was me pulling tarot for him and him crying," she says. "I held him, he held me, and we cried. He needed someone to feel safe with."

What people tend to misunderstand about this kind of work, Vikki and Black say, is that many people seek the experience just outside of sex — the safety, connection, and openness they haven't found in themselves or in their partnerships. And, sometimes, sex workers provide an avenue for people to explore their desires without shame or judgment of their bodies and sexual identities.


Miami police detective Luis Valdes thought it was a test when his sergeant told him to plant cocaine on a suspect on January 27, 2010.

It was Sgt. Raul Iglesias' first day on the police department's so-called Crime Suppression Unit, and Valdes was certain his new boss was just testing his mettle.

"We don't do that here," Valdes told Iglesias. "Nobody on this team does it."

The suspect didn't have drugs on him, and Valdes says he was ready to let him go. But Iglesias had other ideas. He called a friend, an officer from another unit. The two shook hands, and then Iglesias produced a bag of powdered cocaine that he said he found in the suspect's back pocket. The man was arrested.

Little did Valdes know that interaction would color the next ten years of his life. He would cooperate in an FBI investigation against Iglesias, leading to the sergeant's arrest in 2012 on charges of violating suspects' civil rights, possessing drugs, and obstructing justice.

Gami of Internet Friends (right) with her crew, Keanu Orange and Marceline Steel.
Photo by Michele Eve Sandberg
7. As the Economy Sinks Ever Lower, Miami's Nightlife Industry Has Been Left to Fend for Itself, by Kat Bein.


The measure of Miami's nightlife industry is an economic one, but it's an economy that's made up of and played out by human beings, and that only elevates the stakes.

"My raves are important, but the health and safety of my peers and my family is very important too," Gami says.

In the months since canceling Fifth Layer, she and Internet Friends have remained active with livestream events, including a recent Pride-themed stream for HBO. It helps keep their DJs busy and puts a little money into their pockets, but Gami doesn't see virtual events as a long-term solution.

"I think it's very hype, like new puppy energy," she says. "It's exciting, and you learn what you have to learn from it. Then you're like, 'OK, this is not the same.' DJ-ing live to an audience that really appreciates you, that energy is unlike any other. I definitely miss conjuring these experiences, these raves, and my sets." 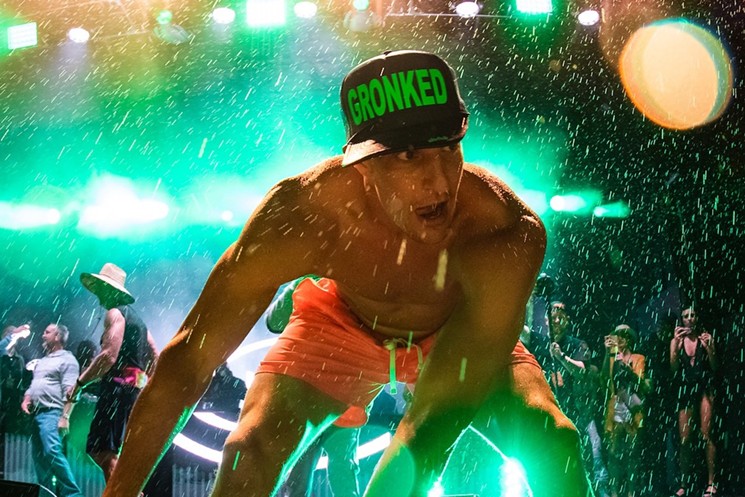 A scene at Gronk Beach
Photo courtesy of Alive
6. Revelations From the Church of Gronk Beach, by Nathaniel Sandler.


The event line was curling around the Bandshell. Gronkites were shrouded in the uneasy anticipation of the party. One man feebly tried to get a "Gronk! Gronk! Gronk!" chant going, but to no avail. The attendees were a surprising mix of old and young (all 21 or over), with a small percentage dressed how we all imagine festival-goers: clad in neon apparel, fishnets, and not much else.

The crowd could almost be described as eclectic if it weren't made up entirely of white people.

Standing next to the line was a man on a soapbox yelling into some sort of contraption about how "Tom Brady won all those Super Bowls because of witchcraft." As an early and ardent adopter of the theory that Tom Brady did 9/11, I found myself happily in agreement with this insane street preacher. When I got a closer look at the guy on the megaphone, I saw he was holding a sign in scribbled caps that read, "ASK ME WHY YOU DESERVE HELL."

I didn't need to ask. I knew why. I was at Gronk Beach.

A protester holds up a sign showing Latino solidarity with BLM.
Photo by Mike Von/Unsplash
5. Miami's Hispanic Community Has a Blind Spot in Recognizing Racism and Colorism, by Aaliyah Pasols.


Singer and reality TV star Amara La Negra appeared on the iconic variety show Sábado Gigante for six years during her childhood, only to feel excluded and awkward as the only Afro-Latina on the show. In a 2018 interview with National Public Radio, she described how producers would place in the back of the cast or bury her in the middle, leaving her feeling "like a bug in the middle of a cup of milk." This type of treatment can also be seen in telenovelas, where casts are mainly white Hispanic, only employing Afro-Latinos as side characters.

Despite instances like these, non-Black Latinos continue to believe that as a minority themselves, they're incapable of racism. Arlene Davila, professor of anthropology, social and cultural analysis at New York University, expressed more or less the same sentiment to NPR, explaining that these Latinos will argue that "you can't apply the same standards of racism because 'we have our humor and we are not racists, because we are Latinos, and we can get away with that without getting regulated.'"


Overtown is at the precipice of dramatic change. Development from recent booms in downtown to the south and Wynwood to the north is slowly creeping into the area. Late last year, developer Michael Simkins, son of business magnate Leon Simkins, won approval to purchase 14 parcels in the heart of the neighborhood to create the Overtown Culture & Entertainment District, a cluster of art and performance spaces dotted with small parks. Around the same time, according to county property records, Sarkis Izmirlian paid $6.6 million for a shuttered convenience store on Overtown's northern boundary. The billionaire hotelier has yet to divulge his plans for the property.

But no project has garnered more attention than Samuelsson's.

Many thought Elián's rescue was a miracle. But the boy would become a nightmare for others.
Photo-illustration by Tom Carlson (source photo: Jorge Rey/Hulton Archive)
3. The Myth of Elián, the Boy Who Was Plucked From the Sea, by Vanessa Garcia.


I write from Miami today, in quarantine, hostage to the pandemic of COVID-19, thinking about the boy and about the long arms of that moment in history.

Twenty years on, with a PhD in hand and a lifetime of Cuba inside, I believe the answer can be found by laying out alongside the Elián story the history that was never laid out as context for the Elián story.

The great gulf between the perspectives of Cuban-Americans and Americans 20 years ago consisted of what the former knew well and the latter knew hardly at all: life on the island from which Elián had washed ashore. The broader American lens did not widen enough to truly take in the Cuban-American view, undervaluing the weight of lived yet unwritten history it carried — because if there is one thing communism knows how to do well, it's how to rewrite, erase, and appropriate history. Che Guevara himself said, "Ni un paso atrás, ni para coger impulso": Not one step back, not even to gain momentum. But what is history for if not to look back upon and learn from?

Some fetishists enjoy a vanilla sex life, and feet are like the hot fudge on top. For others, their foot fetish is the most vanilla thing about them.
Photo by Karli Evans
1. Miami's Fetish Community Falls Head Over Heels for Feet, by Alexi C. Cardona.


Omar's fascination with women's feet is reflected in some of his earliest childhood memories. As young as age 4, he remembers his mom's friends propping their bare feet on the table when they would come over to his house. Omar liked to stare at their soles and rub his face on them. He'd sometimes grab their feet, pull them underneath his shirt, and rub them on his belly.

"My mom would spank me for doing that," he says.

That love is what drove him to the dimly lit, smoke-hazed club in a strip mall on a recent night in January. Miami Footnight, a monthly foot fetish party in South Florida, brings together models with beautiful feet and men who pay as much as several hundred dollars to lavish all kinds of attention on them.