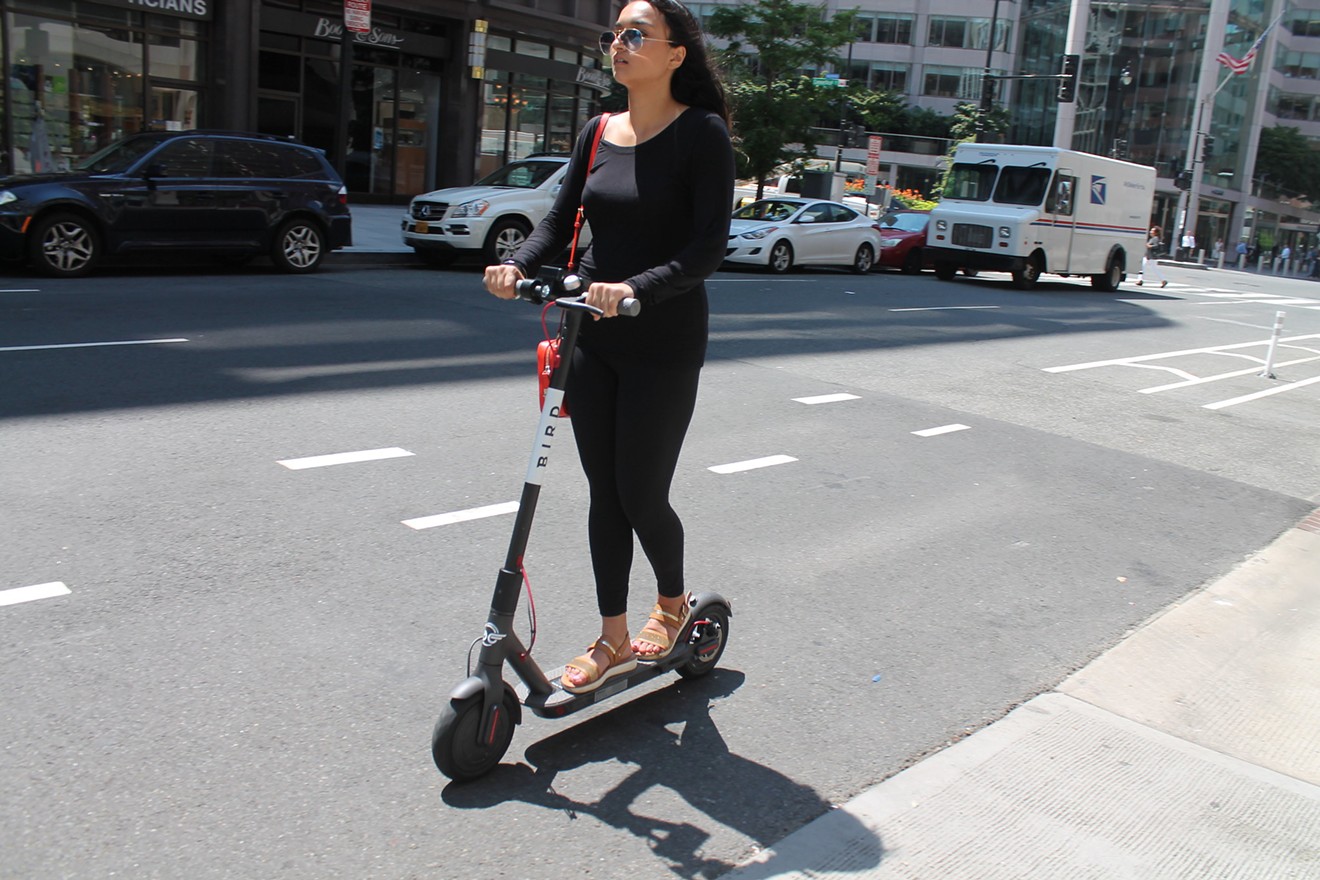 The city is rolling out a phone system where residents can easily report underage and reckless riders. Photo by Elvert Barnes / Flickr
With the end of Miami's scooter pilot program looming — and personal-injury attorneys hovering like hawks over the industry — scooter companies are vying to show the Miami City Commission they can offer more than just lip service for rider safety.

Commissioner Ken Russell says there's a "free market culling" afoot, meaning at least four of the nine scooter rental companies participating in Miami's pilot program could get the boot. Those that stay will have to show a plan to reduce accidents and minimize sidewalk scooter clutter, he says. Companies that give riders discounts for wearing helmets will be scored higher, as will those that keep their fleets well maintained.

"They will be competing heavily against each other to have the best product, best app, best safety incentives," he says.

Russell's district, which includes downtown Miami, Coconut Grove, and Edgewater, has been ground zero for the pilot program — the only area in Miami the scooter companies are allowed to operate. The latest tally shows roughly 4,000 scooters are in service.

As electric scooters have risen in popularity in recent years, however, so has the number of injuries. The Associated Press reported earlier this month that e-scooter injuries increased nearly threefold across the nation from 2014 to 2018. During that period, almost 40,000 people were treated in emergency rooms for related falls and crashes.

Though dozens of rental scooter accidents have happened in Miami, none of them has been fatal, according to Russell.

Fort Lauderdale was the site of the first publicly documented deadly rental-scooter accident in the Sunshine State. Mathias Huff, age 27, was fatally struck by a vehicle while riding a Lime scooter in April 2019.

Scooter injury statistics obtained by New Times suggest accidents in Fort Lauderdale have been on the decline since Mathias' death. According to stats provided by Fort Lauderdale Fire Rescue, 23 documented scooter accidents occurred between September 2019 and December 2019, compared with 45 in the four months prior.

In a string of Broward personal injury claims filed against Lime, Bolt, and Bird, attorneys from the firm Saban + Solomon blasted the companies for not providing helmets with scooter rentals. Court records show those companies were sued at least nine times in Broward Circuit Court over scooter injuries.

Among the cases was a lawsuit filed by the mother of Ashanti Jordan. Riding a Lime scooter on her way home from a shift as a security guard at a local hospital in February 2019, Jordan was struck by a vehicle at a Fort Lauderdale intersection. Jordan, age 27 at the time, suffered a disabling brain injury and was left in a vegetative state. The driver of the vehicle that hit Jordan is also named as a defendant.

One lawsuit filed last month in Miami-Dade Circuit Court alleges the brakes failed on Carla Casola's Lime rental scooter as she approached Brickell Avenue. She claims she had to use her foot to stop the scooter at a red light and then fell off, hitting her head on the concrete. What's more, her scooter app before the accident had given her a "maintenance required" notice, but a Lime employee simply overrode it and told her the scooter was safe, she claims.

Lime tells New Times "the safety of our riders and community is our number one priority." The company says it has conducted helmet giveaways and hosted classes to educate riders and promote scooter safety across Fort Lauderdale and Miami. Nationwide, the company has given away 250,000 helmets, it says.

"We’re continually working with local leaders to support infrastructure and create regulations that enable us to best serve area residents and visitors," a company spokesperson says.

Miami charged a $50,000 upfront licensing fee to each scooter rental company participating in the pilot program, and the city collects a $1 fee per scooter per day. It also imposes a $25 fine each time a city employee has to move a scooter left in the middle of the road or outside the designated area.

Miami's scooter ordinance dictates that all of the scooter program funds must be used for new bike lane construction and program administration. Municipal revenue from the pilot program has already funded the creation of a new bike lane along Bird Avenue. Plans for similar bike paths are in place for Mary Brickell Village and downtown.

According to Russell, the city just rounded the $1 million mark in revenue from the program. He admits the city's bike lane infrastructure is outdated and disjointed owing to a lack of connecting routes.

"We're gonna need this. A million dollars can be eaten up quickly when you're trying to fortify bike lanes and choose the geometry of streets," he says. "We'll be seeking to leverage this money with other entities like the county and the state, which have bike-lane and pedestrian-safety funds available."

In the meantime, the city is rolling out a phone system residents can use to report underage and reckless riders by snapping a photo of a scooter's serial number.

The city commission has continued the pilot program, which launched as a six-month initiative in April 2019, through short-term extensions. Russell hopes to obtain approval from the city commission for a formal bidding process that will accept three or four companies for a long-term license.

"The request for bids is where the rubber meets the road on the changes... with regard to safety and sidewalk clutter," he says. "We're gonna use a scoring system that boosts one company over the other if it has a better program to enforce underage riding, reckless riding, reporting, and education."

Russell says he wants to ensure the program continues until bids are accepted and companies receive clearance to operate in his district long-term.

"People are using this as a regular form of transportation. I'm trying to avoid a lapse in service," he says.

It's still possible, however, that his fellow commission members could disagree with him and either terminate the pilot program or refuse to issue the bid request. As of now, the pilot program will run until at least mid-February.
KEEP MIAMI NEW TIMES FREE... Since we started Miami New Times, it has been defined as the free, independent voice of Miami, and we'd like to keep it that way. With local media under siege, it's more important than ever for us to rally support behind funding our local journalism. You can help by participating in our "I Support" program, allowing us to keep offering readers access to our incisive coverage of local news, food and culture with no paywalls.
Make a one-time donation today for as little as $1.
Izzy Kapnick is a freelance writer for Miami New Times, covering environmental law, white-collar crime, and the healthcare industry. He has worked as a legal news reporter in South Florida since 2008.
Contact: Izzy Kapnick