Miami Beach Commissioners Are Still Plotting to Tear Down the Fillmore 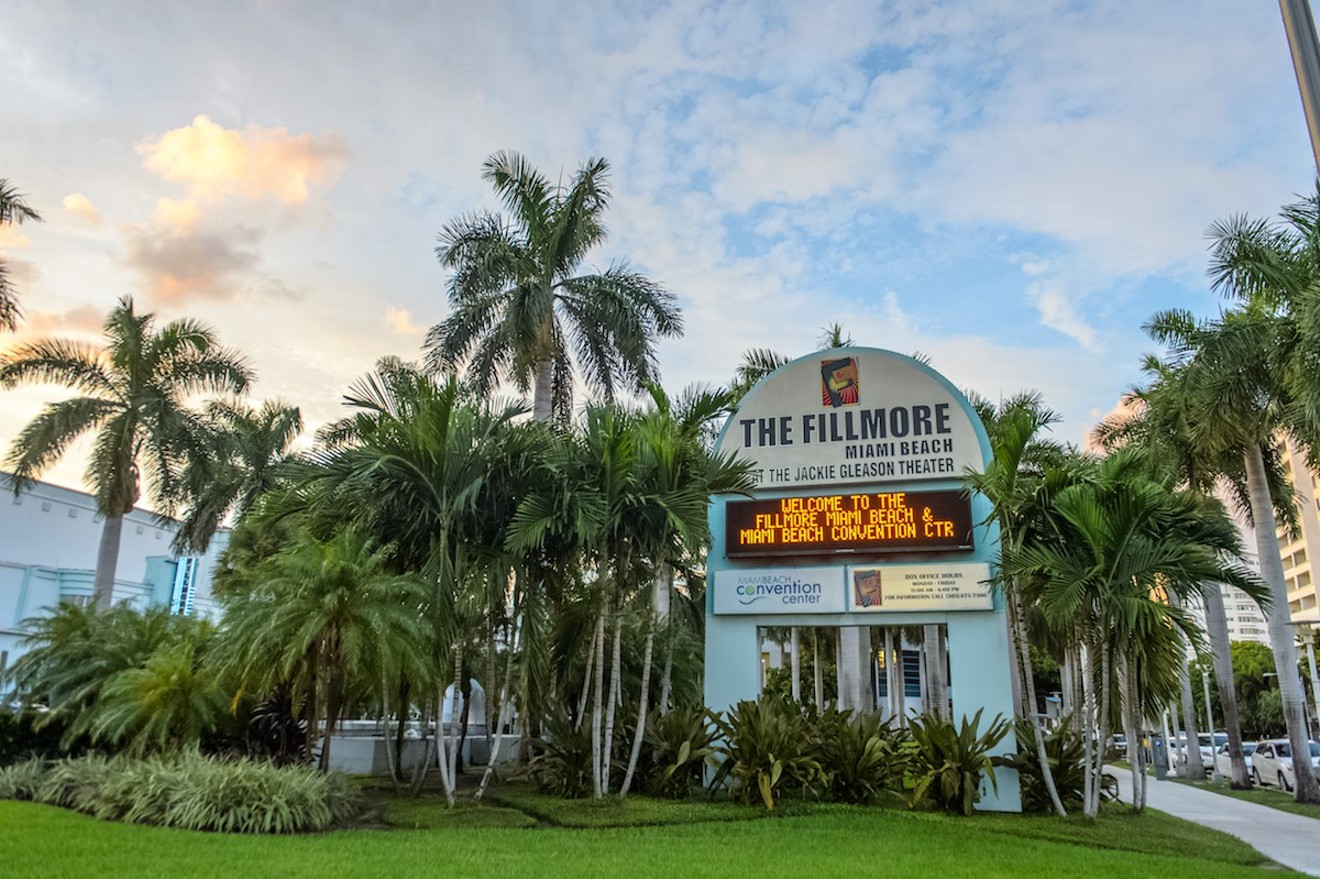 Photo by Jason Koerner
Even with its art deco façade and Miami Vice color palette, the Fillmore at the Jackie Gleason Theater is such a South Beach staple that it can be easy to ignore. However, ongoing renovation at the city-owned convention center complex, which houses the Fillmore, could mean the famous venue's days are numbered.

Since 2010, plans to replace the Fillmore — one of the busiest midsize theaters in the Southeast — with a hotel have been floated in an attempt to boost the convention center's crowds. However, the city has had trouble in recent years persuading 60 percent of voters to go along with this scheme. After all, the Gleason Theater is where Frank Sinatra, Mickey Rooney, and Eartha Kitt, along with other greats, made appearances before starry-eyed crowds. The Fillmore is so iconic it has become a self-evident cultural landmark. So it's unsurprising that voters have twice rejected the demolition plan.

Nevertheless, after a yearlong deliberation, the seven-member Blue Ribbon Committee — formed by Mayor Philip Levine to assess whether the city should build the hotel — reached a consensus June 1 that the city of Miami Beach would, in fact, greatly benefit from a convention center hotel on the Fillmore site.

That committee's recommendation will be sent to city commissioners, along with plans for the next steps and advice on how to persuade residents they'd be a lot happier without one of Miami Beach's best and most historic music venues in their backyard. According to Miami Today, those recommendations include hiring a traffic expert to allay residents' concerns about increased gridlock; capping the height of the planned hotel at the same level as the Lincoln Road clock tower; and urging that the Fillmore theater should be "rebuilt and revitalized."

Commissioner Ricky Arriola explained his vision for the rebuilt Fillmore theater to New Times: Located on Convention Center Drive, on the complex's western side, the venue would have about 2,500 seats, ideally with a smaller theater attached for local community groups and small performance groups. He hopes the city will bring in a world-class architect and audio-visual technicians.

"As a bare minimum, it would have the same number of seats. But whatever is built, there is going to be a better Jackie Gleason Theater, from everything from acoustics to back of stage," he said.

"If we don't have a great venue, performers will to go Fort Lauderdale. I like to think that the new iteration of the Jackie Gleason Theater will help us get top performers for decades to come."

This vision, of course, is not yet backed by any concrete plans and still requires demolishing one of the Beach's most beloved landmarks.

Having a "headquarters" hotel, especially one as tall at the clock tower on Lincoln Road, could usher in new business to South Beach, making the convention center more accessible to visitors. But the area isn't exactly lacking in nearby lodgings, from the swanky to the seedy.

Regional performing venues, on the other hand, are harder to come by, especially ones that have helped imbue Miami Beach with theatrical charm.

The city's plans bring up plenty of other questions for voters. How long will it be before major acts like Run the Jewels, Louis C.K., Phoenix, Dave Chappelle, and Jack White can play in the "revitalized" venue? Will the new hotel be a feat of engineering or an aesthetic wonder? Why move the Fillmore to another part of the convention center complex instead of building the hotel on that new site?

Maybe a convention center hotel is needed to draw larger crowds. But the Fillmore is a bona fide icon of South Beach life. Demolishing that icon might be better for visiting businesspeople, but it also severs a tie to the Beach's long history of performing culture.

Mayor Levine did not immediately respond to requests for comment.