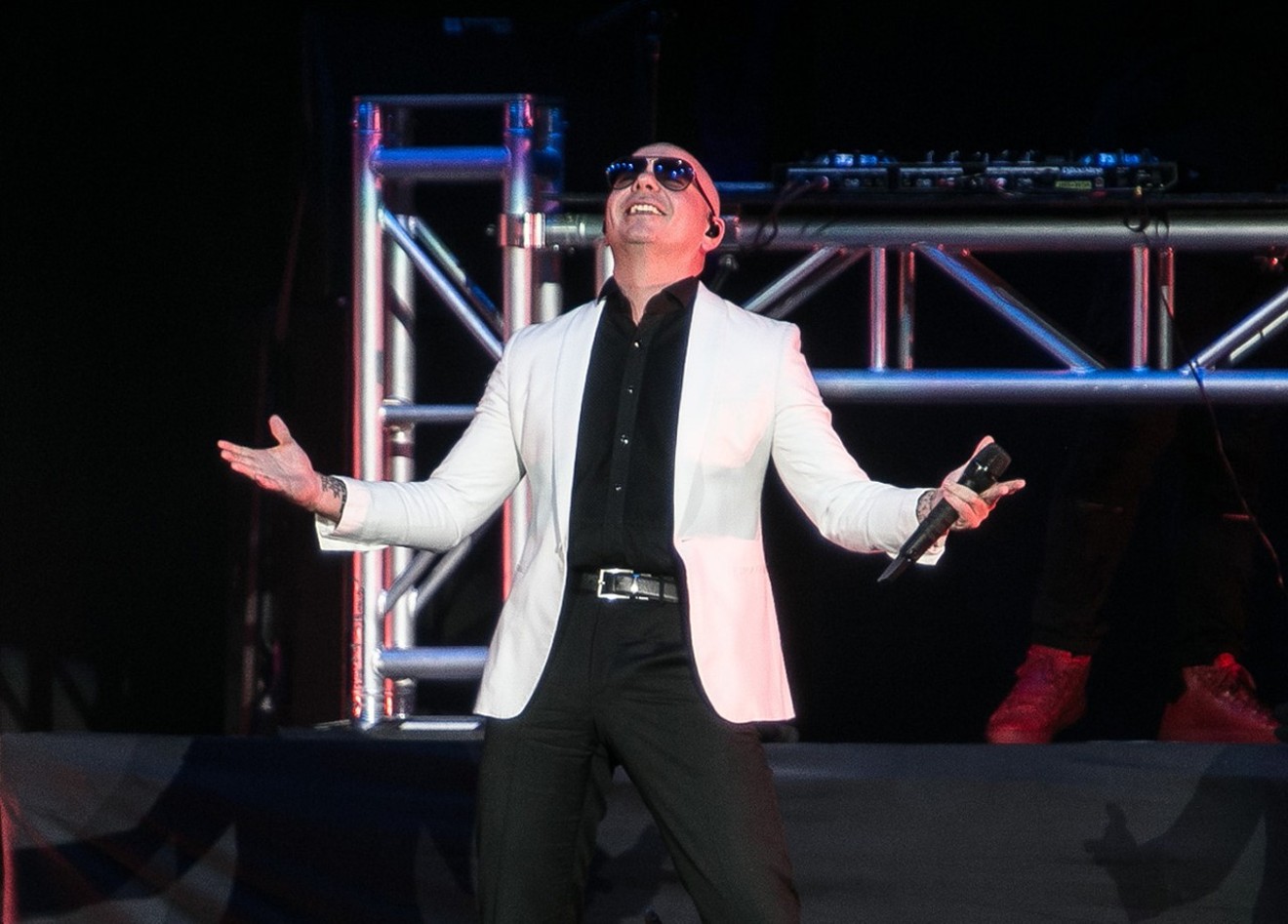 Pitbull thanks the muse for inspiring his song, "Blood Sport." Photo by George Martinez
Like most Miamians, I've spent the past week on a coke bender. To be clear, I have crippling anxiety and am convinced even one bump of cocaine would kill me, but I'm on a different kind of binge: I've spent the past seven days obsessively watching — and rewatching — the six-part, Billy Corben-directed Netflix docuseries Cocaine Cowboys: The Kings of Miami.

A lifetime of living in Miami prepared me for some of the most surprising twists in the epic tale of Willy Falcon and Sal Magluta: Learning that one of the most notorious drug rings in U.S. history emerged out of what should have been my home high school barely fazed me. The anecdote about the U.S. attorney who drowned his sorrows at a strip club and bit a stripper after a disappointing legal defeat elicited cackles, but it made sense in the city I've called home for three decades.

Still, nothing could have prepared me for the sheer crappiness of the docuseries' opening theme: Pitbull's "Blood Sport."

As a Little Havana native, I can't help it that part of me is rooting for Pitbull. He grew up reciting José Martí's poetry on command as a schoolkid, just like I did. He proudly reps Miami years after becoming Mr. Worldwide. He's a surprisingly adept performer. And although I fundamentally believe that charter schools pose a serious threat to public schooling, I appreciate the intentions that led Pitbull to found the SLAM! Miami charter school in the community that raised him.

The lyrical crimes begin just two seconds into the song:

"Everybody raps about coke/Everybody's sold a little yay."
Right off the bat, Pitbull tells us he's about to step on some heavily trod subject matter. Right away, I'm compelled to click the "Skip Intro" button. The two minutes and seven seconds that follow make me wish I did. Plus, telling me "everybody's sold a little yay" does nothing to sell me on the uniqueness of Willy and Sal's epic misadventures.

"But now, I shall become the cocaine!"

Still, this raises the question: Why would someone rap a song from the perspective of cocaine?

"I've been called all types of names/Like Perico, Yayo, Snow, Blow, and Kane."

After taking on the persona of cocaine itself ("I've been processed, packaged, delivered in bricks/I've been cut, cooked, chopped and whipped"), Pitbull puts a coked-up spin on Schoolhouse Rock by giving us an informative, educational song that enumerates all the lighthearted nicknames humans have given to this addictive and deadly substance.

"I'm all white but I produce green."

This is the kind of wordplay that's consistent with Schoolhouse Rock's target age demographic.

Here, Pitbull outlines how you ingest cocaine and then outlines what dealers do with cocaine. He already hit you over the head with the explanation at the top of the song, but now he's making sure you clearly understand the chorus too.

Does cocaine have, um, emotions?

"When I was in the streets heavy they had codes and rules/Now it's just steady foes and fools/That's why they get found stiff like frozen food."

Sure, it rhymes. The background image of frozen, store-bought ham croquetas really elevates this part of the opening sequence.

"Take a sniff and let me remind you/Woo!"

Although he's now "become the cocaine," you know Pitbull had to get one more of his trademark screams in there before the song closed out.

I wish I were as psyched about this song as Pitbull appears to be. There was only one man for the job of soundtracking this only-in-Miami story. Too bad Yayo and Kane showed up instead of Mr. 305.
KEEP MIAMI NEW TIMES FREE... Since we started Miami New Times, it has been defined as the free, independent voice of Miami, and we'd like to keep it that way. With local media under siege, it's more important than ever for us to rally support behind funding our local journalism. You can help by participating in our "I Support" program, allowing us to keep offering readers access to our incisive coverage of local news, food and culture with no paywalls.
Make a one-time donation today for as little as $1.