As a portrait of the late powerboat racer Don Aronow gazes down from above Don’s Five Star Bar, Alfred Spellman, Billy Corben, and Jim DeFede reminisce about Miami’s days of blow and bought-off federal jurors. Photo by Michele Eve Sandberg

Nearly 15 years ago, Miami Beach-based film production company Rakontur released Cocaine Cowboys, the quintessential Magic City documentary about the gangsters who dominated the drug trade in the 1980s and the lawmen who chased after them. The wild, frenetic film was an underground sensation in hoods across America and made pop-culture icons out of cocaine traffickers like murderous drug queenpin Griselda Blanco. But the tale told by Billy Corben, Alfred Spellman, and David Cypkin — the troika from Northeast Miami-Dade who are Rakontur's principals — was actually Plan B.

Originally, the Rakontur brain trust wanted to document the rise and fall of Willy Falcon and Sal Magluta, a pair of Cuban American immigrants who came to dominate Miami's drug underworld in the late Seventies through the Eighties. Captivated as youths by a series of longform yarns about Falcon and Magluta by Jim DeFede (now an investigative reporter at WFOR-TV but at the time a New Times staff writer), Corben, Cypkin, and Spellman wanted to create a real-life Goodfellas treatment about their home city.

But they picked the wrong time to profile the criminal organization headed by Los Muchachos, as Falcon and Magluta were known, because both men were still in the crosshairs of an aggressive federal prosecution. More than a decade later, Falcon was immediately deported to the Dominican Republic upon release from prison in 2018, while Magluta remains locked up for life in a Supermax federal lockup in Colorado. Members of the pair's inner circle finally opened up to Rakontur, resulting in a six-part docuseries Cocaine Cowboys: Kings of Miami, which premieres August 4 on Netflix.

New Times sat down with Corben, Spellman, and Defede on a humid, late-July afternoon at Don's Five Star Dive Bar, the new, windowless, Eighties-themed drinking hole inside the Selina Gold Dust Motel on Biscayne Boulevard. With reruns of Miami Vice playing on an endless loop behind the bar and a bottle of Jim Beam DeFede ordered to lubricate the proceedings around the table, we reminisced about Los Muchachos and the longform approach to journalism that inspired the Rakontur crew's approach to filmmaking.

New Times: Let's start by breaking down how you got to this installment of Cocaine Cowboys.

Alfred Spellman: I first heard the names Willy and Sal when I was in eighth grade. My best friend's dad was a criminal defense lawyer in Miami Beach and had gotten this case. Los Muchachos had gotten busted in October 1991. When [the dad] would drive carpool, he had his car phone on speaker, he would talk back and forth about [the case.] And I would hear all about Willy Falcon and Sal Magluta.

Billy Corben: It is a very "Only in Miami" scene. Riding carpool with a criminal defense attorney who is barking on the cellphone about Willy and Sal.

Spellman: Billy and I graduated high school in 1996, and this was the era of Miami New Times with a murderer's row of alt-weekly journalists in Miami, like Jim DeFede. Our biggest influences growing up, about our views of South Florida, were [Miami Herald columnist] Carl Hiaasen, [talk-radio icon] Neil Rogers, and the Miami New Times writing of that era. 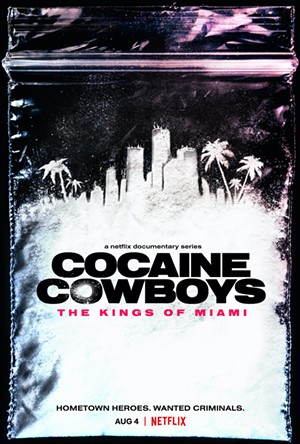 Spellman: When Jim's coverage of Willy and Sal came out, I was in eighth and ninth grade. I'd go to the New Times box every week. We made this documentary in 2000 called Raw Deal: Question of Consent. It premiered at the Sundance Film Festival in 2001. It was about this alleged rape of an exotic dancer at a fraternity house at the University of Florida. It was extremely controversial. At the time, we were the youngest filmmakers ever invited to Sundance and the only ones ever from South Florida. It blew up. It was this huge, huge success. Agents and managers were calling us, asking us, "Are you going to New York or Los Angeles?" Everyone kind of expected us to move. We told them, "We want to go back to Miami and tell stories about our hometown the way Martin Scorsese or Spike Lee tell New York stories or Barry Levinson told Baltimore stories."

Corben: We wanted to do in nonfiction filmmaking what New Times was doing, what Carl Hiaasen was doing, and what Neil Rogers was doing.

Spellman: We decided to make this doc about growing up in Miami in the 1980s based on the theory that modern Miami was built on the back of the cocaine trade. No other city could kind of point to a single illegal industry like that.

Corben: It was the only successful case study of Ronald Reagan's trickle-down economics in history.

Spellman: We were trying to figure out how to make this story about the cocaine era in Miami. I turned to Billy and Dave and said, "We gotta do Willy and Sal." This is in 2002, and Sal is in the middle of his second [federal] trial.

Corben: We needed characters. We needed a beginning, a middle, and an end. It was obvious it would be Los Muchachos. That was the documentary we wanted to make. But sometimes stories need to ripen — there needs to be some distance for people.

Jim DeFede: Is this all an excuse as to why it took you 12 years to do a Falcon and Magluta documentary?

Corben: No, no, no! The reason it took this long is because this is Alfred's short version of the story.

Spellman: Jim, when did you arrive in Miami?

DeFede: I got here in 1991. Willy and Sal was the first story I delved into bigtime.

New Times: What made you want to jump on it knowing it was a story that everybody was going to be on?

DeFede: I give credit to Jim Mullin. He was the editor of the Miami New Times at the time. He was dating a woman, Linda, who was working at U.S. News & World Report. And Linda was really interested in Willy and Sal for a very specific reason. The period of time this occurred is critical. The invasion of Panama was two years earlier. And the newly installed president of Panama [an attorney named Guillermo Endara] was the registered agent on all of Willy and Sal's companies that they laundered money through. Jim was hearing from Linda about this angle of it. Jim would come to the paper excited about what was going on. I realized this is also a Miami story: Two Miami High dropouts who go on to lead what the press release said at the time was a $2 billion, 75-ton cocaine empire. How do you not look at that and say, "This is incredible"? I thought this was a great way into understanding Miami. Willy and Sal are a big reason I wanted to stay.

Corben: Here's a secret. When you are finishing a Netflix series, you have no time to watch Netflix.

Spellman: It's not done yet.

DeFede: What is not done?

DeFede: I don't understand that.

Corben: I don't either.

DeFede: Shit on the hand that feeds you. Is Netflix a pain in the ass to work for?

Spellman: Not at all.

Corben: It's just working on the finishing touches. It's pulling-up-the-knot-on-the-tie kind of thing. It's going to premiere in like 191 countries in 30-plus languages.

New Times: Well, we gotta circle back, because you guys haven't really answered why it's taken this long to tell the story of Willy and Sal.

Corben: Well, we couldn't tell the story when we wanted to in the mid-aughts. Cocaine Cowboys was Plan B. We always wanted to come back to them. We hear from Marilyn Bonachea fresh from witness protection. We did days of interviews with Marilyn, who was Sal Magluta's girlfriend since high school, basically. She became his bookkeeper and his confidante. She was facing 200 years in prison before she flipped on him. Through the years, as we were doing other projects, we would do interviews [with other subjects in the saga] and started to accumulate an archive of Willy and Sal interviews. At some point, we had accumulated so much material that it was not a feature documentary. You could not tell the story in a 90-minute or two-hour block. Then the documentary series was invented with The Jinx on HBO and Making a Murderer on Netflix. Suddenly people want documentaries that are six, eight, and ten hours long. All of a sudden there is a market for it that didn't exist before.

Cocaine Cowboys: The Kings of Miami. Premieres on Netflix Wednesday, August 4.
KEEP MIAMI NEW TIMES FREE... Since we started Miami New Times, it has been defined as the free, independent voice of Miami, and we'd like to keep it that way. With local media under siege, it's more important than ever for us to rally support behind funding our local journalism. You can help by participating in our "I Support" program, allowing us to keep offering readers access to our incisive coverage of local news, food and culture with no paywalls.
Make a one-time donation today for as little as $1.