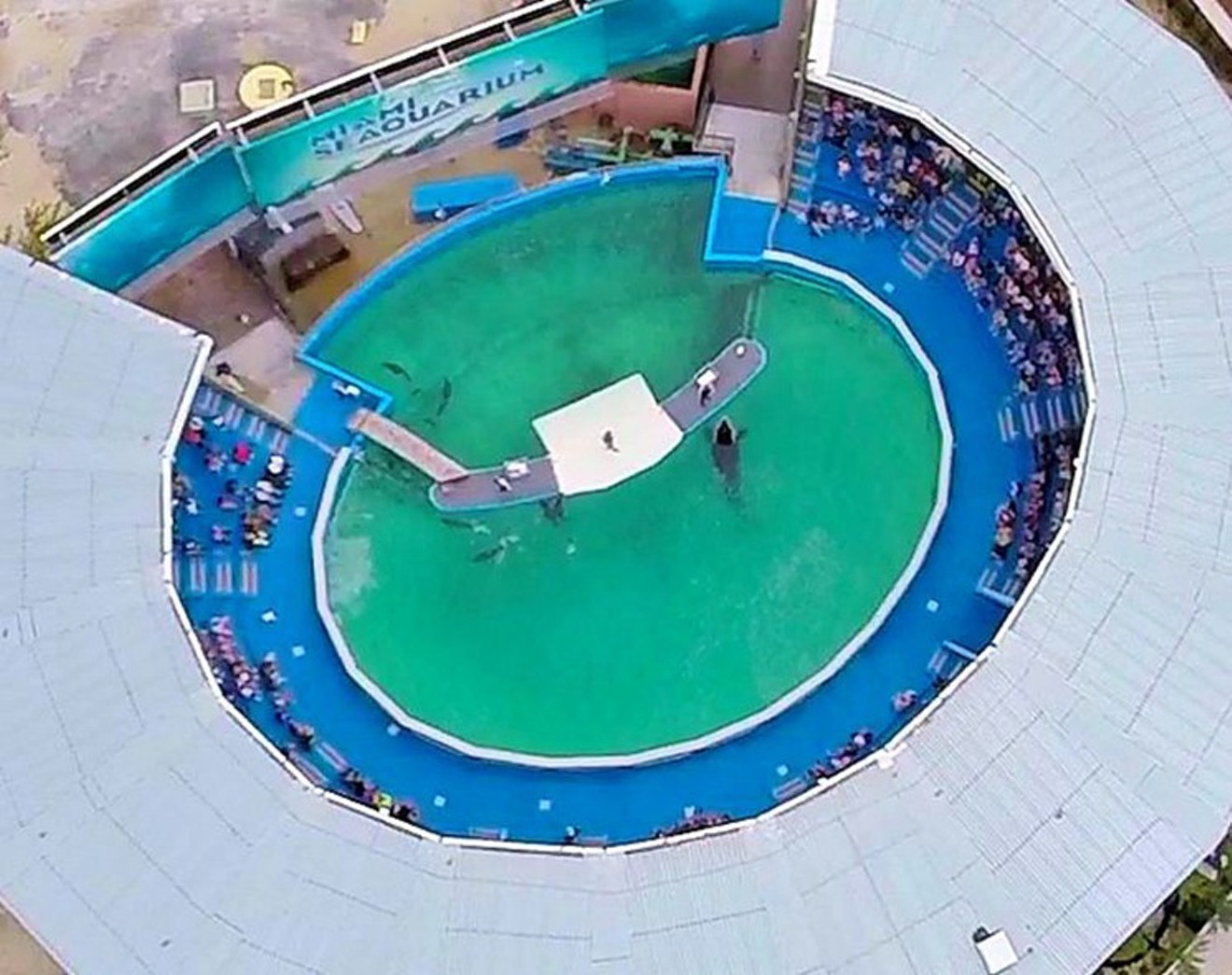 Lolita the orca has lived in this tank for more than 45 years. Photo courtesy of Drones for Animal Defense
For decades, Miami Seaquarium has alleged that its tank holding the orca Lolita (AKA Tokitae) meets federal space standards. And according to letters from officials at the Animal and Plant Health Inspection Service (APHIS), a division of the USDA, that was the case. But animal activists have long argued that Lolita's tank doesn't actually meet the minimum standards for space because of a concrete barrier in the center of the pool that's used as a "work island" for trainers. That barrier doesn't allow Lolita to swim twice her length in one direction, which activists claimed was required in the Animal Welfare Act.

Now the USDA is reconsidering its judgment. According to PETA, the agency recently reviewed the case and concluded that Lolita's home might not meet minimum size requirements under the federal Animal Welfare Act. The decision is due in part to the trainers' work island.

The USDA inspector stated: "This enclosure is essentially two pools. In this scenario, the largest pool would only have an MHD of 35 feet; this falls short of the minimum requirements for an orca.”

The investigation is just the latest development in the lengthy battle over Lolita's life. Last year, architectural experts told New Times that it seemed that the minimum space requirements weren't met after all. A few months later, the director of the Marine Mammal Commission (MMC), Rebecca Lent, announced — apparently agreeing with activists and the design experts — that there's no room in the federal law to permit concrete "obstructions" when minimum space requirements are infringed upon.

According to Lent, the concrete work island inhibits Lolita from stretching out twice her length, preventing the orca from making normal postural movements. Though the MMC is an independent government body specializing in the care of marine mammals, the director's word didn't have power to directly change Lolita's situation. The USDA, not the MMC, has the authority to declare Lolita's tank noncompliant with federal standards.

One APHIS official, after "triple-checking" with experts at the agency, told New Times that obstructions such as the concrete work island were not allowed when calculating official measurements for marine mammal tanks. However, she seemed to change her story when it was revealed the tank in question was Lolita's.

For years, APHIS officials have maintained that the tank is compliant. "APHIS believes that the definition of MHD in the regulations already allows for unique circumstances and enclosures," Tanya Espinosa, a public affairs officer at the agency, says.

But this recent inspection has called that judgment into question. The USDA might further examine the compliance of Lolita's tank — now with renewed zest in light of the inspector's report. Perhaps Lolita will be moved to a sanctuary where she has more room to swim. But that's not quite enough to outweigh the tragedy: If the inspectors' concerns prove true, it means the famous orca has been swimming in an illegal tank for about 50 years.

"APHIS appreciates OIG’s recommendations and the opportunity to respond," Espinosa adds. "APHIS agrees with the intent of many of the recommendations and will work to refine its Animal Care program to ensure the continued welfare of captive marine mammals in the United States."

The Seaquarium did not immediately respond to requests for comment. New Times asked APHIS officials about the specifics of the Animal Welfare Act, but they have not yet responded.