Maybe it's a bit of an oddball pairing, but if you were born before 1970, you've probably enjoyed songs by both Rod Stewart and Cyndi Lauper. Whether you're more in the "Maggie May" or the "Time After Time" camp, these legends have enough hits to keep you entertained the whole night, although you can expect more recent projects to be in the mix. Stewart wrote and produced much of 2015's Another Country, and Lauper released a country album early last year. 7:30 Thursday at Hard Rock Live, 1 Seminole Way, Fort Lauderdale; 954-797-5531; seminolehardrockhollywood.com. Tickets cost $50 to $887.

For this month's edition of PAMM's Free Community Night, the Miami Music Club is bringing Rhode Island performance artist and musician RRLEW and Oakland electronica project Cube. The two will perform alongside Romulo Del Castillo of Schematic Music Company on the terrace while a screening of John Akomfrah's Handsworth Songs, presented by the Black Audio Film Collective, plays in the auditorium. Whether you're into lesbian utopian operas or the African diaspora experience, this eclectic night will range from the futuristic to the nostalgic and is sure to be anything but boring. 5 p.m. Thursday at Pérez Art Museum Miami, 1103 Biscayne Blvd., Miami; 305-375-3000; pamm.org. Admission is free.

Following his first performance of "A Hard Day's Night" since 1965 and critically acclaimed shows across the United States, Paul McCartney is playing his first show in South Florida in seven years. The 75-year-old is still leaving audiences in awe while pulling from a career of music that has defined rock 'n' roll, and the energy and variety of his shows are evidence that he doesn't plan to stop anytime soon. If for some reason you need to be convinced to see this show, the historical significance of seeing a Beatle should be enough. 8 p.m. Friday at American Airlines Arena, 601 Biscayne Blvd., Miami; 786-777-1000; aaarena.com. Tickets cost $30 to $250.

We can't tell you why the word "indie" seems to immediately summon opinionated men in skinny jeans touting the virtues of "raw" and "real" production, but we can say the Miami Independent Film Festival will be awesome. First, it's free — a lineup of 18 films shown over three days will be open to the public on a first-come, first-served basis. Second, the fest spends all year receiving and selecting films submitted from all over the world, with monthly winners and jury feedback to filmmakers. All you have to do now is show up and enjoy. Friday, Saturday, and Sunday at Miami Beach Cinematheque, 1130 Washington Ave., Miami Beach; 305-673-4567; miamindiefest.com. Admission is free.

Metallica's early fans are old enough to have grown children, but that doesn't stop the band from continuing to make the kind of metal that every teenage boy can angst to. Beyond that, these veterans are responsible for catapulting metal into the mainstream and remain one of the most commercially successful bands of all time. Avenged Sevenfold and Volbeat are joining the bill to make this a night of truly heavy, guitar-shredding glory, so throw on that black band shirt you haven't washed since 11th grade, and get to thrashing. 6 p.m. Friday at Hard Rock Stadium, 347 Don Shula Dr., Miami Gardens; 305-943-8000; hardrockstadium.com. Tickets cost $55 to $575. 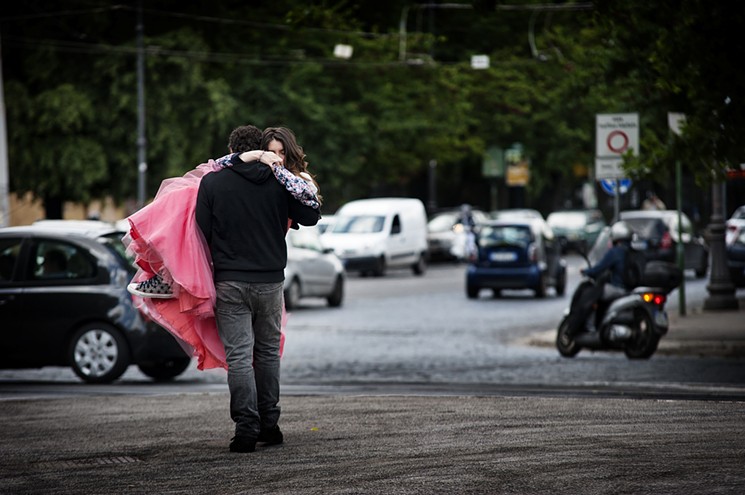 Not even a year after its inception last November, Dimensions Dance Theatre of Miami has impressed ballet aficionados and novices alike with its innovative approach to classical movement. For the company's latest showcase, Fiebre, the troupe will perform three ballets for the first time in Miami, including the title piece by Vicente Nebrada, with accompaniment by Alain Garcia and his Latin Power Band. Two additional ballets will round out a program of international choreography from local masters of dance. 8 p.m. Saturday at the South Miami-Dade Cultural Arts Center Main Stage, 10950 SW 211th St., Cutler Bay; 786-573-5300; smdcac.org. Tickets cost $25 to $75.

Comedy used to be a boys' club before jokes about nagging wives and rape began to get old. Thanks to programs such as Comic Cure's Florida's Funniest Females, you have options now. If you missed the event in April, Gina G, Sheena Reagan, and Angela Nacca — the winner, runnerup, and finalist of that night, respectively — will take their talents to South Miami-Dade. CinCin Boisson will add some Caribbean style to a night of women-led laughs that range from deadpan humor to full-on ridiculousness. 8:30 p.m. Saturday at South Miami-Dade Cultural Arts Center Black Box Theater, 10950 SW 211th St., Cutler Bay; 786-573-5300; smdcac.org. Tickets cost $20.

Born in New York and raised in the MIA, Eric Dasilva is a comic of Brazilian descent known for his work on the festival circuit. His son and daughter, dating tips, and weight are all topics in a routine that's a lot like sitting at a bar with your oldest friends competing for who can come closest to being offensive without pissing anyone off. Before you see Dasilva's Have-Nots show this weekend, you can check him out on Hulu or Pandora. 8 p.m. Saturday at Open Stage Club, 2325 Galiano St., Coral Gables; havenotscomedy.com. Tickets cost $15 to $40.

A robust culture surrounds the tradition of tango in Argentina, where the world-famous dance was born. To celebrate Argentine Independence Day, Tango Times Dance Company will present Beyond Tango, a multifaceted program of folk dance, bombos drumming, boleadora performances, and poetry to encompass this South American country's history and soul. The night will culminate in a tango performance by 14 dancers accompanied by an instrumental quartet and vocals by Cristina Longo. 8:30 p.m. Saturday at Manuel Artime Theater, 900 SW First St., Miami; 305-960-4680; tangotimes.us. Tickets cost $25 to $45.

If you haven't had the chance to hit up the summer music festival circuit, have no fear: You can get your fill of fire spinners, hula-hoopers, and fuel for your LSD trip at the Bluetech show. Ovoid, Shanti, and Miami natives Afro Monk and Optical Delusion will be there to support another night of electronic dub-bass-sub-psych-uhntz-uhntz-ness. Guided meditation and yoga will be on the docket, so don't be afraid to let your freak flag fly. 10 p.m. Saturday at Armando Records, 30 NE 14th St., Miami; 786-450-2260; facebook.com/phreequency. Tickets cost $15 cost $50.

The Smiths' songs will feel just as deliciously emotional when you have an AARP card as they did when you first heard them as a teenager, steamy tears streaming down your zits. So no matter how many times the band's bassist, Andy Rourke, comes to town, you will be there to worship him. The old-school goth night, Kitchen Club, is bringing Rourke to Churchill's for a DJ set and meet-and-greet. The night will be hosted by occasional New Times contributor Notorious Nastie and feature DJs 16 Bit and South Beach legend Tommy Gunn. A punk stage and a "Dungeon Room" stage will provide a platform for local acts to show off for the former Smith. 9 p.m. Saturday at Churchill's Pub, 5501 NE Second Ave., Miami; 305-757-1807; churchillspub.org. Admission costs $5 to $10.

Click "next" for more things to do in Miami this week.