No one knows Florida Man better than New Times. We've been the experts on that mythical poor-decision-maker and violator of both God's and man's laws since our inception.

However, the creators of Florida Man: The Card Game — who know a thing or two about how to help adults have a good time — could soon take over our fiefdom.

Married couples Dave and Trish Pifer and David Ritchie and Miranda Bressman, co-owners of Los Angeles' comic shop the Secret Headquarters, are the team behind this card game based on the wild headlines that come out of the Sunshine State.

"We’ve been looking at Florida Man headlines for a few years now, whenever they made the national news. We’d end up laughing and shaking our heads," Ritchie recalls.

For 14 years, the Pifers, Ritchie, and Bressman have run an orderly store in the neighborhood of Silver Lake that publishes and carries mainstream, indie, and small-press comics, zines, and books. But they are South Floridians at heart. Pifer grew up in Pembroke Pines, and Ritchie's family moved from Chicago to Davie when he was a teenager. Both Dave Pifer and Ritchie attended Cooper City High School in Broward County. And after graduating from high school, Pifer worked as a paramedic in North Florida, where he saw "actual Florida Man stories every day," Ritchie says. 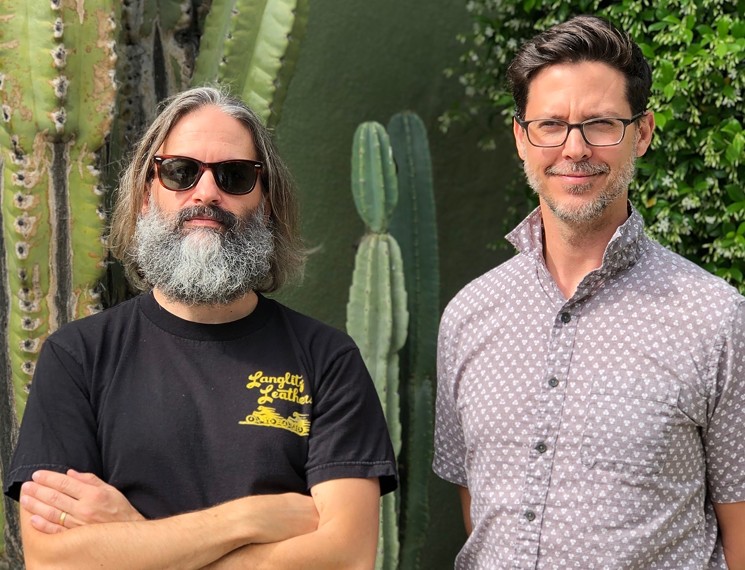 Dave Pifer and David Ritchie
Photo by Miranda Bressman
"I think having both lived in Florida and having moved away might give us the best perspective," Ritchie says. "We have firsthand experience with Florida living: the alligators in the backyard, the ten-minute rain showers every day at 2 p.m., the humidity. Now, outside of Florida, we can look back with a little wider view."

The group came up with the idea for the game while preparing for a Thanksgiving trip. The two families have long celebrated the holiday together, with the adults playing card games after their kids go to bed. "I introduced the idea with Florida Man headlines written on scraps of paper," Ritchie says. "We gave the idea a try. It worked pretty well and we just ran with it. We had meetings every weekend after that, reworking the original idea, introducing different elements to it until we had it to a place where we thought it was time to put it out in the world."

They're working with respected manufacturer AdMagic to create an original and entertaining game. But first, they're pushing their Kickstarter campaign, which runs through May 17, to raise the funds to make the most fitting homage to the Sunshine State possible.

"Our game is for all of the people that have embraced Florida Man as part of their lives. The Florida Man Card Game gives us all a chance to interact directly with our favorite headlines and characters," Ritchie says, emphasizing it's not for children, because duh.

Asked if the crew would be tackling other states' headlines after this, Ritchie responded with a question of his own: "Can there be a better state than Florida?" Well played, sir. Well played.
KEEP MIAMI NEW TIMES FREE... Since we started Miami New Times, it has been defined as the free, independent voice of Miami, and we'd like to keep it that way. With local media under siege, it's more important than ever for us to rally support behind funding our local journalism. You can help by participating in our "I Support" program, allowing us to keep offering readers access to our incisive coverage of local news, food and culture with no paywalls.
Make a one-time donation today for as little as $1.