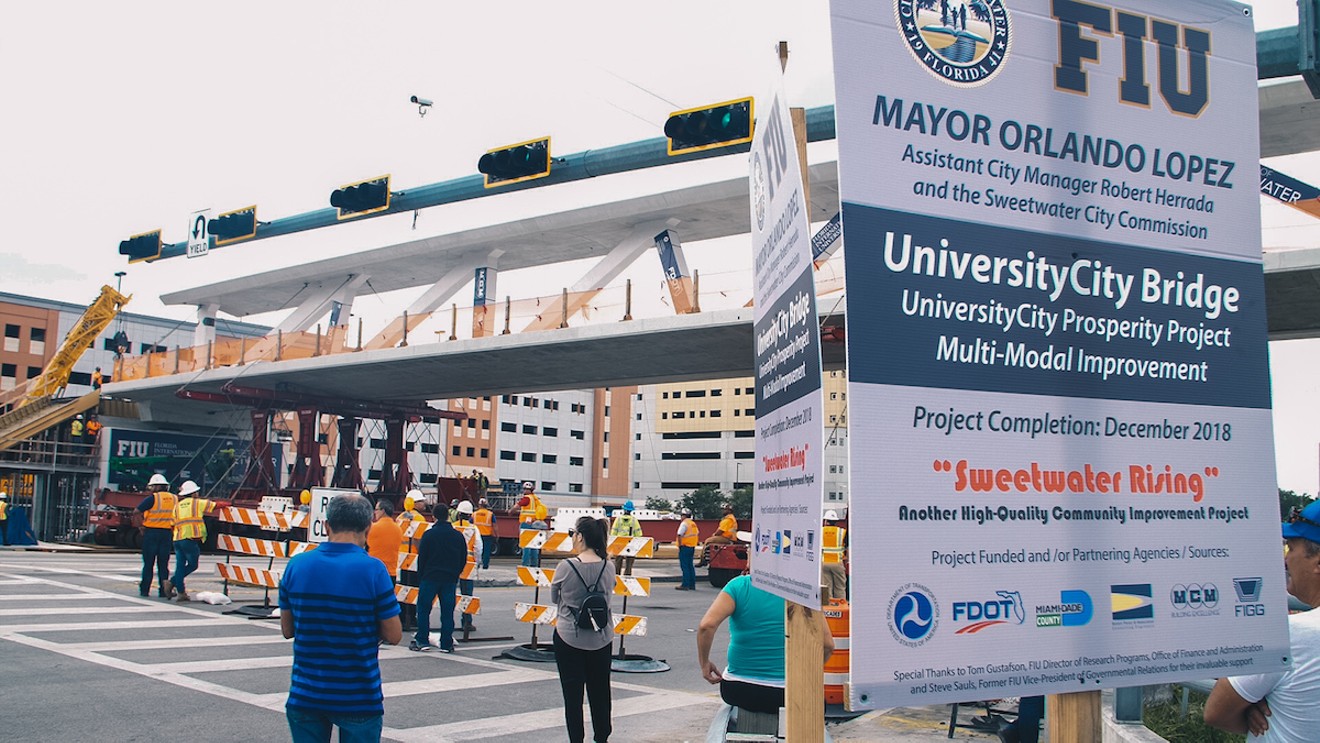 Two of the biggest firms that built the Florida International University pedestrian bridge that collapsed today have recently been accused of unsafe practices. In one of those cases, another bridge project in Virginia toppled onto workers.

Police and fire-rescue personnel are still on the scene at FIU, where multiple people died in the rubble of the 950-ton bridge, which crumbled onto SW Eighth Street traffic. Investigators will likely spend weeks sorting out what went wrong on the project, which was described by the school as a state-of-the-art bridge made with new, high-tech materials.

Munilla Construction Management, a South Florida firm, beat out three other finalists to win the bid to build FIU's bridge, which was part of a $14.2 million project funded by the U.S. Department of Transportation. The firm partnered with Figg Bridge Group, which is headquartered in Tallahassee and has worked on iconic projects such as the Sunshine Skyway Bridge in Tampa.

Munilla was accused in Miami-Dade Civil Court March 5 of severely injuring a TSA employee at Fort Lauderdale-Hollywood International Airport because of shoddy work. According to the lawsuit, Munilla — which has a major contract to expand the airport — built a "makeshift bridge" through an area where airport workers must walk to reach restrooms.

Jose Perez, a TSA worker, was walking on the bridge October 20, 2016, when it "broke under [his] weight" and sent him falling to the ground.

"They built this makeshift bridge in the area where all the employees work, and it was poorly done. He fell and hurt himself really badly," says Tesha Allison, a lawyer representing Perez. "He had multiple broken bones and damage to his spine... They did shoddy work."

Update 2/16: A spokesperson for Munilla says that the "makeshift bridge" mentioned in the lawsuit was actually just a plywood pathway and that the case is a simple slip-and-fall at a construction site. Here's the statement from the company:

In regard to the incident at Fort Lauderdale Hollywood International Airport that is being reported on, we want to make it clear that there is no bridge, or temporary bridge, at this project. This was simply a trip and fall accident that occurred on the ground floor involving a piece of plywood that was covering a sidewalk under construction. To report that this is in any way similar to the tragic accident involving the FIU pedestrian bridge is simply wrong and irresponsible.


The company also included a photo of the alleged incident site, which shows a simple wooden platform:

The FIU project isn't the first major bridge built by Figg to collapse in recent years. A Figg-assembled span in Virginia fell apart in June 2012 while under construction. Workers were installing a 90-ton concrete portion of the South Norfolk Jordan Bridge when it dropped 40 feet onto railroad tracks below, according to the Virginian-Pilot.

Four workers suffered minor injuries, but state regulators later said it was pure luck that no one was killed.

"They were fortunate that the injuries were not more serious," Jay Withrow, director of the legal support division for the Department of Labor and Industry, told the Virginian-Pilot.

Figg was fined $28,000 by the Virginia Department of Labor and Industry, which found the company had violated several safety rules. It had failed to gain written consent from a manufacturer before modifying a girder used in construction. The company was also cited for not doing daily, weekly, and monthly inspections of the girder; not providing adequate training for using the equipment; and not having certain safety procedures in place for its maintenance and repair, according to the Virginian-Pilot.

The company's manager on that project, W. Jay Rohleder, said in a written statement to the Virginian-Pilot that the matter had no bearing on the bridge's stability.  "The incident that occurred during construction was a construction equipment property damage issue that had nothing to do with the final bridge," Rohleder said.

Figg was later sued in federal court by the owner of the railroad tracks, Norfolk and Portsmouth Railroad Company. That case was dismissed with prejudice in December 2013. See more photos from the FIU bridge collapse here.
Photo by Michele Eve Sandberg
Munilla has yet to respond to Perez's lawsuit in court; an operator at the company said no one was available to comment today. But around 3 p.m., the company tweeted a response to the tragedy.

Figg also released a statement, via the Fort Myers News-Press:


"Our deepest sympathies are with all those affected by this accident. We will fully cooperate with every appropriate authority in reviewing what happened and why. In our 40-year history, nothing like this has ever happened before. Our entire team mourns the loss of life and injuries associated with this devastating tragedy, and our prayers go out to all involved.”

"The Jordan Bridge opened in October 2012 and restored a vital connection to Portsmouth and Chesapeake. The incident that occurred during construction was a construction equipment property damage issue that had nothing to do with the final bridge. It resulted in the need for a new temporary erection truss to build the last four spans of the bridge. A citation issued by the state was not related in any way to the structural integrity of the completed project, and is not the reason the erection truss required replacing. The collapse of the pedestrian bridge in Miami is an unprecedented event – no other bridge designed by FIGG Bridge Engineers, Inc. has ever experienced such a collapse."