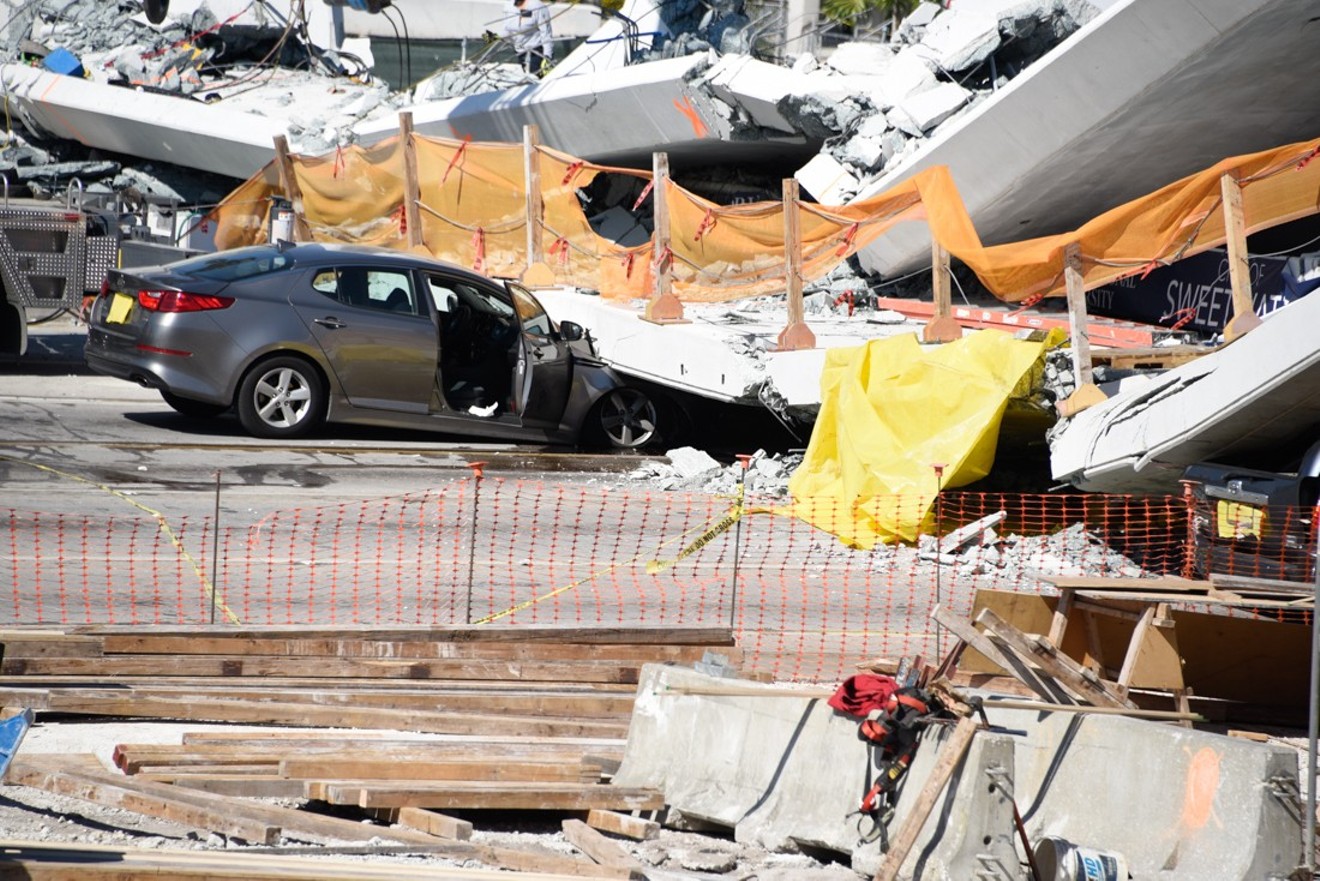 See more photos from the FIU bridge collapse here. Photo by Michele Eve Sandberg
Update: Two of the biggest construction firms that designed and built the bridge been accused of unsafe practices in the past.

A new, $14.2 million pedestrian bridge on the Florida International University Modesto Maidique Campus in West Miami-Dade has collapsed. People are reportedly trapped under the rubble. Police have confirmed multiple deaths but as of 4:30 were not able to list an exact number of casualties. Florida Gov. Rick Scott is en route to the site.

Just before 2:45 p.m., FIU announced it was stunned by the accident and working to rescue anyone who might still be trapped.

"We are shocked and saddened by the tragic events unfolding at the FIU-Sweetwater pedestrian bridge," FIU officials wrote. "At this time we are still involved in rescue efforts and gathering information. We are working closely with authorities and first-responders on the scene. We will share updates as we have them."

"FIU is about building bridges and student safety," FIU President Mark Rosenberg said Saturday. "This project accomplishes our mission beautifully. We are filled with pride and satisfaction at seeing this engineering feat come to life and connect our campus to the surrounding community where thousands of our students live.”

According to media reports and video from the scene, people and several cars are trapped in the rubble. FIU media releases say the bridge weighs 950 tons. Miami-Dade Fire Rescue said in a press conference that it received the first call about the collapse around 1:30 today. Fire Rescue said eight cars were trapped under the structure when they arrived, and that eight people had been brought to local hospitals for treatment.

Sweetwater Mayor Orlando Lopez said he received the first call about the incident at roughly 1:48 today from someone working near the bridge. He specifically thanked one local police who arrived first on-scene and helped keep one victim alive until paramedics arrived.

Figg Bridge Engineers, the company that designed the project, told New Times today that the company does "not have any information about that project." Construction began in 2017, but the bridge was not expected to open for pedestrian use until 2019. Figg was responsible for the Sunshine Skyway Bridge over Tampa Bay.

Police calling doctors and nurses to the scene. @MiamiHerald pic.twitter.com/lgvkNTdQSJ

FIU tweeted out of the bridge "swinging" into place only five days ago — FIU press materials noted the construction method was designed to allow the structure to be assembled as quickly as possible.

"This technique reduced potential risks to workers, commuters pedestrians and prevented traffic tie-ups in the area," the university wrote.

Just three days ago, a firm called BDI celebrated online that the company was "thrilled to have performed structural monitoring" on the project. After the collapse, BDI deleted its tweet: 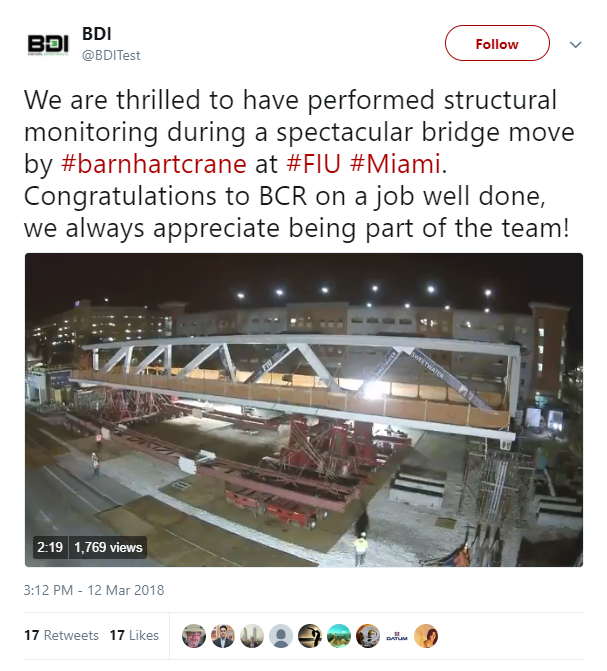 via Twitter
Likewise, Munilla Construction, the South Miami-based firm that installed the bridge, celebrated working on the project at 11:29 a.m. today — mere minutes before the bridge toppled. Munilla noted that a company project executive, Leonor Flores, is herself an FIU graduate. [Note: FIU has since issued a press release clarifying that Flores did not work on this bridge project, specifically.]


On Sat., the local community gathered to watch the 950-ton @FIU Pedestrian Bridge move into place. In the crowd was FIU alumna & MCM's Project Exec. Leonor Flores, who got to share her work with her family. @FIUnews shares more about the special moment: https://t.co/1m5ek5NjOf

The structure was funded by the U.S. Department of Transportation. It is part of a project that is expected to include sidewalks, a plaza, and even Wi-Fi.

Though FIU had trumpeted the success of the plan for weeks, by 3 p.m. Thursday, the university had deleted at least one news release from its website about the bridge.

“This bridge is the result of great support from our congressional delegation and the U.S. Department of Transportation,” FIU's senior vice president and CFO, Kenneth Jessell, announced over the weekend. “This bridge has already been the catalyst for significant economic development in the City of Sweetwater. FIU and our surrounding community will benefit from this project for generations to come.”

"I believe this is what creative solutions to transportation challenges look like, and I will continue to support and incentivize these new ideas," Diaz-Balart said in FIU's since-deleted announcement.

This is a breaking story. This post will be updated.