Instagram
From Henry Flagler to Big Sugar, abusing the environment is a proud Florida pastime. The Sunshine State is a natural wonder, full of rare birds, beautiful fish, and people hellbent on killing every last living thing they encounter. Take, for instance, this week: On Monday, Capt. Mark "the Shark" Quartiano, the infamous Miami shark hunter New Times profiled in 2016, caught a group of would-be anglers torturing a shark by dragging it behind their boat until it died.

The anglers apparently sent Quartiano the video themselves, thinking he'd applaud their shark-abusing ways. Instead, Quartiano posted the clip online to shame them, and now Florida Fish and Wildlife officials confirm they've identified the fishermen in the video and are investigating the incident. (Because charges have not been filed yet, FWC declined to name the suspects; New Times is likewise not naming them. The abuser could not be reached for comment.)

But FWC officials have confirmed that one of the men involved has posted numerous photos of himself abusing other animals, including protected species of fish, multiple pelicans, and at least one dog. The photos suggest that the fisherman in question, who repeatedly bragged about being one of FWC's "Most Wanted" for violating state law, should likely have been apprehended long ago.

"CAN SOMEONE PLEASE TELL ME WTF IS GOING ON HERE ????" Quartiano wrote on Instagram in response to the shark clip, which has now gone viral. "JUST GOT THIS ON MY SENT FROM [names redacted]. FOR ONCE I MAY HAVE TO AGREE WITH @PETA. #WHODOESTHISSHIT #sowrong #notcool"

In the now-infamous clip, one of the men in question points at the struggling shark, and shouts, "Look! It's already almost dead." His cronies all laugh.

Interestingly, Mark "the Shark" Quartiano has himself sparred with conservation experts, who say sharks are and should be left to their own devices in the water. But Quartiano says the clip sickened him.

A cursory look at the suspect's Instagram account (which he has since made private) shows that the fisherman has spent quite a long time pestering, bothering, or outright abusing animals for fun. In multiple photos posted to his account, he repeatedly poses with trapped pelicans, draping them across his body, bragging that they're his "pets," and their wings out for : Instagram
He's also been photographed posing with banned fish: The suspect has posed alongside multiple Florida tarpon fish, which are a catch-and-release-only species. But in multiple shots, the fisherman bragged about pulling out of the and even taunted FWC officials.

"#HatersGonnaHate," he wrote, alongside a photo of  holding a tarpon through the gills. "#FWCsMostWanted." 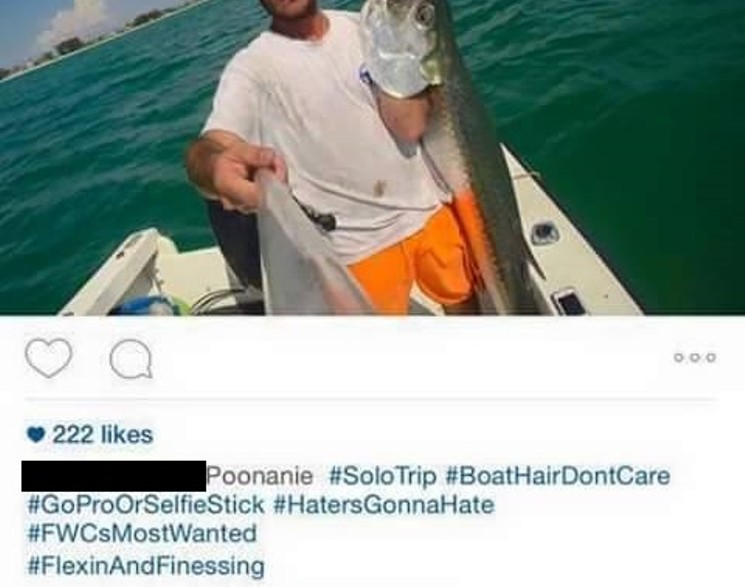 Instagram
In another shot, he and some friends boasted about nabbing a spotted eagle ray, another protected species. The group of four men in the shot bragged that the ray was "shark bait." 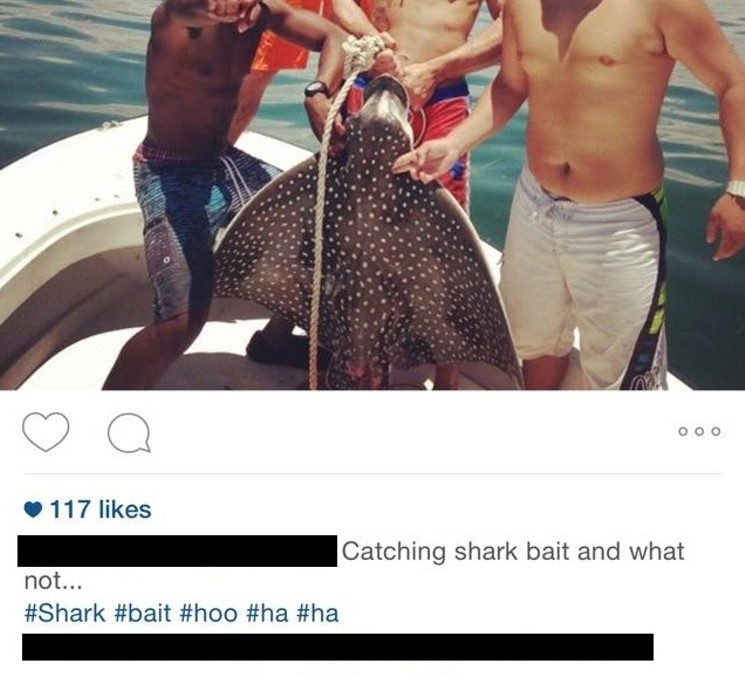 Instagram
But that's not the worst thing the suspect in question bragged about using as "shark bait." In fact, he was also photographed holding what he claimed was a dead dog — and bragged that the group of fishermen threw the dog into the water to attract sharks. 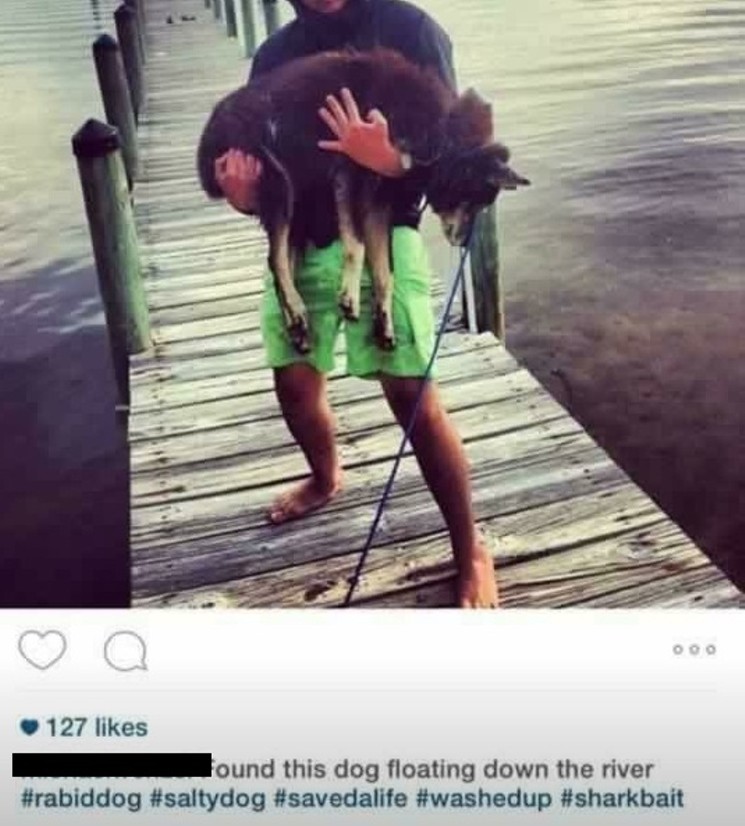 Instagram
Another friend commented later down: "Yeah, he was dead, sadly. But [name redacted] didn't let the meat go to waste."

FWC officials told New Times via email that the agency's enforcement bureau was able to quickly identify the people involved in the shark-dragging clip thanks to tips from citizens.

"It is too early to speculate as to what, if any, violations took place in this incident," FWC spokesperson Robert Klepper said via email. "However, the FWC would like to state that the lack of respect shown in this video for our precious natural resources is disheartening and disturbing, and is not representative of conservation-minded anglers around the world."

The FWC says citizens can report additional tips to the FWC’s Wildlife Alert Hotline at 888-404-3922 or [email protected].