See more photos of Guns N' Roses performance at Marlins Park here. Photo by George Martinez
They say rock 'n' roll is dead in 2017 — a shell of the cultural touchstone it once was, eclipsed by computer-generated sounds and gone by the wayside in a karmic retelling of rock's past usurpation of jazz as America's leading musical force. "They" haven't seen Slash play Eric Clapton's "Layla" solo with Axl Rose on piano in front of 35,000 rabid fans wearing Guns N' Roses T-shirts like compulsory uniforms.

After decades of public feuding and separate musical projects, "The Most Dangerous Band in the World" made up for lost time at Marlins Park with a blistering three-hour set of arena-ready hits, and asserted its place in rock's disciplic succession with tributes to many of the rock 'n' roll gods who came before (and after) them.

The first of these tributes came before GNR even hit the stage, as the offstage announcer introduced the band by shouting out the "Rhinestone Fucking Cowboy" Glen Campbell, whose death was announced just a few hours before the show.

Running onstage to the Looney Tunes theme song, the band opened with "It's So Easy," off the career-defining album Appetite for Destruction. The Not in This Lifetime tour marks the reunion of original members Axl Rose, Slash, and Duff McKagan in celebration of Appetite's 30th anniversary.


Guns N' Roses powered through the energetic set as sweat dripped off their bodies and Axl Rose changed T-shirt after T-shirt.

Guns N' Roses musicians can act as hard as they want — and they do. But at their core, they're crowd-pleasers. They know their fans want raining pyro, climbing and jumping off stage monitors, and extended guitar solos. They delivered handsomely to a melting audience that vocalized and tweeted their displeasure at the park's decision to keep the roof open without AC at the height of Miami summer. Sitting in the heat was bad, but GNR nevertheless powered through the energetic set as sweat dripped off their bodies and Axl Rose changed T-shirt after T-shirt. 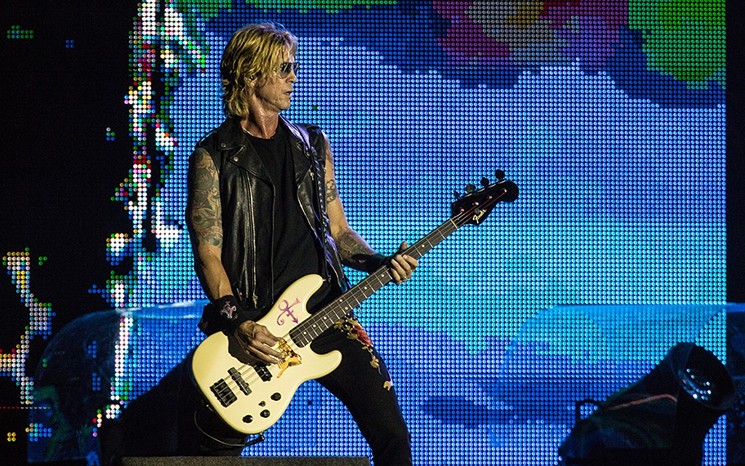 Photo by George Martinez
Rose faded in and out of view during the show, appearing when his voice was needed for songs like "Rocket Queen," "You Could Be Mine," "My Michelle," and the still-shocking "Used to Love Her." He bowed out during the many times Slash took center stage for extended solos, like his instrumental cover of Pink Floyd's "Wish You Were Here."

That was just one of many tributes, both subtle and overt, to the band's rock heroes. Slash closed out "Civil War" with a few licks of Jimi Hendrix's "Voodoo Child" and duck-walked across the stage like Chuck Berry, as  McKagan played in his Lemmy shirt and displayed a purple Prince symbol on his bass guitar.The most powerful tribute of the night came in the form of a moving cover of "Black Hole Sun," in memory of Soundgarden frontman and Slash and McKagan collaborator Chris Cornell. The rendition also allowed space for Rose to sing in his gorgeous lower register, which goes criminally underused in favor of his admittedly impressive sky-high range.

The show hit the three-hour mark during the band's four-song encore, which included "Patience" and "Paradise City." Fans had been clamoring for these songs from the stands throughout the show. Saving his only political statement for the end of the show, Axl Rose asked the crowd to sing along with vigor during "Knockin' On Heaven's Door," alluding to Donald Trump's terrifying "fire and fury" comments regarding possible nuclear war with North Korea. "This could be the last time we get to sing it," he said, before voicing his wish for cooler heads to prevail. After all, after a lifetime of public spats and outbursts, his band's twilight success is living proof of what can be accomplished when people set egos aside and finally get to work.
KEEP MIAMI NEW TIMES FREE... Since we started Miami New Times, it has been defined as the free, independent voice of Miami, and we'd like to keep it that way. With local media under siege, it's more important than ever for us to rally support behind funding our local journalism. You can help by participating in our "I Support" program, allowing us to keep offering readers access to our incisive coverage of local news, food and culture with no paywalls.
Make a one-time donation today for as little as $1.