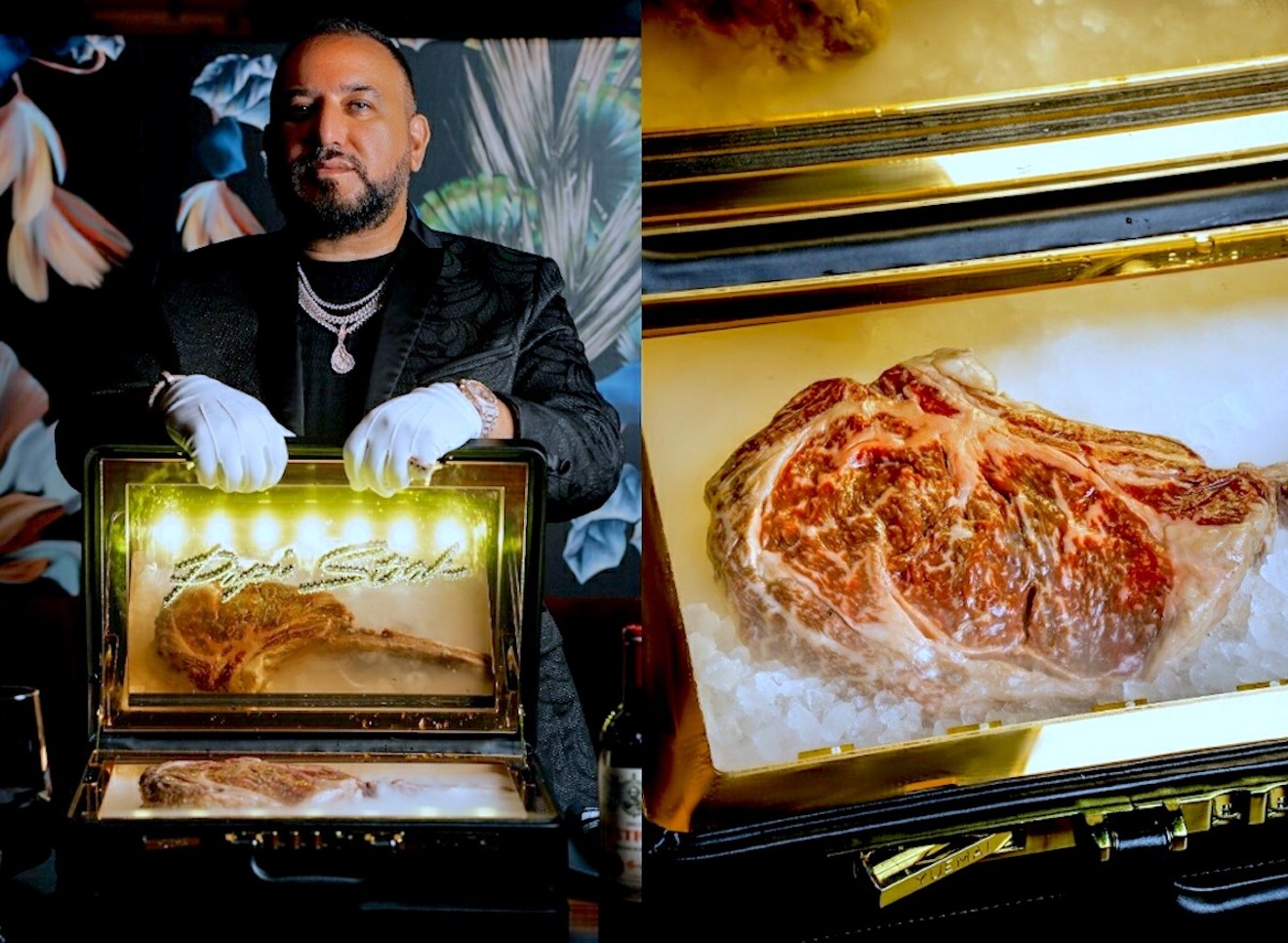 At David "Papi" Einhorn and David Grutman's Miami steakhouse, ordering the off-menu $1,000 tomahawk steak is literally a sight to behold. Not for its price tag, or even the beauty of the cut, but rather the 60-second show that comes with it.

It begins with an entrance song, which booms across the dimly illuminated space, commanding the attention of everyone in the dining room. From there, a troupe of well-appointed servers begin to dance and shout, not unlike a rowdy wedding party taking over the dance floor, as they guide the steak from kitchen to table.

When they arrive, a white-gloved presenter offers a tableside closeup of your dinner, delivered in a gold-lined briefcase. At your side — music still blaring, servers chanting, lasers dancing across the table — he opens the lid and a puff of smoke gives way to a glowing, bedazzled signature that reads (what else?) "Papi Steak."

A bed of ice sits the star of the show: a 55-ounce kosher cut of uncooked, bone-in Australian Wagyu. Before you can blink, a hot brand makes contact, sizzling as it sears the restaurant's name into the massive slab, releasing the aroma of melting fat.

Just like that, the show is over, the case is closed, and your dinner — enough to feed a table of six — is whisked back to the kitchen where it's cooked to order.

"I wanted to bring a cool, fun vibe to dinner," Einhorn tells New Times. "A social media-friendly eatery that offers both ambiance and entertainment along with amazing food."

For Einhorn, whose Miami Beach restaurant also bears his nickname, the Beef Case is a perfect example of his mission to offer guests a high-octane, ultra-indulgent night out. And that's exactly what the restaurateur manages to accomplish, whether it's the Wagyu pastrami presented beneath a smoke-filled glass, a jar of gold flakes that arrive with caviar service, or the tableside steak show inspired by the briefcase Marsellus Wallace sports in Quentin Tarantino’s Pulp Fiction.

"When my vendor first came to me with this steak, it was very expensive to buy, so I knew off the bat what I would have to charge just to make a small profit," Einhorn recalls. "The idea of the briefcase came together because you never know what's in that briefcase the entire movie — it was a Papi steak all along."

Einhorn's showy takes on the hospitality industry derive from his love of hosting. A New York native, the self-taught chef was known to throw parties at his midtown gallery, Avant.

But it was Einhorn's SoHo apartment where his hospitable nature was most evident. He was best known for grilling massive tomahawk steaks purchased from a kosher Brooklyn butcher. It wasn't unheard-of for him to be featured on various celebrities' Instagram stories as he cooked for the likes of Leonardo DiCaprio, Rihanna, and the Kardashians.

In Miami, Einhorn's hosting skills — and his culinary talent — caught the attention of Groot Hospitality founder David Grutman, who learned of Papi's grilling prowess via SnapChat.

"He would see everyone on social media posting about me grilling these crazy steaks," Einhorn explains. "During Art Basel, he asked me to grill for him. I shipped the steak, made the sauce, and it was hit. He christened it the 'Papi Steak' that night, then put it on the menu at Komodo, where it became the top-selling item."

Today, Papi Steak is ground zero for all things uber-luxurious. The restaurant, which Grutman and Einhorn opened in 2019, continues to draw a crowd of celebrities, musicians, sports icons, and influencers the likes of Maluma, David Beckham, Conor McGregor, and FoodGod.

But Einhorn assures you anyone can feel like a star in his restaurant.

"Even if your table doesn't order the Beef Case, the experience is the same," he promises. "My job is to curate an over-the-top guest experience to the full extent."
KEEP MIAMI NEW TIMES FREE... Since we started Miami New Times, it has been defined as the free, independent voice of Miami, and we'd like to keep it that way. With local media under siege, it's more important than ever for us to rally support behind funding our local journalism. You can help by participating in our "I Support" program, allowing us to keep offering readers access to our incisive coverage of local news, food and culture with no paywalls.
Make a one-time donation today for as little as $1.