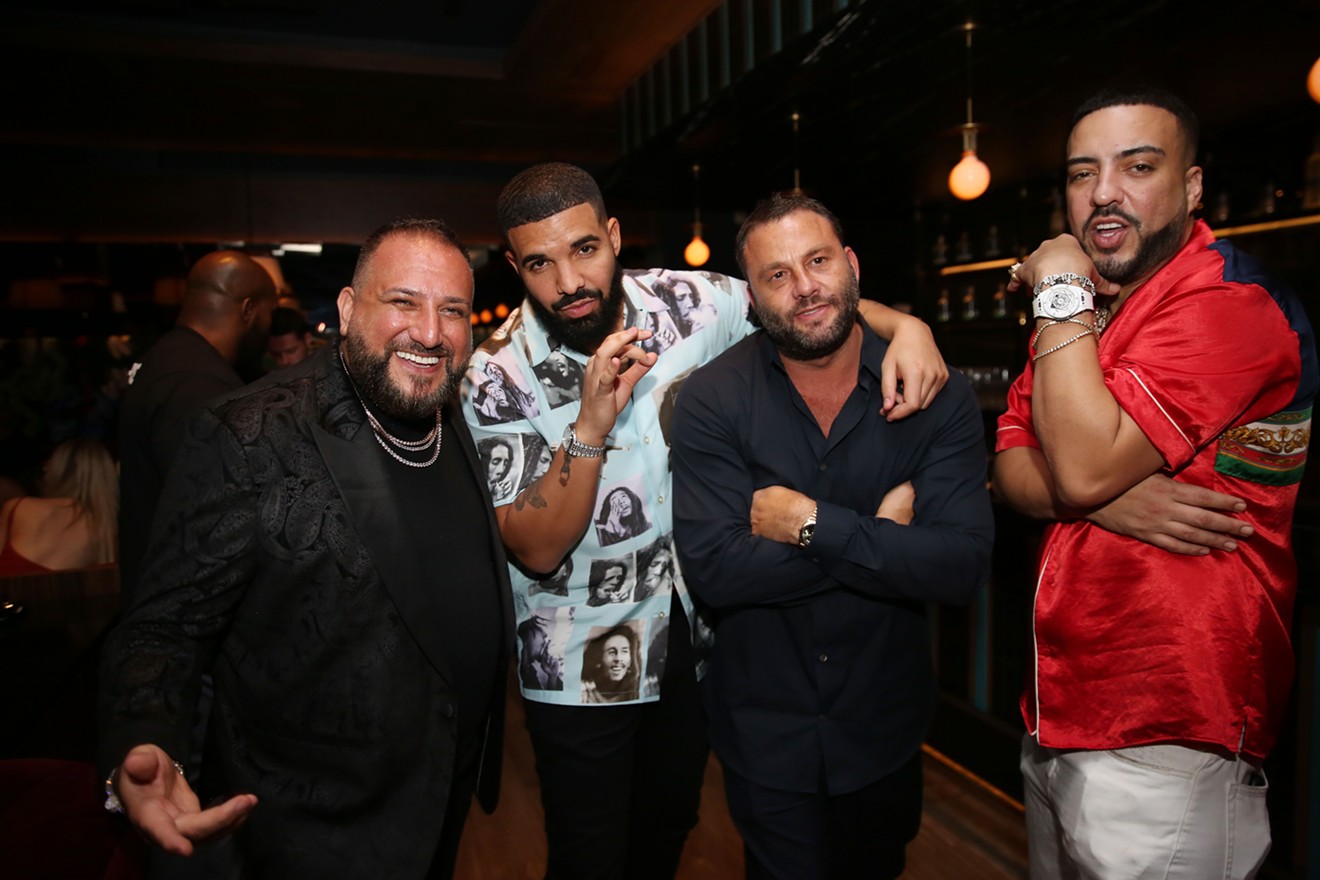 David Einhorn, Drake, David Grutman, and French Montana kibbutz at Papi Steak. WorldRedEye.com
If you haven't heard of David "Papi" Einhorn yet, you will once Papi Steak opens this Thursday, September 12, in South Beach.

The restaurant, part of David Grutman's ever-growing Groot Hospitality portfolio, will offer a panoply of kosher-style favorites such as latkes, Wagyu pastrami, and chicken schnitzel — and some non-kosher offerings like Maine lobster — along with a robust wine list and specialty cocktails. Other establishments under the Groot Hospitality umbrella include LIV, Story, Komodo, OTL, Planta, Swan, and Bar Bevy.

The star attraction on the menu, Grutman says, is the Papi steak, which comes with quite an origin story.

"Papi is a guest at all of our clubs. He's one of those guys with amazing charisma," Grutman says. A New York native, Einhorn is a frequent visitor to Miami Beach. Soon he became a regular at the Grutman house, where he could be found cooking steaks behind a grill. "He has these special kosher prime steaks flown in from New York, and they're amazing. He makes this secret, dairy-free sauce that's just unbelievable."

Grutman put the steak on the menu at Komodo, and people went wild for it. "It's taken off beyond any expectations. It became a phenomenon."

The steak, which sells for around $200 at Komodo, became so popular Grutman decided to open an entire restaurant based on Einhorn's recipes. “The Papi steak at Komodo is one of our best sellers. We’re introducing the next chapter of this dish with the opening of Papi Steak, a completely new concept featuring a variety of classics with a twist that only our team could create," Grutman says. 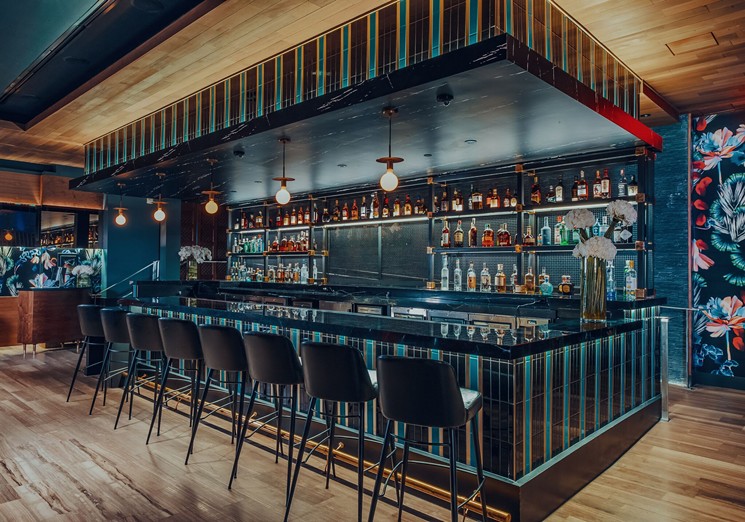 The bar at Papi Steak.
Seth Browarnik / WorldRedEye.com
The 93-seat restaurant promises to attract celebrities to nosh on kosher chicken schnitzel, macaroni and cheese, and a Wagyu pastrami that Grutman calls "the best thing you'll ever have." Already, A-listers such as Drake and French Montana have been spotted at the eatery's pre-opening events.

As with all Groot Hospitality establishments, the ambiance plays a major part in the experience. For Papi Steak, Grutman enlisted the aid of ICrave for the design, which features red velvet seating and hardwood tables. Candice Kaye was tasked with the custom-drawn wall finishes and smoky mirrors. "They perfectly capture the energy we wanted to create,” the nightlife impresario and restaurateur says.

A full menu with prices has not been released, but expect the signature kosher prime steak to cost around $200 and other cuts of meat and dishes to be in line with those at most Miami steakhouses. The Papi steak, by the way, will remain on Komodo's menu.

Papi Steak. 736 First St., Miami Beach; 305-800-7274; papisteak.com. Dinner Sunday through Wednesday 6 to 11 p.m., Thursday through Saturday 6 p.m. to midnight.
KEEP MIAMI NEW TIMES FREE... Since we started Miami New Times, it has been defined as the free, independent voice of Miami, and we'd like to keep it that way. With local media under siege, it's more important than ever for us to rally support behind funding our local journalism. You can help by participating in our "I Support" program, allowing us to keep offering readers access to our incisive coverage of local news, food and culture with no paywalls.
Make a one-time donation today for as little as $1.