The Ten Best Pizzas in Miami

Old Greg's pandemic-born pies are a favorite with Miami locals. Photo by Nicole Danna
Miami might not have a celebrated regional style of pizza that rivals New York thin-crust or Chicago deep-dish, but the Magic City holds its own when it comes to producing palate-pleasing pies.

With a crisp golden crust, an even layer of homemade sauce, melted cheese dripping off the sides, and the freshest toppings, pizza is one of humanity's greatest gifts to itself.

Just as this democratic food has changed our diet over the years, so too has the local pizza landscape shifted. Newcomers have amassed a following through their innovative creations, while established joints endeavor to maintain their reign with no-fail recipes. Bottom line: No matter what you fancy, you can find a pie that fits you. 5600 Biscayne Blvd., Miami
305-762-5751
andiamopizzamiami.com
Don’t let the fact that this pizza joint was once a tire shop distract you. The focus at Andiamo is on the pie: more than 30 gourmet brick-oven pizzas. Take in the view of bustling Biscayne Boulevard as you dine alfresco on a breezy patio and enjoy favorites such as the "New Yorker," made with fresh mozzarella, tomato sauce, Parmesan, extra-virgin olive oil, and fresh basil; or the "Godfather," a meat lover’s dream topped with sausage, pepperoni, meatballs, and mushrooms. The "Sunday Pie" is also worth a try for its seamless blend of sweet, spicy, and meaty flavors courtesy of tomato sauce, pepperoncini, mozzarella, ricotta, Parmesan, and basil. 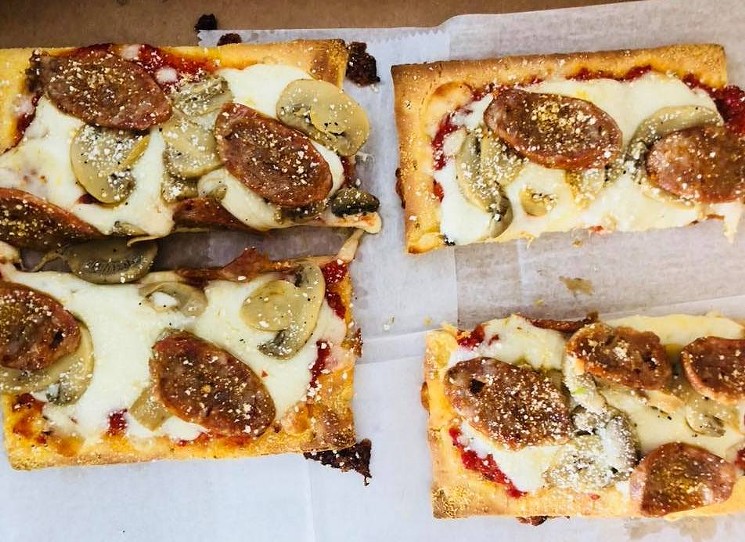 9118 Bird Rd., Miami
305-221-0221
frankiespizzaonline.com
Frankie's dining room is decorated with a worn Formica counter, faded sports posters, and a rattling cooler filled with soft drinks. Yes, there's no beer or booze. But honestly, who cares? Frankie's has some of the best pizza around, and that's why you're here. It's all about the crust at Frankie's: crisp on the bottom, slightly chewy at the center, and tasting of fresh-baked bread. Cheese and toppings are generous without being overindulgent, and a bargain —  personal pies start at five bucks. See why Frankie's has been in business since 1955: It remains a classic, no-fuss, mom-and-pop shop dishing up its famed square-cut pies at rock-bottom prices.

5833 Ponce de Leon Blvd., Coral Gables
305-666-5931
miamisbestpizza.com
When a pizza restaurant has been around for five decades, you know there's something in the sauce. That's the deal at Miami's Best Pizza, a Coral Gables institution that's been slinging its beloved pies since 1970. The secret here isn't merely in the sauce, however, but also in the kitchen's dough, which is hand-rolled daily, its butcher-cut meat toppings, and its super-friendly service. The menu also boasts a number of equally quintessential pizza joint-proper adjacents, including garlic rolls and Miami-style heroes.

The star-shaped pizza like this new Star Beckham pie from Mister 0-1 is what sets this pizzeria apart from all the rest.
Photo courtesy of Mister 0-1

Multiple area locations, including:
2315 N. Miami Ave., Miami
786-991-9343
mistero1.com
Owner and master pizzaiolo Renato Viola uses only the freshest ingredients and premium-quality cheeses (vegan cheese is available for an additional charge) to top Mister O1's thin-crust pies. While there are more than 15 options to choose from, the signature pie remains the 13-inch "Star Luca," named for its star-shaped points that form perfect little dough pockets filled with creamy ricotta cheese and a center layered with the house Italian tomato sauce along with mozzarella and spicy salami. That star is what sets Mister O1 apart from other local pizzerias — and what led to the pizzeria's expansion to Madrid, Saudi Arabia, and Naples (Florida, that is). 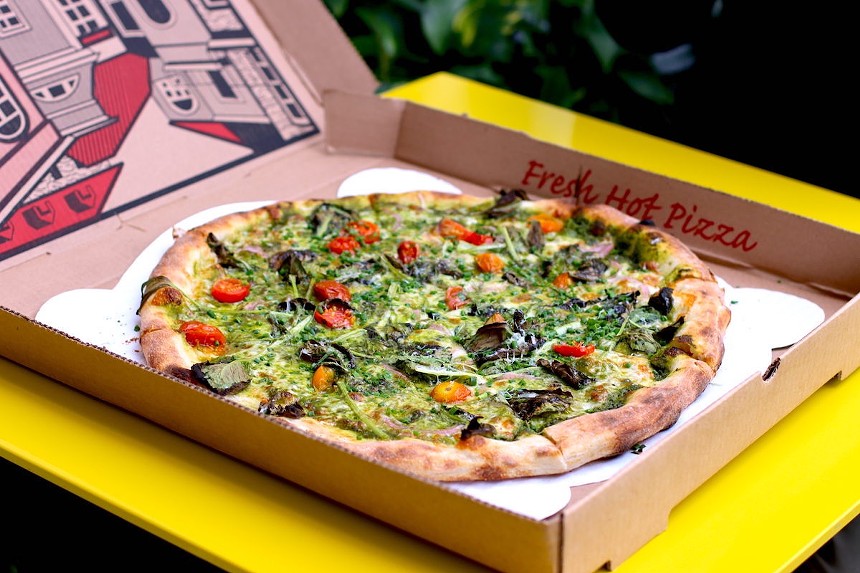 Old Greg's went from pandemic pop-up to serving one of Miami's favorites pies from a new brick-and-mortar location.
Photo by Nicole Danna

3620 NE Second Ave., Miami
866-653-4734
oldgregspizza.com
Miami pizza lovers flock to Old Greg's for a taste of its sourdough pies. Regulars have come to expect the wait for Old Greg's, named after the sourdough starter newly minted restaurateur Greg Tetzner and his girlfriend, Jackie Richie, affectionately dubbed "Old Greg." What began as a pandemic pop-up is now a brick-and-mortar shop that offers up Tetzner's famous pies and slices. For a crust that's nearly an inch thick, it's notably light, boasting a well-toasted bottom and covered with a slick of tomato and cheese that caramelizes into those extra-crisp patches that beg to be eaten first. While it's never a bad idea to order the plain pie, don't overlook the "O.G. Roni." The list of side dishes includes breadsticks with garlic-hollandaise dipping sauce, meatballs, and massive breaded chicken wings. Those, and desserts like the olive oil-based lemon poppyseed tres leches, gussied up with Sicilian pistachio, fennel pollen, and stracciatella-rich cream, make this more than your average pizza pit stop.

6425 Biscayne Blvd., Miami
786-907-4000
munaciello-miami.com
With roots in Florence, Italy, O'Munaciello in Miami's MiMo District is the stateside outpost of the original pizzeria built in an annex of the 17th-century Florentine Santo Spirito Basilica. Owner Valentina Borgogni's goal was to re-create the feel of the Italian original. That includes the restaurant's master pizza chef, Carmine Candito, who grew up working at his family's pizza shop in Naples. Candito's pies — nearly two dozen to choose from — arrive with crisp edges and doughy centers. Try the "Vesuvio," a breathtaking marriage of mozzarella, cherry tomatoes, black truffles, and burrata. Pies start at $12, and any selection can be prepared with the restaurant's signature black dough made with activated charcoal. The pizza arrives with an eye-catching charcoal hue and is said to aid digestion — and even treat hangovers. The black crust imparts a smoky taste but doesn't overwhelm the other flavors.

Square Pie City by chef Jeremiah Bullfrog is making some of the city's best Detroit-style pizza.
Photo by Nicole Danna

1601 Drexel Ave., Miami Beach (in Time Out Market)
786-753-5388
squarepiecitymiami.com
A lifelong Miami resident and former private chef for rapper Rick Ross, Miami chef Jeremiah Bullfrog has done it all — from working in some of the most exalted restaurants in the world, including elBulli in Spain and Noma in Copenhagen, to towing one of Miami's first food trucks, Gastropod. The chef also became known for his Miami-based food events, Duck Duck Goose and P.I.G., which bring together local and national chefs to turn out dishes focusing on fowl and pork, respectively. Now, Bullfrog is creating some of the Magic City's best pizza at Square Pie City, where he delivers his own riff on the deep-dish square pie. Pies are available in half or whole pans and prepared with Bullfrog's 72-hour, double-fermented dough, which bakes up super-crisp. Like most Detroit pies, it's topped with cheese before being smothered in a layer of sauce. Two varieties offer takes on both red and white pies, with the option for vegan/gluten-free substitutes. Standouts include the "All White E’rrything," topped with mozzarella, ricotta, Parmesan, and roasted garlic; and the "Many Magical Mushrooms," with cremini mushrooms, porcini dust, mozzarella, asiago, and garlic; and the "Red in the Head, Fire in the Bed," made with spicy Calabrian chilies, chili-infused oil, mozzarella, and provolone.

12101 Biscayne Blvd., North Miami
305-891-0202
For more than 40 years, this longtime North Miami staple is best known for serving up the quintessential "New York" slice, priced at $3.75. While the northern Biscayne corridor is mostly quiet during the late-night hours, Steve's is the sole exception. Here, dining in is your best option. Why? The place is open until 3 a.m. on the weekdays (4 a.m. on weekends), where Formica tables riddled with graffiti present the perfect spot to slurp up these large, two-plate-worthy gooey cheesy slices. An extra-large 18" cheese pizza will run you $18.95 and will be hot and ready in 20 minutes, an airtight layer of mozzarella cheese blanketing a thin crust with a red sauce bursting with tomato flavor in between. Toppings? Unnecessary. But if you insist, get the thin-sliced meatball. If you can't decide, specialty pies include a meat lover's, a sauce-free white pizza, and a veggie.
KEEP MIAMI NEW TIMES FREE... Since we started Miami New Times, it has been defined as the free, independent voice of Miami, and we'd like to keep it that way. With local media under siege, it's more important than ever for us to rally support behind funding our local journalism. You can help by participating in our "I Support" program, allowing us to keep offering readers access to our incisive coverage of local news, food and culture with no paywalls.
Make a one-time donation today for as little as $1.