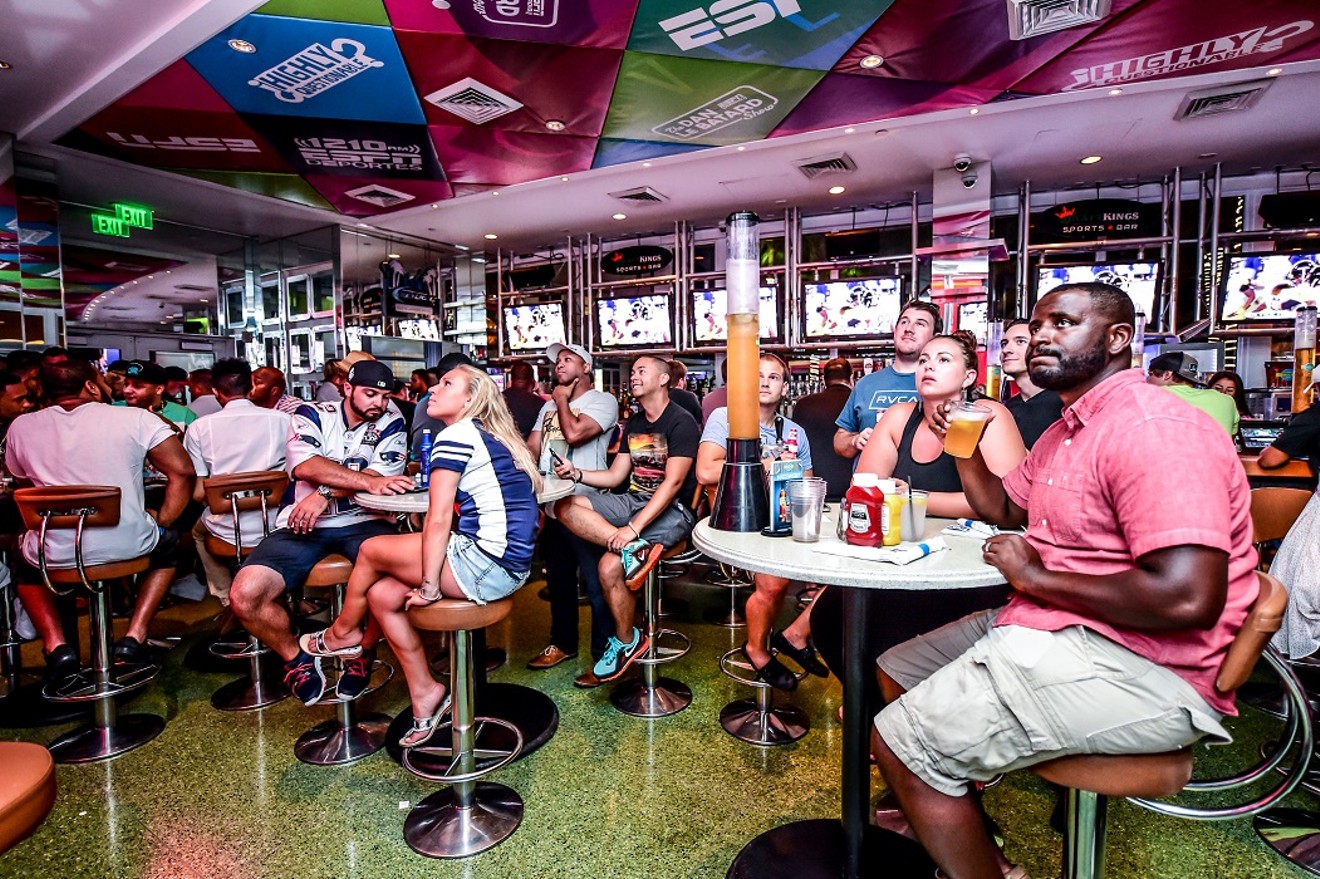 Drinks and football at the Clevelander. Courtesy of Clevelander
In the past few years, the craft cocktail craze has inspired a much-needed wave of new bars in Miami Beach. Sure, overpriced and overhyped neon-blue slushy drinks containing cheap vodka are inevitable. But today, Collins Avenue brims with a new generation of savvy, classy, and smart watering holes.

From decades-long mainstays such as Mac's Club Deuce to more modern concepts like Broken Shaker, these are Miami Beach's ten best bars. 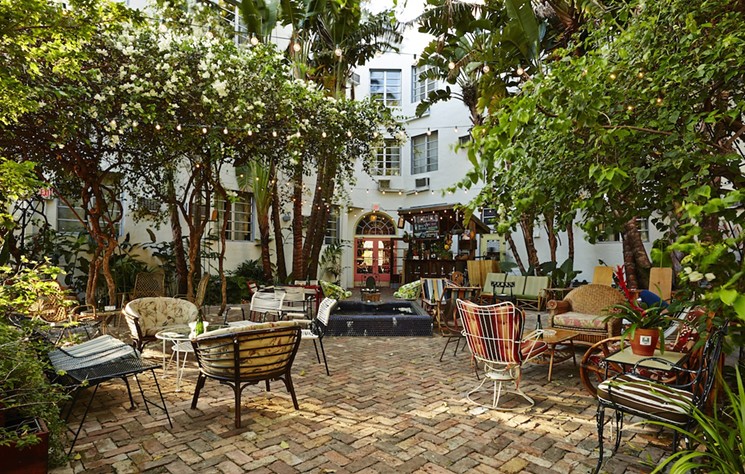 2727 Indian Creek Dr., Miami Beach
786-325-8974
freehandhotels.com
What began as a pop-up bar in 2012 has flourished into one of the most popular spots on the Beach. At the Freehand, this backyard oasis, equipped with twinkling lights, Ping-Pong tables, and mismatched patio furniture, offers a roster of cocktails ($12 and up) that change according to the season and available fresh ingredients. Curb your hunger with bites like Korean chicken tenders or a Cuban sandwich ($14). Created by Bar Lab's Gabriel Orta and Elad Zvi, Broken Shaker has racked up a number of awards, including Best American Hotel Bar at Tales of the Cocktail's Spirited Awards. 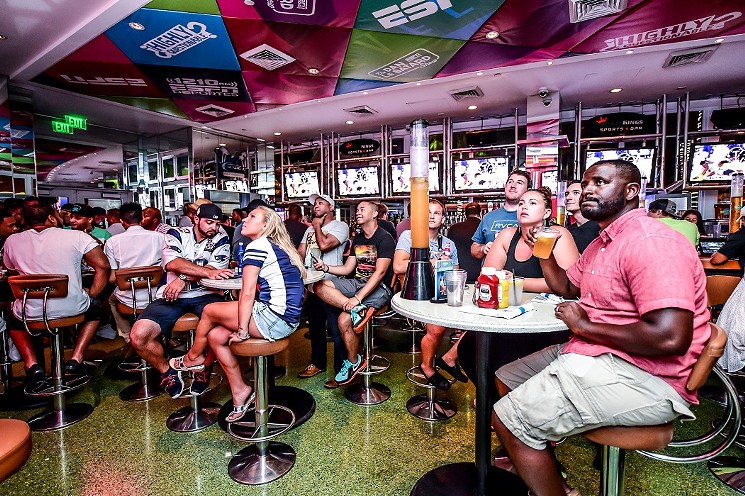 1020 Ocean Dr., Miami Beach
305-532-4006
clevelander.com
If you want your burgers and beer served with a side of revelry, the Clevelander is your spot. There's really no other place where you can splash in a pool, hang out with body-painted women, and drink $5 Jack Daniel's shots chased by $5 bottles of beer (during football games). Oh, that's right — football. There's that too. Watch the big game on a 20-foot LED screen and more than 40 other TV sets throughout the property. 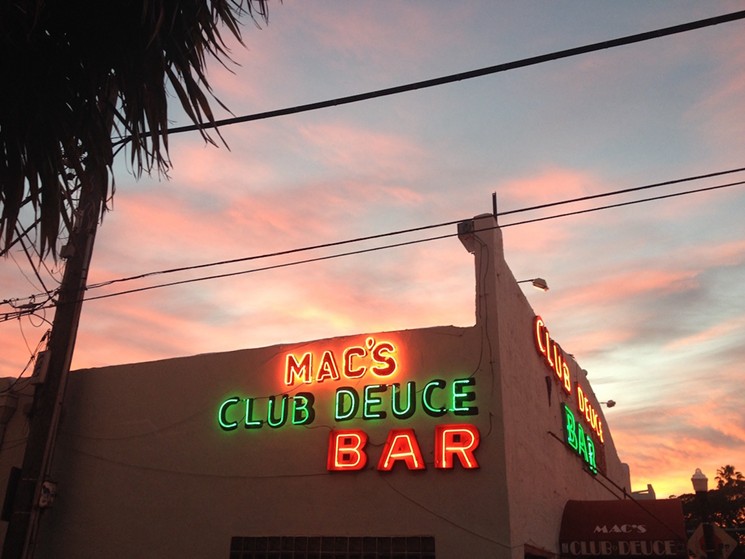 222 14th St., Miami Beach
305-531-6200
macsclubdeuce.com
One of the oldest and few remaining dive bars in Miami Beach, Mac's Club Deuce is the neighborhood's definitive spot to drink, play the jukebox, and shoot some pool. Not much has changed inside this legendary establishment, which opened in 1964. There's a selection of craft and domestic beer ($5 to $6) and enough liquor to satisfy even the pickiest bar fly. From 8 a.m. to 7 p.m., all drinks are two-for-one. After that, the bar stays open another ten hours for cheap drinks and spontaneous misadventures. Anthony Bourdain, who was a frequent visitor, loved the Deuce's retro vibe. The dark bar is also a hangout for celebrities seeking refuge from paparazzi, so be chill if you spot an A-lister holding a PBR. 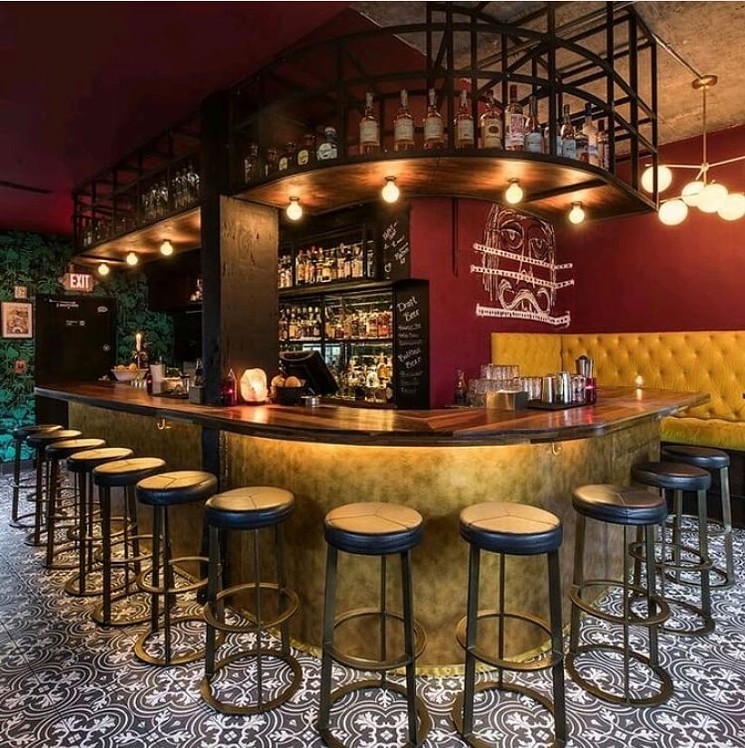 418 Meridian Ave., Miami Beach
305-763-8934
minibarmiami.com
This South of Fifth watering hole has quickly become a favorite among locals and visitors looking for a laid-back vibe. True to its name, Minibar is a small hangout that invites conversation in the courtyard, a chat with the bartenders, or a nightcap. Two favorite cocktails — South Beach Z Pack ($13) and Pucker Up ($13) — have remained on the menu from the beginning; they're served in Minibar's signature tiny liquor bottles like the ones found in hotel minibars. 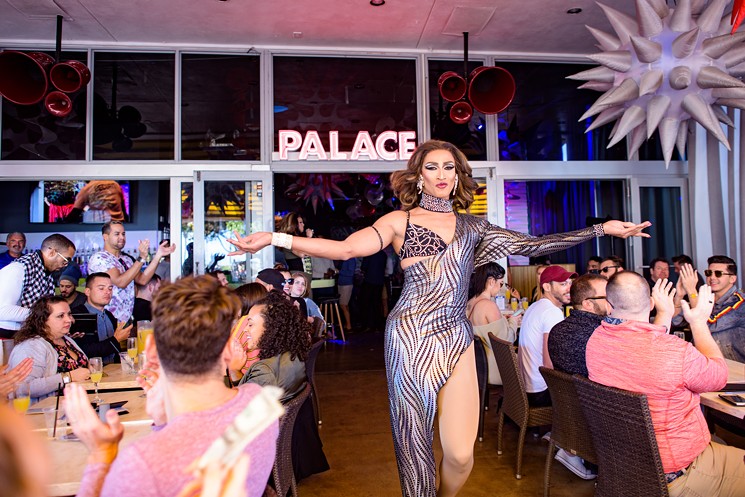 1052 Ocean Dr., Miami Beach
305-531-7234
palacesouthbeach.com
Stop by the Palace for a very South Beach experience. The gay-friendly restaurant and bar puts on drag shows every Friday, Saturday, and Sunday and offers its famous Sunday drag brunch. Otherwise, know that the venue offers two bars: one indoors and designed for nighttime use, and the other semioutdoors. There's a patio with dining tables. Entertaining drag queens make the service extra-friendly. Call ahead for the drag show during Sunday brunch. 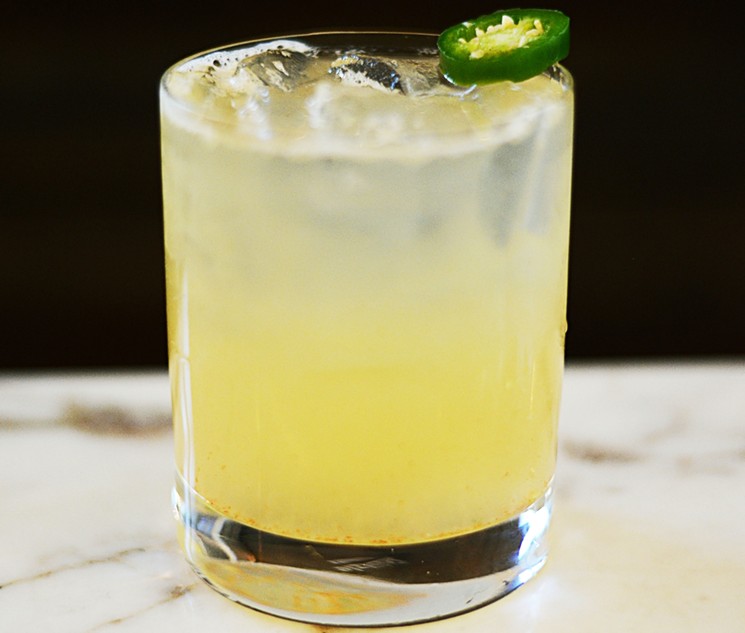 1690 Collins Ave., Miami Beach
305-673-0199
galehotel.com/nightlife
Inside the Gale Hotel hides the Regent Cocktail Club, a 1940s-era speakeasy in the middle of tourist-laden South Beach. The scene is set with dim lights, antiqued furniture, old-timey champagne glasses, and a comprehensive cocktail menu created by Bar Lab. Cocktails are classic affairs, meant to be savored rather than guzzled.  In short, the Regent does what every neo-bar in town has been trying to do for the past five years: make the past hip again. 100 Collins Ave., Miami Beach
786-275-6488
scapegoatsobe.com
For some of the cheapest drinks in town, head to the ScapeGoat, where domestic bottles and tall-boy cans start at only $5. Patrons who work in the service industry get their own selection of even cheaper drinks, such as $3 Jameson shots and $3 beers all day. Whether you're looking for a few brews or tasty cocktails, the ScapeGoat offers wallet-friendly alcoholic beverages no matter what time you visit. 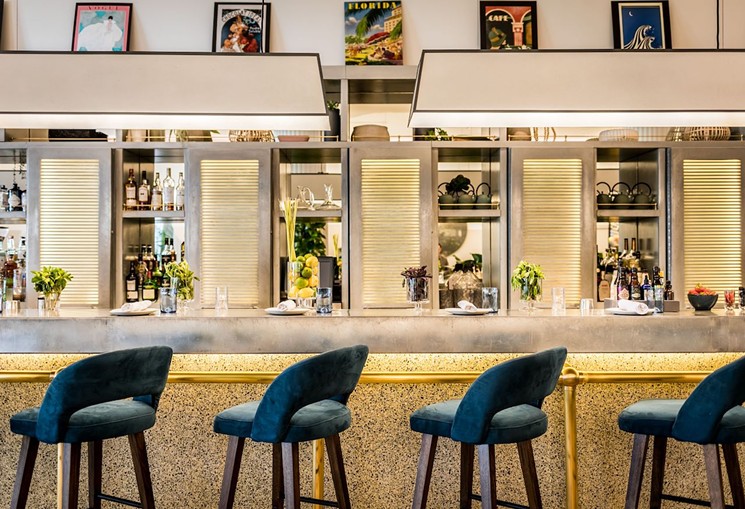 Sling Bar shares the lobby of the Como Hotel in Miami Beach with the Traymore.
Photo by Gather + Grow Media 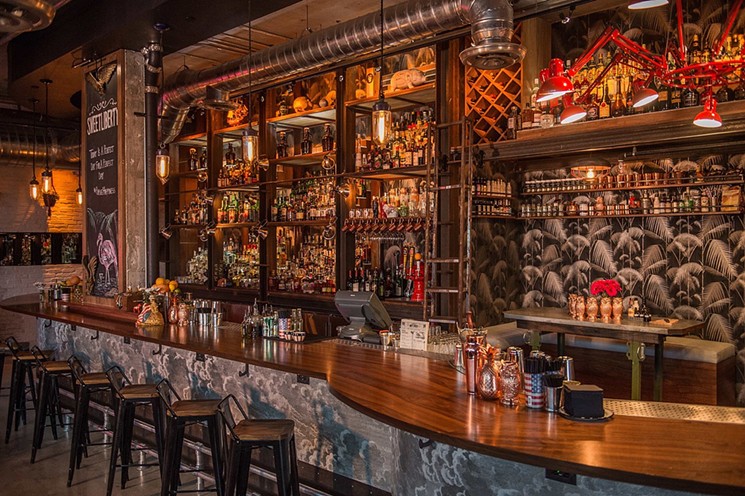 The bar at Sweet Liberty.
Photo by Seth Browarnik / WorldRedEye.com

237-B 20th St., Miami Beach
305-763-8217
mysweetliberty.com
World-class bartender John Lermayer was a cofounder of this bar that reminds guests to "pursue happiness" with the phrase spelled out in pink neon. Here, expect well-made drinks and solid bar food in a relaxed setting. Cocktails ($12 to $13) include the She Said Yes, made with gin, lemon, and raspberry, and the Basic Bitch, containing Absolut Elyx vodka, St-Germain elderflower liqueur, prosecco, strawberry, and lemon. James Beard-winning chef Michelle Bernstein created the food menu, which includes tater tots drizzled with Japanese mayonnaise, vegetable falafel poppers, beet-juice-pickled deviled eggs, and fried chicken with honey and hot sauce. Since opening in 2015, the bar has gained recognition from Tales of the Cocktail's Spirited Awards as Best American High-Volume Cocktail Bar (a bar with a seating capacity of at least 100) and was the only Florida bar to make Playboy's 2016 roundup of the best bars in America. 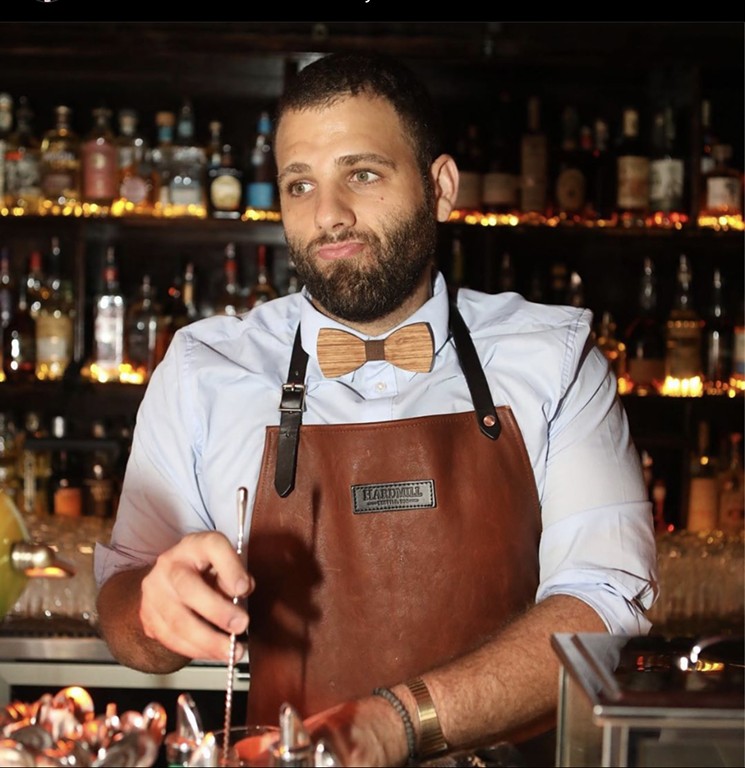 1120 Collins Ave., Miami Beach
305-674-7800
swizzlerumbardrinkery.com
The management team behind the much-missed Employees Only Miami is behind this intimate bar that pays homage to the beloved spirit of the Caribbean: rum. The bar offers about 150 varieties of rum, meant to be sipped or featured in cocktails. Swizzle offers classics such as a rum Manhattan and creative cocktails like the El Presidente, made with rum, pomegranate, molasses, and Angostura bitters. A small kitchen serves bar fare such as chicken wings and Cuban sandwiches.
KEEP MIAMI NEW TIMES FREE... Since we started Miami New Times, it has been defined as the free, independent voice of Miami, and we'd like to keep it that way. With local media under siege, it's more important than ever for us to rally support behind funding our local journalism. You can help by participating in our "I Support" program, allowing us to keep offering readers access to our incisive coverage of local news, food and culture with no paywalls.
Make a one-time donation today for as little as $1.