Miami is known for many great foods, but so far, ramen hasn't been a strong suit. That's about to change, because the folks behind Toni's Sushi Bar in Miami Beach and Shokudo in Buena Vista are getting ready to debut a ramen shop in Miami Beach.

Open now as a pop-up in Sunset Harbour near Panther Coffee and Purdy Lounge, Shimuja is a temporary expansion of chef Keiichi Maemura's south Broward ramen shop. The owners hope to have a permanent presence on the Beach, however, by taking over the former Macaluso's space off Alton Road.

Maemura has already devised a signature bowl of ramen specially for the Beach: salmon ramen. The Shimuja Miami Beach special ($30) uses "select fillets of both king salmon and Scottish salmon" in a broth "created over several days of simmering fillets, head, and bones with TLC."

“With every store, we try to feature a special, signature ramen,” managing partner Yoko Takarada says. “We’ve never had a fish ramen before.”

A press release promises that the soup — served with thin hoso-men noodles and topped with a Kagoshima fish ball, salmon slices, minced shiso leaf, a "precisely boiled" egg, mitsuba, and scallions — will be "almost too beautiful to eat." 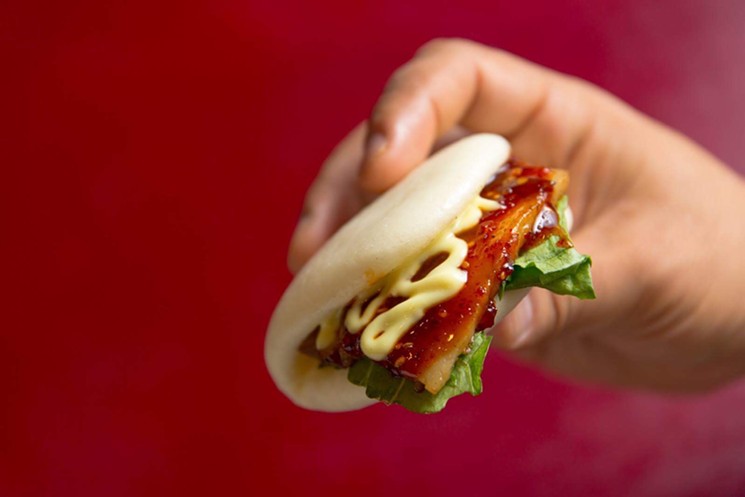 Shimuja's menu also includes pork buns and other appetizers.
Photo courtesy of Shimuja
Of course, not everyone is willing to pay $30 for even the finest bowl of noodle soup. Luckily, Shimuja's famed tonkotsu, in regular ($16) or spicy ($18), will also be on boil at the pop-up, and an even more interesting option for proud Floridians will also be available: key lime ramen ($18), made from a shoyu broth accented with lime juice for a pleasant tartness.

“It’s really refreshing. It’s light," Takarada says. "All of our ramen soups are special in one way or another, but this is a Florida specialty item. There's no access to key lime juice [in Japan].”

Appetizers such as pork buns ($9), takoyaki ($9), and fried squid kushiage (three for $7) are also available, as is a drink menu including wine, beer, and premium sake.

Shimuja is the brainchild of Maemura, who began slinging ramen after leaving a career in finance in Fukuoka, on the southwestern Japanese island of Kyushu. After working for the celebrated chain Ippudo, he struck out on his own, opening Shimuja in his home city of Kagoshima. He soon decided he wanted to open a shop near Miami, Kagoshima's sister city, and teamed up with Takarada to open Shimuja's first location in Southwest Ranches to excellent reviews.

Takarada says if the Miami Beach location is successful, they might look into further expansion. Until then, itadakimasu!

Shimuja Miami Beach. 1766 Bay Rd., Miami Beach; shimuja.com. Daily noon to 11 p.m.
KEEP MIAMI NEW TIMES FREE... Since we started Miami New Times, it has been defined as the free, independent voice of Miami, and we'd like to keep it that way. With local media under siege, it's more important than ever for us to rally support behind funding our local journalism. You can help by participating in our "I Support" program, allowing us to keep offering readers access to our incisive coverage of local news, food and culture with no paywalls.
Make a one-time donation today for as little as $1.