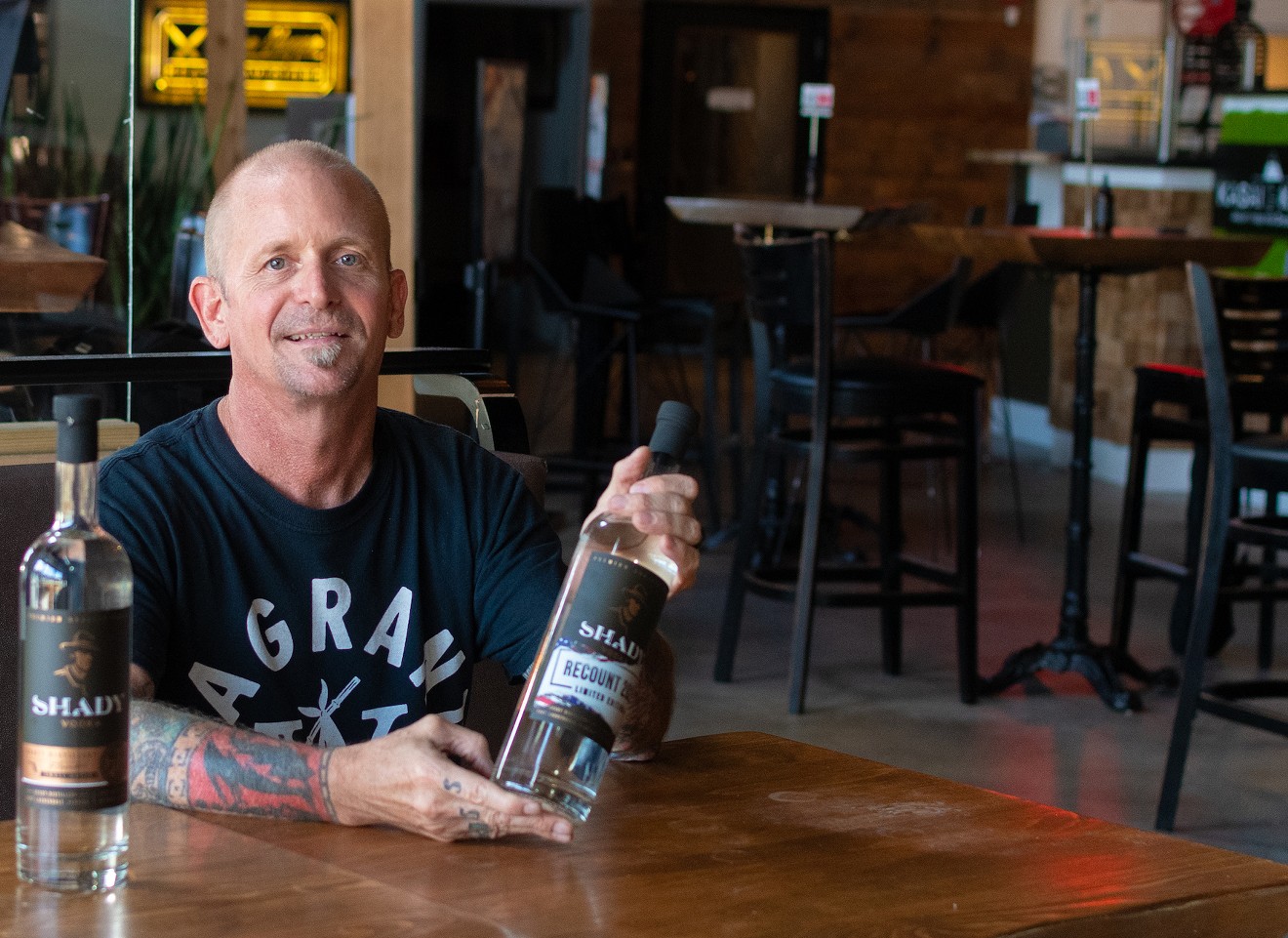 A homebrewer for more than 30 years, VerPlanck began making hard cider in the late 1970s. After fermenting everything from beer to wine, he turned his attention to spirit distillation in 2000. In 2019, he founded a distilling brand and distillery-consulting business, Vagrant Distiller, working on projects that took him across the U.S., Caribbean, Mexico, and Central America.

Since then, VerPlanck has assisted in the creation of many spirits with an enduring passion for rum. A Southern California native, he relocated to Florida in 2019 to open Shady Distillery.

"This has long been a passion project of mine with a goal to create a local movement away from large faceless production of spirits to one focused on small, handcrafted creations using superior ingredients,” VerPlanck tells New Times. “We are very excited to finally be able to open the Shady Distillery, launch the first run of our many locally made, handcrafted spirits, and use years of experience behind Old-World craft distilling techniques."

The 20,000-square-foot space houses a 1,000-liter still as well as three 500-gallon fermenters for creating small-batch, artisan versions of vodka, rum, and bourbon.

VerPlanck prides himself on not cutting corners or mass-producing his products, using a blend of Old-World and New-World distilling techniques to create small-batch spirits.

"Distilling is a very old science, and not a lot has changed in many decades, but I always embrace technology and love to fine-tune processes," VerPlanck elaborates. "There is almost always room for improvement on something, and I strive to find that solution."

The first batch of Shady vodka and Shady's limited-edition Recount 2020 vodka are for sale in the Fort Lauderdale tasting room. The production and distribution of the distillery’s 12 Mile Rum and bourbon are soon to follow.

Made in small batches, the vodka is seven-times distilled from corn and is naturally gluten- and carb-free with no sweeteners or additives. The ten-time proprietary finishing filtration process creates what VerPlanck describes as a smooth, 80-proof vodka that is best served straight.

Moving forward, the distillery will produce Shady 12 Mile rum with both unaged white- and dark-rum versions, as well as barrel-aged, spiced, and cinnamon rums. In the future, look for several limited botanical releases including a single barrel reserve rum, a bourbon, and a single-malt whisky.

“I make all styles of rum, from nice light, crisp unnamed white rum to very heavy-bodied rum, all made from molasses. Also rums from fresh-pressed cane juice that resemble the Old-World-style rhums of the French Caribbean, Haiti, and Central America," VerPlanck says.

These rums pay homage to Florida's 12-mile "rum line" — the edge of international waters during Prohibition when rum runners smuggled booze from the Bahamas to the state's southern coastline. Large boats would sit on the line three miles offshore, selling rum to crews on small boats that could outrun the U.S. Coast Guard. To combat the issue, Congress extended the line to 12 miles.

Beginning this month, guests can learn the basics of distilling and get a taste for the spirits made at Shady Distillery, via its dedicated tasting experience. The guided tour shares the concepts behind the art of fermenting. The tour is available weekly on Thursday and Friday evenings at both 5:30 and 7 p.m. for $20 per person.

Shady Distillery. 616 NW Second Ave., Fort Lauderdale; 954-869-4170; shadydistillery.com.
KEEP MIAMI NEW TIMES FREE... Since we started Miami New Times, it has been defined as the free, independent voice of Miami, and we'd like to keep it that way. With local media under siege, it's more important than ever for us to rally support behind funding our local journalism. You can help by participating in our "I Support" program, allowing us to keep offering readers access to our incisive coverage of local news, food and culture with no paywalls.
Make a one-time donation today for as little as $1.