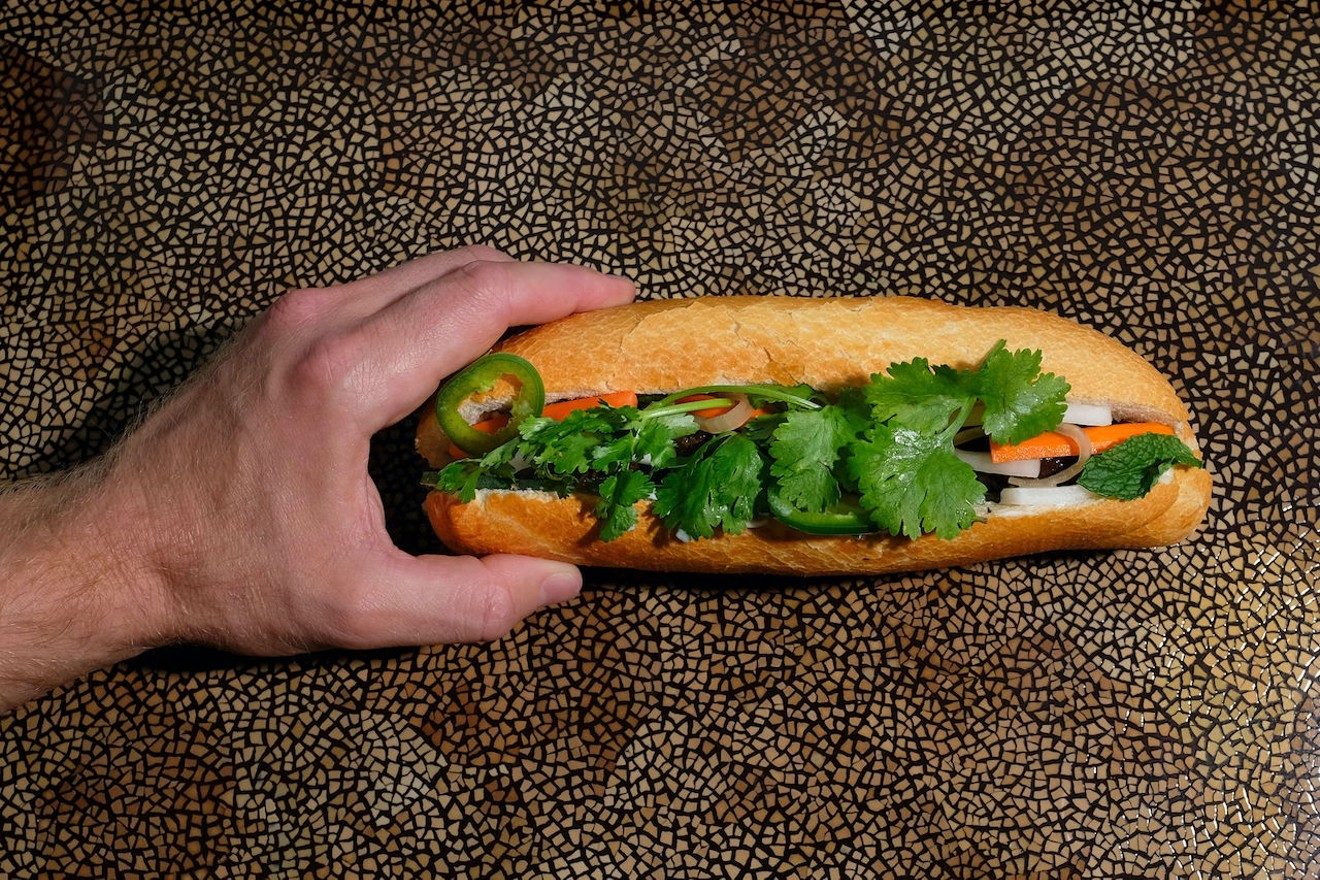 Behold the Benh Mi bánh mì. Photo by FujifilmGirl
Last May, as the coronavirus lockdown wore on endlessly, Benjamin Murray was looking for a new revenue stream, having been furloughed from his job as chef de cuisine at Pao by Paul Qui.

Confined to his apartment downtown, the 34-year-old chef set his eyes on turning his love affair with the Vietnamese bánh mì sandwich into a passion project.

After a few weeks spent testing recipes, Murray launched Behn Mi out of his home kitchen, offering a menu of meal kits designed for easy at-home assembly and priced at $20 to $40.

"Basically, the first week was just a bunch of Miami chefs and bloggers buying the sandwiches," Murray tells New Times. "But it got to a point where I was selling out days in advance. My home fridge was like a storage center."

In November, Murray reconnected with 33-year-old Michael Kaplan, a friend from culinary school. Based in New York City, Kaplan owns coffee shops as well as Two Forks, a fast-food, build-your-own restaurant with an emphasis on slow-roasted meats. Together, the duo set eyes on expanding Murray's homebred concept into brick and mortar.

"I knew I was going back to Pao eventually, but I also wanted to do something else," explains Murray, who started working at the Asian restaurant in the Faena Hotel in Miami Beach in 2016.

When Benh Mi debuts on Española Way in February, it will be open for breakfast, lunch, dinner, and late-night dining. Designed by Cindy Kam, the 800-square-foot restaurant will connect directly to the lobby of Esmé Miami Beach, a new boutique hotel that's also slated soon to open soon, and will feature indoor/outdoor seating with a standing bar.

"The inspiration for the restaurant's design is really about taking elements of Vietnam, Southeast Asia, and 1980s pop culture and looking at them through a current Miami lens,” Kaplan says.

At Benh Mi, sandwiches will be served on Bettant Bakery bread and take several forms, from lemongrass meatball to herb and roasted pork to char siu mushroom, and will range in price from $10 to $13.

"We'll be rolling out new variations of the sandwich and we are looking to do pop-ups to have other chefs come in and serve their own creations," Murray says.

The menu will also contain a selection of light dishes, including a "waterfall beef" salad tossed with skirt steak, and a green papaya salad with mangos, green beans, and toasted peanuts. Murray's crunchy spicy chicken tenders will be served with a choice of yuzu-kosho ranch dressing, roasted banana ketchup, or tamarind barbecue dipping sauces.

The restaurant will serve Vietnamese coffee and tea and specialty drinks including purple ube latte made with Japanese sweet potato.

Kaplan says Benh Mi will be first venture his and Murray's new company, Arch Hospitality, and that there's more to come, including a restaurant in Edgewater.

"I think Miami is certainly grown up in the last few years with all these places by local chefs like Michael Beltran and Jeremy Ford doing an amazing job at making the city better through food and beverage," Murray says. "But now we're facing a difficult situation and I want to do my part to help by looking into partnering and creating new things."

Benh Mi. 1436 Washington Ave., Miami Beach (in the Esmé Miami Beach); instagram.com/benhmi_. Slated to open February 2021.
KEEP MIAMI NEW TIMES FREE... Since we started Miami New Times, it has been defined as the free, independent voice of Miami, and we'd like to keep it that way. With local media under siege, it's more important than ever for us to rally support behind funding our local journalism. You can help by participating in our "I Support" program, allowing us to keep offering readers access to our incisive coverage of local news, food and culture with no paywalls.
Make a one-time donation today for as little as $1.
Juliana Accioly
Contact: Juliana Accioly