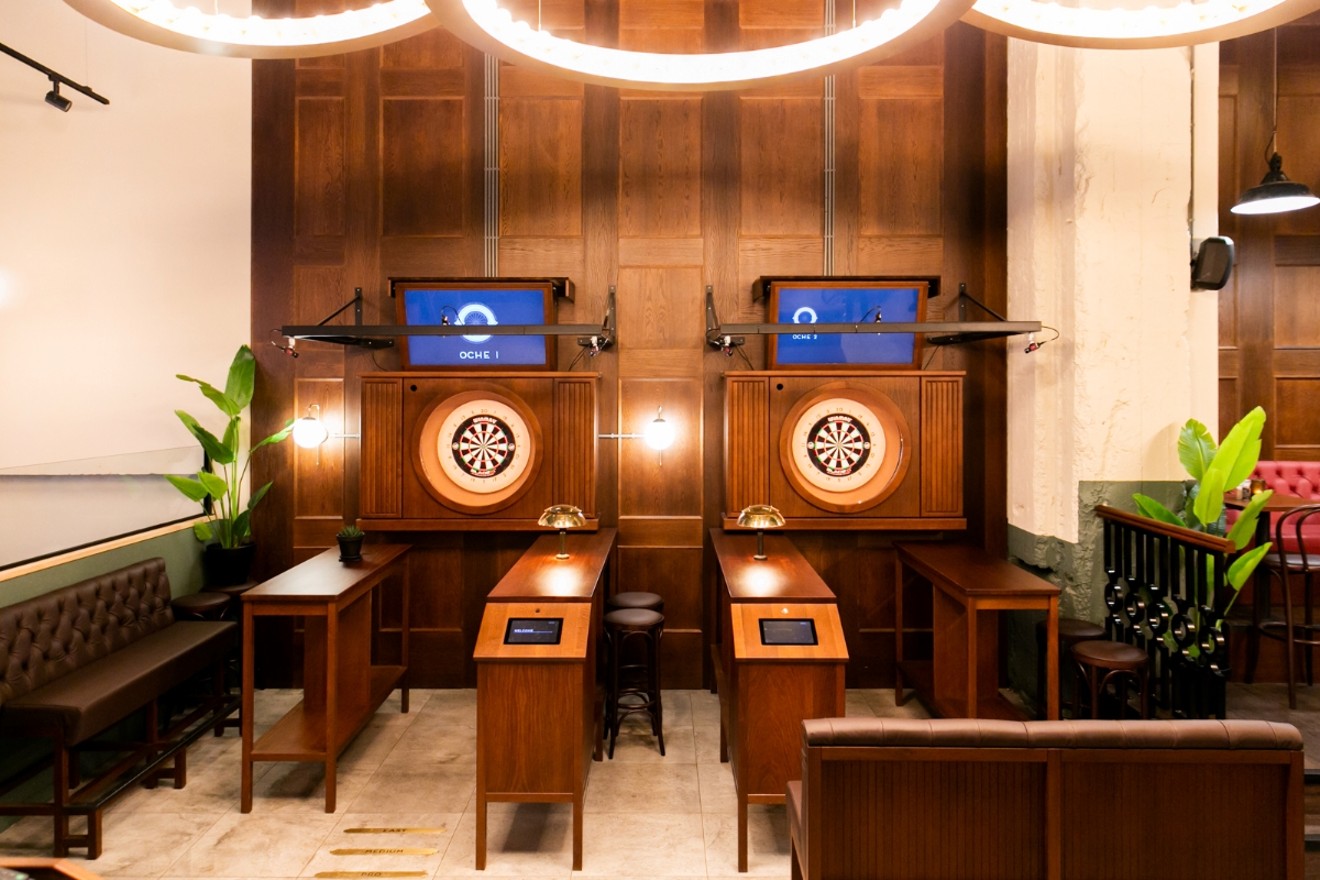 High-tech dart boards at Oche. Photo courtesy of Oche
If you didn't grow up with a basement rec room or spend time in a frat house in college, you might only be familiar with dart-throwing as a way to demolish balloons at the annual Dade County Youth Fair.

The pastime, a European pub staple, is the perfect test of skill while hoisting a pint: so simple that anyone can play on the first go-round, but demanding enough to become a lifelong pursuit of excellence.

Miamians will soon have their turn with a new twist on darts when Oche (pronounced like "hockey" without the h) opens in South Beach. The European pub and dart hall, which takes its name from the line you stand behind when throwing darts, will debut its first U.S. location in the coming weeks.

The first Oche opened in Oslo, Norway, in 2018. The following year, a second location opened in Brisbane, Australia. A third Oche opened in Amsterdam before COVID locked down the world, and number four recently opened in Gothenburg, Sweden. Now the dart-hall chain is set to hop across the pond. (A different company, London-based Flight Club, introduced a similar concept that now operates in Boston and Chicago.)

Oche Miami Beach president Gilles Gillesen wants Miamians to think of Oche as "gastro gaming."  Says Gillesen: "We're trying to elevate the whole experience. A lot of times people don't expect food to be very high-end at a place that also offers an activity. We spent a lot of time to over-deliver on food."

Oche will be divided into two different areas. The first is a sit-down restaurant offering a menu created by executive chef Niels van Halen, who formerly worked at the Michelin-starred De Hoefslag in the Netherlands. Items include tamarind-glazed short ribs ($22), a Wagyu burger ($18), and grilled Norwegian salmon ($26).

In the dart-booth area, the menu will offer more casual fare, including pizzas, sliders, and crab cakes.

If the last time you played darts was at a frat party or on an electronic board in a dingy dive bar, don't worry, Gillesen says: Oche welcomes everyone from beginner to expert.

The games, too, differ from old-school mainstays like 501 and Cricket. Here, steel-tipped darts are used, as is a regulation dartboard, but games have been simplified and each dart "lane" offers three oche lines to level the playing field for newbies or kids — children are welcome in the daytime and early evening hours — and the dartboards are equipped with cameras that pinpoint exactly where your dart landed. Computers tally the scores automatically.

Think bowling, only with pointy missiles.

Gillesen, who admits he's no darts champion, says the game is fun for one and all. "It's easy for everyone to participate. If some has never thrown a dart in their life, we'll help them get started," he adds.

Miami Beach is only the first of several Oche openings planned for U.S. shores. Three additional locations are on the calendar for the next year or so.

So far, there's no set date for the opening of Oche Miami Beach, though it's expected that Miamians can begin playing Highstriker, Killer, Hoggern, and 201 within the next few weeks.

Oche. 200 S. Pointe Dr., Miami Beach; oche.com; Opening July 2021.
KEEP MIAMI NEW TIMES FREE... Since we started Miami New Times, it has been defined as the free, independent voice of Miami, and we'd like to keep it that way. With local media under siege, it's more important than ever for us to rally support behind funding our local journalism. You can help by participating in our "I Support" program, allowing us to keep offering readers access to our incisive coverage of local news, food and culture with no paywalls.
Make a one-time donation today for as little as $1.