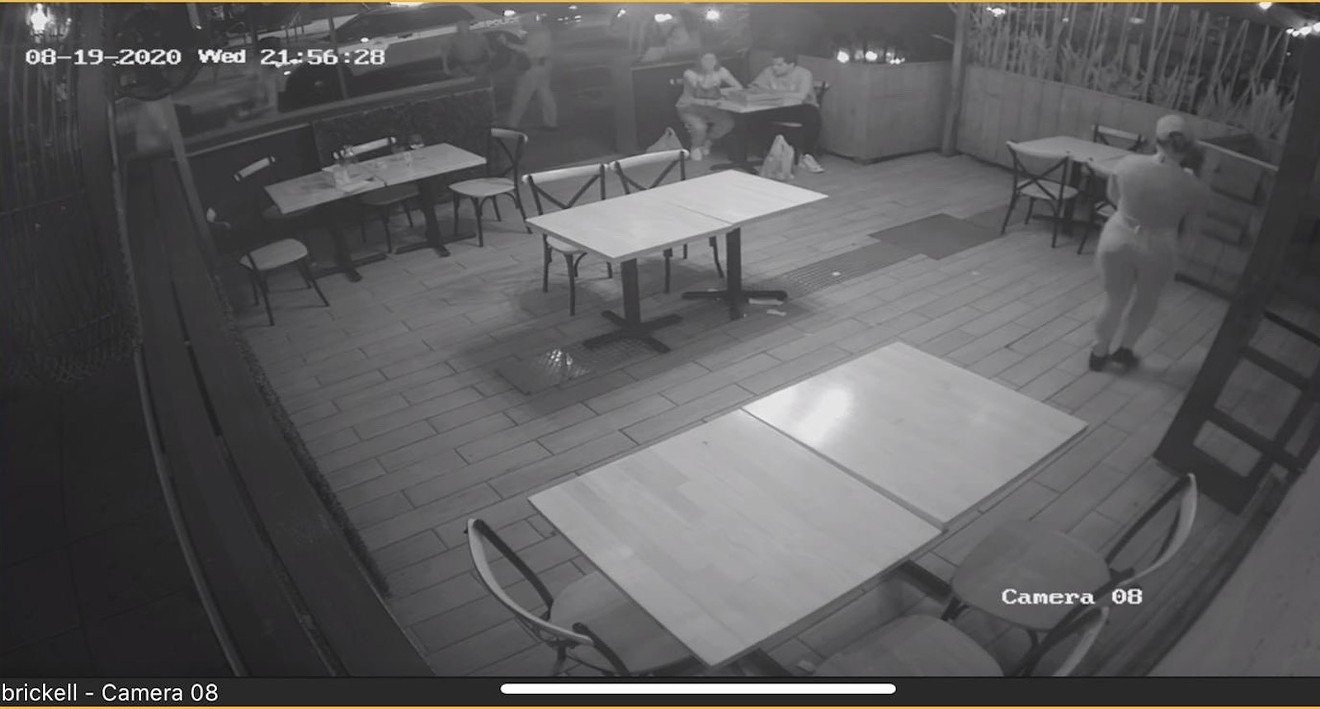 Six minutes after this screenshot, Miami police cited Mister O1 $500 and ordered the pizzeria to close for 24 hours. Umberto Mascagni / Mister O1 Extraordinary Pizza
The Miami restaurant industry continues to reel since coronavirus brought about mandatory lockdowns and a 10 p.m. curfew. The rules for wearing masks, sanitizing, and social-distancing are continually evolving, and many restaurant owners are justly frustrated.

Some are finding the restrictions to be unjustly enforced.

One of those is Umberto Mascagni, owner of Mister O1 Extraordinary Pizza, who says he was recently fined and punished for not following curfew procedure at his Brickell store.

Mascagni says his routine shutdown procedures took a different route than usual on Wednesday, August 19, when the last two customers of the evening took several extra minutes to pay their bill. All service operations had ceased, and there were no additional customers on the premises, either inside or outside, he says.

"We asked them to hurry up because we were getting close to 10 p.m.," Mascagni says. "[As they] were leaving, the police walked in. These are the same officers that come by every night. They see us following the rules, and the one day we have customers inside a few minutes late, we get penalized." The citation was issued at 10:02 p.m.
Umberto Mascagni / Mister O1 Extraordinary Pizza
Mascagni says the two tardily departing customers exited the restaurant at 10:02 p.m., just as the two Miami police officers entered. The Brickell restaurant, which employs ten people, was hit with a $500 fine and a citation requiring the restaurant close for 24 hours. The ticket stated that the two patrons were "consuming wine past curfew."

Apparently, officers did not cite the lollygagging customers for breaking curfew.

The $500 fine and 24-hour closure penalty are for a first or second offense, says Miami Police Department Assistant Chief Manny Morales, who has just under 40 officers working to enforce the mandates, which were set by Miami-Dade County Mayor Carlos A. Gimenez.

Under the county's Emergency Order 27-20, issued in early July, all nonessential businesses must cease operations from 10 p.m. each night through 6 a.m. the following morning. In addition to the fine and closure, violators may be sentenced to up to 180 days in the county jail.

This was the first offense at any of Mascagni's three locations. Mascagni says he is disappointed the incident didn't simply trigger a warning.

"We understand the rules, and it's important to follow them. But this is ridiculous," Mascagni says. "We hear other Brickell businesses have had similar experiences. For us, we have been following rules and safety procedures from day one. This will not only cost us $500 but, more importantly, to be closed in a difficult time like this — this will cause damage to us, but more importantly, to our employees, who will lose hours of work to support their families."
KEEP MIAMI NEW TIMES FREE... Since we started Miami New Times, it has been defined as the free, independent voice of Miami, and we'd like to keep it that way. With local media under siege, it's more important than ever for us to rally support behind funding our local journalism. You can help by participating in our "I Support" program, allowing us to keep offering readers access to our incisive coverage of local news, food and culture with no paywalls.
Make a one-time donation today for as little as $1.