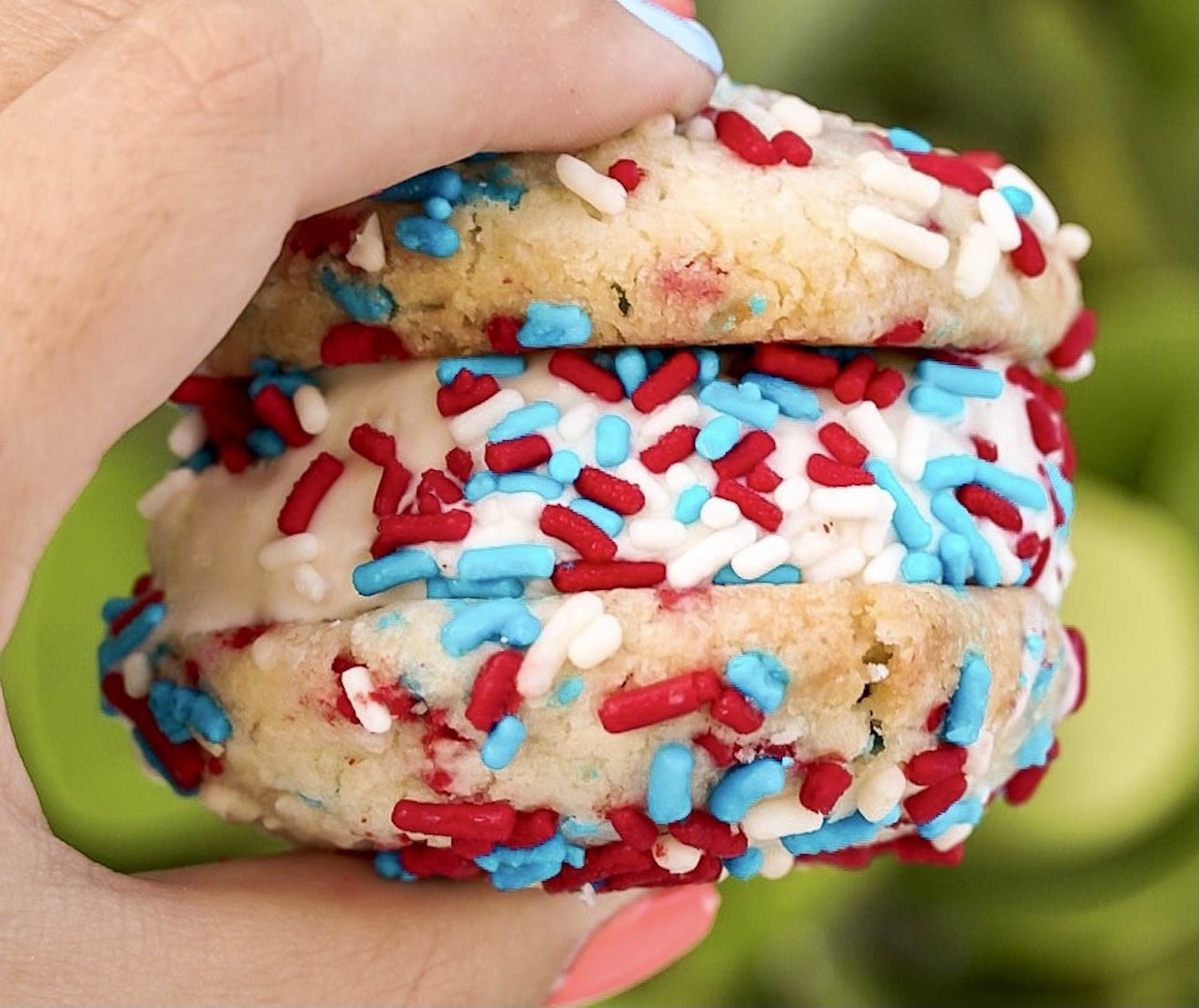 An ice cream sandwich from Wynwood Parlor. Photo courtesy of Wynwood Parlor
Happy July Fourth weekend! Restaurants and bars will host celebratory food and drink events, including the Clevelander and Time Out Market Miami. Plus, the Butcher Shop celebrates its eighth anniversary, Fireman Derek offers a sneak peek of its new space, and Drinking Pig BBQ pops up in Wynwood.

Father-and-son team Igor and Fred Niznik celebrate eight years of the Butcher Shop Beer Garden and Grill in Wynwood on Friday (today). Complimentary beer by Veza Sur will be served to the first hundred guests after 3 p.m. Then, from 7 to 9 p.m., guests can enjoy complimentary shooters of Ojo del Sol tequila palomas, Tromba tequila margaritas, and passed bites highlighting some of the restaurant's new menu items. An extended happy hour will also run from 3 to 9 p.m. New menu items include the "Double Double" burger stuffed with aged cheddar, cheese sauce, and smoked bacon; smoked St. Louis-style ribs served with cornbread and ranch slaw; and a smoked meats board, with mojo pork, brisket, and chicken. Beginning at 3 p.m. Friday, July 2, at the Butcher Shop Beer Garden and Grill, 165 NW 23rd St., Miami; 305-846-9120; butchershopbeergarden.com.

"Drinkin on Lincoln" at YesJuice

YesJuice, the South Beach café from Miami-based entrepreneur YesJulz, is behind a new Friday evening happy hour, "Drinkin on Lincoln." On Fridays from 5 to 7 p.m., YesJuice offers a slate of buy one, get one free cocktails. Highlights include the "Never Drinking Again," made with rum, pineapple, and coconut water; the "Pay Attention," with Cîroc Summer Citrus vodka, pineapple, strawberry, apple, ginger, and lime; and the "Let's Gooo!" with tequila, grapefruit, orange, pineapple, ginger, and lime. 5 to 7 p.m. Fridays, at YesJuice inside Showfields, 530 Lincoln Rd., Miami Beach; yesjuice.co.

Celebrate July Fourth weekend in Wynwood with a pop-up featuring two of Miami’s biggest names in barbecue and baking: Chef Raheem Sealey of Drinking Pig BBQ and Kyu; and Derek Kaplan of Fireman Derek’s Bake Shop (FDBS). Drinking Pig BBQ will set up shop inside Fireman Derek’s former bakeshop space, slinging brisket, pulled pork, ribs, and chicken along with a selection of sides. In addition, Fireman Derek's founder Derek Kaplan will offer a sneak peek of his new 2,000-square-foot store (2545 N. Miami Ave., Miami), as well as launch his newest seasonal offering: strawberry shortcake and cream pie. Noon until sold out on Saturday, July 3 and Sunday, July 4, at 2818 N. Miami Ave., Miami; instagram.com/drinkingpigbbq. The sneak peek will be open from 9 a.m. to 11 p.m. on both days.

Inside Tran An in Little River.
Photo via Tran An

Dad Bod BBQ at Tran An

Parades and fireworks are two of the ways Miamians enjoy celebrating America's independence. Local bars and restaurants are also hosting their own roster of Fourth of July specials — from patriotic menus to cookouts and fun activations — that you can take advantage of. Here, listed in alphabetical order, find Miami venues offering something special to help you celebrate America's independence. Some events take place during the long holiday weekend, so check dates and times for each event.
KEEP MIAMI NEW TIMES FREE... Since we started Miami New Times, it has been defined as the free, independent voice of Miami, and we'd like to keep it that way. With local media under siege, it's more important than ever for us to rally support behind funding our local journalism. You can help by participating in our "I Support" program, allowing us to keep offering readers access to our incisive coverage of local news, food and culture with no paywalls.
Make a one-time donation today for as little as $1.