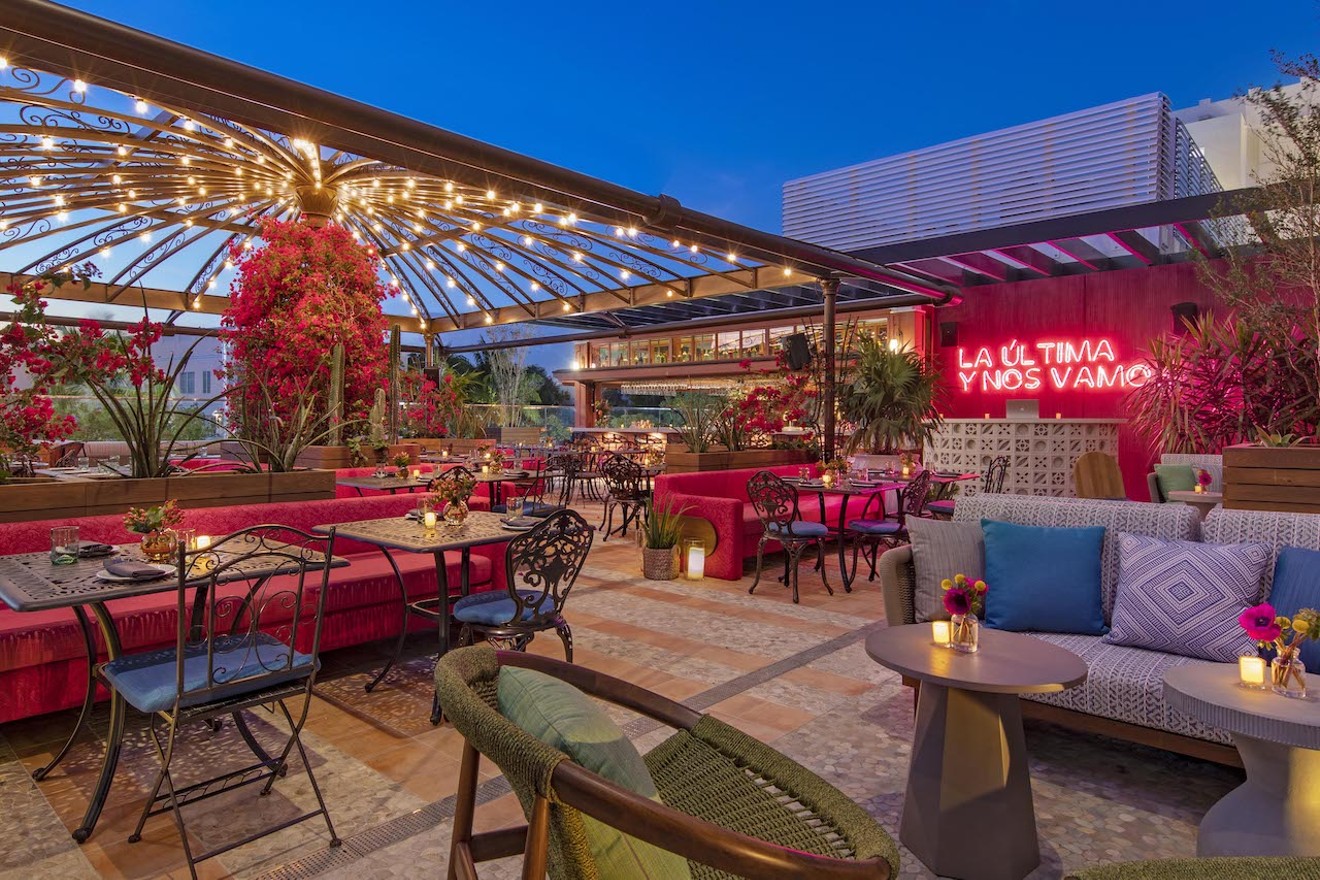 Marriott’s millennial-focused brand, which to date numbers more than 70 properties across North America, Europe, and Asia Pacific, debuted at 915 Washington Avenue in February with an eight-story, 202-room hotel with two swimming pools, a fitness center with an outdoor gym, and the nearby Moxy Beach Club.

"The project was originally conceived about five years ago when the space consisted of a few low-rise retail buildings along Washington Avenue," Mitchell Hochberg, president of Lightstone, the developer behind the project, tells New Times. "We were able to preserve the original 1930s Art Deco storefronts while adding an entirely modern building above, offering all of the benefits of a new build with the history and culture of the historic structures."

Drawing on Mexican, Caribbean, and local flavors, the hotel's food and beverage programs are overseen by Sven Vogtland and Alan Drummond, cofounders of Coyo Taco and the 1-800-Lucky Asian food hall in Wynwood.

"We saw an opportunity to bring a breath of unique experiences to Miami Beach, all under one roof," says Hochberg. "We met with dozens of potential partners in search of a group that would create not only great food, but more importantly experiences that you can’t find anywhere else in Miami. As soon as we met the Coyo Taco Group, we knew they were perfect. The creative talents behind the group infuse a true culinary authenticity, global perspective, and youthful energy across all of their concepts."

Situated in the lobby near the check-in, Bar Moxy anchors the hotel's vibe with a cocktail list and an installation that displays the phone number for El Floridita, Hemingway's favorite Havana watering hole. Across from the bar is Los Buenos, an all-day bodega and taco stand that serves up tacos made with hand-pressed tortillas, as well as burrito bowls, breakfast items, and coffee drinks.

On the second-floor rooftop, Serena offers a full menu of shareable plates including aguachile (a shrimp ceviche that originated in western Mexico), grilled cactus and shrimp, and an uni and crab tostada. A short distance away, a cabana-lined pool features a, see-through cutout at the bottom that provides a view of the lobby (and vice versa).

“I always say that I’m a gringo on the outside, but my heart is Mexican,” Linquist says. “I’ve traveled all across Mexico to study the characteristics of each region’s cuisine.”

The Upside, the hotel’s eighth-floor rooftop bar, is reserved for hotel guests, who can enjoy signature drinks while lounging in a shallow pool or viewing a movie in an alfresco screening area surrounded by panoramic views.

Two concepts are still in the works. Como Como is a raw bar with a menu that will also make use of a wood- and charcoal-fired grill, while the dimly lit Mezcalista lounge will offer 100 types of rare mezcals and tequilas. Both are slated to open this month.

Moxy Miami South Beach. 915 Washington Ave., Miami Beach; 305-600-4292; moxysouthbeach.com.
KEEP MIAMI NEW TIMES FREE... Since we started Miami New Times, it has been defined as the free, independent voice of Miami, and we'd like to keep it that way. With local media under siege, it's more important than ever for us to rally support behind funding our local journalism. You can help by participating in our "I Support" program, allowing us to keep offering readers access to our incisive coverage of local news, food and culture with no paywalls.
Make a one-time donation today for as little as $1.
Juliana Accioly
Contact: Juliana Accioly