Here's What to Expect at David Grutman's Firestone Garage

The oversized bar at Winker's Diner. Photo by Laine Doss
David Grutman's trifecta of restaurants at the former Firestone Garage on 16th Street and Alton Road in South Beach will finally open this Friday, September 3, after three years of planning.

Three distinct concepts will share the same footprint underneath the Firestone sign that has greeted tourists to Miami Beach for nearly a century.

Sushi Fly Chicken, Winker's Diner, and Toothfairy each has a separate kitchen. That's not to say that they don't complement one another for those in search of an exploratory evening out.

Grutman tells New Times that the restaurants were designed to be affordable, accessible, and fun.


"I need to have spaces that people can come to three or four times a week," he says.

The founder of Groot Hospitality says he was happy to give new life to the old Firestone Garage space, which dates back to the 1930s but hasn't been in use as a tire shop since 2015.

"I love iconic, heritage stuff. The building is art deco and just feels like a representation of everything Miami Beach to me. To take a building that maybe saw its final days and give it a new life is very cool," says Grutman.

The Firestone sign, by the way, remains up thanks to a no-fee leasing deal with Bridgestone, Firestone Tire and Rubber's corporate parent since 1988. Grutman explains that the City of Miami Beach asked that the iconic Firestone sign remain and Bridgestone agreed to a deal that would retain the brand's intellectual property. "The building has been branded Firestone for over half a century and we're not taking that away," Grutman says, adding that he remembers stopping at the garage to get a flat fixed when he was younger and struggling to make it in Miami.

The bar at Sushi Fly Chicken.
Photo by Laine Doss
Sushi Fly Chicken is a dark room brightened by Japanese whisky bottles and anime characters. Chyrons at the bar flash what look to be Tokyo Stock Exchange figures, while large screens play Japanese martial arts movies. Though a menu and pricing aren't yet available, Grutman says to expect sushi, fried chicken, dumplings, and other bites, describing the izakaya-style menu as "elevated to another level." 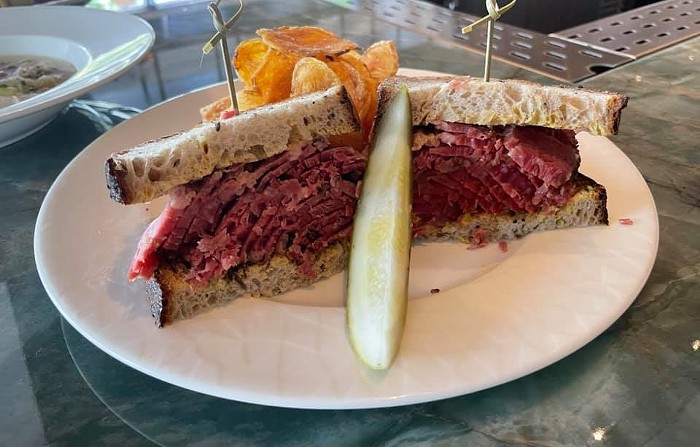 Pastrami on rye at Winker's Diner.
Photo by Laine Doss
Winker's Diner is the largest of the three concepts at Firestone. Grutman says he always wanted to run a diner — on his own terms. The décor might best be described as an upscale version of the Woolworth lunch counters of the 1950s. Decorated in greens, pinks, and blues, the space is outfitted with teal banquettes and a U-shaped bar. Winker's will serve deli-meets-diner fare, including pastrami on rye, a French-onion grilled cheese, a prime rib that looks as though it could feed a family of four, and breakfast all day long. Of course, this being a Groot Hospitality diner, a full bar is available and a DJ will spin tunes all night.

Cakes at Toothfairy.
Photo by Laine Doss
For Toothfairy, Grutman has partnered with pastry chef Dallas Wynne. This small confection of a bakeshop boasts a display case filled with cakes in a rainbow of colors and flavors, inviting your inner child to sample everything from handmade Twinkies and whoopie pies to a blue "Cookie Monster" cake. Toothfairy also offers soft-serve ice cream. Wynne is responsible for the desserts at Winker's and Sushi Fly, as well. Says Grutman: "She's killing it."

Alton Road is having a moment. The Kimpton Palomar, Trader Joe's, and new development projects are bringing renewed interest to a part of South Beach once reserved for locals.

"This corner is a very special corner," Grutman asserts. "You have Bodega across the street, new development coming, and the McDonald's that we all went to for some late-night nourishment."


He wants Firestone to be part of a renewal of Alton Road — and a one-stop night out in the making.

"I love hopping around, and here you can hop to three different places," he says. "You can get cocktails and sushi at Sushi Fly, have a prime rib dinner at Winker's, and get some cookies at Toothfairy."

Sushi Fly Chicken, Winker's Diner, and Toothfairy. 1575 Alton Rd., Miami Beach; sushiflychicken.com; winkersdiner.com; toothfairybakery.com. Opens Friday, September 3. (Operating hours not yet available.)
KEEP MIAMI NEW TIMES FREE... Since we started Miami New Times, it has been defined as the free, independent voice of Miami, and we'd like to keep it that way. With local media under siege, it's more important than ever for us to rally support behind funding our local journalism. You can help by participating in our "I Support" program, allowing us to keep offering readers access to our incisive coverage of local news, food and culture with no paywalls.
Make a one-time donation today for as little as $1.